If you're a vegan in New Jersey, chances are you've heard of Tacoria Mexican Street Kitchen. Similar, in theory, to fast casual Mexican chains, the Tacoria flagship opened in New Brunswick a couple of years ago and has since opened two more locations with a fourth impending. 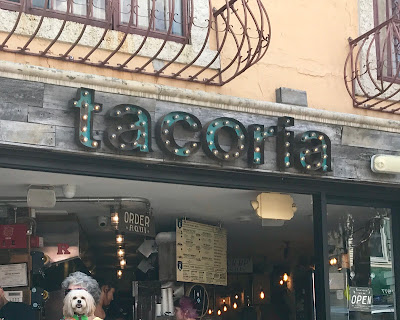 While I immediately admired their signage from afar (it's cool!), I had no idea it was a vegan-friendly establishment until a friend visited the (extraordinarily loud) Princeton location and reported back that they have a separate vegan menu; I immediately put it on my short-list to patronize.

Behold said separate vegan menu (scroll down if you follow the link): 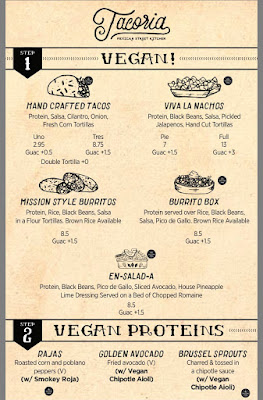 I hadn't originally given it much thought, but BYOL observed that it's an interesting choice for the vegan "proteins" not to include more standard tofu/tempeh/seitan/bean options. Yes, we know vegetables contain protein; it's just an interesting take on the "vegan protein" issue. More on the menu options later.

Full disclosure: our first visit began with disappointment because, while the New Brunswick location has outdoor seating, dogs aren't allowed because you can only access the area by walking through the interior of the restaurant. Understandable, but regrettable. So, we got take-out:

VM liked this way more than I did; mainly I was perturbed because it was predominantly halved Brussels sprouts with pico atop five giant pieces of lettuce and no discernible dressing. I'd really been looking forward to that pineapple lime; if it was there, I didn't taste it. It's possible that the extremely flavorful sprouts overshadowed it, but it seems doubtful since the lettuce leaves were basically dry. The cilantro in the pico wasn't a dealbreaker, and the avocado was a nice touch: generous enough that you needn't add guac (additional $$); overall, it just wasn't what I'd describe as a salad. I'd recommend, especially in light of the recent resurgence in popularity of chopped salads, that the lettuce be torn smaller and the sprouts be shredded. 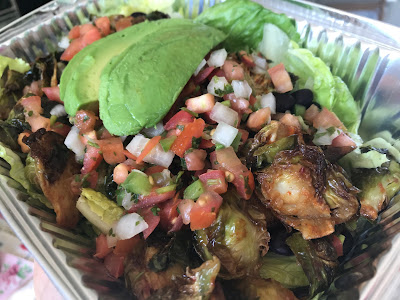 Next up we ordered the viva la nachos: hand cut tortillas black beans, sliced pickled jalapenos, and your choice of protein; we went with the golden avocado: fried avocado with vegan chipotle aioli. SIGH. Okay, so we got this home and I was confused because: 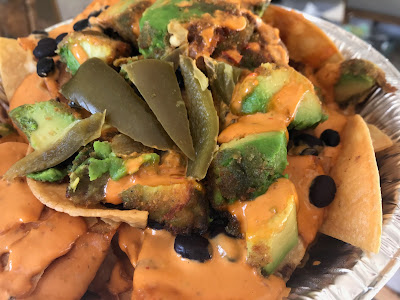 Mexican Street Corn wasn't on the vegan menu,* but the person taking my order kindly offered to veganize it and I was so excited that I forgot to say NO CILANTRO. Luckily, it was easy to remove the giant leaves and then it was basically just corn smothered in vegan aoili. Undeniably good, but I recognize that I probably don't need to consume that much aioli; that's on me. 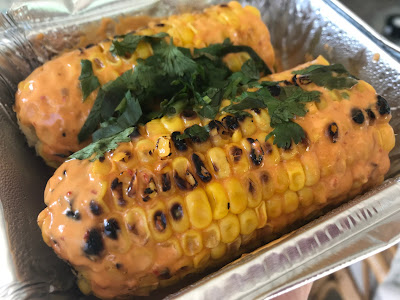 Because I wanted to try all three "proteins," and certainly not because we needed more food (although ultimately we did because of the nacho snafu), I ordered the mission style burrito: rice, black beans, salsa in a flour tortilla with rajas: roasted corn and poblano peppers with smokey roja. This was definitely my favorite item ordered; it was on the dry side, but the ingredients were perfectly proportioned to each other and throughout the burrito, which had been assembled and sealed with extraordinary neatness (I'm looking at you, messy Chipotle). 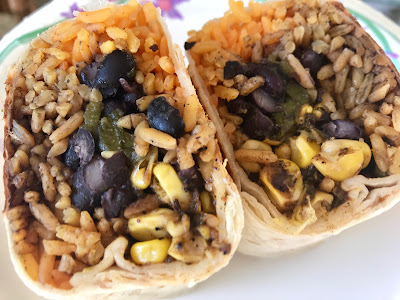 I enjoyed it so much so that, a few weeks later, we returned to try the burrito with the Brussel Sprouts and added guacamole. The beans were a little more saucy this second time around but, once again, I think this menu item would benefit from the sprouts being shredded. 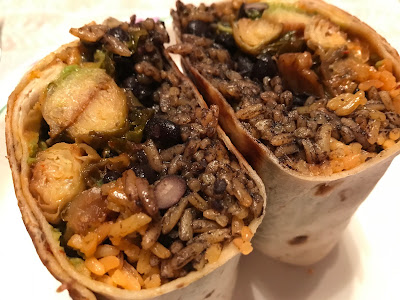 Overall, I'm really happy such a mainstream chain has an entire vegan menu instead of  secretly/accidentally vegan menu items/substitutions that only vegans are aware of through an underground, food-sharing, word-of-mouth, social media community. That being said, I think they could benefit from a few changes/additions. In addition to those I've cited above, it would be great if they could take their menu up a notch by offering vegan dairy substitutions, like cheese and sour cream, that seem to have become relatively ubiquitous in vegan/non-vegan establishments. In the meantime, I'll continue to get takeout and add my own.
Posted by Abby Bean at 11:20 AM 3 comments: