As you know (because I told you; duh), The Cinnamon Snail opened a FiDi location on Friday afternoon. I'm sorry to report that it took me until Sunday morning to FINALLY check it out, but it was well worth the long, arduous wait. I'll get into all the details of the new space in a minute, but I want to start by saying that it is of the utmost importance that you stop whatever it is that you are doing and get to City Acres Market RIGHT NOW in order to get your hands on the exclusive, exalted, Cambodian Crispy Tofu sandwich of your every-loving DREAMS (patent pending)!!! 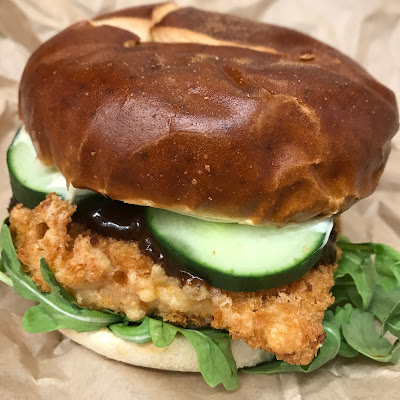 Stonehenge, crop circles, Cinnamon Snail Cambodian crispy tofu: all unexplained phenomena that must settle for adulation because their mysteries will never be solved. HOW DO THEY DO IT? Such a behemoth, succulent, firm slice of tofu encased in the tastiest perfection of crispiness without so much as a hint of sogginess, oil, or grease. IT IS A MASTERPIECE OF EPIC PROPORTION. Crowned with a combination of sweet, salty, and spicy accoutrements: every mouthful is wondrous. LOVED the bite of the wasabi mayo and the crunch of the cukes and peanuts; could have used a smidge (or a pool-full) more of the luscious tamarind plum reduction, which was positively decadent. And, of course, that pillowy pretzel bun deserving of heart-eyes. Not the heart-eye emoji, legit heart eyes all the way. 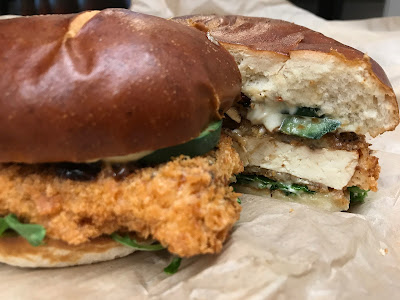 Bear in mind that this is the only Snail location that offers this particular sandwich, as well as other special items you've not seen before. Behold the other sandwiches, inclusive of staunch favorites: 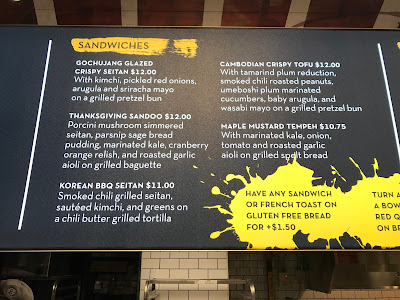 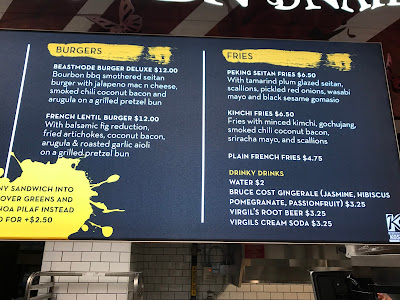 AND, breakfast: served weekday mornings and all day on weekends as nature intended. 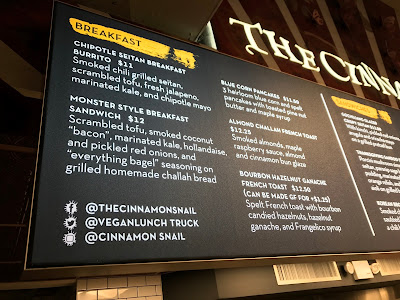 Okay; now that that PSA is out of the way, let me give you some other pro tips. In theory, City Acres Market is located at 70 Pine in the Financial District. 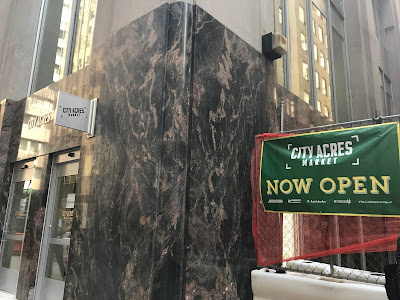 GPS will take you to the entrance...seemingly of a hotel. But, 70 Pine is, in actuality, a single enormous building that faces Pine, Cedar, and Pearl. Much like our beloved Terri has a Maiden Lane address but exists on Pearl Street, City Acres Market has a 70 Pine address, but the entrance, specifically, lies on the corner of Pearl and Cedar. If you didn't know, now you know (I didn't, but apparently this has been confounding peeps for decades. As it turns out, decades ago my family owned a restaurant on the next block over). 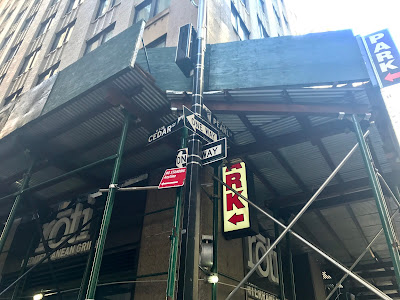 The street level of City Acres Market is food court style: if food courts were clean with bountiful vegan options. Proudly plant-based Beyond Sushi- woot woot!; Juice Brothers; Vanessa's Dumplings; and the City Market deli- just to the right of Snail, offer vegan options. But, let's face it; it's gonna be all Snail all the time for me and the staff of family members I employ to procure and deliver me yummy vegan food from their stomping grounds.

The A-level of City Acres Market is a large food market (get it?), but I admit that between my excitement over the new Snail appearance and my obsession with the Cambodian crispy tofu sandwich (of your every-loving dreams), I didn't even make it down there. But, don't worry; I'll be back. That almond challah French toast is to be the next menu item I conquer... 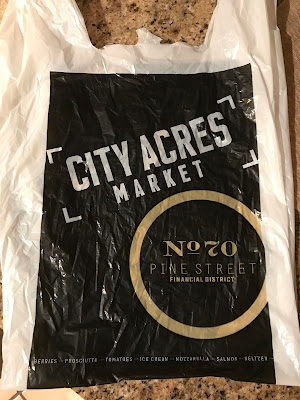 The mighty gem that is The Cinnamon Snail is nonchalantly tucked away in the back left corner of the vendor space- kind of like where supermarkets put the most popular items so that you have to meander through the whole establishment before getting to what you really want. We see you, City Acres Market; we know where your head's at!

While I stood there IMPATIENTLY waiting for my friends to arrive, I watched as Snailiens found their way to their intended destination: faces determined as if on a mission. I also kibitzed with the Snail manager and staff, who were absolute friendly delights of personality and made me feel so much less lonely as I awkwardly stalked the resto in anticipation. 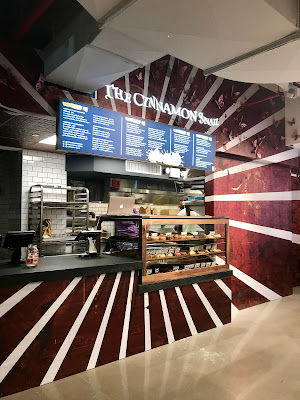 In case you're worried, there are donuts. PLENTY of donuts. Although I wouldn't go so far as to say ENOUGH donuts, because really- what does that even mean; what would that even look like? Probably something like this:

These were our choices: apple cider (mine), meyer lemon twist (not mine), blueberry rhubarb (not mine), and peanut butter chocolate chip cookie dough (MINE!); thanks, John. 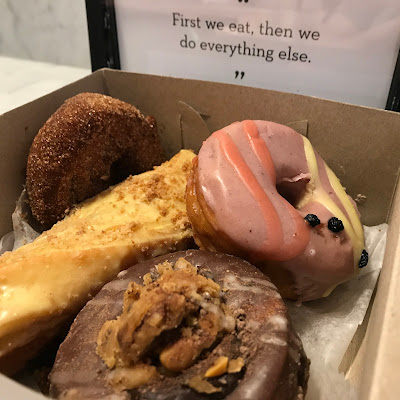 One other thing so you're not surprised on a busy day: as of right now, when you place your food order, you don't actually pay at the vendor; you pay at a "cashier" as you exit the food area that leads to the seating and/or exit. This enables you to shop at multiple vendors and only pay once. DO NOT shove four donuts and the bag they came in into your face before you get to the cashier area. THAT'S BAD FORM!

Okay; that's all I have to say on the subject as of this moment in time. Go forth and eat all the Snaily things!! 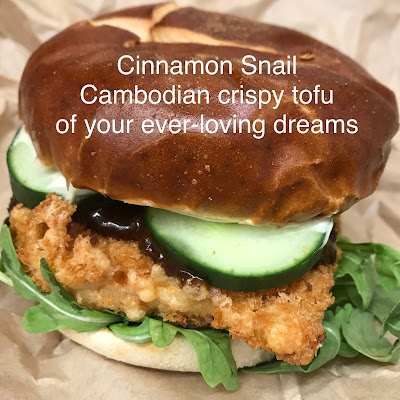