I was really anxious to try Bar Verde, so I was thrilled when a friend planned a holiday din-din there recently. It was a wet, sloshy, slushfest of a day, so obviously our reservation was inside. 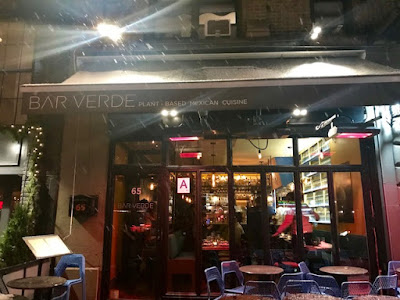 The interior is really beautiful- in what seemed like shades of blue, possibly peacock. It was very dark, though; I knew immediately it would be bad for food photography. Don't get me wrong; I get that living in the ambient moment > IG likes, but I feel like restaurants can find a happy medium. I may look better in dim lighting, but my food sure doesn't.

The cocktail menu, though mezcal heavy, looked quite appealing; I'll definitely need to revisit asap for that alone. I'd just come from Oscar Wilde, so I did not want to have another drink. When I ordered a coke, I was offered the choice between a "regular" coke and an "organic" coke. Because the waiter had a gleam in his eye when he said, "organic," that's what I chose. To my surprise, I was served a literal superior Q Kola- which I highly recommend because it was kind of a cross between a coke and a cream soda. Note: since our server had a great sense of humor about the organic coke, I figured it was going to be a fun night AND IT WAS. 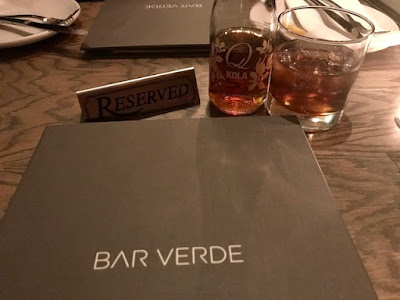 The menu is extraordinarily appealing; there were so many things we wanted to try.

We started out with a few appetizers from the "share" portion of the menu. Because we're professionals, two orders of nachos: butternut queso, black beans, pico de gallo, cashew crema, guacamole, jalapeno, (watermelon) radish. This cheese wasn't the best I've ever had, but it was pretty damn great. The proportion and distribution of toppings to chips was almost perfect and the chips remained crisp throughout. I especially appreciated that both the cilantro (worst) and the jalapeno (best) were easy to remove/hoard instead of being hidden throughout and within in tiny dices.


A friend had the elote: grilled corn, chipotle crema, arbol chile, almond cotija, grilled lime; it looked really great and I heard no complaints. My guess is he's already recreated it in his own kitchen because that's how he rolls. 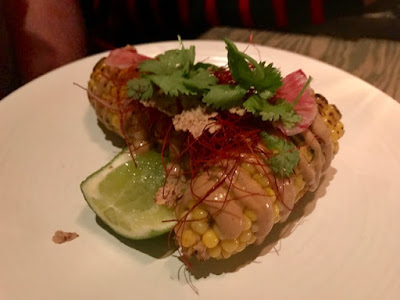 I also shared the smoked potato croquetta: lime cashew sour cream, cacao mole, avocado, pickled jalapeno; it was kind of like deep fried mashed potatoes, but elevated. The thing that made this dish was the varying textures: crisp, creamy, and viscous. I'm not usually a fan of mole, but this was really delicious- particularly mixed with the other sauces. I wouldn't necessarily order this again, but I have nothing bad to say about it. 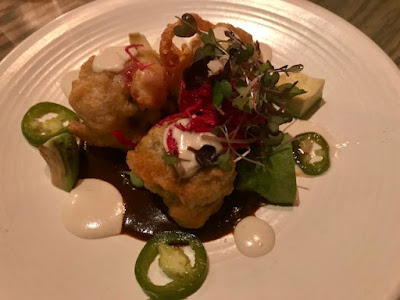 For dinner I chose the truffle potato flautas with huitlacoche, avocado, marinated kale from the "not tacos" section of the menu. It was kind of small for an entree; I certainly couldn't have eaten just this for dinner and been satiated. Perhaps it was meant to be like a larger plate, not necessarily an entree? That part is a little confusing. To order 2 items from the tacos/not tacos portions of the menu seems overkill, but 1 just under enough even with an app. It was really good; the exterior was crisp and the contents creamy with a taste resembling black beans, although I think that was the huitlacoche. The kale was really exquisite, but the the slices of avocado between the flautas and the kale made the whole dish kind of unnecessarily compact. I think I would have preferred if the kale were served alongside as a salad of sorts topped with the avocado; then the dish would have both appeared larger and would have been cohesive rather than layered. 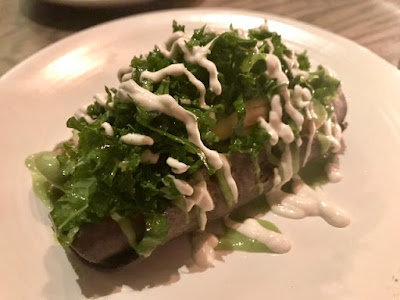 A friend had the grilled quesadilla with spicy cashew cheese, tomato salsa, salsa verde, flour tortilla. She really liked them. Correction: she LOVED them and "everything else she had." I would have thought plain cheese quesadillas would be boring, but she was definitely not disappointed in the least. 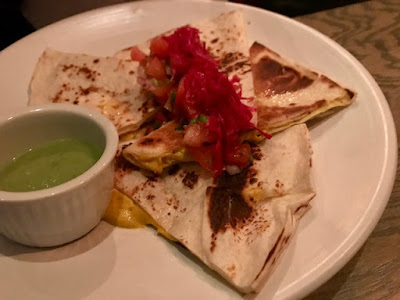 Two friends each had the classic BV burrito: rice refried beans, guacamole, lettuc, salsa fresca, cashew crema. They didn't look too exciting to me and I was warned that the sauce was pretty much pure cilantro, so this one won't be on my must order list. 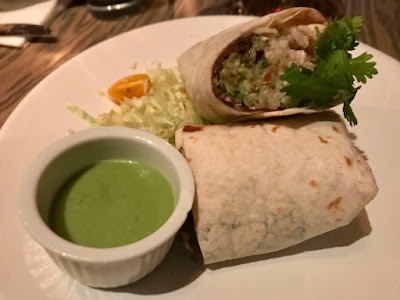 The wild mushroom tamale with mole, cashew crema, salsa verde was probably the smallest of the entrees. Again, we don't even really know if they were supposed to be entrees. To recap, we ordered from the "share" section of the menu as appetizers and then from the "tacos"/"not tacos" as entrees, but it could be that everything was supposed to be tapas style? TBH, we all steered clear of the taco section of the menu because we assumed they'd be very small entrees. In a perfect world, I'd love to see a mix and match option such as "choose any three" served in a, wait for it, partitioned plate! 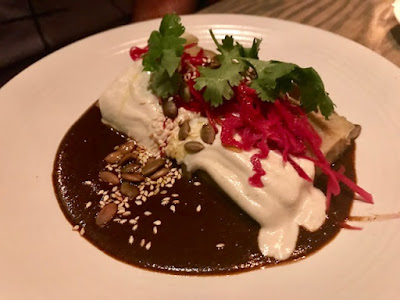 For the table, dessert #1: mango cheesecake. The crust was the most impressive factor: very nutty. The "cheesecake" had a nice flavor (not overly mango-y), but was not dense enough to be considered the texture of a cheesecake by any means. I didn't try the dollops because I don't love mango and I figured that's where the flavor would be the most concentrated; others enjoyed, but weren't blown away. 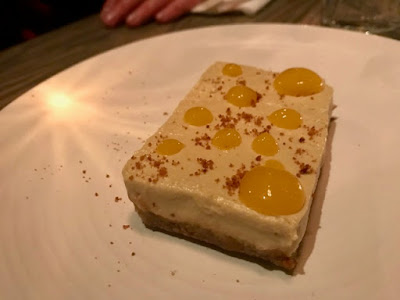 I'd waited the whole meal for our dessert #2, the churros + chocolate. I *think* the waiter threw in an extra churro because he knew I was really resistant to sharing with my tablemates. The chocolate was a dip of medium-thickness; some of my friends had expected it to be an accompanying drinking chocolate and, taste-wise, it was definitely reminiscent. As for the churros...sigh. The ends and edges were crisp, cinnamon sugar deliciousness. The inside may as well have been mashed potatoes; it was so mushy/undercooked. 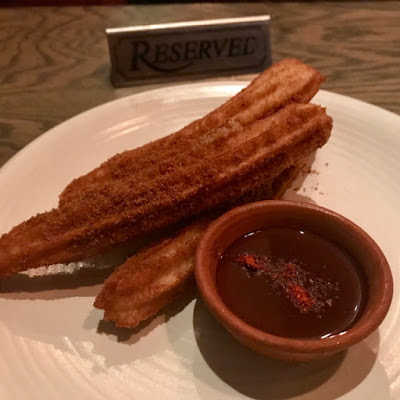 Overall, we really enjoyed Bar Verde. The space was beautiful, the service was terrific (I love a personality and a sense of humor!), the food was great, and I'd even give the churros another go in case this was an off day. However, if there's an ideal ordering method I should know about, I'm open to suggestions.
Posted by Abby Bean at 1:01 PM