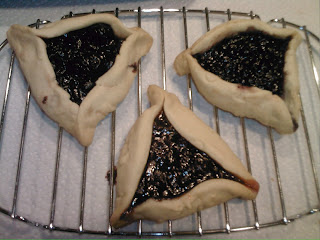 So one day I'm minding my own business when Isa tweets something about a hamantaschen recipe.  Well, I guess lots of folks replied requesting the specifics because the next thing I knew she tweeted a link.  Since I usually have considerable luck following the recipes in Isa and Terry's cookbooks, I printed the "friend's" recipe and decided to try it out.

I followed everything exactly and even doubled the recipe because I figured if I was taking out the rolling pin, I wanted to wind up with more than a dozen cookies.

Right off the bat there were issues.  For one, I needed lots of extra flour handy for the dough, the cutting board, and the rolling pin.  Without it the dough was an unmanageable ball of stickiness.

Next, it seems that my martini glasses must be much larger than those belonging to the recipe's author, because my doubled ingredients somehow still managed to yield only the 12 cookies promised by a single batch.  Kind of disappointing when you are expecting at least two dozen.

But really, all of these setbacks are neither here nor there.  Look at my yummy hamantaschen.  Obviously homemade, but a respectable effort.  Unfortunately, the rest of the batch looked like this: The Hamantaschen Massacre (insert creepy music). 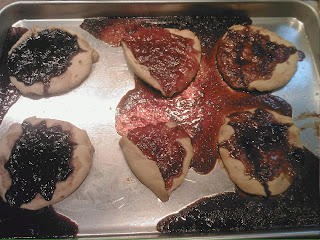 What happened?!  I honestly don't know.  Is there some secret to corner pinching that was left out of the recipe?  And, if so, why did a few survive intact if not only to taunt me?

Ultimately I wound up with three authentic hamantaschen, a hamantaschen omelette, quite a few hamantaschen pizzas, and an epic mess to scrape off of my baking sheet (silicone scraper to the rescue).

I will note that the intact cookies were delicious, but I hold too much of a grudge against the failures to give them much credit (not that I won't eat them cuz I so will).
Posted by Abby Bean at 5:03 PM