Sweet & Sara Continues to Be Fabulous 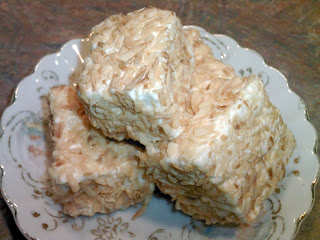 I love dessert, but it's also important to note that I am a sucker for efficiency.  You'd think the one thing would have nothing to do with the other, but Sweet & Sara seamlessly combines the two with service and product that borders on incredible.  Okay, it doesn't border; it is.

Let's start with the goods.  I discovered Sweet & Sara marshmallows years ago when I spied her toasted coconut covered variety and couldn't believe my eyes.  I had been a fan of the non-vegan version that comes out every Passover, and it was high on my list of things I'd been missing as a vegan (yes, that list was all dessert and cheese; don't judge me-- I've been vegan a long time!).  I excitedly bought a box and presented it at my family's multi-denominational seder; it was a huge hit with vegans, vegetarians, and omnis and we all agreed that it wasn't simply a toasted coconut covered marshmallow, but rather dessert.  So yum, yum, I kept stuffing my face with them, the regular version ("plain" vanilla), and the smores: regular and peanut butter, when all of a sudden that sneaky, talented Sara comes out with MORE marshmallow flavors: strawberry & cinnamon pecan; is there no end to her genius?  No, no there is not.  Because then came the highly revered Rocky Road Bark, the chocolate-loving mother of all vegan "chocolate bars".  If you love chocolate, this is the bar for you.  It is a thick chunk of sweet, dark chocolate packed to the brim with fluffy vanilla marshmallows and toasted almonds: overall, one of the few chocolate desserts that I find sufficiently chocolatey. 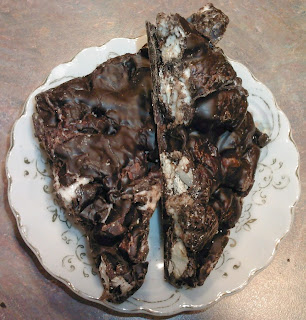 Now on to the service.  I usually buy my marshmallows at Pangea, or get my fix at Lula's as a topping or within rocky road ice cream.  But since becoming acquainted with Twitter, I've accessed the Sweet & Sara website more often for things like coupon codes, seasonal products, and even video of their "Unwrapped" segment.  So, when I was about to place my relatively significant holiday order this Easter/Passover, I turned to the website.

It is ridiculously easy to navigate and woot to the shop online option, wherein the mind-boggling efficiency really begins.  Despite "special instructions" (I am admittedly a pain in the butt), my order shipped within a few hours of being placed.  Not only did I receive an immediate receipt upon placing the order, but I was then notified that it had shipped, and received the tracking information in the blink of an eye.  The only thing that would have been more impressive would have been if the mallow goodness had beamed instantly to my table. 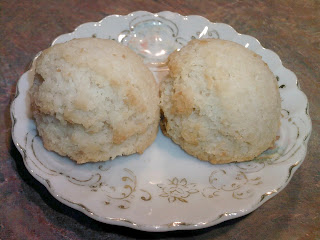 Perhaps because I can eat my weight in toasted coconut marshmallows, or maybe just because I don't hesitate to stop traffic for squirrels, I had the fortunate opportunity of being able to try Sweet & Sara's macaroons, which are currently under development.  My guess is that this is code for "they are so good that the staff is eating them faster than they can be produced".  The texture of these luscious domes was spot on and they were moist and delicious: better than any non-vegan macaroon I can recall.  Is there anything Sara can't do (please make yodels)?  But seriously, it's macaroon season; I say, "Sara, they're ready; dip them in your scrumptious chocolate and sell them to me by the dozen!"

On top of everything else, I do want to mention that not only is Sara ridiculously generous, but she's super nice!  Certainly not one of those stuck-up entrepreneurs, she actually answers her email (but please don't use this as an excuse to send her nonsense because I want to keep in the good graces of the rocky road bark queen).  In conclusion, I heart Sweet and Sara.  Not only do they make it much more yummy to be vegan, but their mere existence educates the masses as to why mainstream marshmallows are gross.
Posted by Abby Bean at 11:03 AM