Food for Life recently sent me some of their new, gluten-free, exotic black rice tortillas to sample.  While I'm not gluten-free, I can appreciate that wraps are a terrific meal option that everyone should have the opportunity to enjoy. 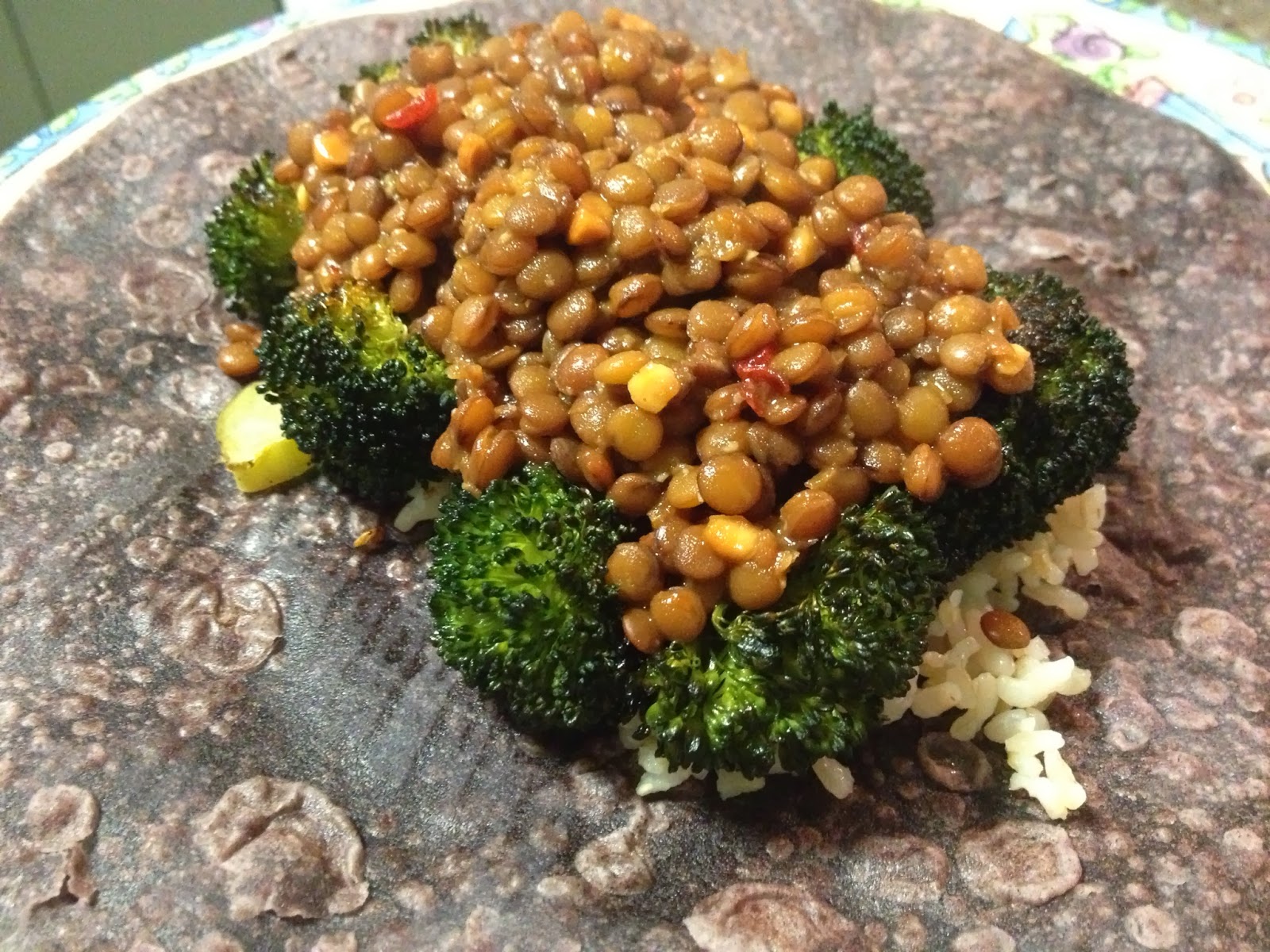 From Food for Life:


"Tortillas are one of the most versatile tools in our gluten-free or vegetarian tool box, and new to the “wrap” party is Food for Life’s 100% gluten-free and vegan Black Rice Tortillas.
Totally free of conditioners, additives, artificial flavors, colors and preservatives, Food for Life’s Black Rice Tortillas are loaded with vitamins, minerals, natural fiber and antioxidants, and contain 4g of protein, 2g of fiber and 0g sugar. So, feel like Mexican cuisine, a deli sandwich wrap, or a pig in a blanket minus the bun? No problem, there’s a new way to wrap it up J. Visit www.foodforlife.com for more info or find the brand on Facebook." 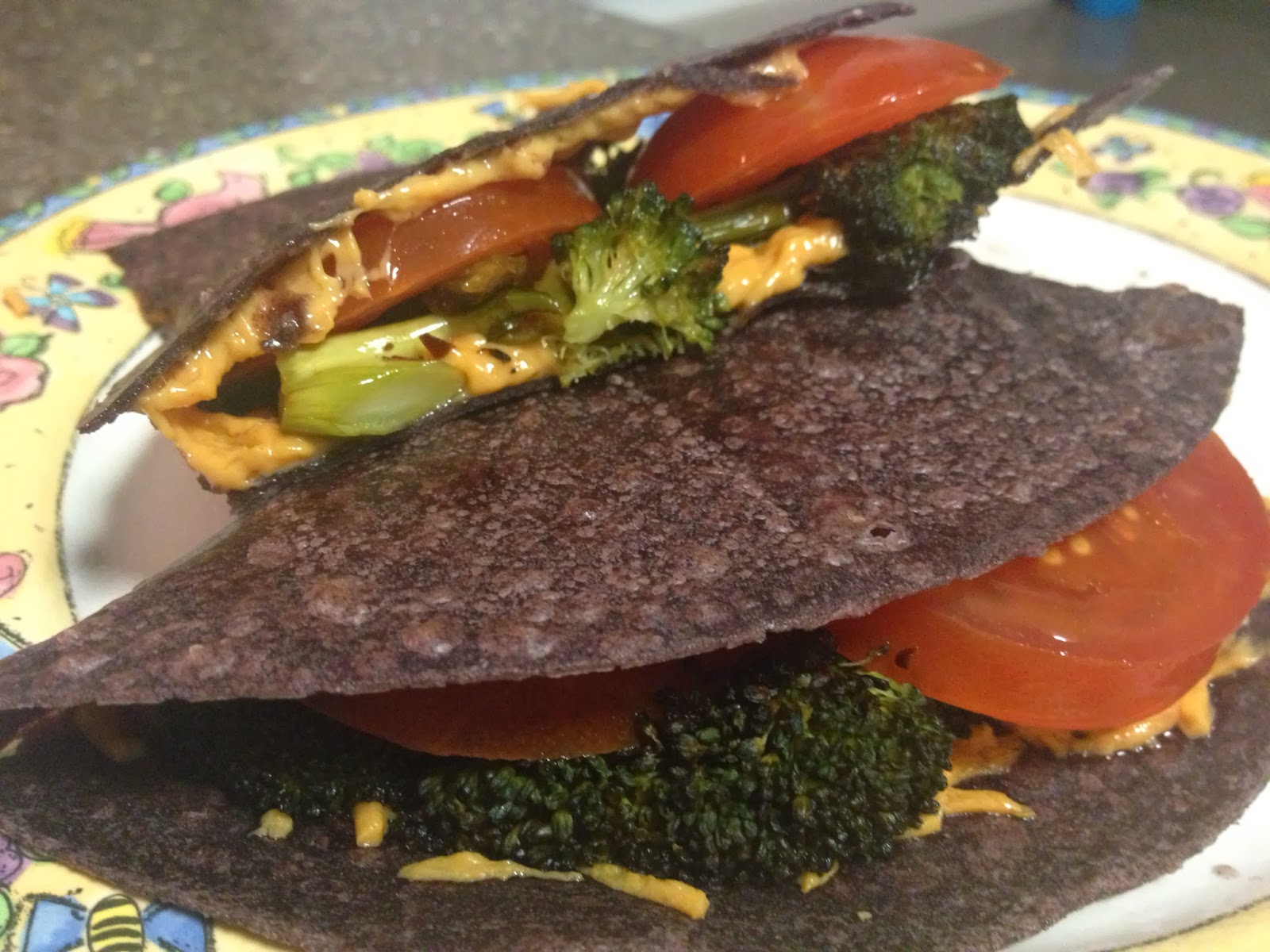 I was really excited to be in receipt of the sizable, appealing tortillas and my mind went immediately to Mexican food. 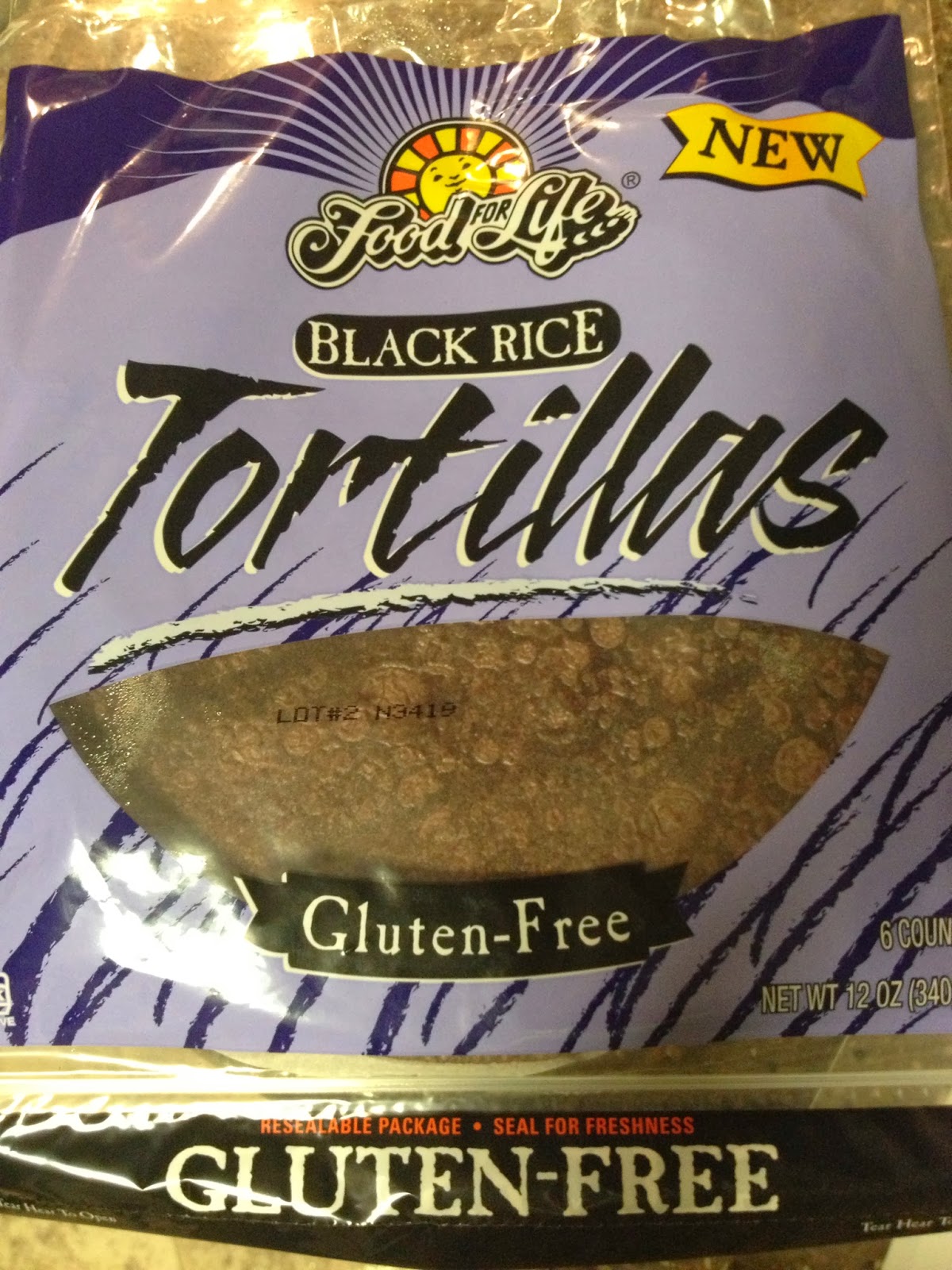 But then this enticing Vegan Richa recipe appeared in my feed for sweet and sour lentils and the inaugural tortilla filling was confirmed.

I'd received the following information about preparing the tortillas:


"Please note that the tortillas are frozen when shipped, however they will likely thaw in transport; this is okay. We recommend freezing them upon delivery. (Shelf life is 5 days at room temp; 3 weeks when refrigerated; and 1 year frozen.)
Food for Life recommends first thawing the tortillas completely to room temp, then placing a moist paper towel over them and heating them for approximately 30 seconds on high in the microwave. This can help restore pliability and produce better results."


I did, indeed, freeze them until I was ready to use them.  Then, per the directions, I thawed them in the refrigerator overnight, allowed them to warm to room temp, then heated them as suggested immediately prior to dinner.  When I removed the tortilla from the microwave and was ready to fill, it didn't really look pliable.  It seemed to quickly become less so even though I hurried to assemble. 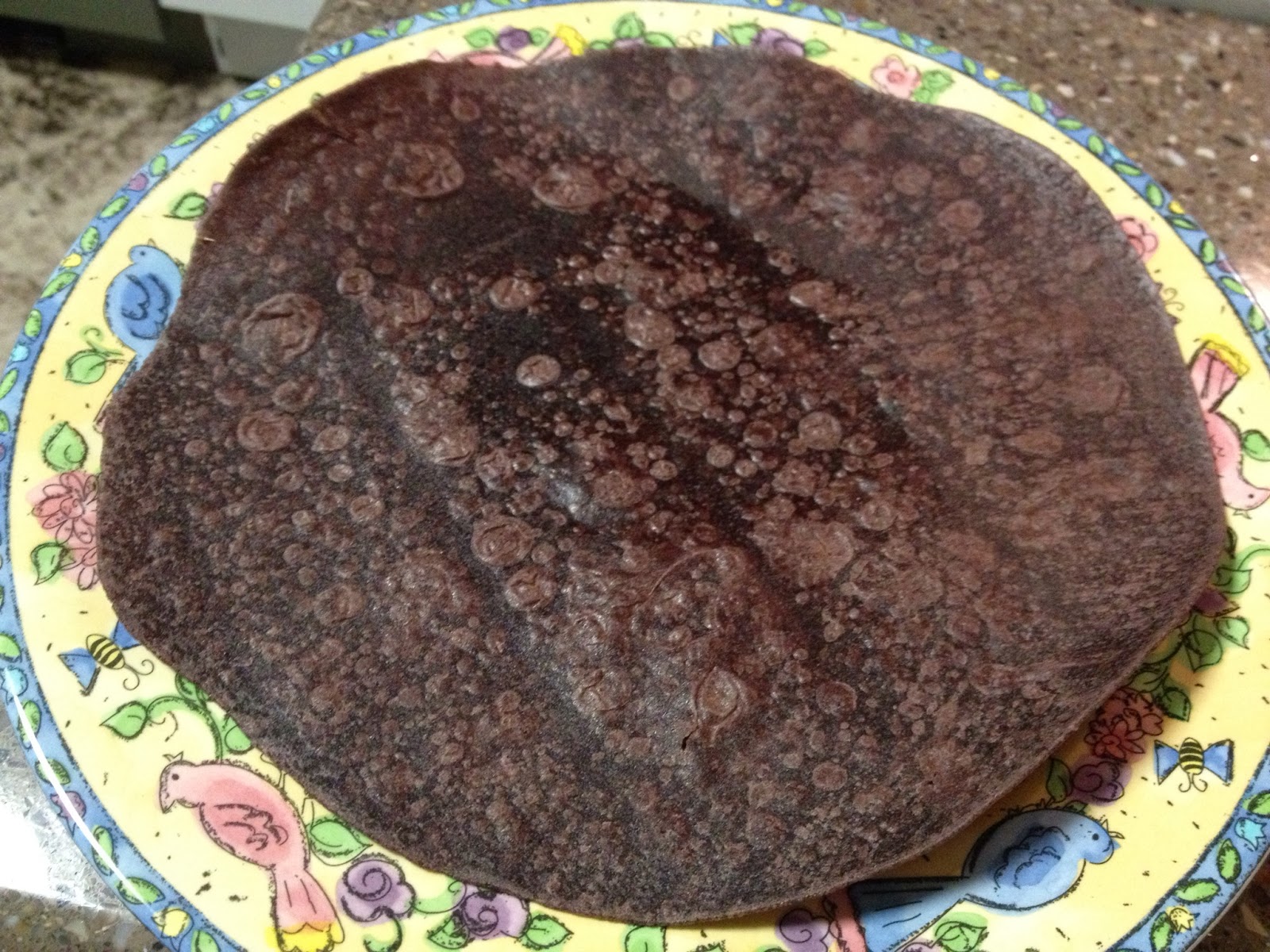 I passed on the mango and subbed roasted broccoli, rice, and carmelized onions to go with the sweet and sour lentils.

But as soon as I touched the tortilla to begin folding, the first tear occured. 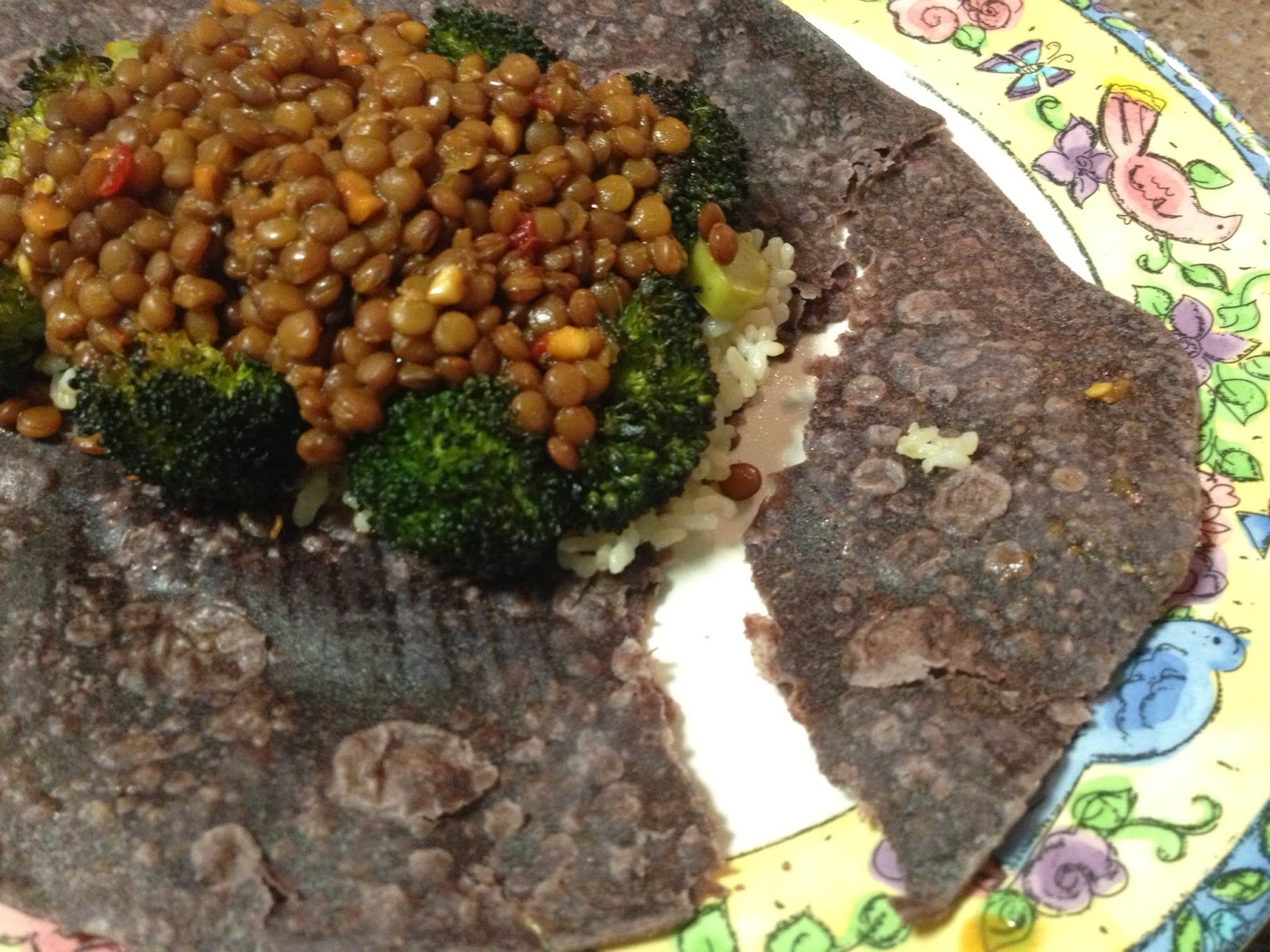 Once I actually succeeded in a loose wrap, irreversible damage was done. 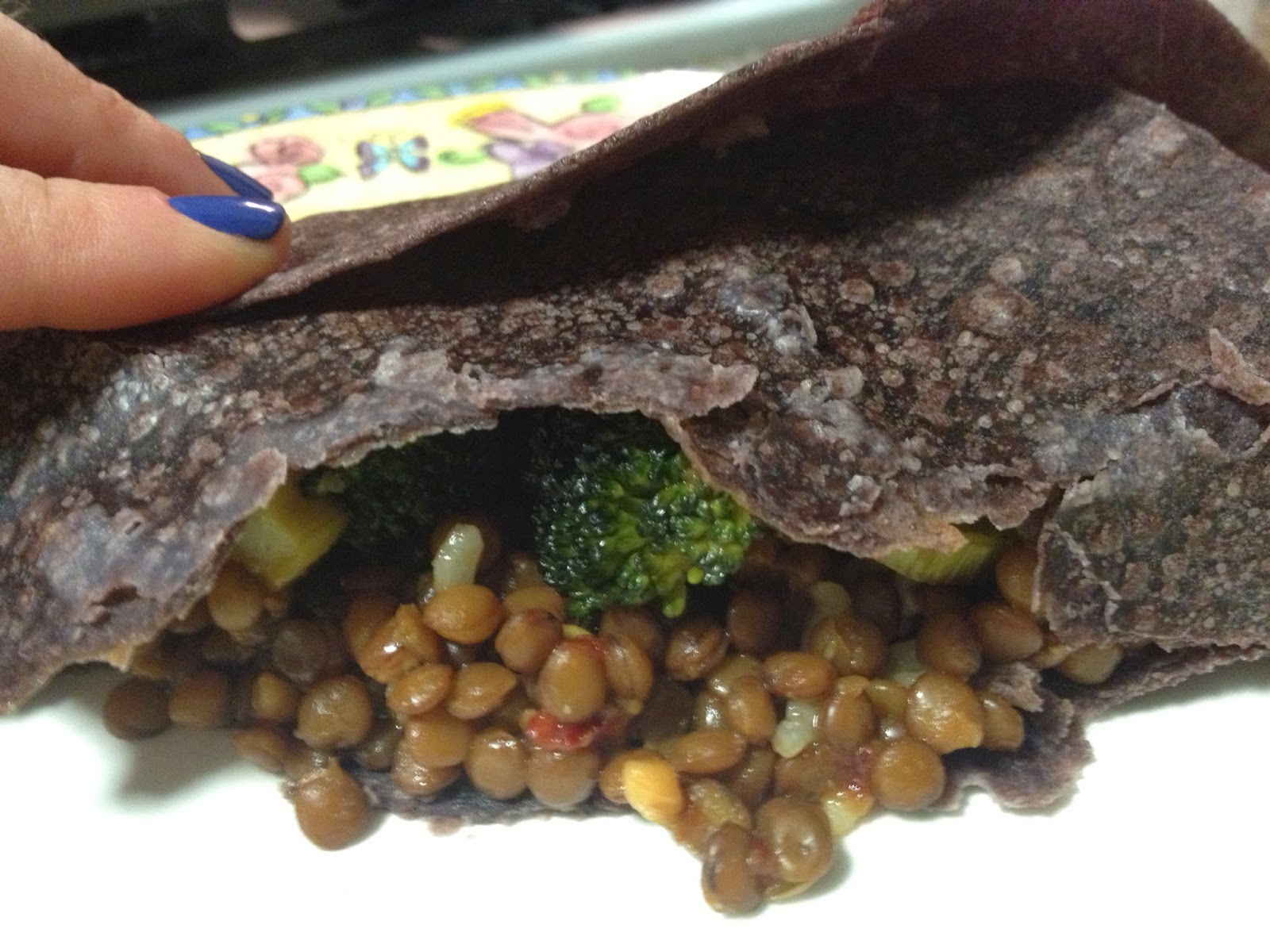 I repeated the heating process with another tortilla and transferred the contents of the first tortilla into the second- at breakneck speed.

Unfortunately, it still fell apart within seconds and I wound up eating the messy but delicious plateful with a fork, using the almost crisp tortilla pieces as one might utilize naan as an extra utensil when eating Indian food. 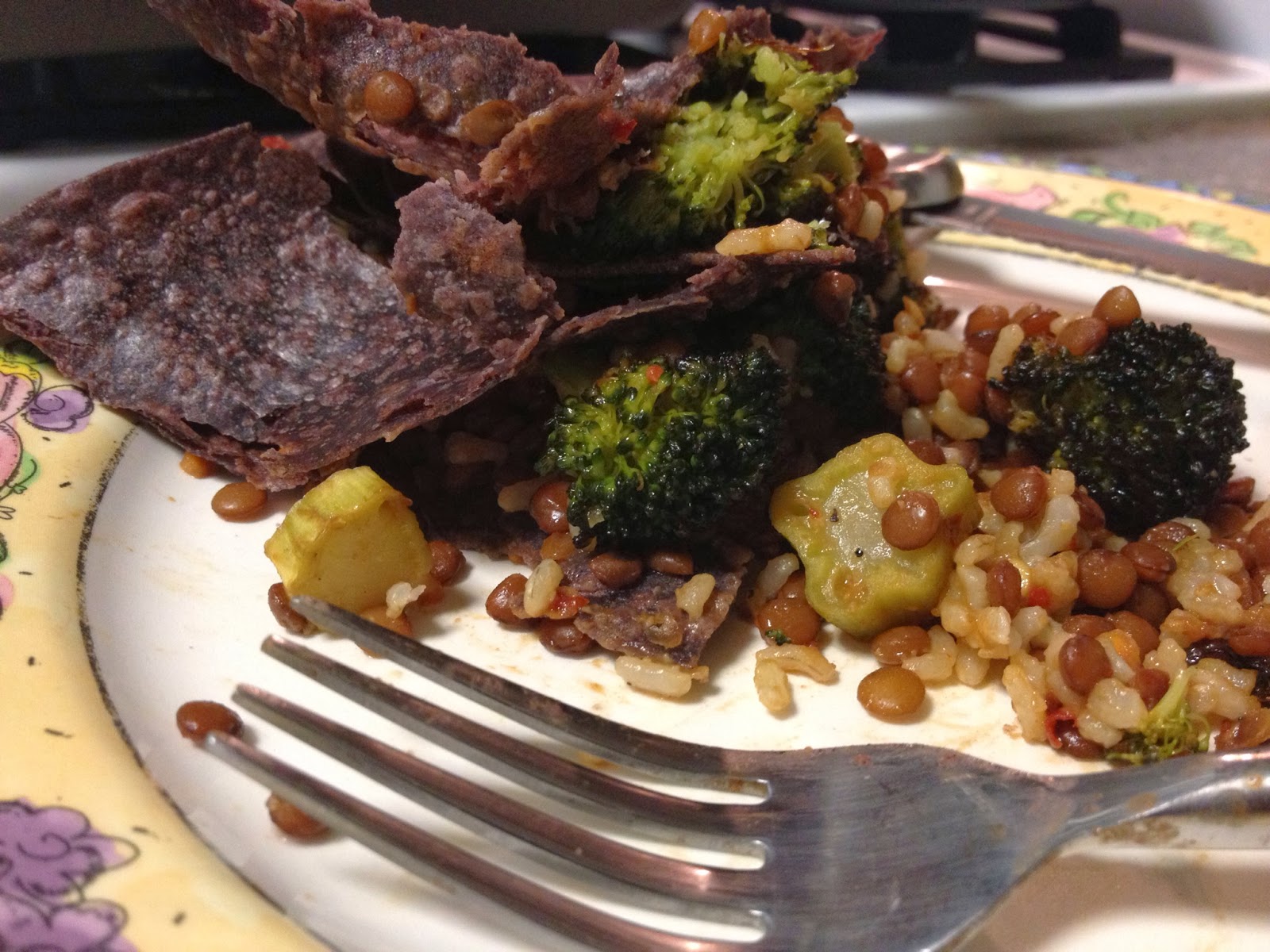 I was disappointed, but undeterred.  A friend suggested I may have over-filled.  While that could be true, it didn't seem like the quantity of food being wrapped was the issue.

So, the next night I decided to make quesadillas.  Skipping the paper towel, I poured about a shot glass worth of water directly on the thawed tortilla and let it soak in evenly- moving it around with my fingers.  Once "rehydrated," I microwaved cheddar Daiya on it until melted, about 1 1/2 minutes. 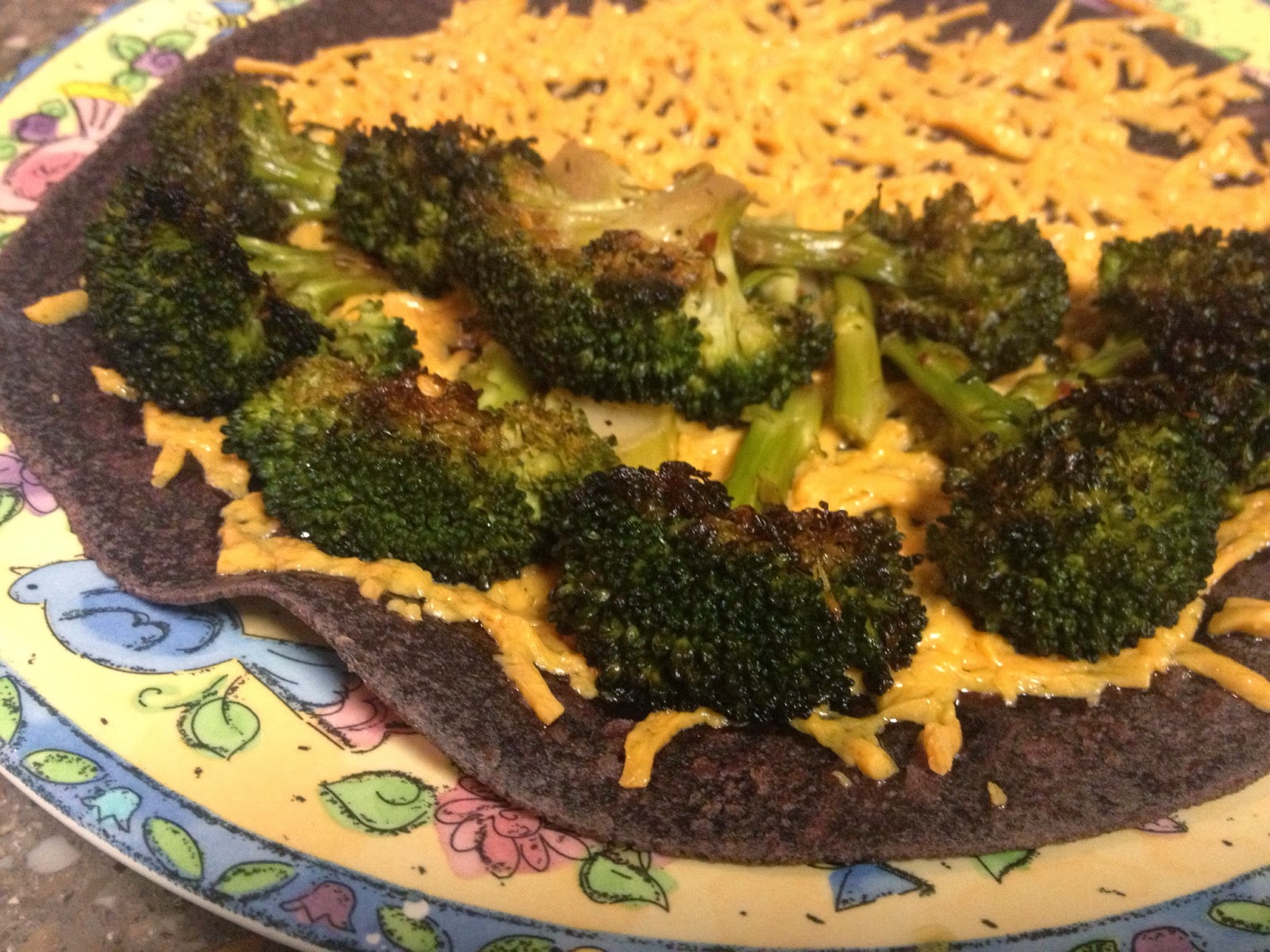 I added cool tomatoes and folded for a huge and very delicious success.  The black rice tortillas have a great taste and texture under these ideal conditions; I was very impressed! 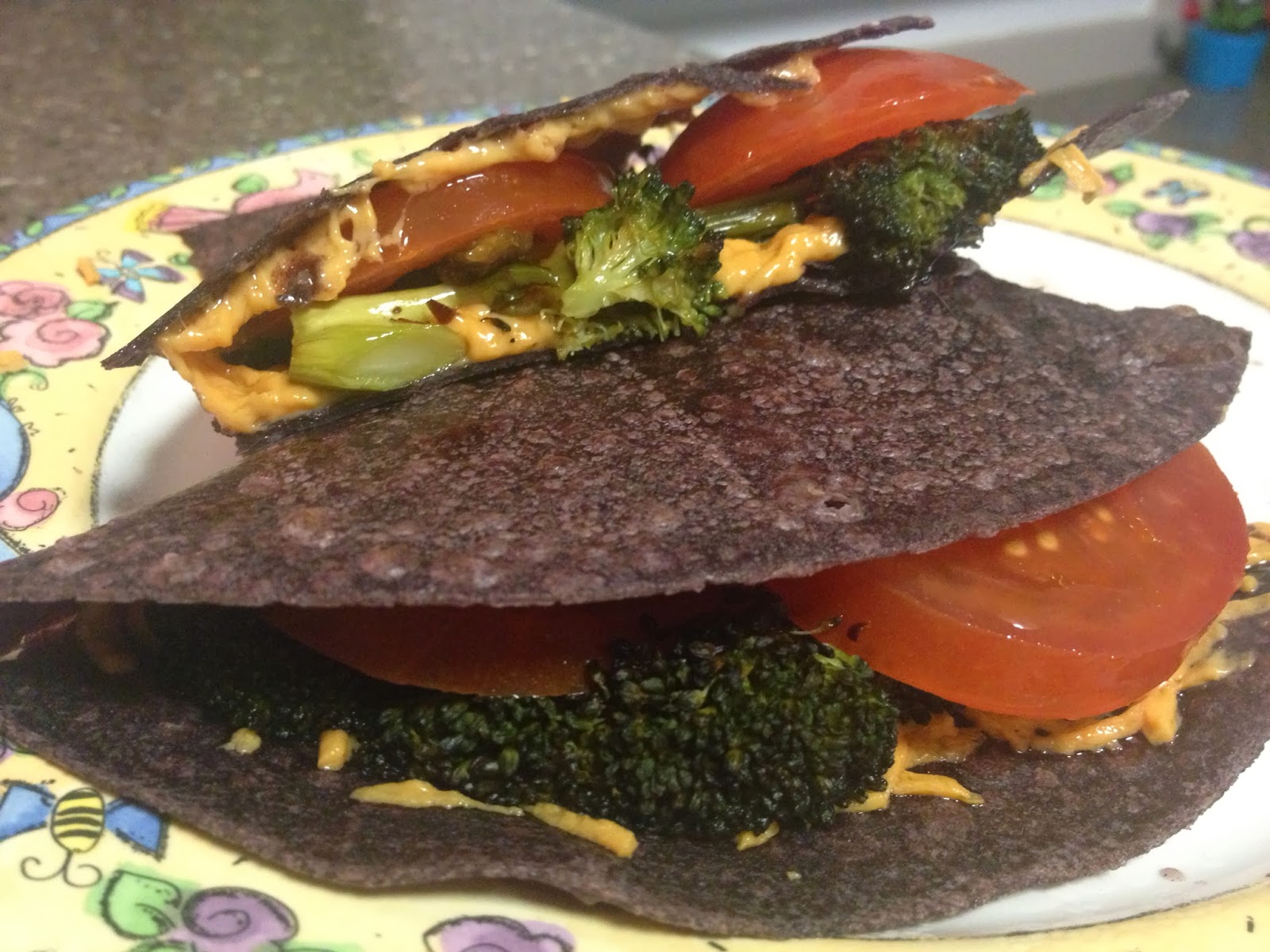 The night after that I decided to try a grilled cheese using two tortillas (I was hungry).  I repeated the tortilla-heating steps of the previous evening (I poured about a shot glass worth of water directly on the thawed tortilla and let it soak in evenly: moving it around with my fingers).  Once "rehydrated," I microwaved cheddar Daiya on the bottom tortilla only until the cheese melted.  I heated the topper tortilla "watered" in the same manner, but without cheese.  The result was mixed: the tortilla with the cheese was extremely appealing and tasty with a pliable texture, while the top tortilla quickly dried and curled: never becoming a cohesive part of the sandwich in any way. 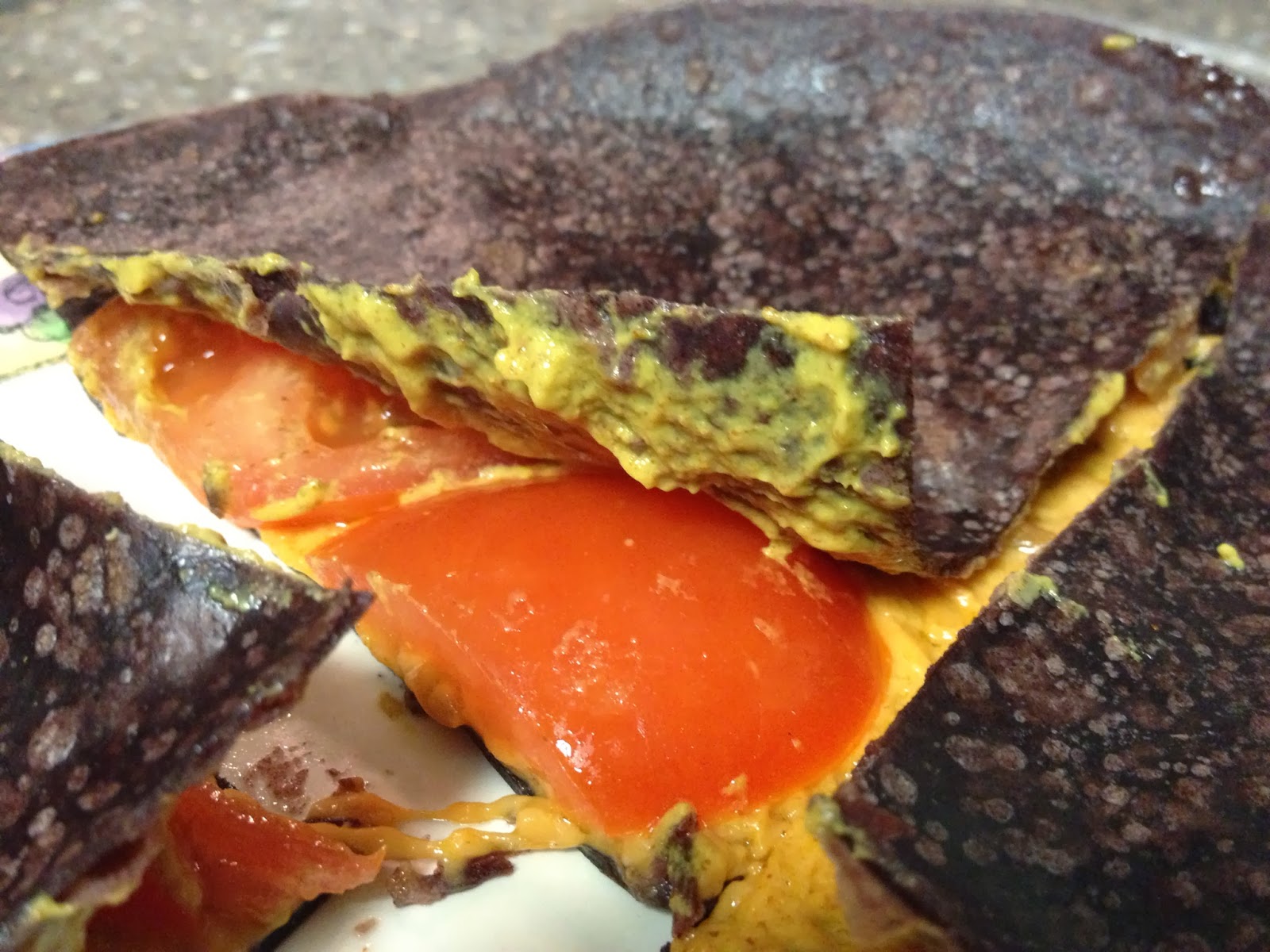 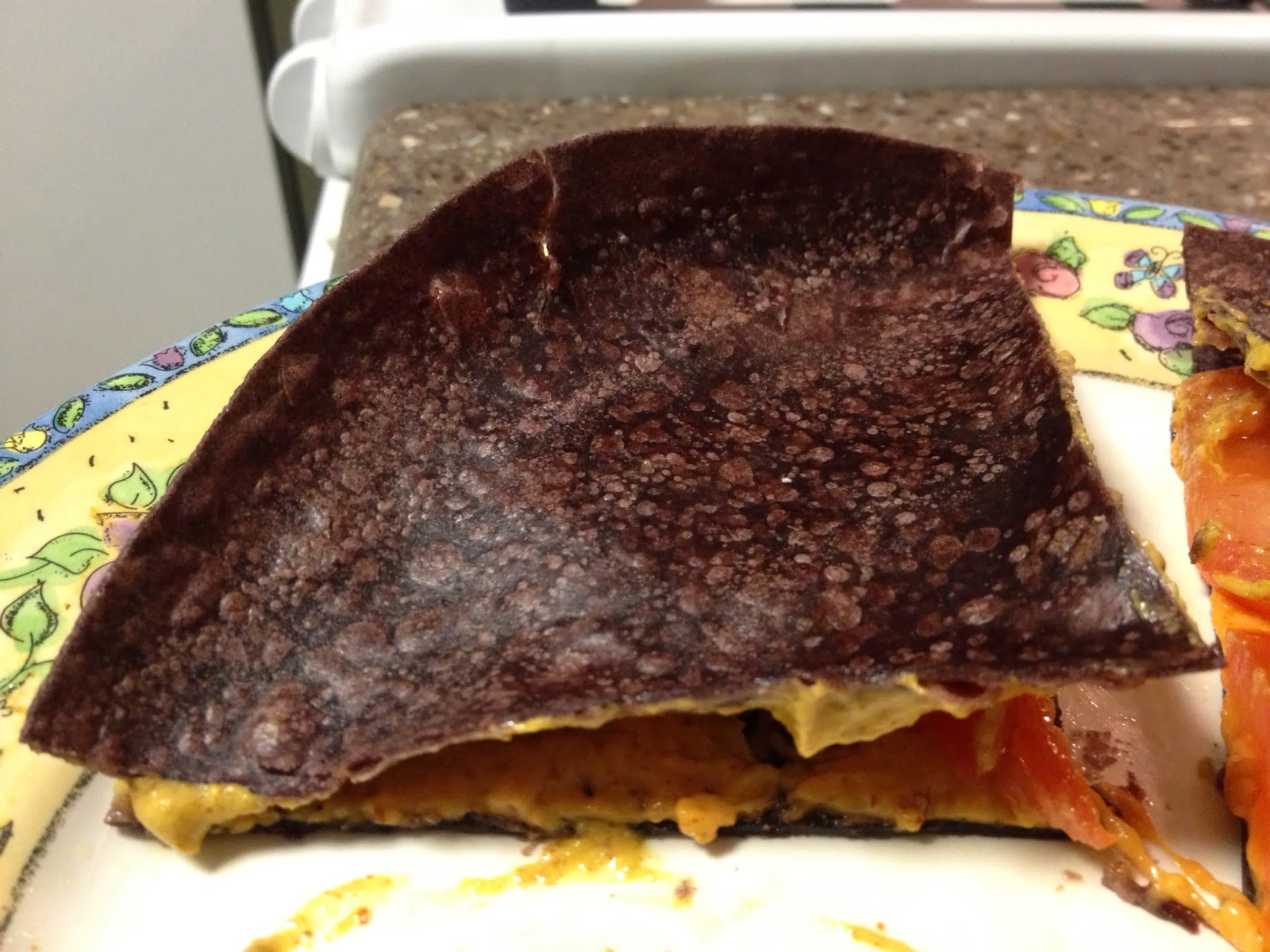 Enjoying these tortillas definitely takes some finesse, but it's worth it when you hit upon the perfect preparation.  So far it seems like the vegan cheese is the secret, but I'm open to suggestions; perhaps there are additional gluten-free handling tips?
Posted by Abby Bean at 6:21 PM