The Butcher's Daughter: Now We Know

A group of us have been wanting to try The Butcher's Daughter for a while now; this weekend our schedules aligned to make it happen. 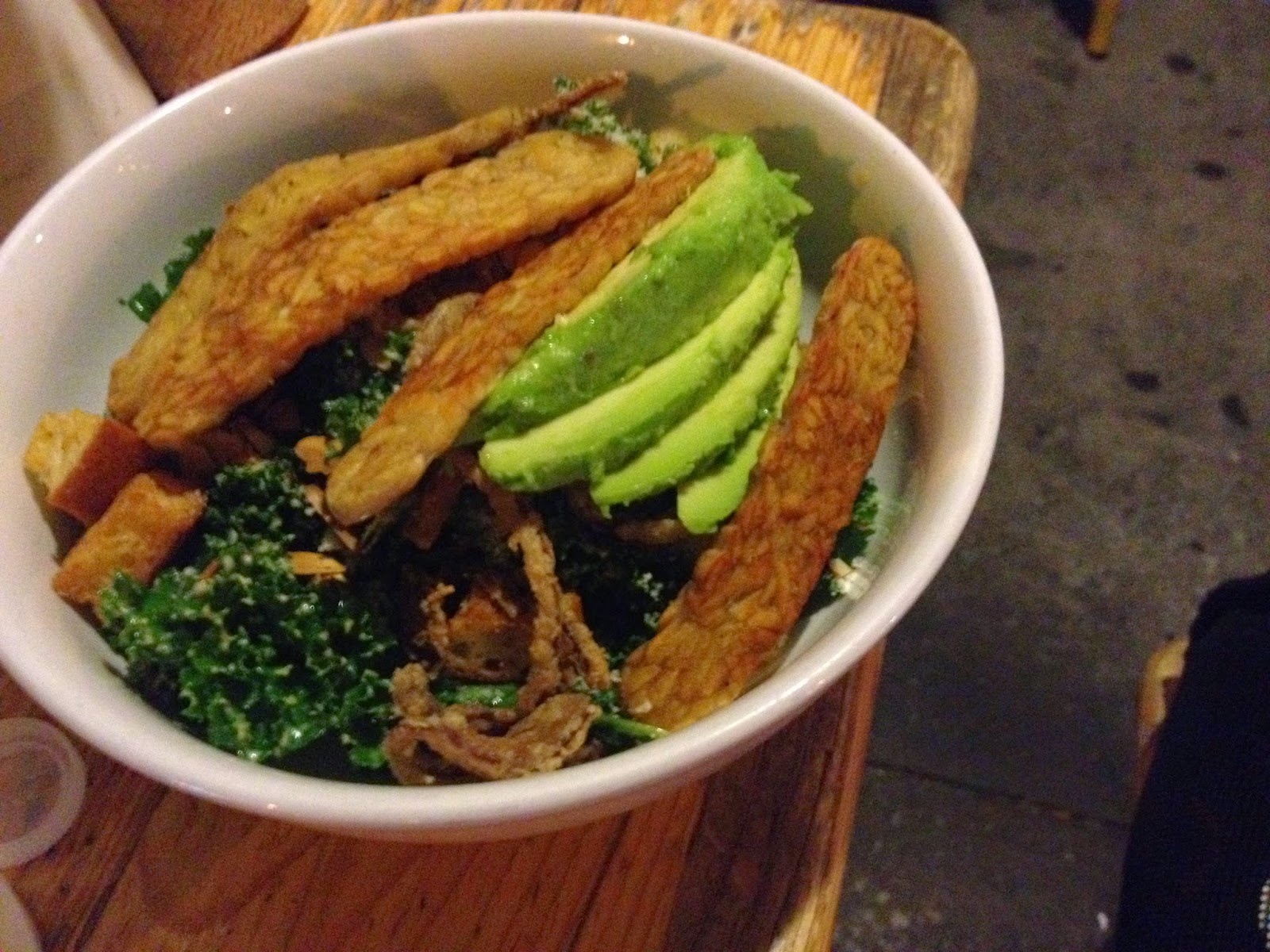 There's a significant amount of seating outside, so we had no problem getting a table with 89 in tow.  Unfortunately, our table was picnic style, which proved so uncomfortable over the course of the meal that I'm sure it was a decision based on increased customer turnover rather than aesthetic. 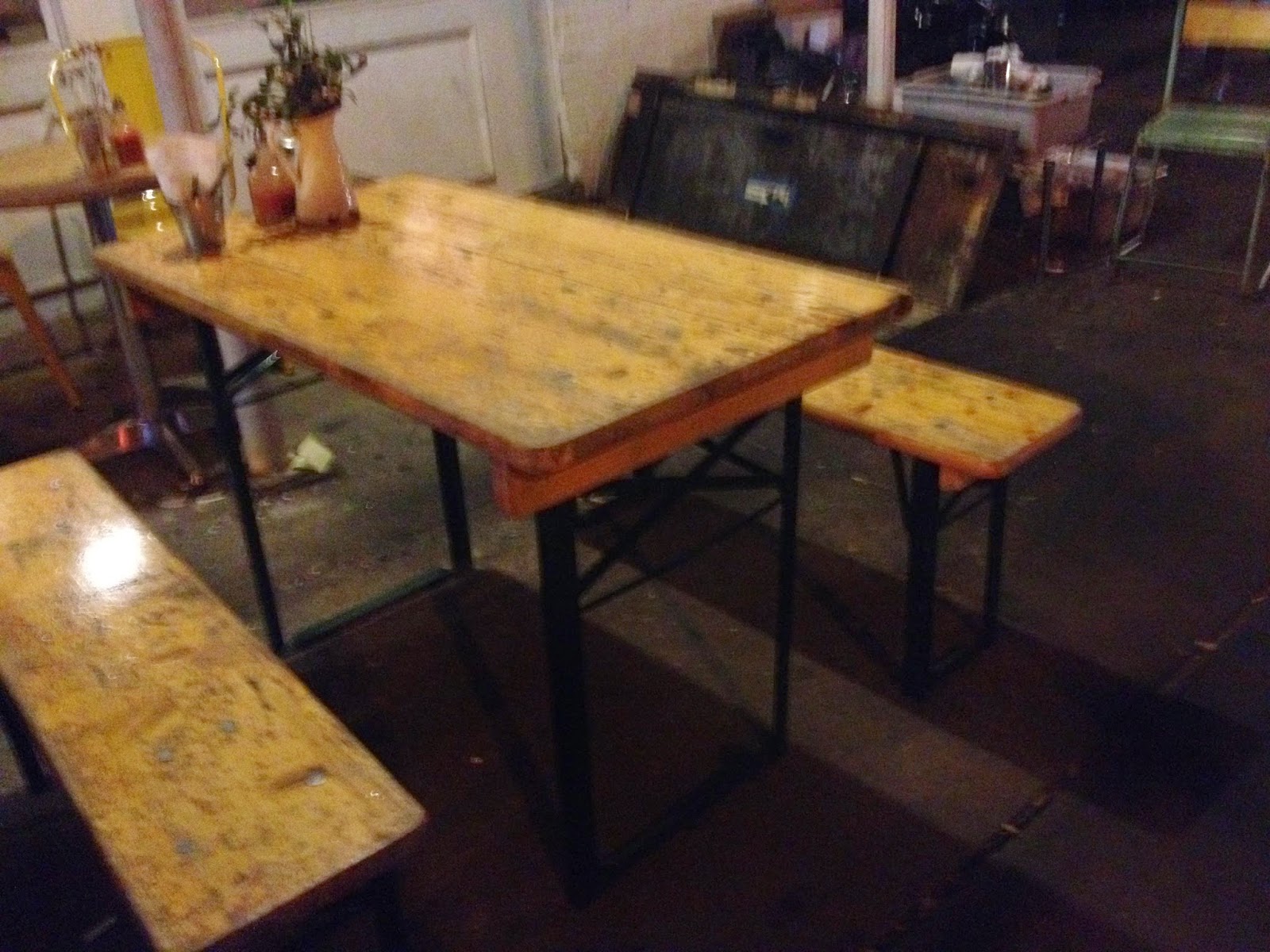 The menu states that it's all vegetarian, but there is no clear indication of what is vegan or veganizable.  We asked the waiter for some guidance and he explained that he was new and filling in for someone, so he just didn't know.  Really.  That was it; he made no move to find out.  So, after a short, uncomfortable silence, my friend said, "Well, we're all vegan, so we can't order until we know what's vegan," and he disappeared for about ten years.  I mean, minutes. 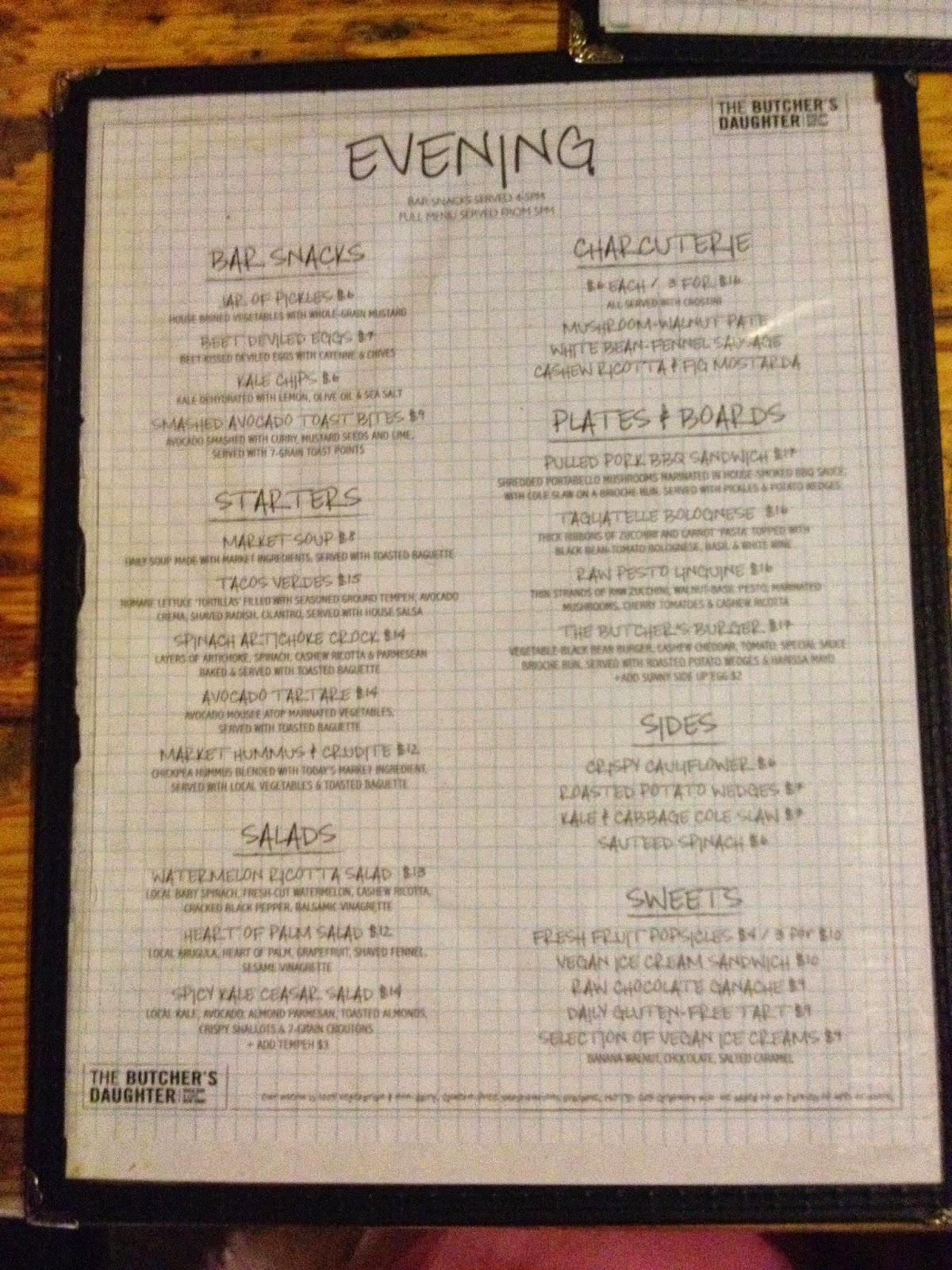 When he returned, he told us that everything on the menu was vegan (presumably including the deviled eggs) except for three things: one of which he claimed was the kale salad.  He left again when this declaration was met with four sets of perplexed and incredulous eyes staring back at him.  We were able to flag down another waiter who explained that everything on the menu really was vegan save three things, but that the kale salad clearly was; the eggs obviously weren't.  It never ceases to amaze me how much more difficult it can be to acquire vegan food from a vegetarian restaurant than an omnivorous one. When our waiter returned we finally ordered, but 89 had already had it (I was thisclose). 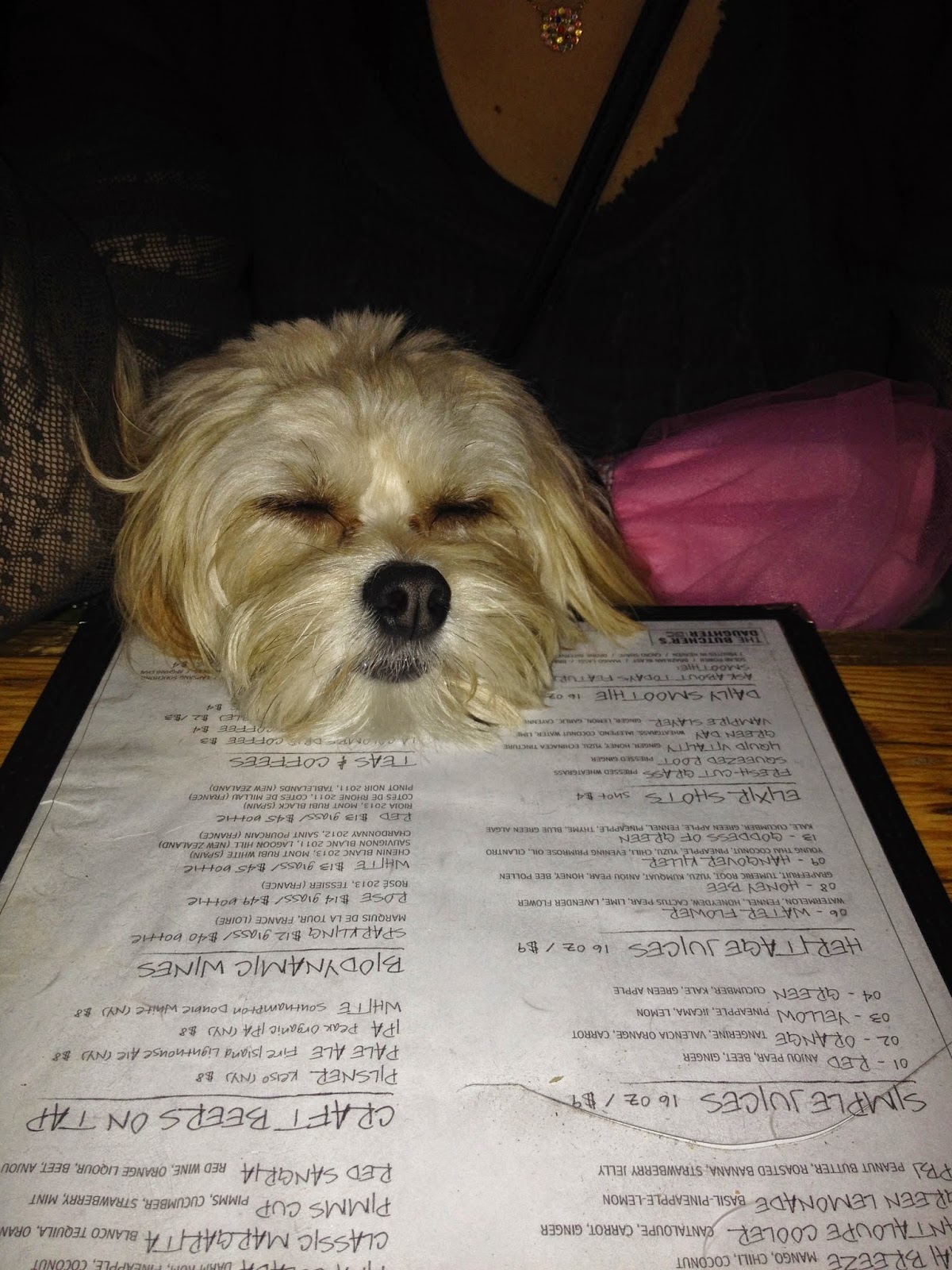 We were all excited to try the spinach artichoke crock: layers of artichoke, spinach, cashew ricotta & parmesan baked and served with toasted baguette.  But instead of the creamy, cheesy dip we were expecting, it was a sad representation of the non-vegan original.  The small ramekin contained lukewarm wilted spinach and quartered artichoke hearts right from a jar, mixed sparingly with tasteless vegan cheese specks with partially melted cheese shreds atop. 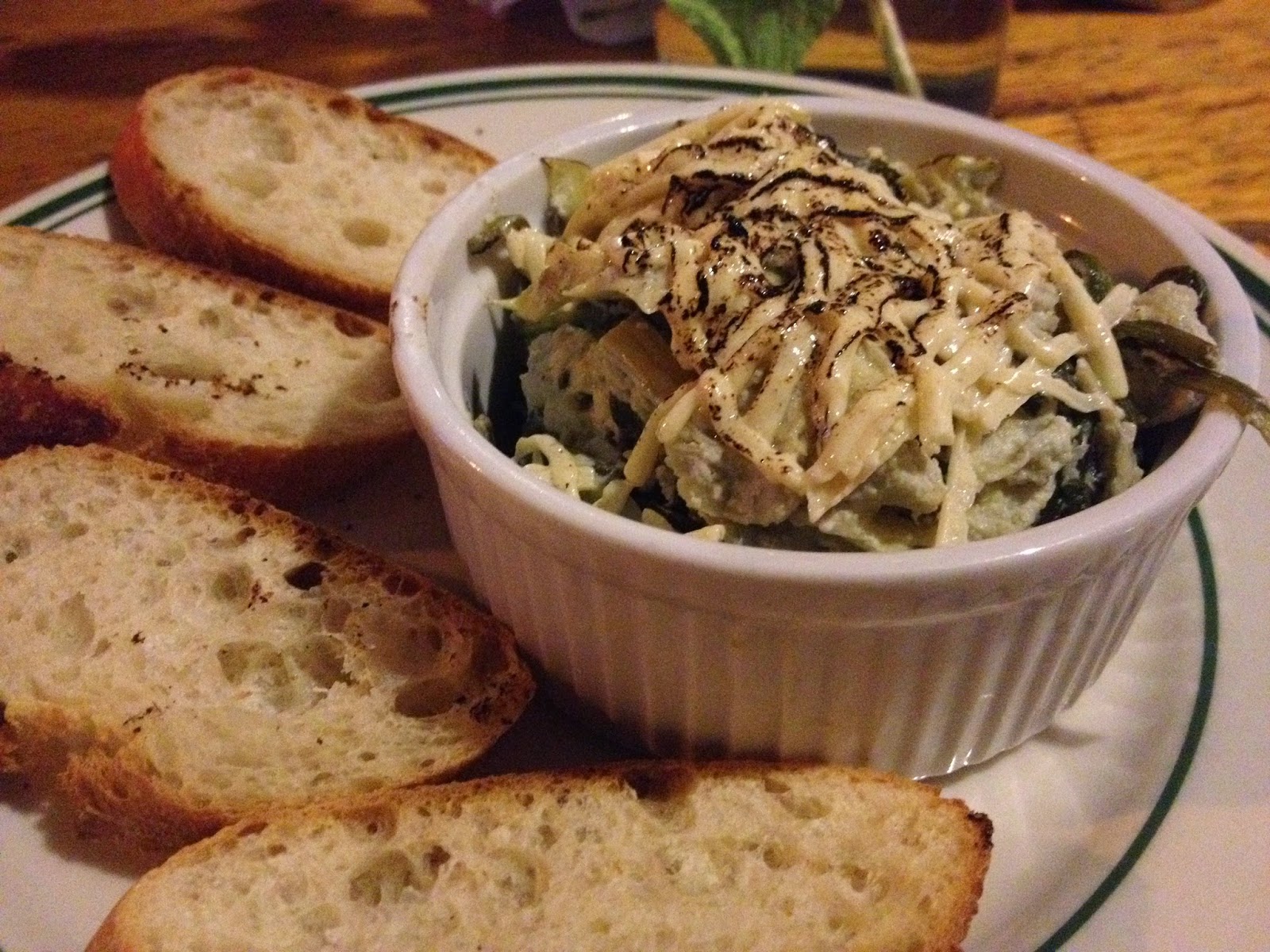 We also ordered a side of the crispy cauliflower to share. 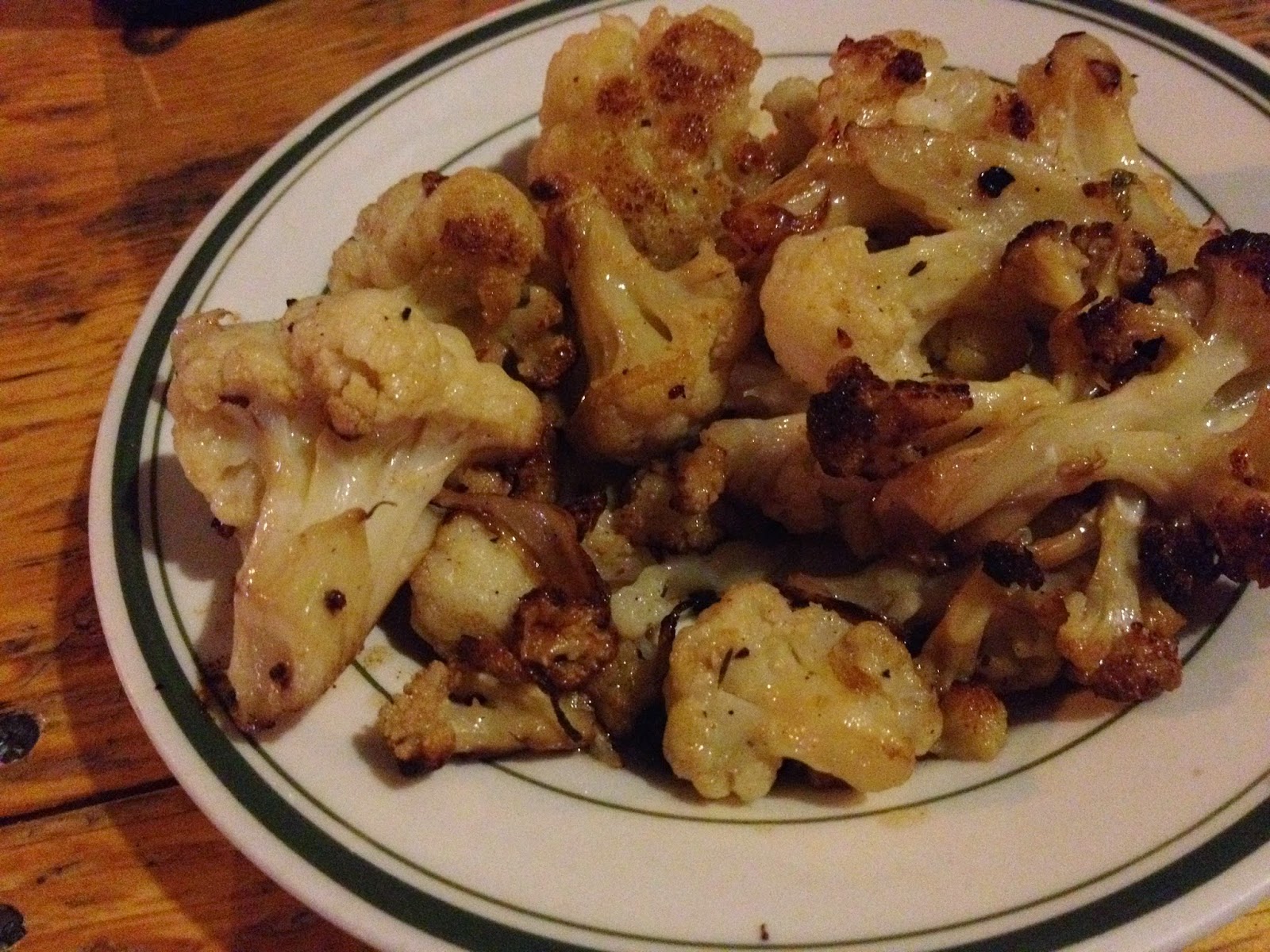 While that was significantly tastier, what it lacked in crispiness (none), it made up for in oiliness (lots). 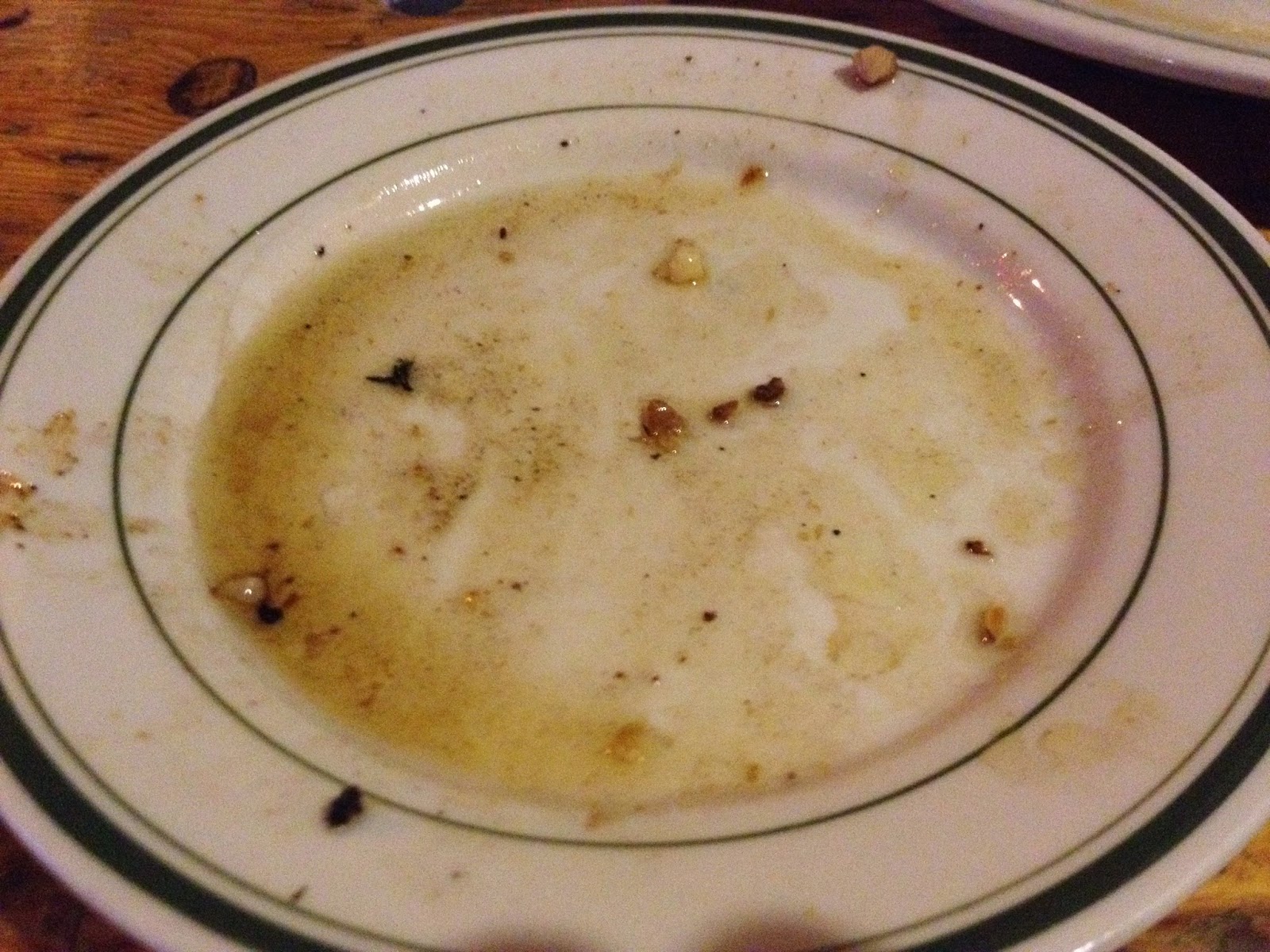 One friend ordered The Butcher's Burger: vegetable-black bean burger, cashew cheddar, bibb lettuce, tomatoes, pickles & special sauce served on brioche bun with roasted potato wedges and harissa mayo. She subbed sautéed (oily) spinach for the potatoes, but there was no lettuce…no pickles.  We also collectively thought the cheese was Daiya (UPDATE 10/30/14: if you look at this review from March 14 you'll see that what we had was DEFINITELY not cashew cheese, which would have made the price more appropriate). 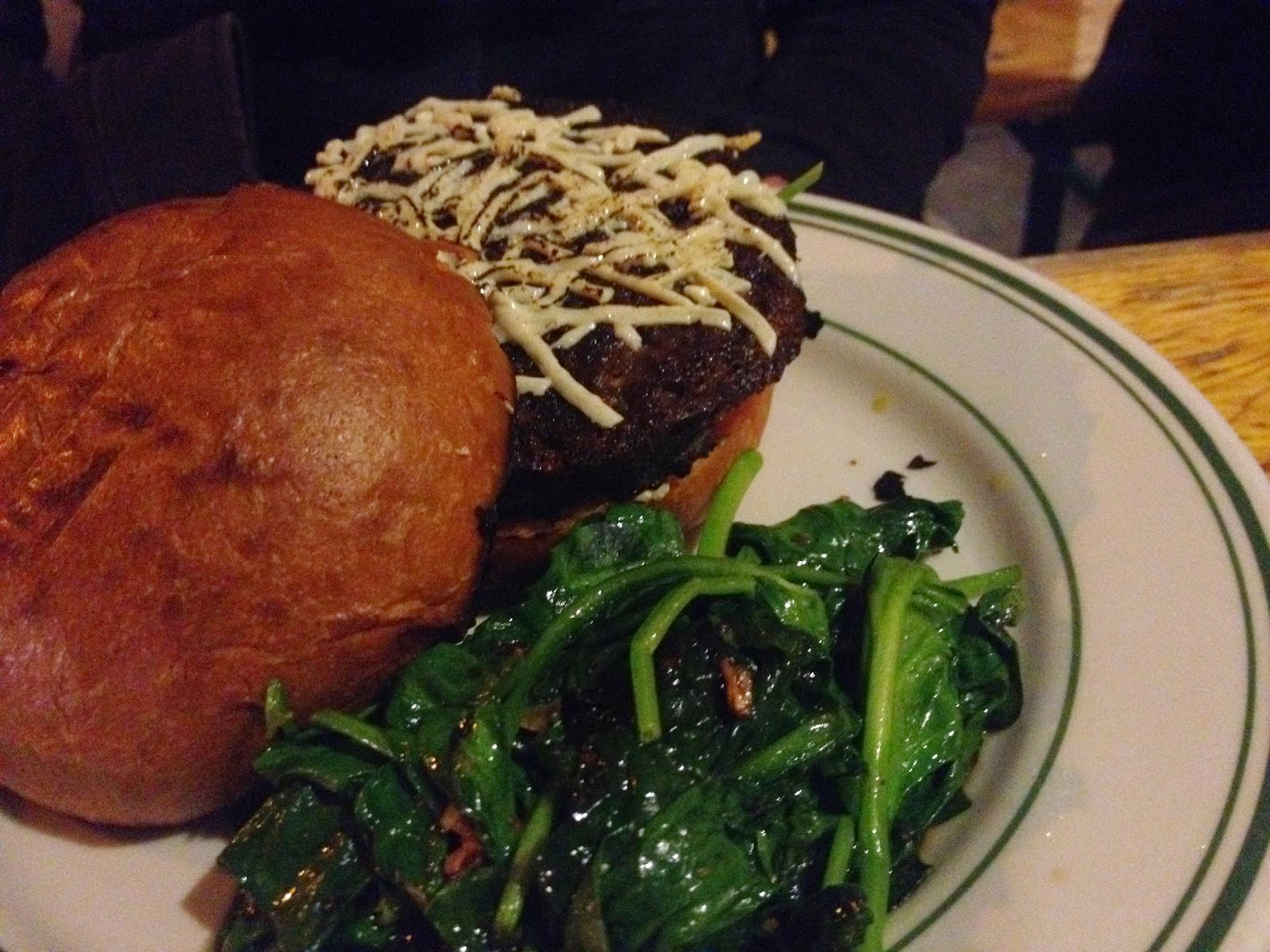 On top of all that, the burger was obviously fried in oil so that it was crisp as a hockey puck on the outside, yet oozed oil when you pressed on it.  Are you noticing a theme? 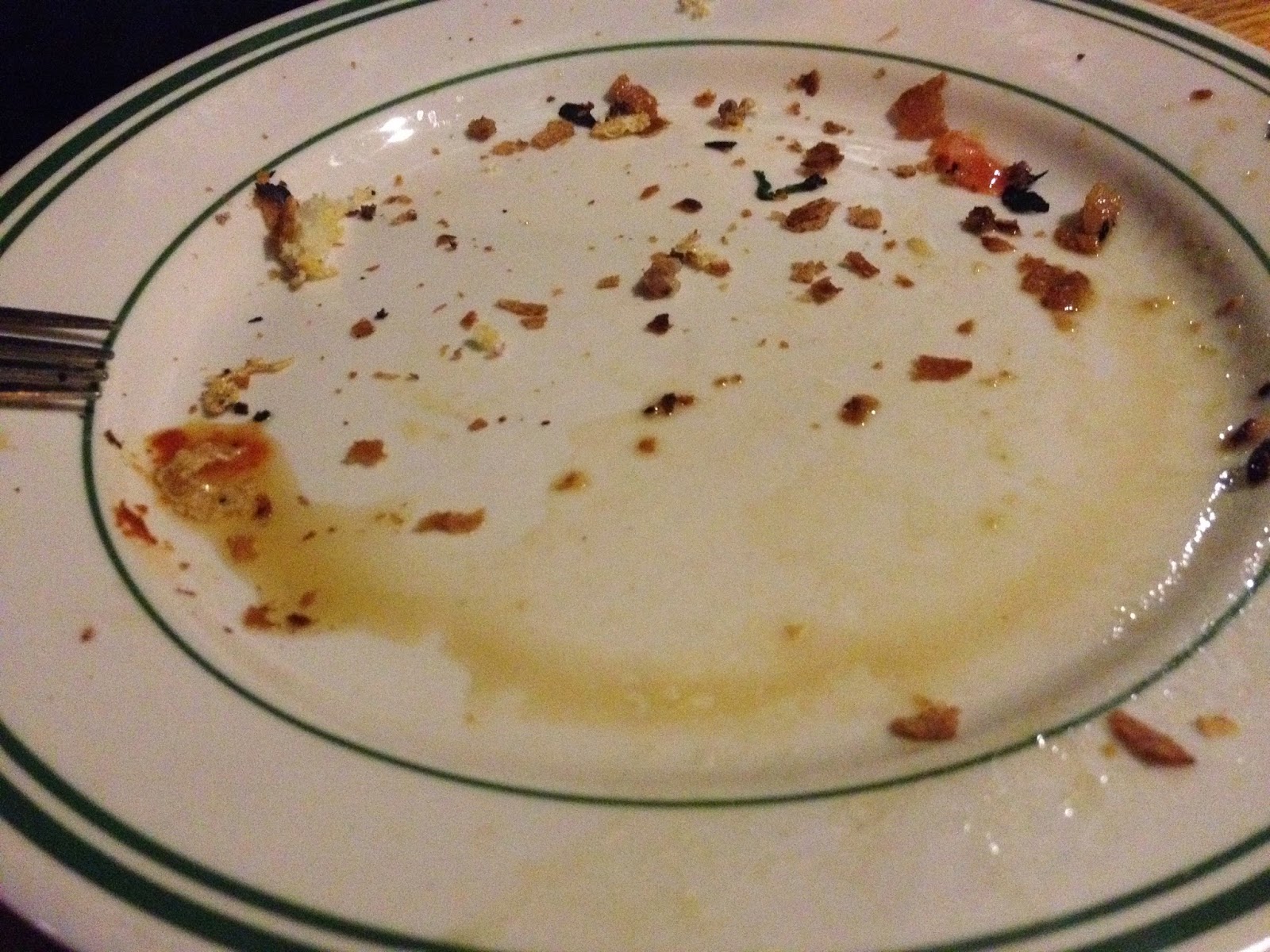 From the moment we were seated I knew I was going to order the pulled pork BBQ sandwich: shredded portabello mushrooms marinated in house-smoked BBQ sauce with coleslaw on a brioche bun, served with pickles & potato wedges.  The Butcher's Daughter, however, had other ideas; they were "out."  I wished I was as well.

Instead, I went with the most popular order of the table: spicy kale caesar salad: baby kale, avocado, almond parmesan, toasted almonds, crispy shallots & 7-grain croutons with added tempeh.  It doesn't matter to me, as I like the mature variety better anyway, but the kale was not "baby."  The salad was small overall: consisting of about two, untorn, destemmed leaves of curly kale that prompted a friend to note: "I'd better cut this kale, otherwise I'll have the whole salad in one forkful."  The half of an avocado was perfection; I'll give them that.  I also really enjoyed the dressing, which was only spicy for a half of a second (and didn't need to be at all).  I'll even concede that the toasted almonds added a nice crunch along with the croutons.  However, the "crispy" shallots were cool and oil-logged and the tempeh was flavorless: seemingly un-marinated and inexplicably flash-fried.  The meal was over and I was dissatisfied in every respect. 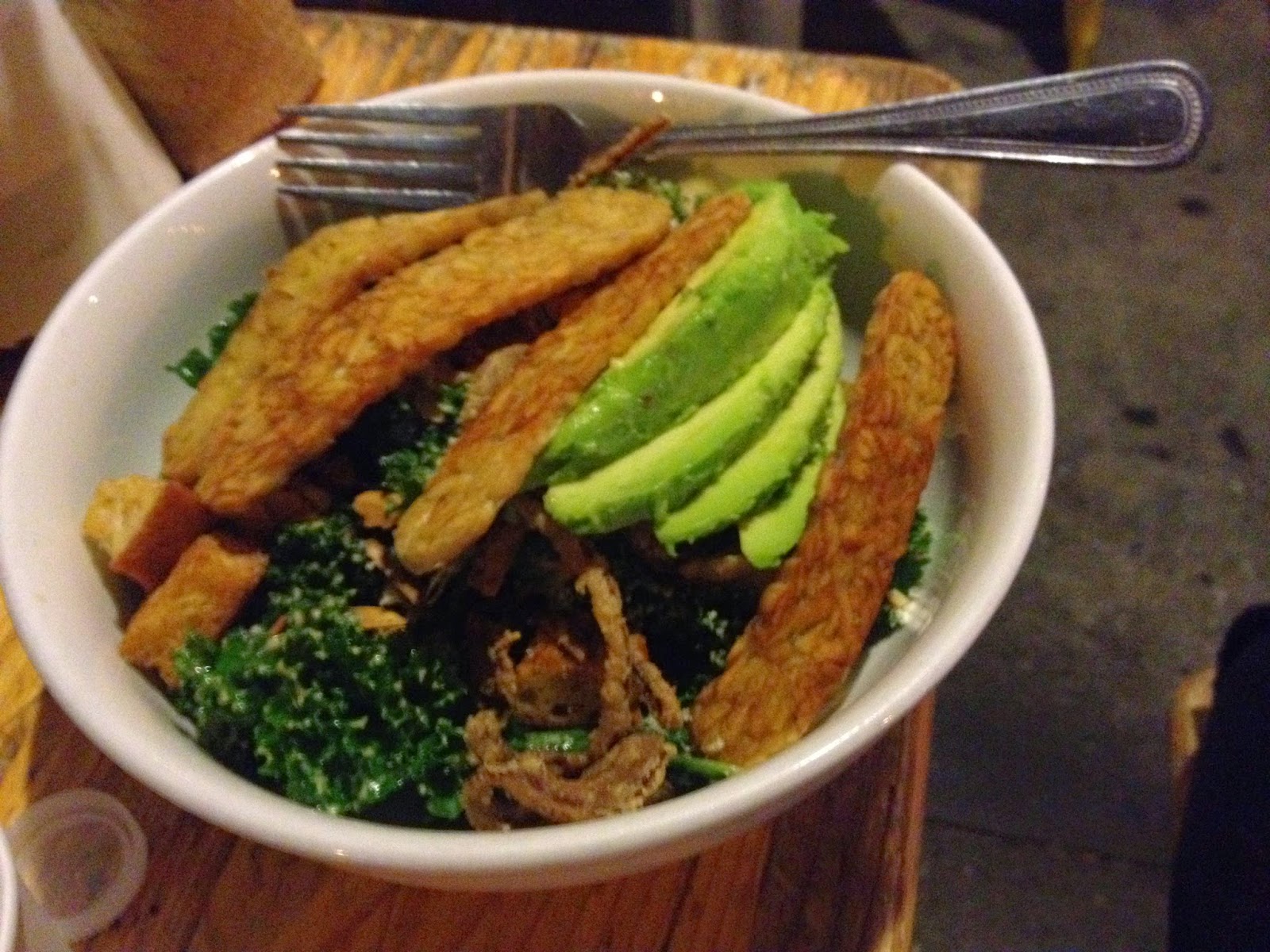 For dessert, The Butcher's Daughter offers a selection of vegan ice creams: banana-walnut, chocolate, salted caramel, and even a vegan ice cream sandwich.  Our alternate waiter was able to tell us that it was all Van Leeuwen, which I've never tried.  Alas, they were out of it.  All of it.  Nary a sandwich or scoop left.  Another theme.

Before bringing us the check, our official waiter deposited three bottles of elixir on our table; only one was labeled.  We consulted with our alternate waiter again; he informed us that it was a gift, but that he had to swap out two of the bottles because they contained honey- which our original waiter didn't understand was unsuitable for vegans.  If that doesn't give you a warm, fuzzy feeling at the end of an altogether questionably vegan meal, I don't know what does. 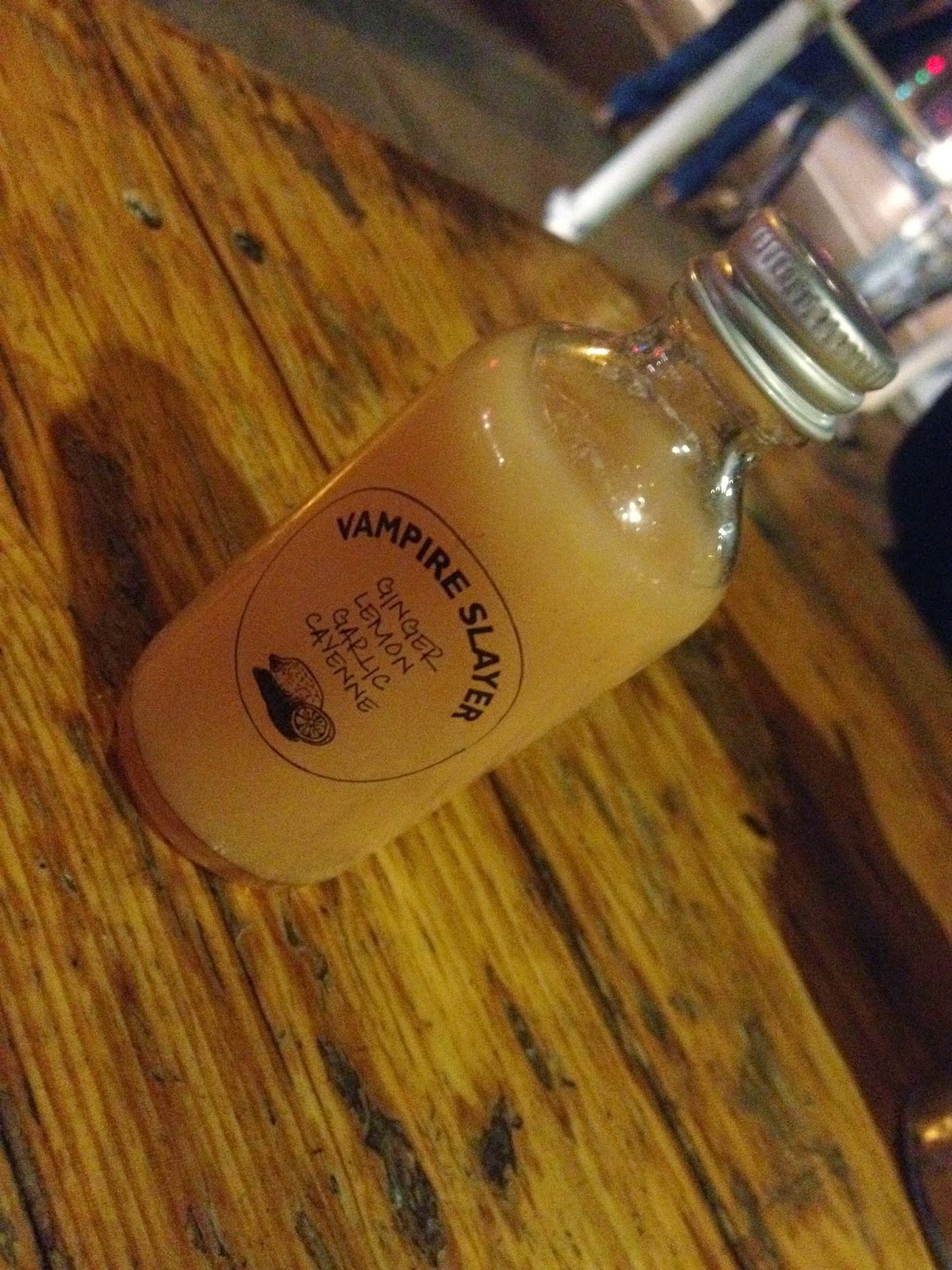 We'd really been looking forward to this meal and I was inordinately hungry in preparation.  The fact that it was so disappointing was unfortunate; we will not return.  But, as a friend wisely intonated, "now we know." 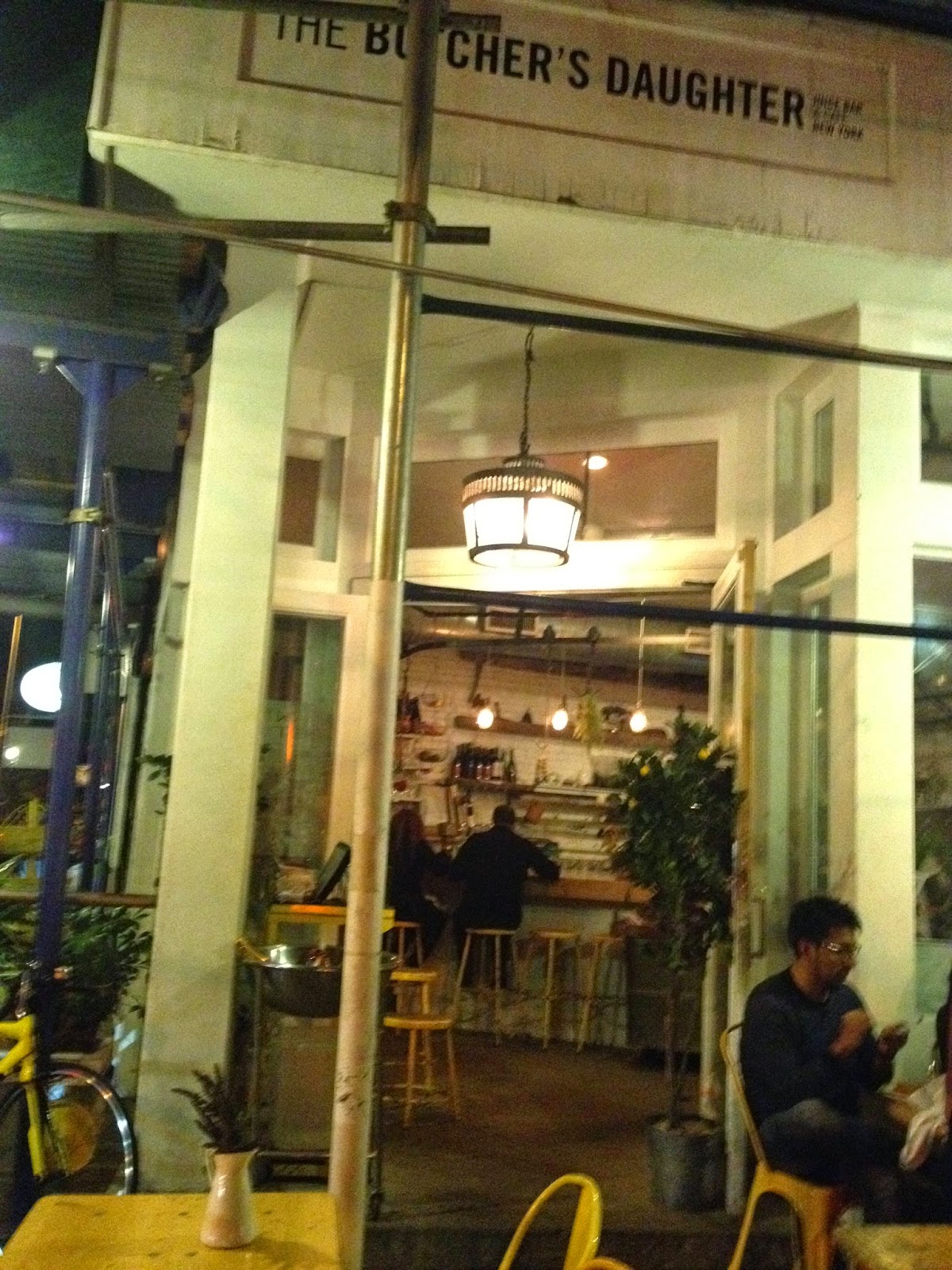 Email ThisBlogThis!Share to TwitterShare to FacebookShare to Pinterest
Labels: The Butcher's Daughter