Halloween is officially over, as is October 2014 and the possibility of a daylight commute home from work.  Here's my recap of the festivities with some commentary (natch). 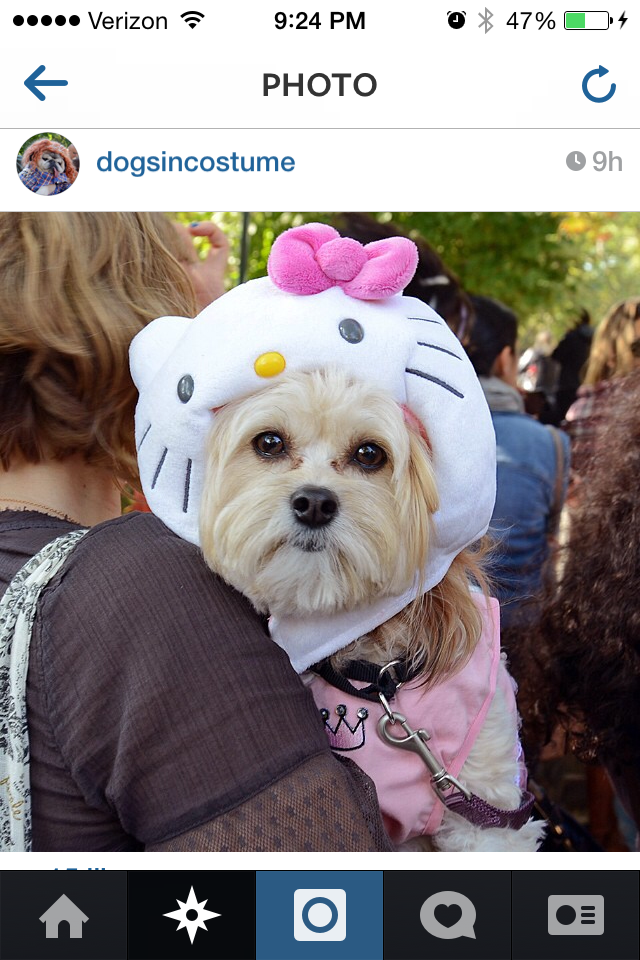 89 and I participated in the Tompkins Square Park Halloween dog parade this year; we've been thinking about it ever since we missed the last one and took the whole year to ponder her costume. There had been lots of ideas, but we were ecstatic with the final decision. 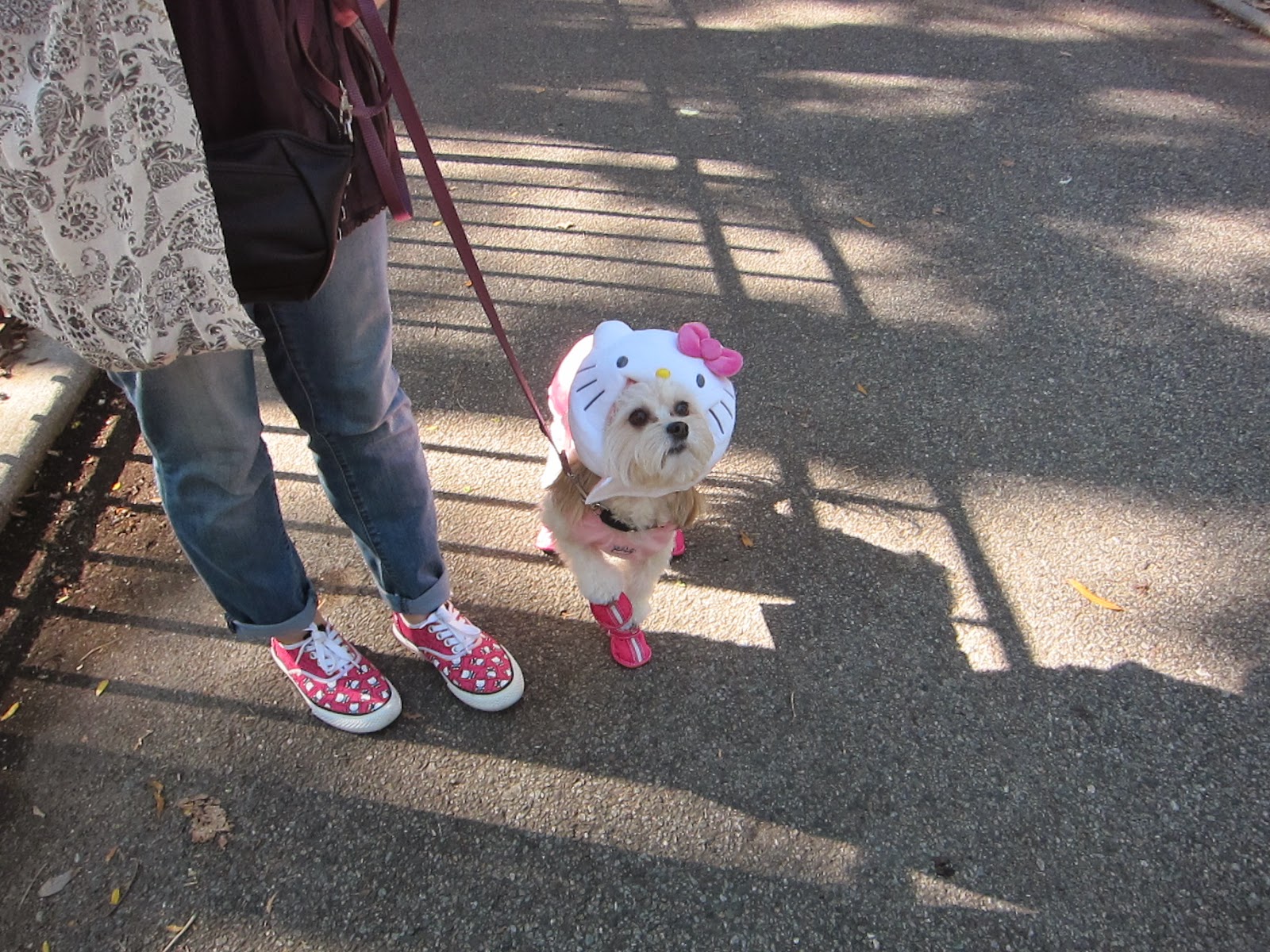 I'll be honest, the "parade" was disappointing. 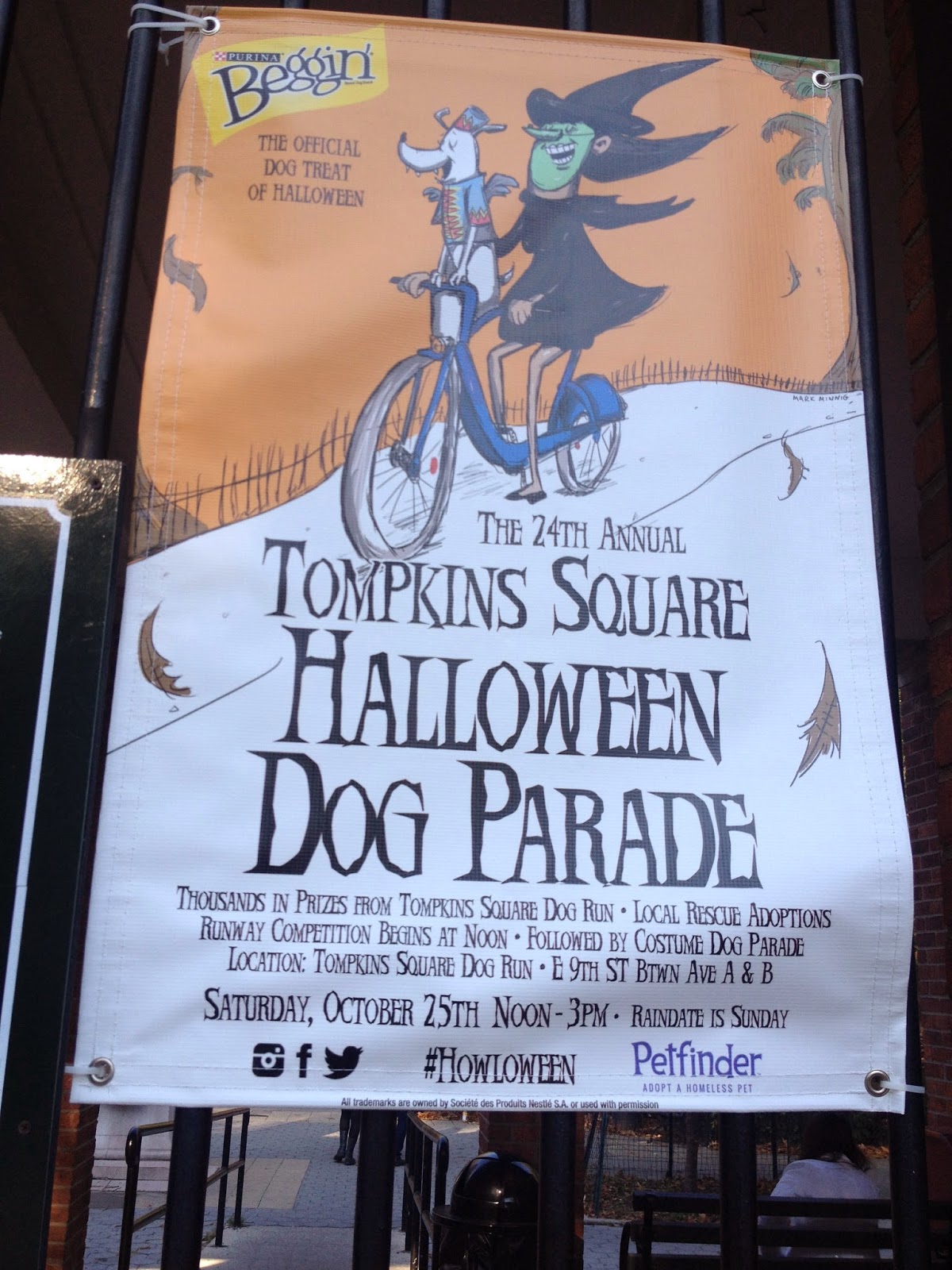 Don't get me wrong, it was super fun to have a dressed-up 89 amidst a ton of dog/owner combos that made us look sane, but the whole event was a little anticlimactic.  Let me explain.  We arrived to TSP at around 11:45 for the event that was to take place between noon and 3:00pm.  There were no signs, was no instruction available.  We got in a long line of other costumed dogs, presumably for the "parade," and were immediately inundated with photographers- professional as well as the Instagram crowd, snapping shots in incredible succession.  It was fun and exciting to feel famous for a bit, but the iPhone brigade, in particular, would hold their phone in 89's face for a good 5 minutes waiting to capture the perfect expression.  Of course, her expression in this situation was mostly impatient with a bit of ticked-off thrown in; turns out she isn't impressed by the paps.  I'd worn Hello Kitty sneakers in anticipation of all the photographs of my feet, but wound up holding her most of the time in line (3 hours) so that she wouldn't eat someone's camera in protest.


After about a half hour, a photographer in a leprechaun's hat (whose adorable "my name is" business card was lost during the days' festivities) told us and the Cookie Monster-clad family in front of us that we were in the spectator line and directed us to the parade line on the other side of the park.  It was at this time we wound up in line behind Sid Vicious and his family. 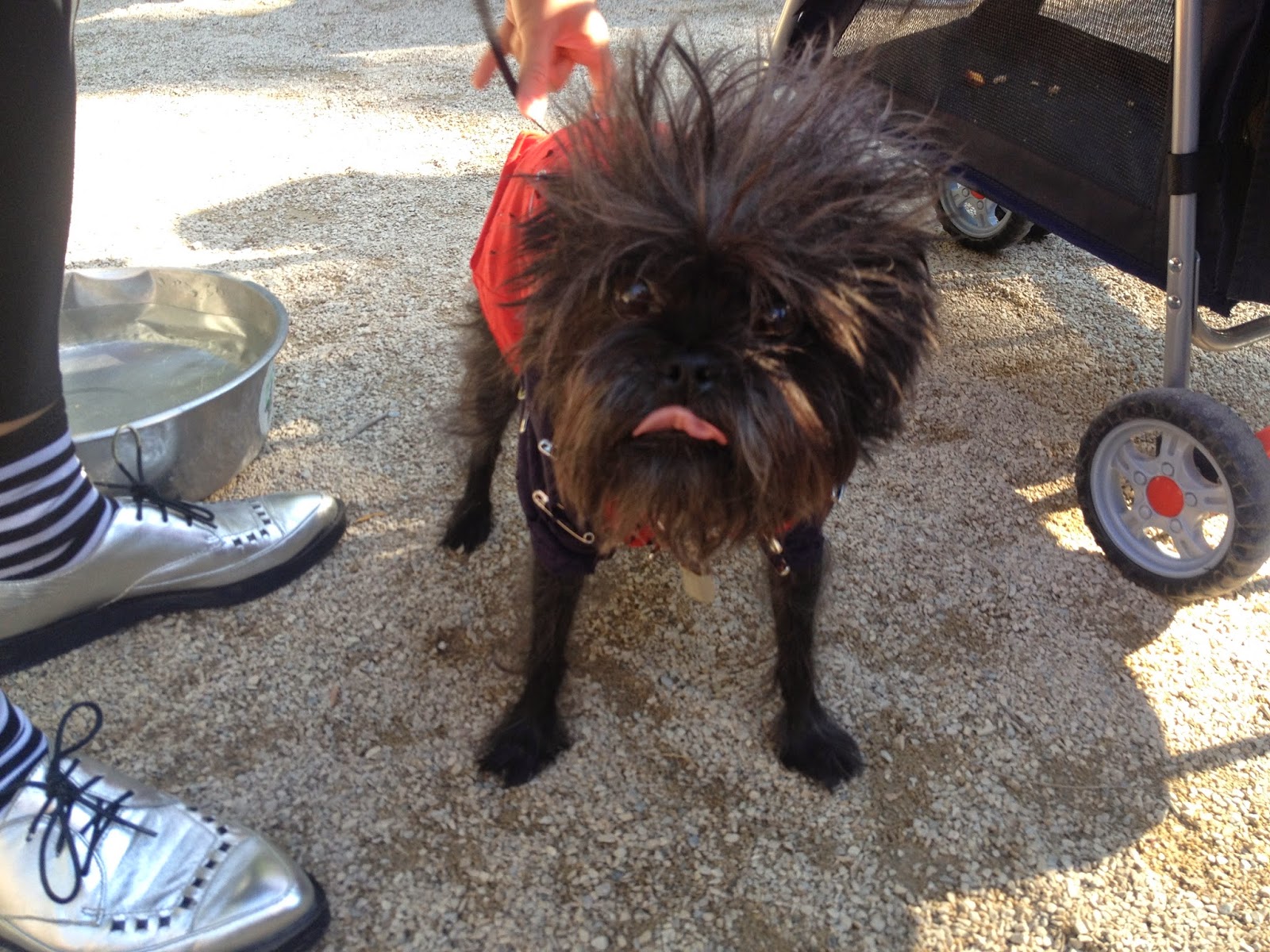 This line inched along imperceptibly, and after about 2 hours we finally made it to a sign that said "form line here."  This was the TSPHDP's 24th annual affair; I find it hard to believe that they are truly under the impression that this is a sufficient amount of signage.  It was at this point, also, that myself and those around me got wind of the fact that there was a $5 entrant fee; I'm still not clear where that went- it certainly wasn't obvious that it was a donation, but it was a small price to pay for the entertainment return.  In any event, once the fee was "donated," we were given a sticker with a handwritten number on it (we were 214) and directed into the actual TSP dog run (which, if you're not familiar, smells like a gigantic box of soiled kitty litter), where police barricades finally organized us into a winding line that led up to a stage with a short, astroturf runway.


It was a pleasure to be in a roomier, more organized space where you weren't so crowded and could actually see the costumes of those around you.  The most innovative and best executed I saw was a Frida Kahlo (scroll down in link to check out the amazing unibrow) that didn't snag a single award. More on that later.


In our direct line of vision was a crystal-encrusted dog sitting in a giant, baby-blue carriage led by a stuffed- horse…that did.  We'd seen this particular float navigating through the TSP crowds earlier; in fact, the accompanying human dressed like a fairy godmother had been admonished more than once by her human companion for rolling into her legs with the cart.  Now she spent the last hour of our wait constantly fluffing the tulle, which I later learned was custom created in the strictest of confidence. 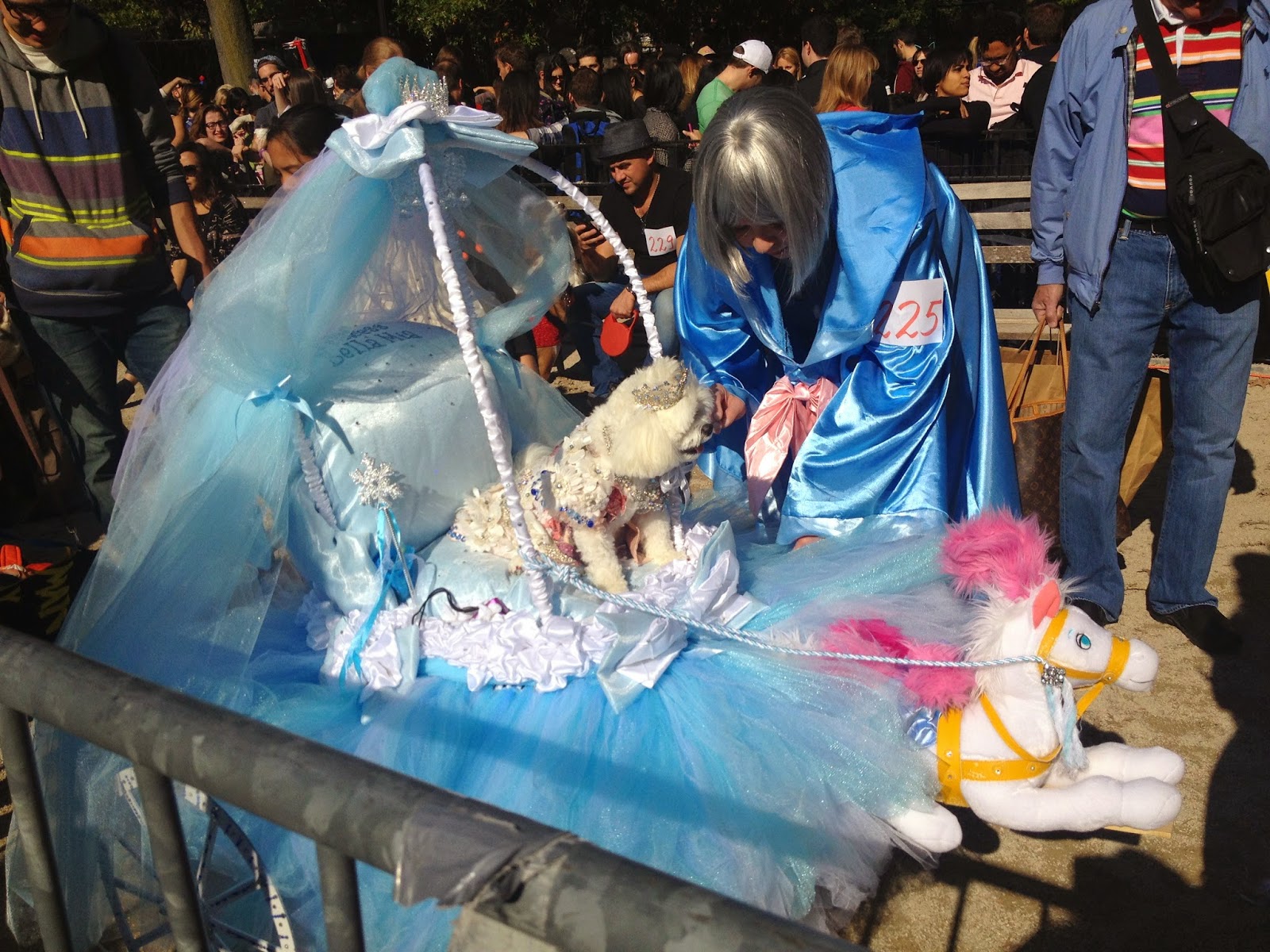 Point being, the next person who tells me 89 and I are crazy will be schooled on how sane we really are!


I was personally more impressed by the likes of this dog dressed as the NY skyline, but apparently the judges thought differently and awarded a prize to this skyline instead.  Yes, there are so many costumed dogs that there are repeats.  In fact, here's 89's HK counterpart. 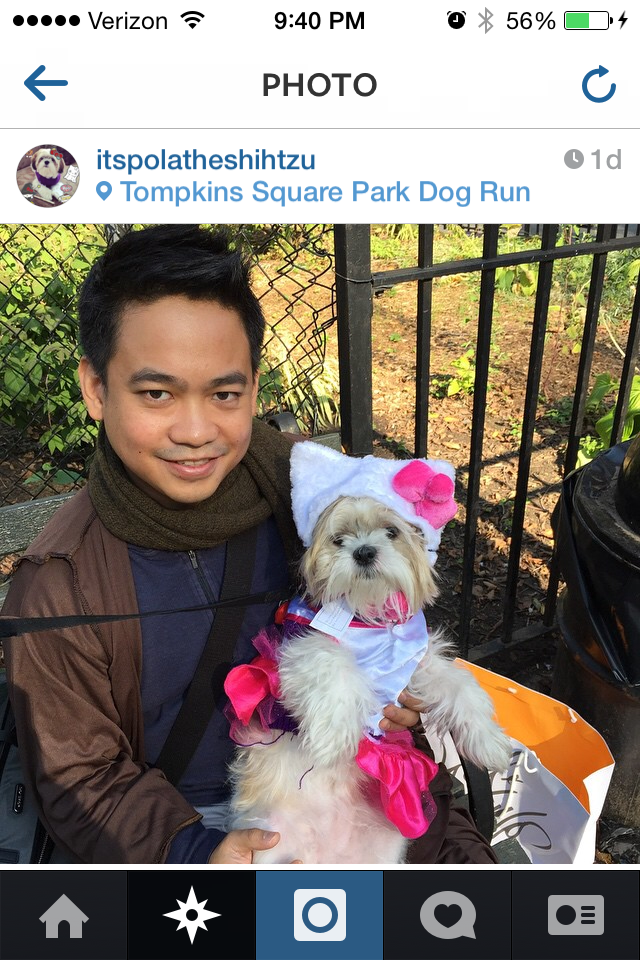 There were two "hosts" on the stage, but you couldn't hear what they were saying until you were within 20 feet of them, which was problematic in an of itself- both for participants and spectators.  One of them was Ross, who was going by Garrett for some reason, and I was excited to tell him how fabulous his purple, velvet blazer was.  Unfortunately, when it was finally our turn after a 2+ hour wait, we were directed to rudely walk right in front of Sid Viscious during his own long-awaited moment to shine, and then obviously hurried along by Ross/Garret who disinterestedly asked us:
Ugh.  Needless to say, 89 was even more disgusted than I was and flung her HK hat off the second I placed her paws on the astroturf.  She walked the 12-foot runway (i.e. not a parade) sans headgear and the moment we faced the judges I replaced it to audible, but short-lived "ooohs."  Before we knew it, it was over.  3 hours of waiting in a crowded line to be rushed through the judging and that was it; we were directed into the crowd where it was once again nearly impossible to hear the rest of the festivities, including the winner announcements.  No matter, the person standing next to me put it best when he opined that if they were only going to award prizes to dogs on floats (which is the type of regalia that would befit an actual parade), they should save everyone else the time.  I have to say I somewhat agree, although my suggestion would be that the whole event be revamped into a significantly more organized affair with an actual parade through the park and categories that would include and celebrate more of the cross-section of entrants.


Ultimately, this event in its current state is like the Christmas decorations in Dyker Heights: it's super fun to look at all of them, but that doesn't mean you're own light-up Santa is any less important.  In fact, it has a ton more heart than paying someone to decorate for you.  Believe us when we say that we went for the fun and certainly didn't want or need a prize- particularly from the non-vegan dog treat company sponsor, but we would have appreciated if the whole ceremony wasn't based entirely on the spectacle. 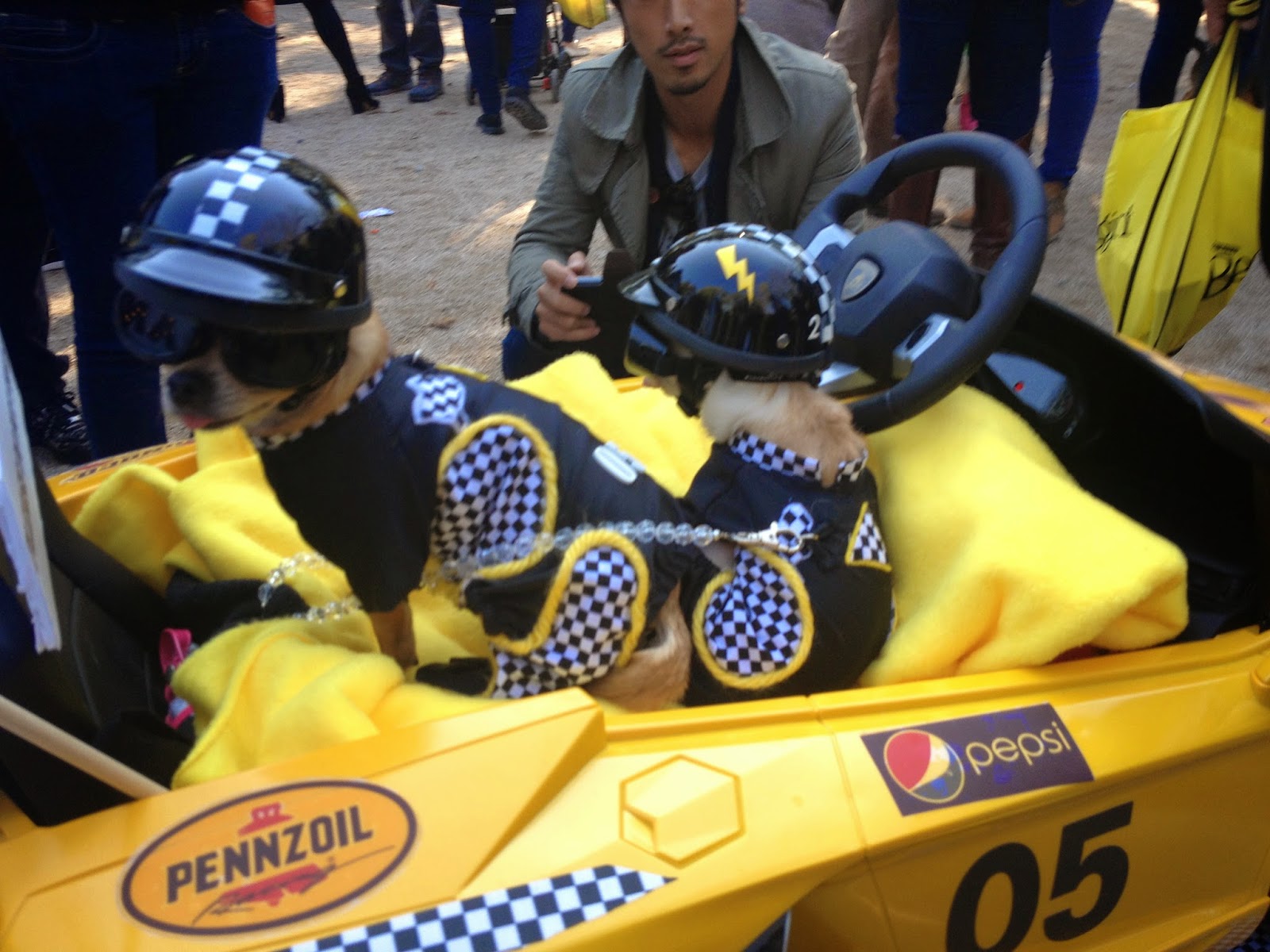 Instead, it could be generally more inclusive of all: including the understated.

89 spent much of the rest of the day with her exhibitionist pal, OMJ. 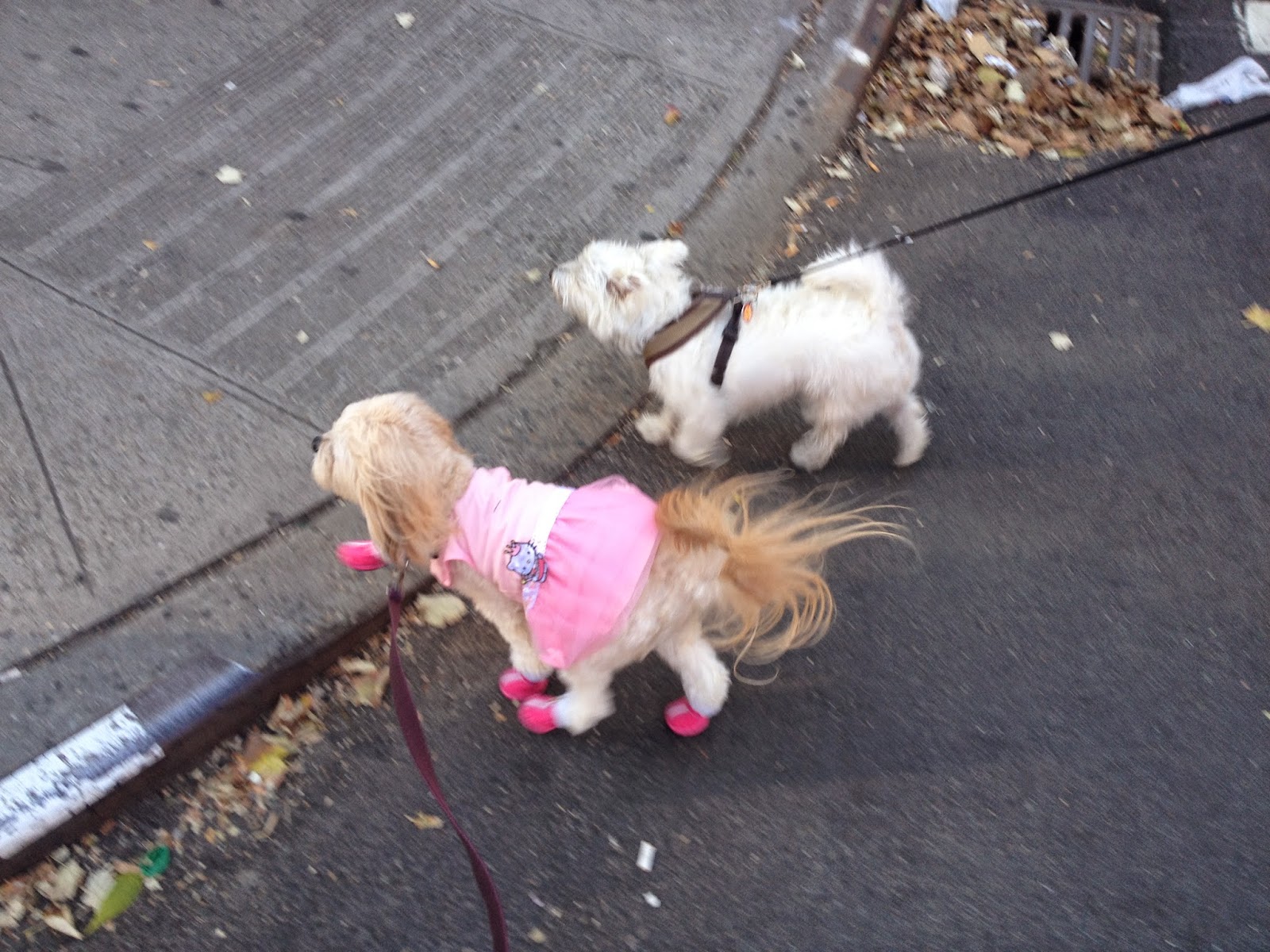 We went to Mooshoes' anniversary party. 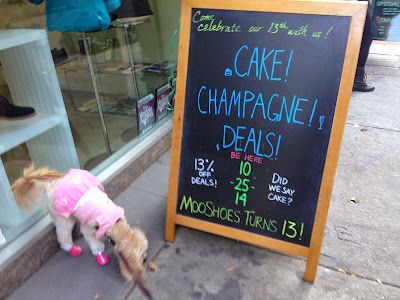 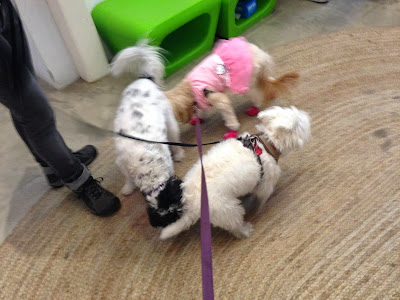 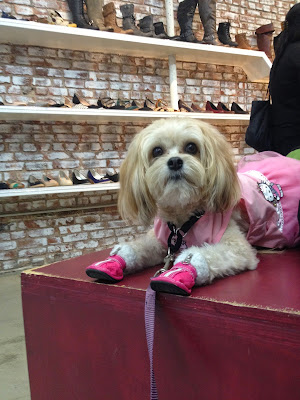 Then to Ricky's Pup-up shop. 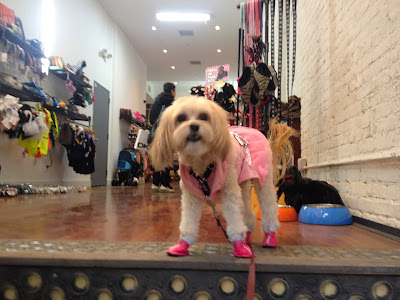 Then dinner.  Then dessert, at which time she had to layer. 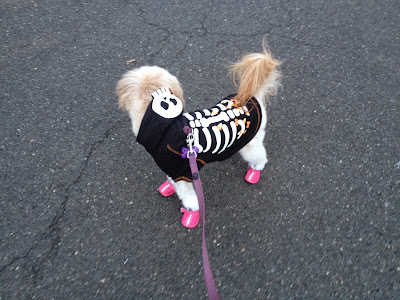 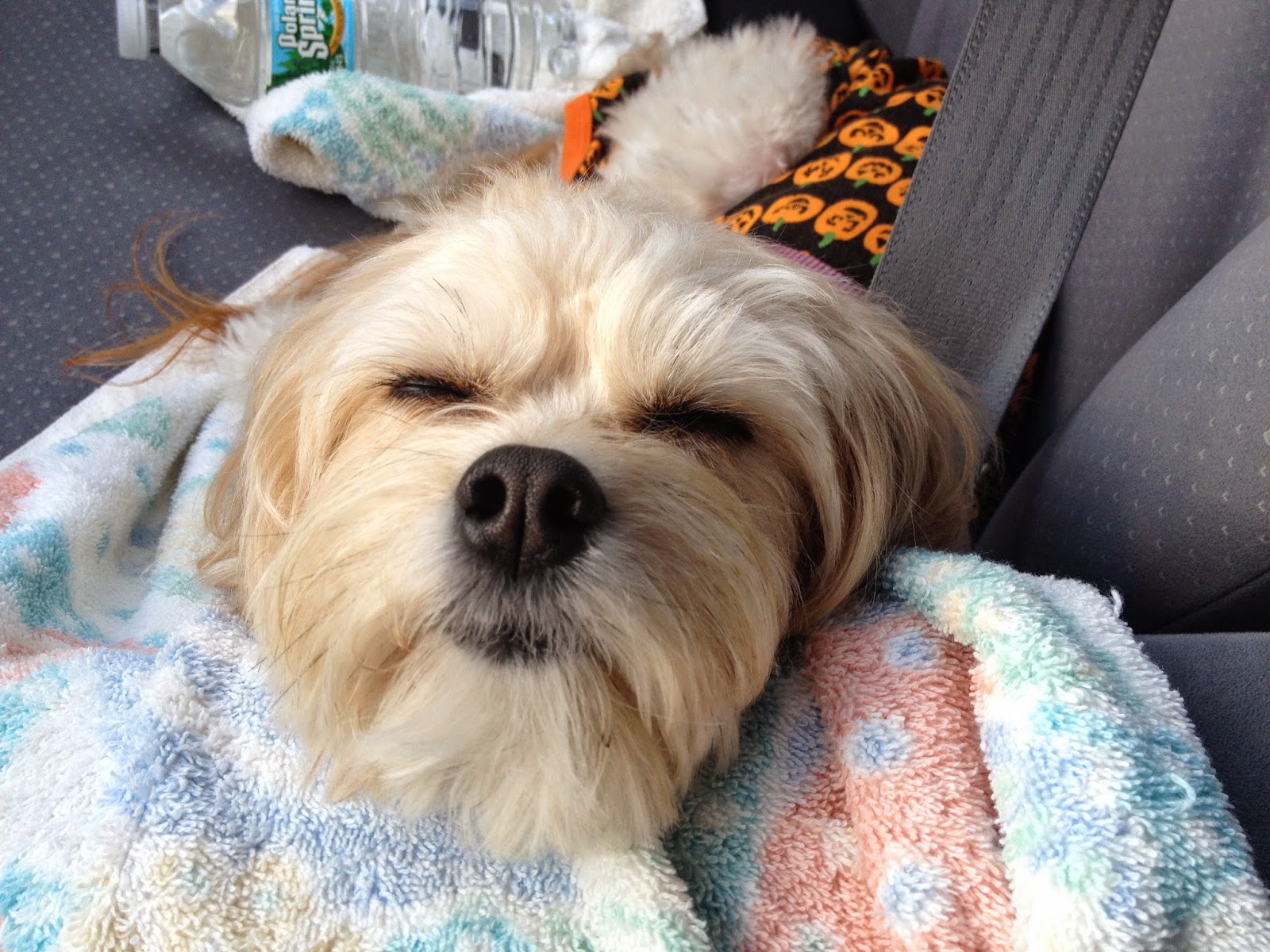 But there were more Halloween eats to be had!

I picked up this pumpkin pie donut from The Cinnamon Snail. 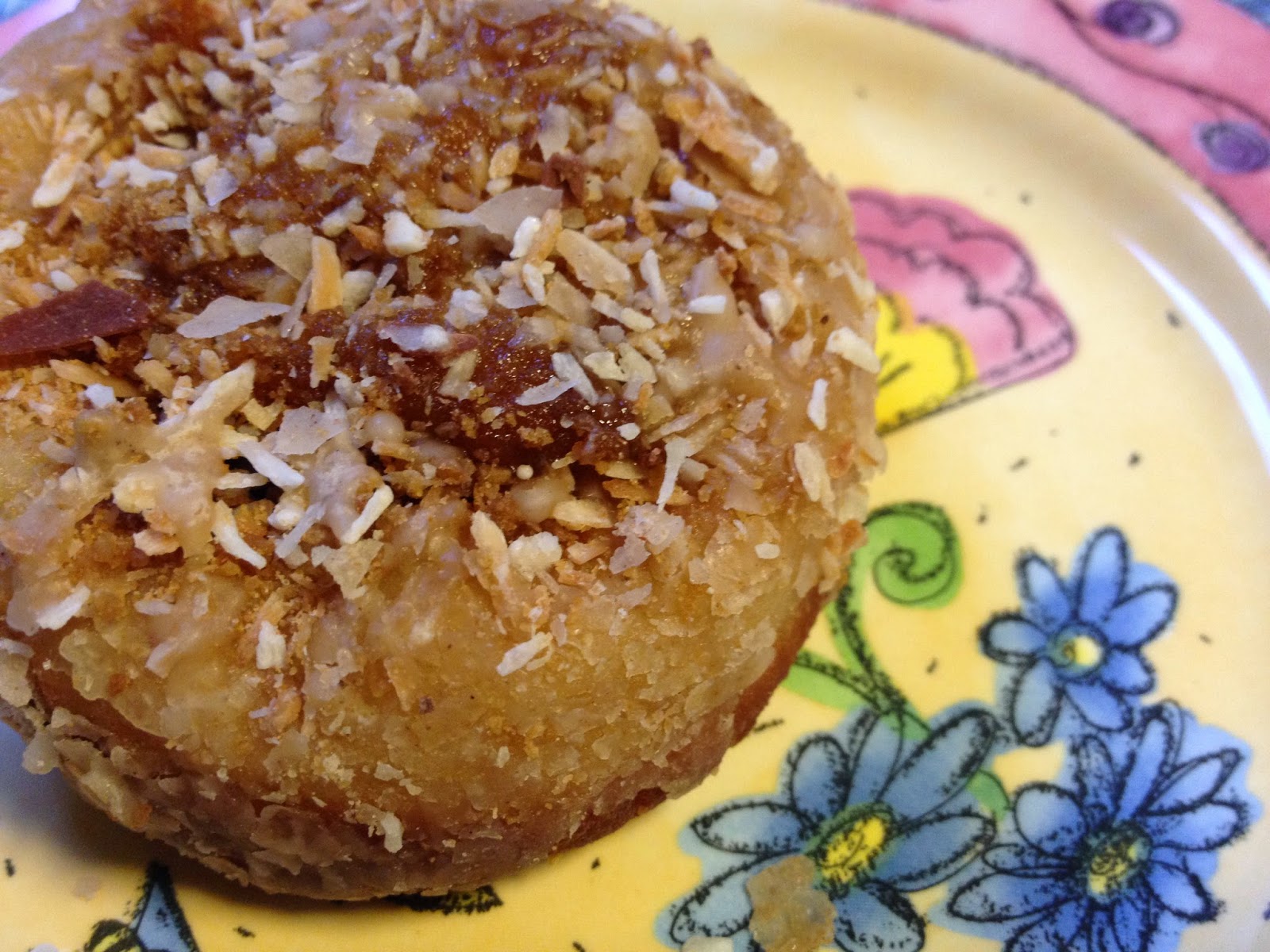 And a zillion donuts from Vegan Treats! 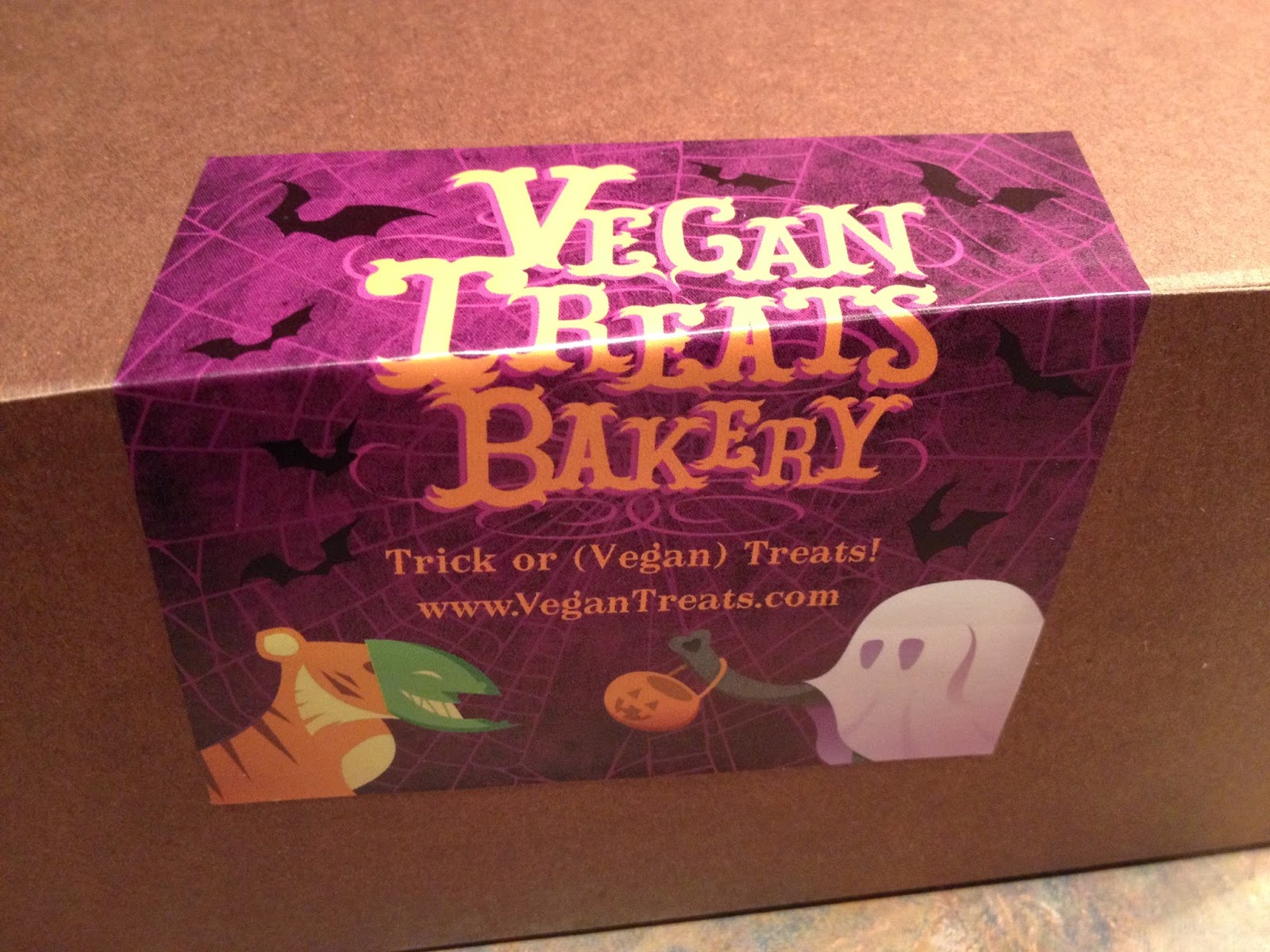 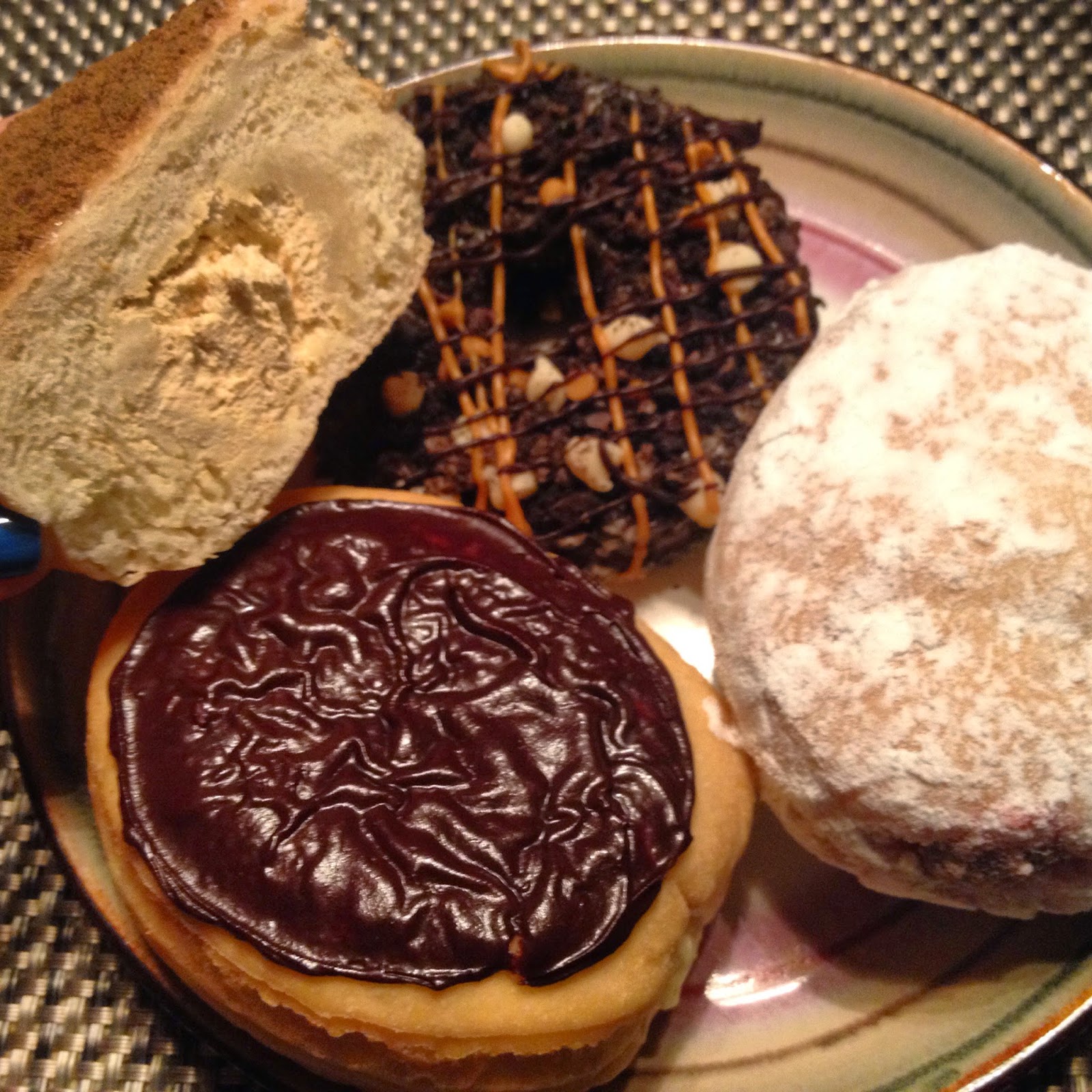 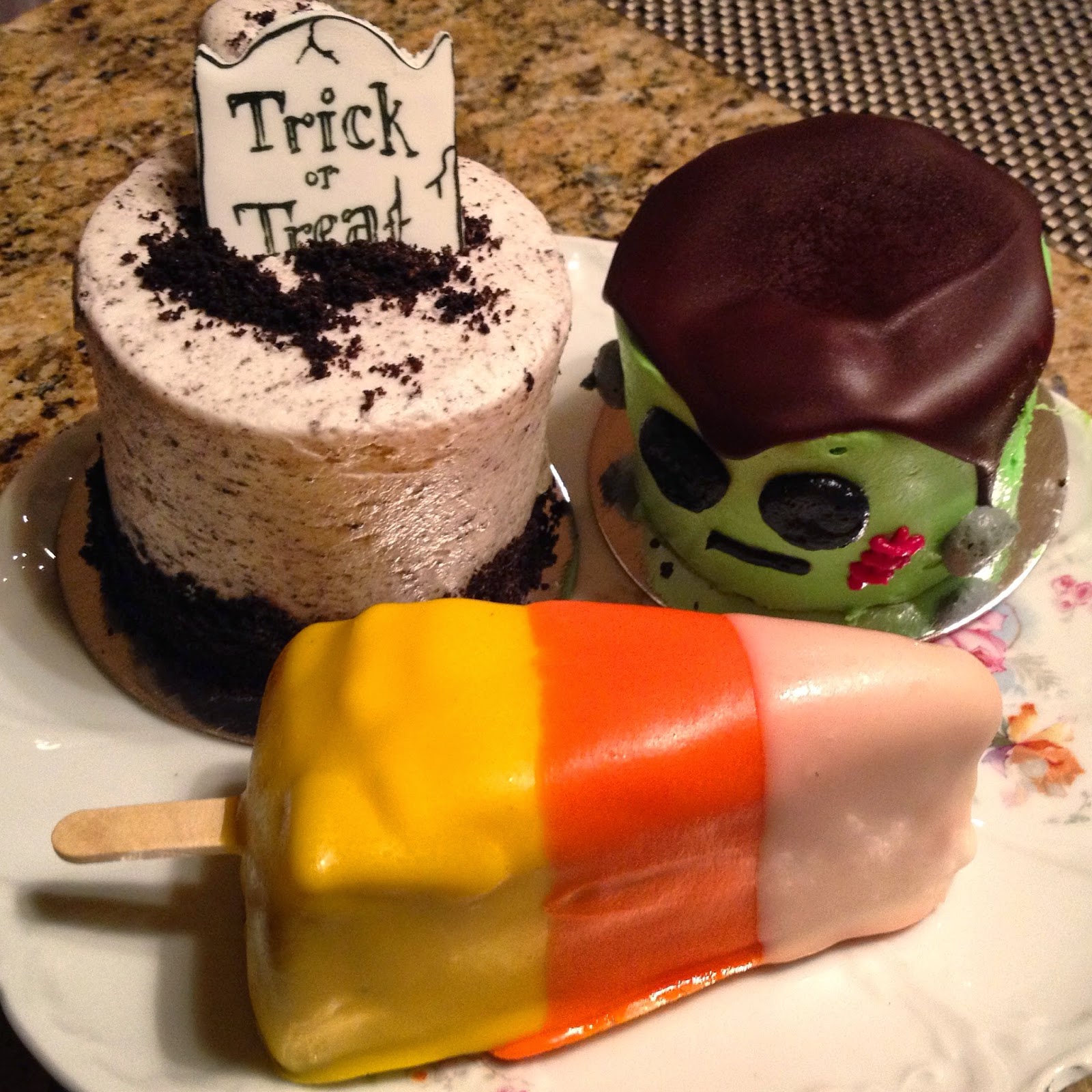 Frankenstein blew me away with a butterscotch center! 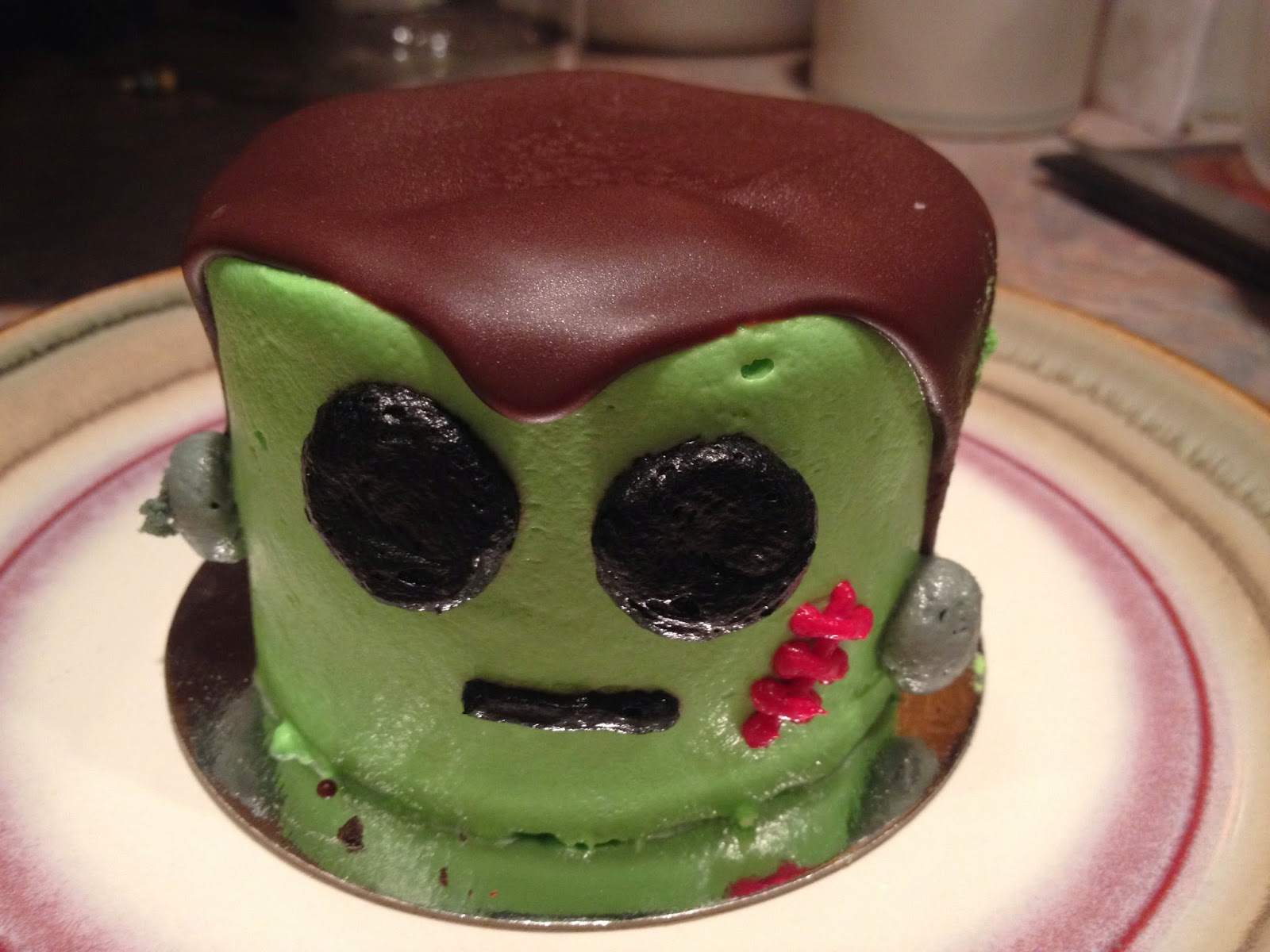 Oreo graveyard: the only dirt I tolerate. 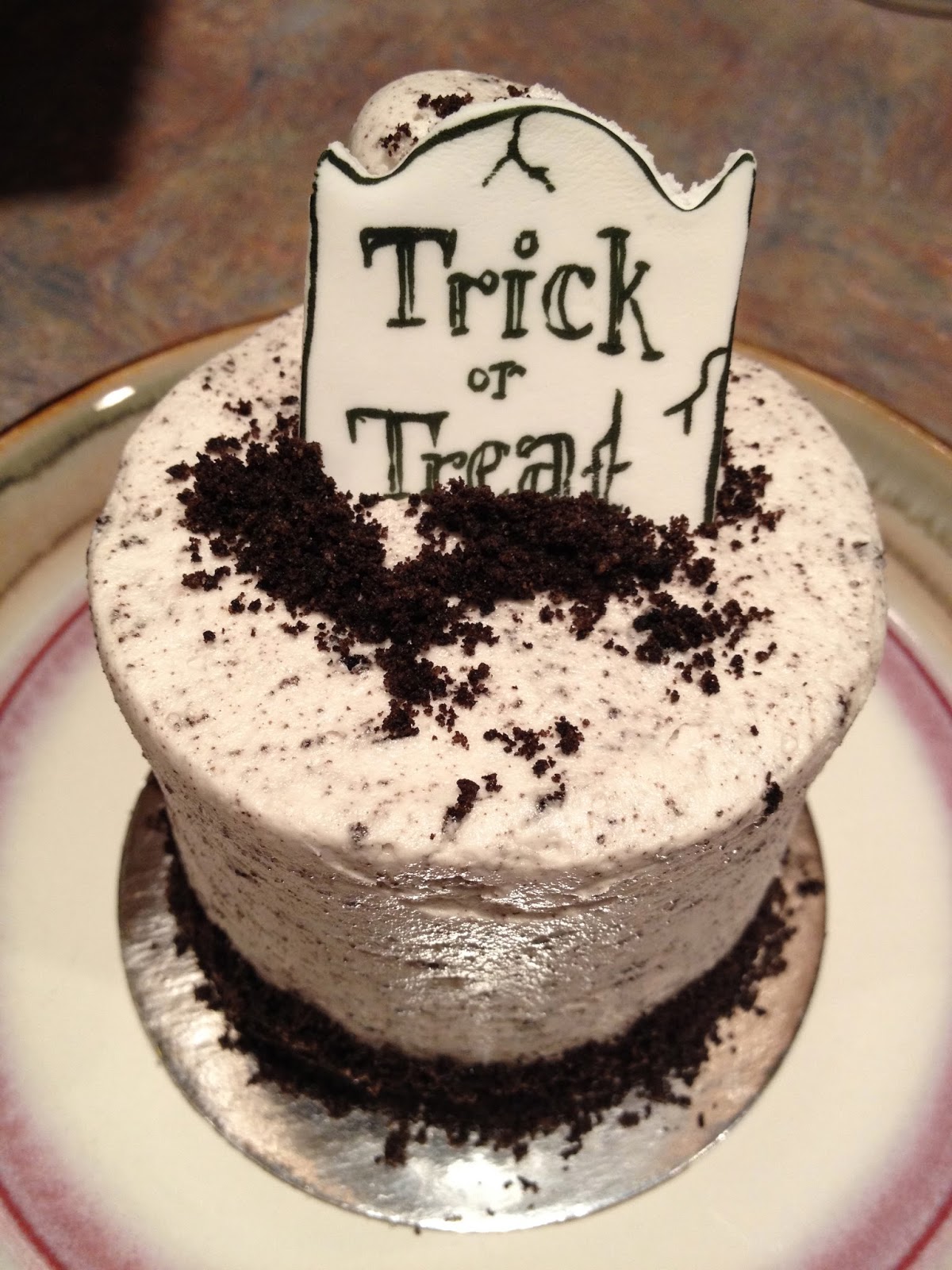 And a gingerbread skeleton. 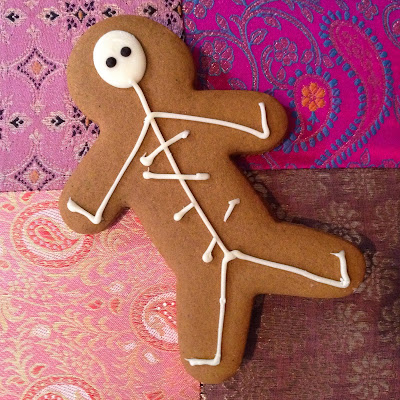 Non-edible goodies for 89 included a bag full of orange balls and, of course, a Halloween-themed hedgehog. 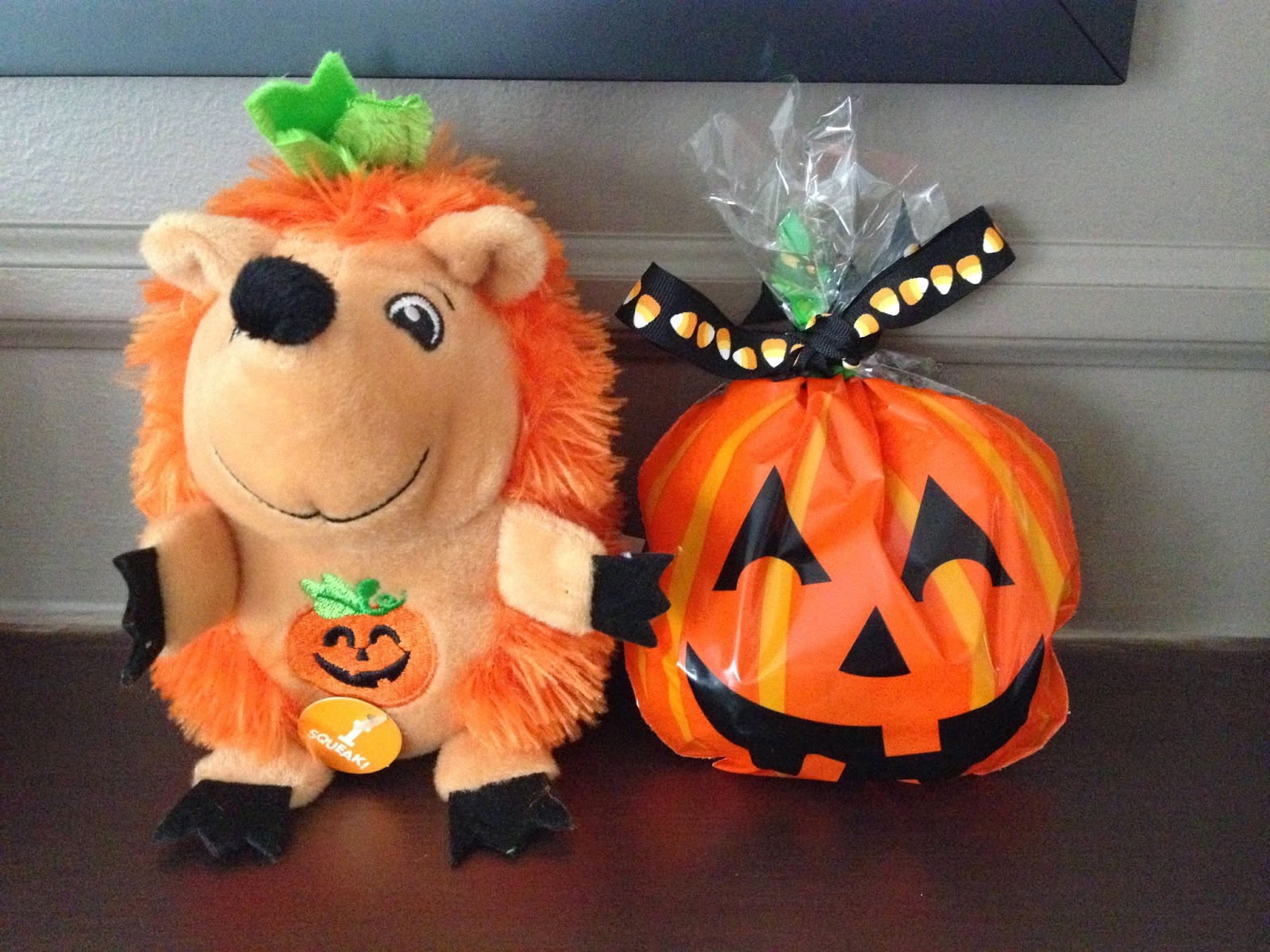 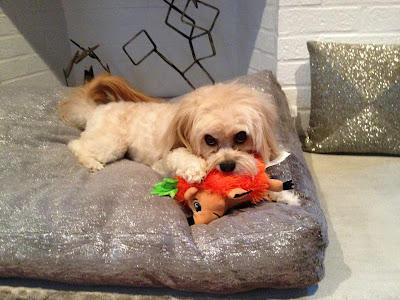 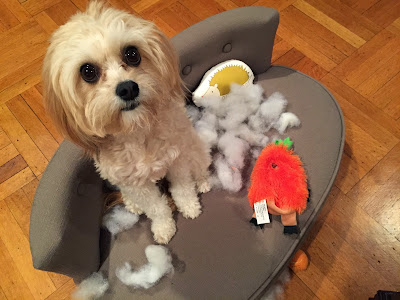 And this was all before Halloween! 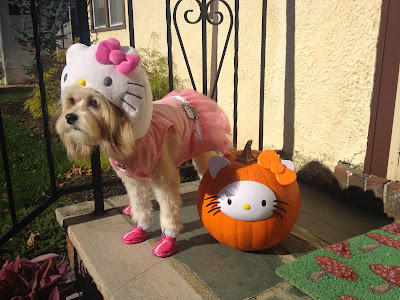 It was too chilly to open the door to trick or treaters as Hello Kitty, so 89 swapped for a bumble bee. 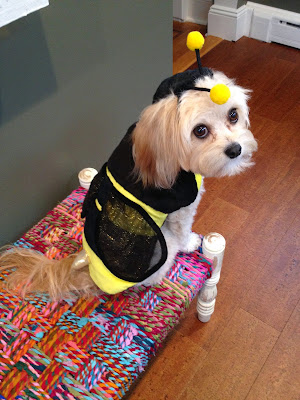 And then it started raining and we had to have yet another wardrobe change into a vegansaur. 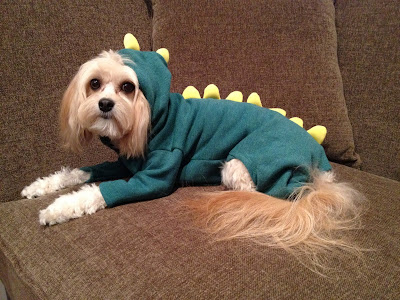 We didn't have as many treaters as usual, probably because of this menacing figure. 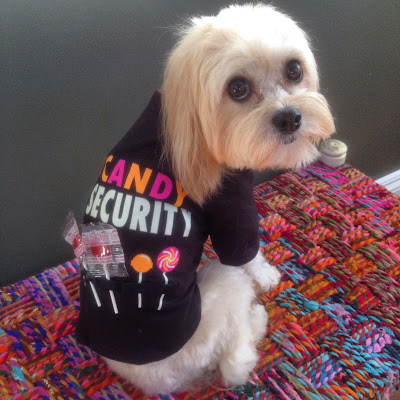 It was an exhausting and delicious Halloween; we hope you enjoyed it as much as we did!