The Vast Disappointment of Cocoa V 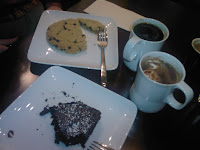 As a chocolate lover and huge fan of both Blossom and Cafe Blossom (now Blossom Uptown), I was very excited when I heard about the impending opening of Cocoa V. Then, when I read a description on SuperVegan likening it to a vegan Godiva- I swooned. I hurried over there one Saturday morning after ten to find it closed, even though the brand new website clearly stated 10:00am as the opening time. I waited until almost 11:00 and then left.
Fast forward a few days and I ducked in on a weekday evening after work. From the outside it does indeed look like a vegan Godiva and I bounded in. Unfortunately, my excitement was short-lived. There were about eight people working there and our presence was not so much as acknowledged. On the counter was a truffle pulverized into minuscule truffle crumbs: presumably "tastes"; kind of chintzy when you're used to Rose City Chocolatier's friendly and generous offerings of whole candies while you order. To make matters worse, as we stood around awkwardly waiting to be greeted and/or offered a seat in the cafe, the owner entered and added to the unfriendly atmosphere by completely ignoring us as well. I admit we almost walked out.
Instead, after waiting to try to catch someone's eye we ultimately asked for a table in the otherwise empty cafe. Once seated, the waiter immediately told us what kind of wine they were offering that evening. Yup, that's wine: singular. Now, I'm not personally into wine, but the person I was with is and we had both assumed that someplace tauting itself as a chocolate and wine bar would have at least a minimal selection of both. Not so apparently.
Worse yet, the food offerings were wholly misrepresented both on the menu and the website. They didn't have any of the cakes listed on the menu- including the chocolate raspberry my companion had decided upon and the chocolate peanut butter I had heard raves about and wanted to try. We were told that they were "specials" (Really? On the permanent menu?) and that instead the offerings were....lemon cake, chocolate cake, brownies, and chocolate chip cookies: kind of boring. To add insult to injury, when I attempted to order the crepes and nutella advertised on the website I was told that they "are working on that". Ugh. I lost count of how many strikes we had tallied thus far.
So, we sat in the desolate cafe listening to Fleetwood Mac and waiting an inordinately long time for our 11th choice desserts. We stared questionably at the place settings that consisted of miniature stages for chocolate that should have been removed when we didn't order any. When our desserts arrived, the waiter chose to leave the unnecessary place settings where they were and placed our actual desserts on the end of the table opposite us: leaving us to rearrange things ourselves so that the useless stages were pushed aside and our actual eats were within reach. So not cool and hardly befitting an upscale establishment.
And then we finally began to enjoy our desserts: the chocolate chip cookie was good, but I can grab the same one anytime at Cafe Blossom. Even though I'm not normally a fan of brownies, this one was surprisingly good because it was more of a light, moist, chocolatey brownie/cake hybrid with chocolate chips. The hot chocolate was thick and tasty, but after about half of the mug it was obvious that it was entirely too rich even for this ardent chocoholic.
With some treats in our bellies we were finally enjoying more than each other's company when the owner and another worker entered the cafe, stood nearby, and began having a discussion about how dim the lights should be. Sigh. Call me crazy, but perhaps you should focus on acknowledging the mere presence of your customers rather than discussing the ambiance you're currently ruining by rudely chit-chatting nearby?
Needless to say, we quickly finished our desserts and left.
Ironically, it was one of the owners of Lula's Sweet Apothecary who first clued us in about the impending opening of Cocoa V. In the future when I'm in need of a delicious fix of sweet dessert I will be sure to head over to Lula's instead: exquisite offerings, terrific service, incomparable atmosphere, and no pretense.
Cocoa V's business card reads: Chocolat Perfecto.
Far from it.
Posted by Abby Bean at 11:57 AM