In response to my pizza recommendation to just about everybody, Jess Scone advised me to get to Paulie Gee's as soon as possible. I really did try, but it's kind of out of the way of my usual haunts and they don't take reservations (nor do they offer takeout or delivery, FYI). But, one recent evening after a couple of friends and I went to PaintNite, we decided to trek there for some carbstrong grub. 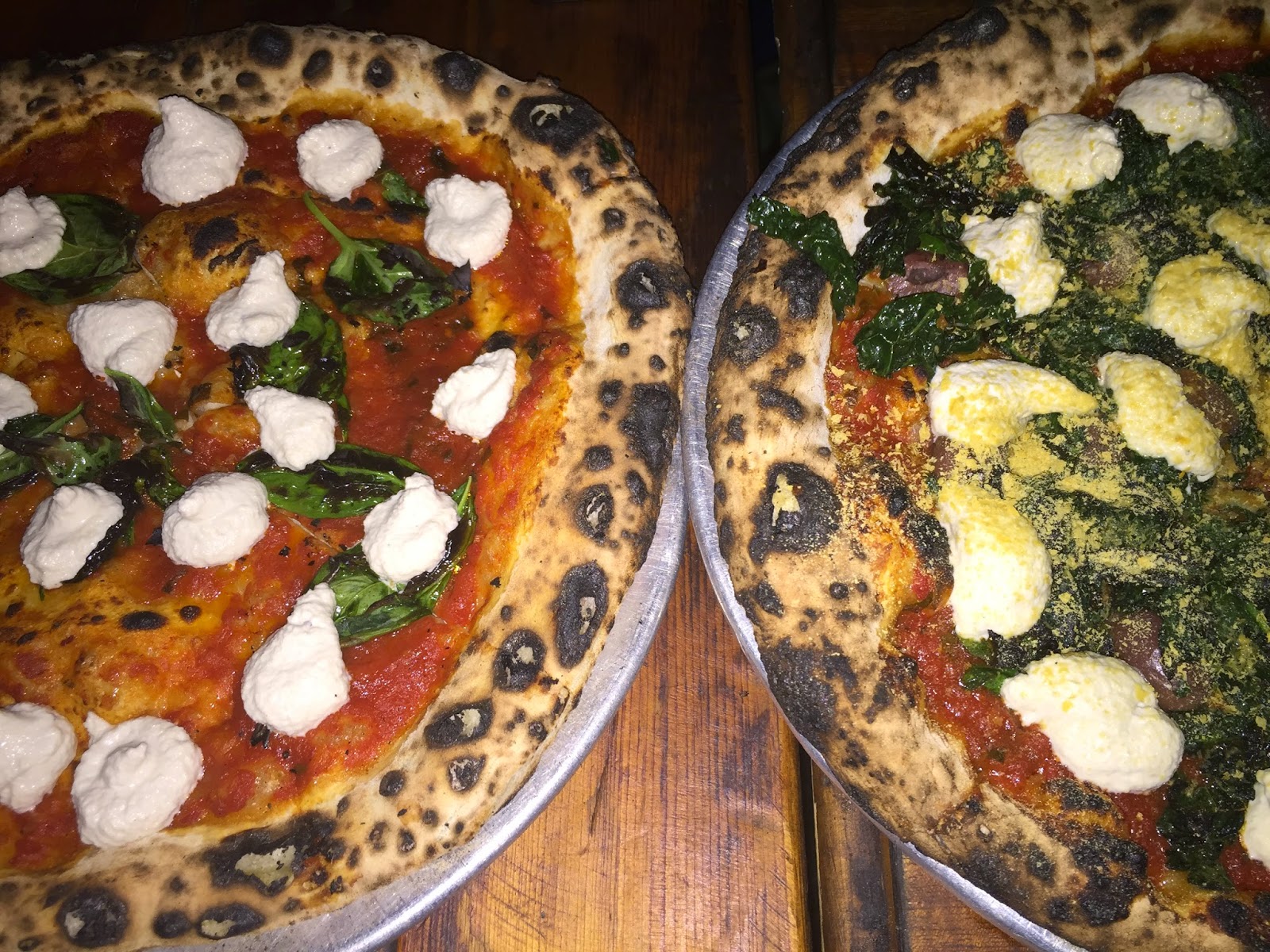 We got there about an hour and a half after they'd opened for the evening, which meant that the queue of folks who had been waiting for the doors to open precisely at 5:00pm had already eaten and were replaced by a second round of equivalently-timed diners. We figured it would take us a good long while to decide on and travel to an alternate dinner option, so we waited...and waited. Along with plenty of other pizza-loving schmucks we waited. And drank a little (they serve beer and wine)...and snacked on some things we'd purchased earlier in the day at the Winter Village in Bryant Park. 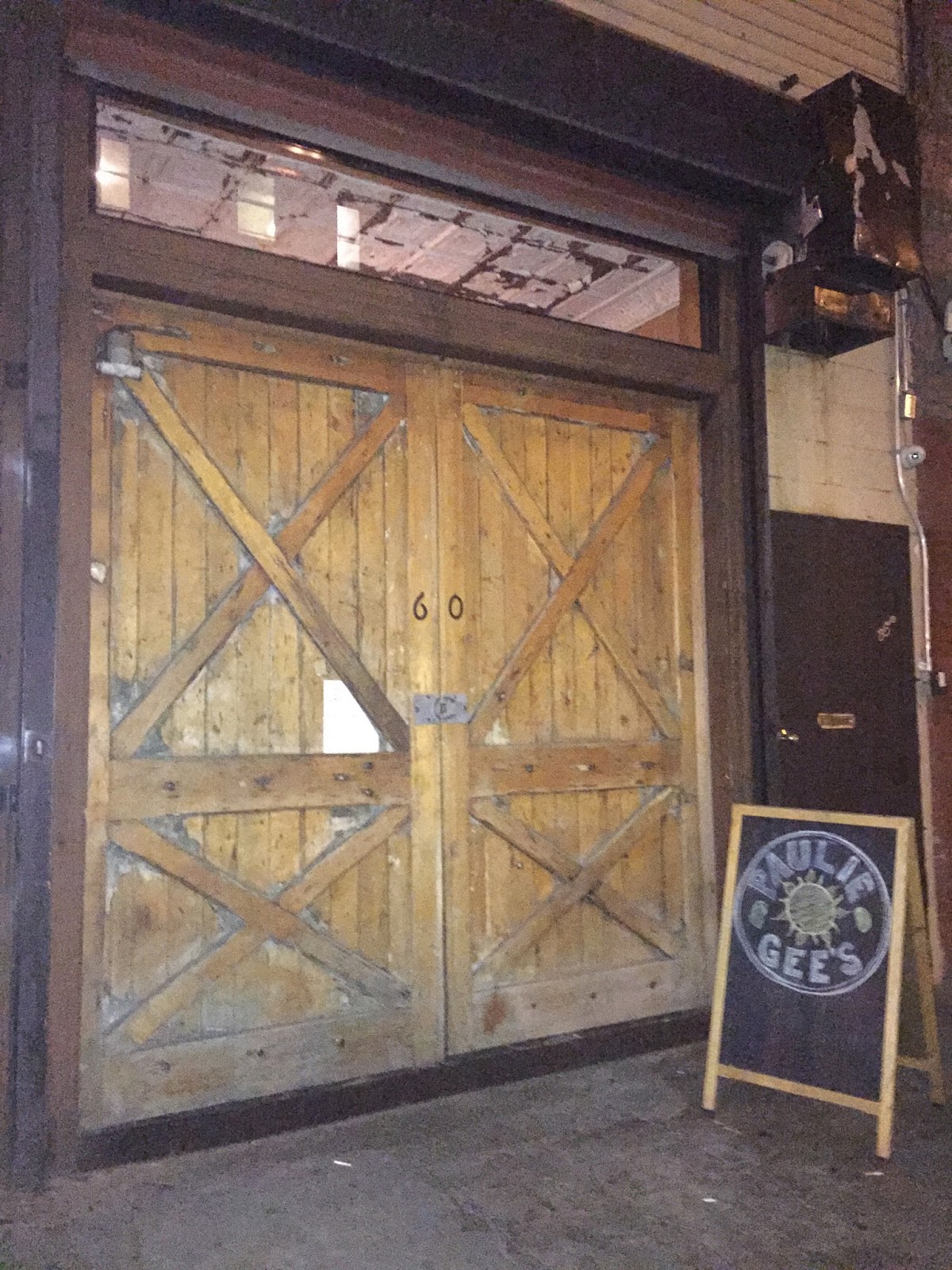 After about an hour and 45 minutes we were finally seated and got our hands on the coveted vegan section of the menu. Behold: so many house made items! 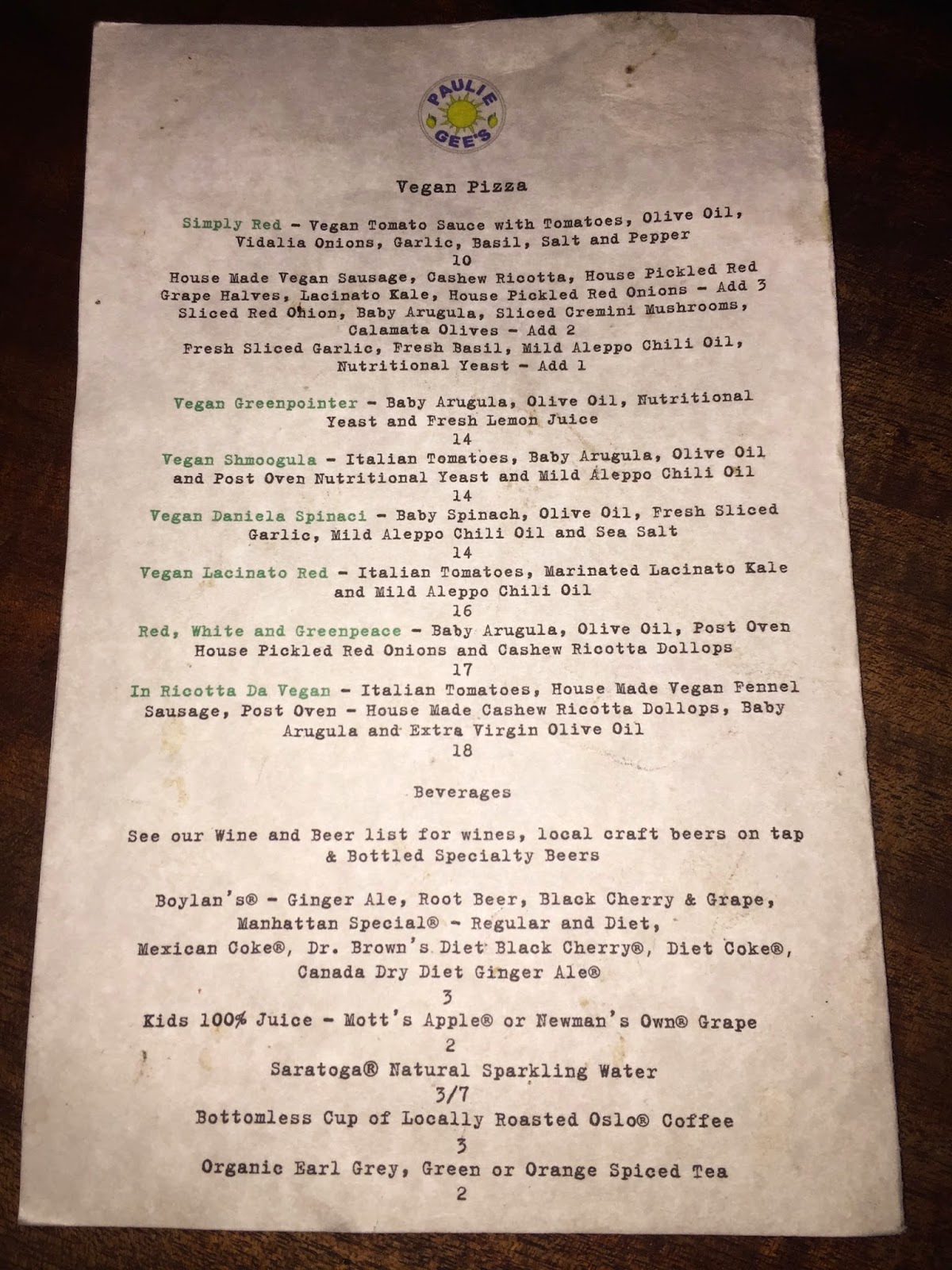 Once I was able to tear my eyes away from the multiple, gourmet pizza options I looked up and was surprised to find that Paulie Gee had made an exception* and was showcasing an original JD on his typically bare and rustic restaurant walls! 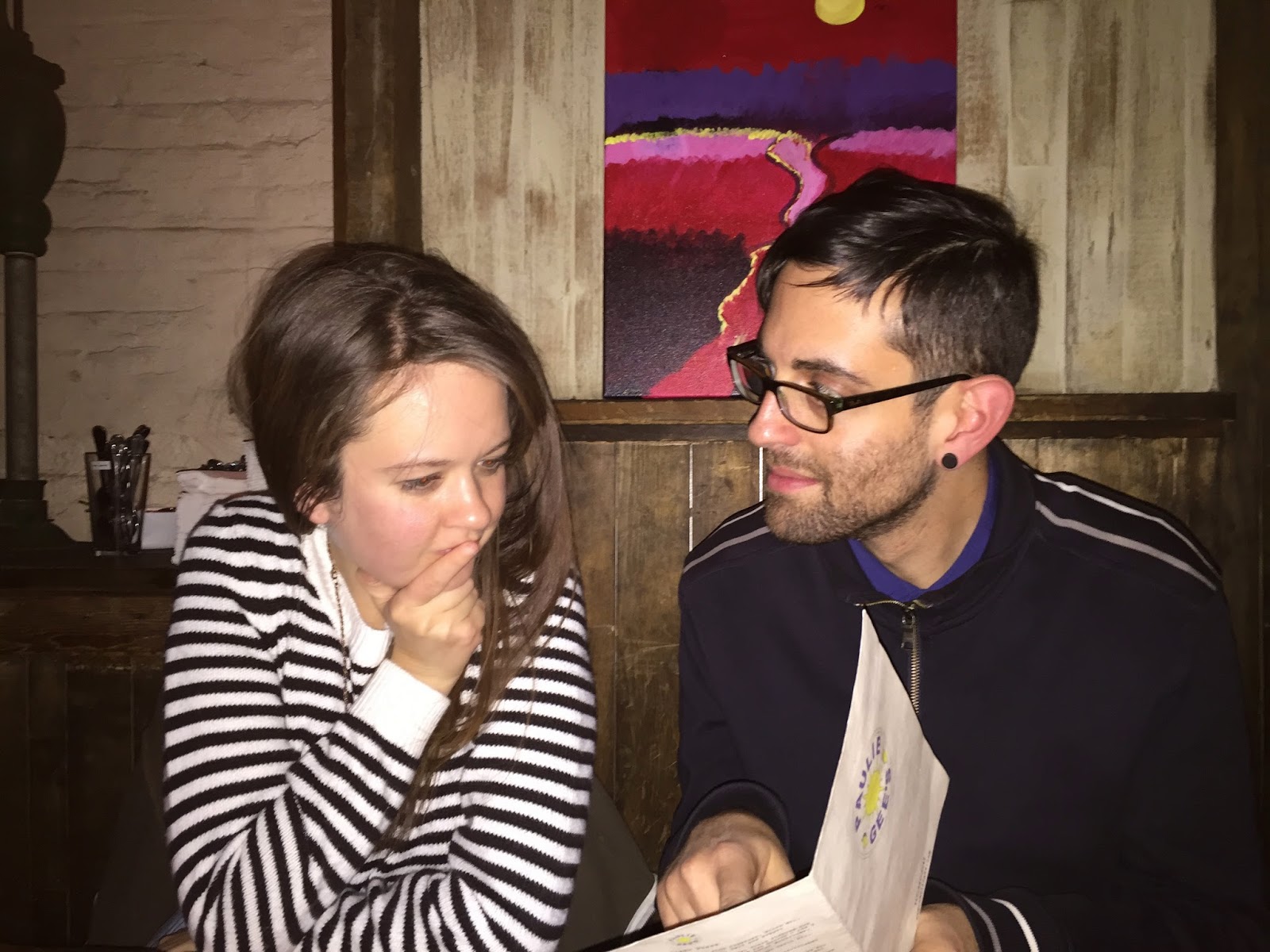 This phenomenally cultured atmosphere only made us hungrier; we ordered a giant pie each with the intent to share.

JD had visited before, so he knew that the In Ricotta Da Vegan: with vegan tomato sauce, house made vegan sausage, post-oven house made cashew ricotta dollops, baby arugula and extra virgin olive oil was the way to go. 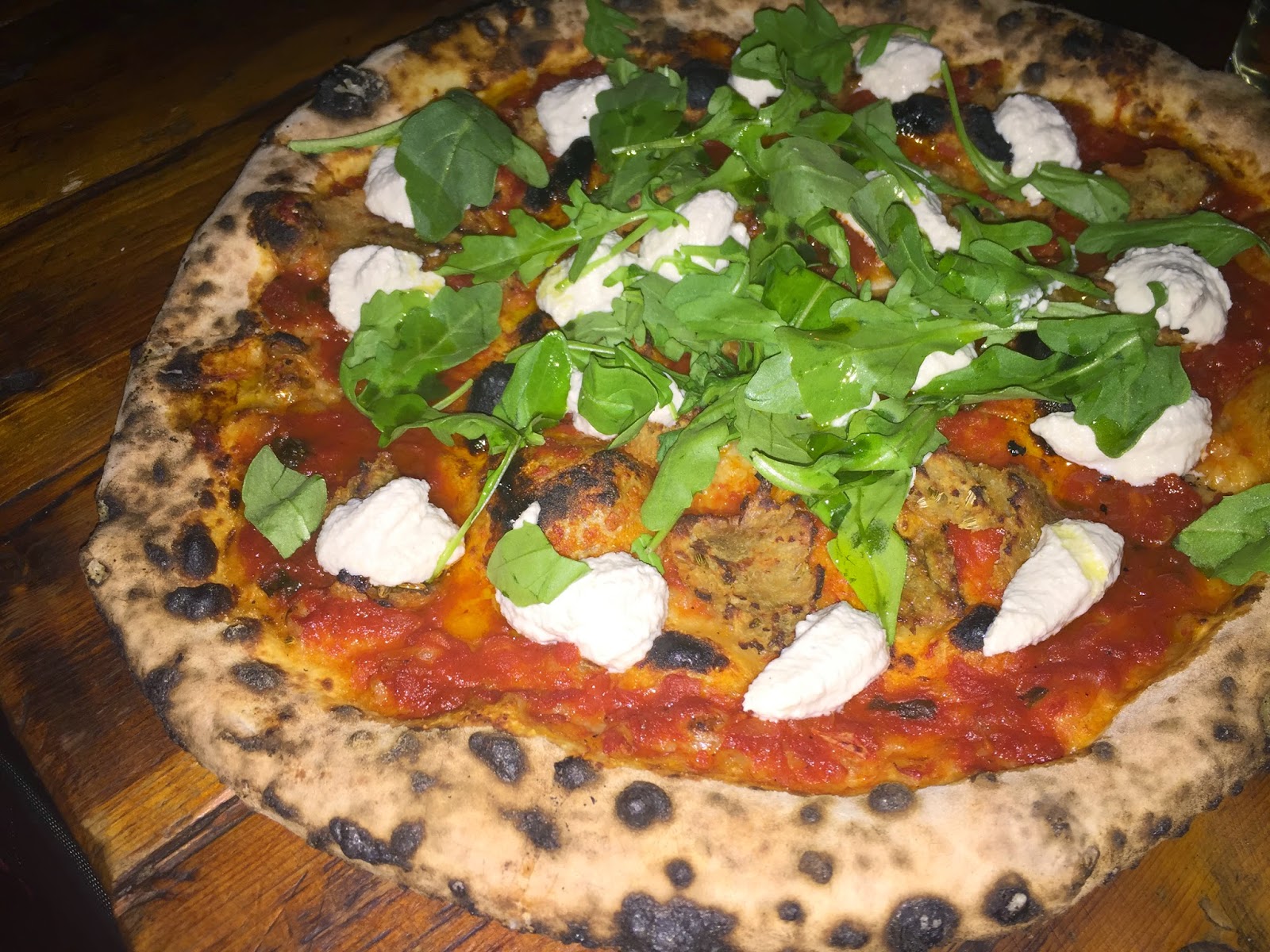 It was an excellent choice: a great combination of fresh flavors and textures. 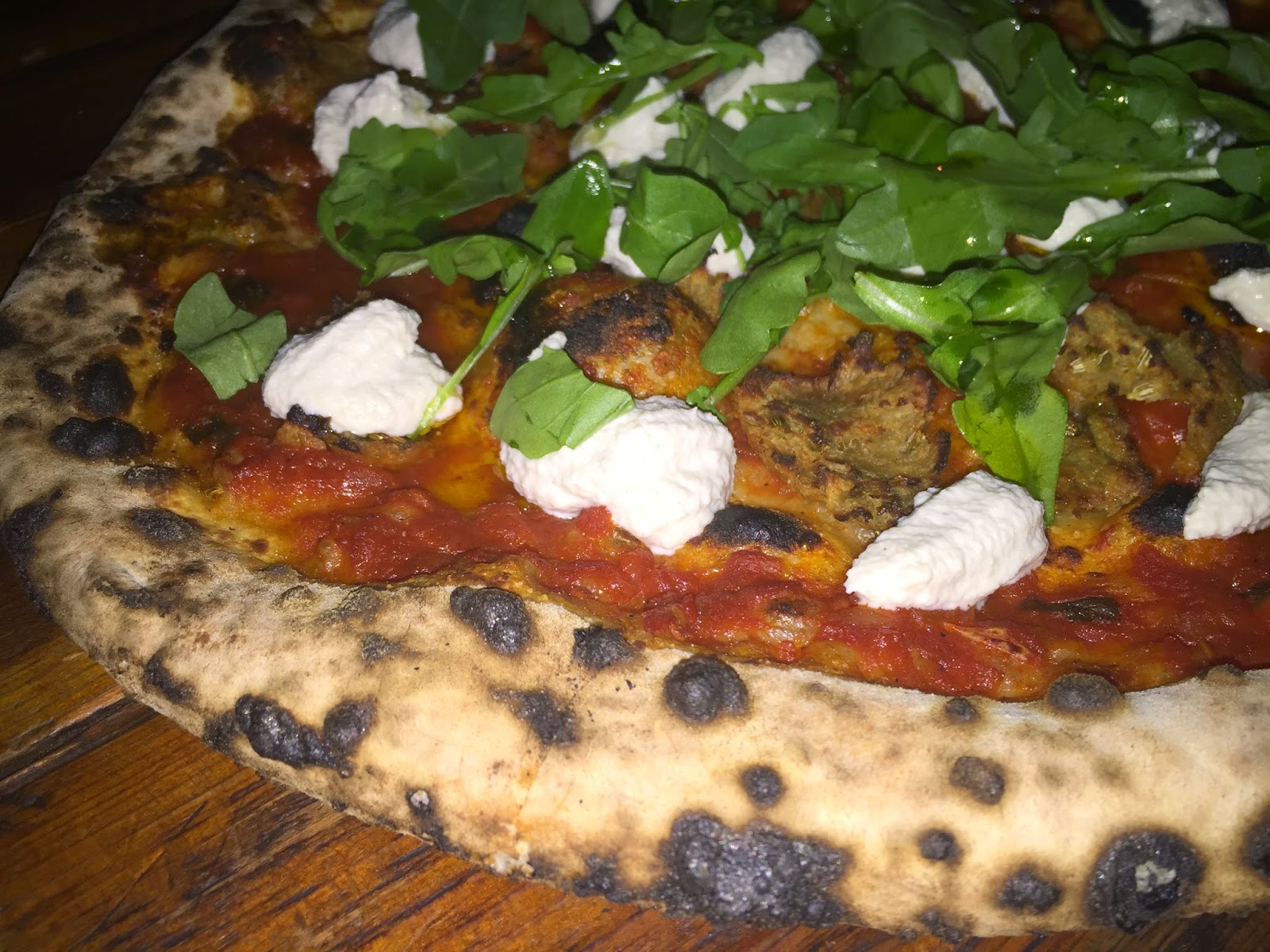 It had seemed unusual to us that the only vegan cheese was a ricotta instead of a mozzarella, but JD advised us not to skip it and he couldn't have been more right.

Our pal, Pecan, who always chooses "plain," went with the Simply Red: with vegan tomato sauce with tomatoes, olive oil, vidalia onions, garlic basil, salt & pepper AND added cashew ricotta. I'm a topping-overload girl myself, but this too was a winner. 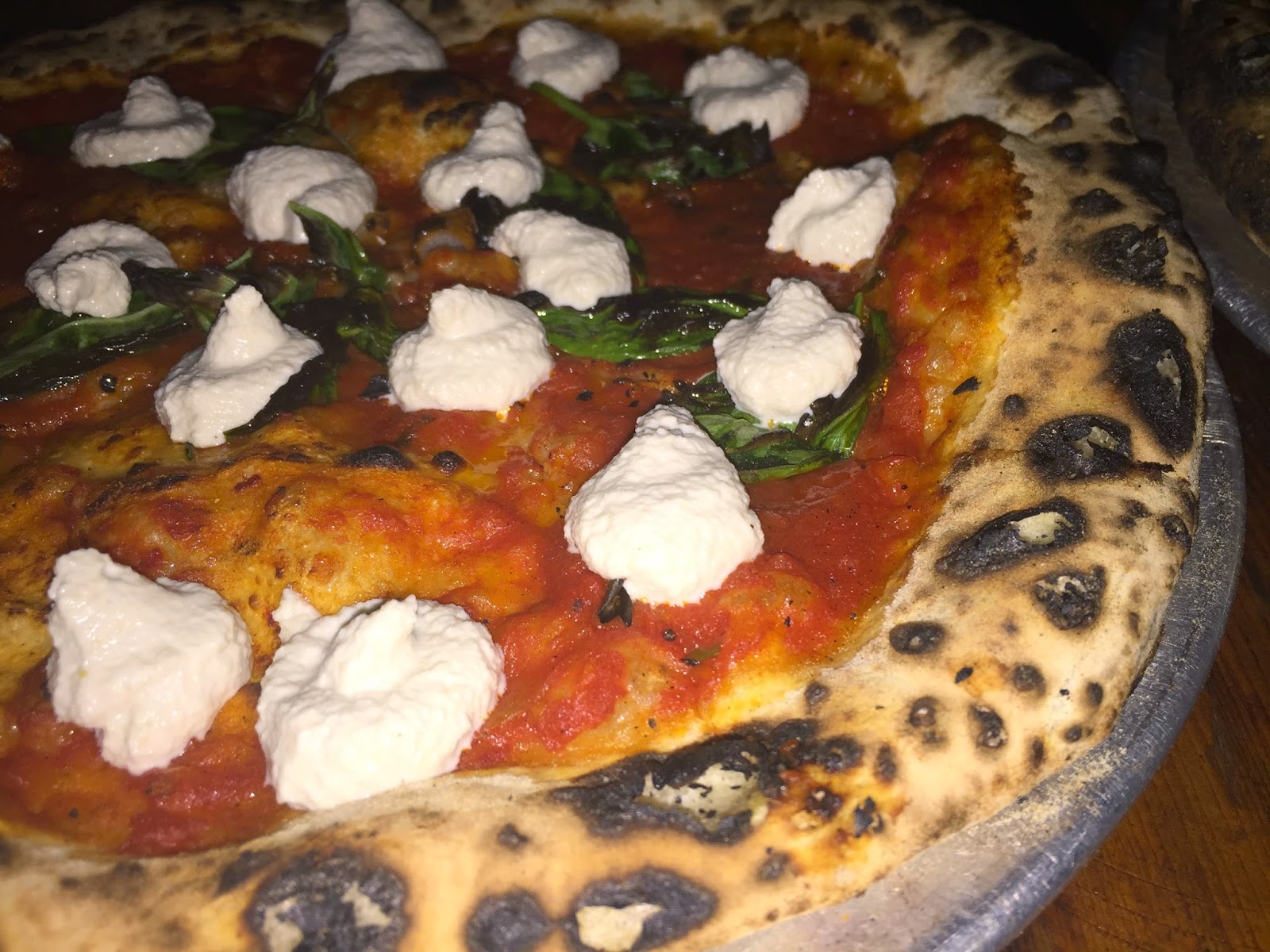 As for me, I also ordered the Simply Red, but I added the cashew ricotta, kalamata olives, kale (duh), and nutritional yeast. 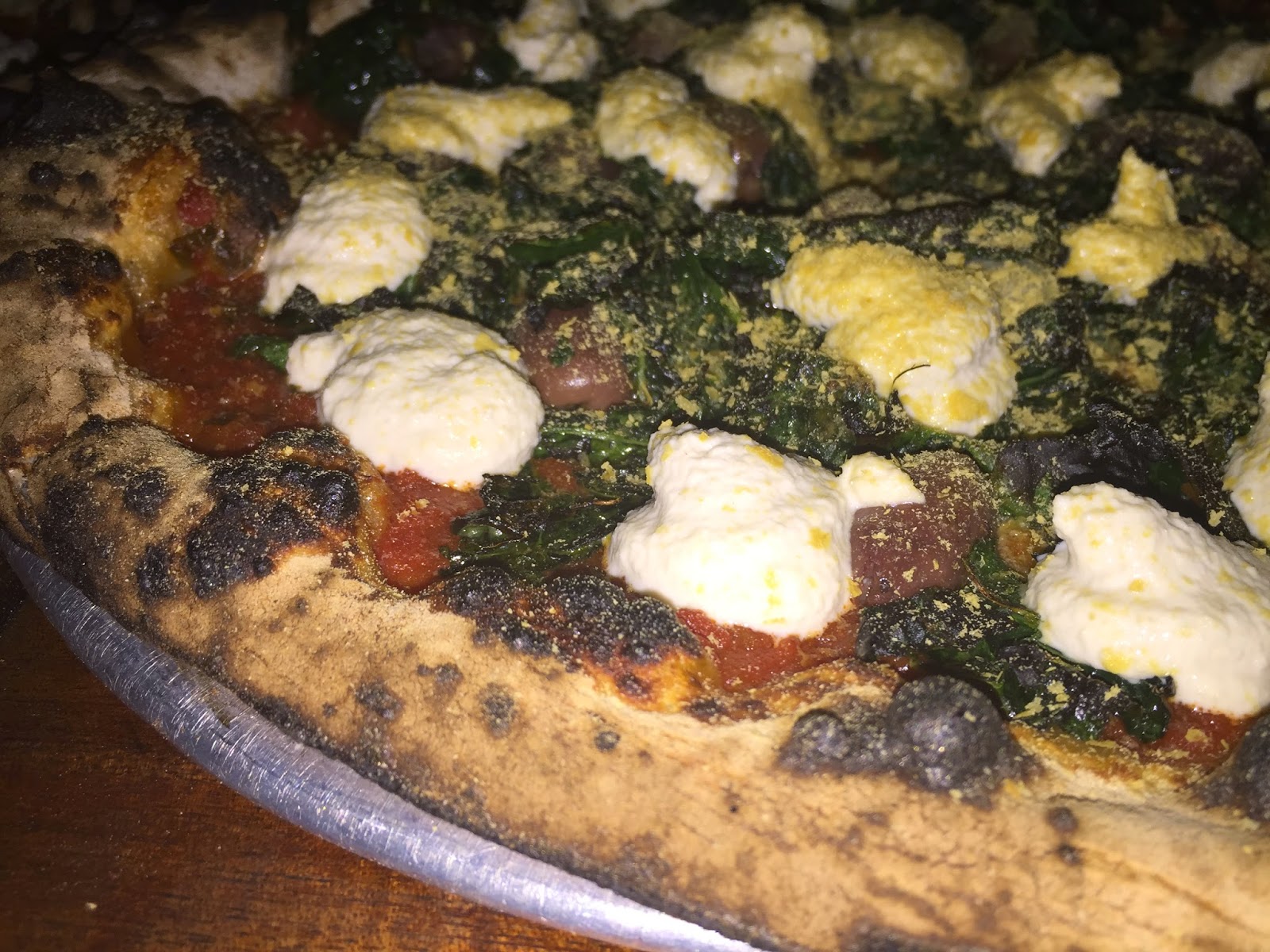 Brick oven pizza isn't usually my favorite style, but with Paulie Gee's thoughtful and inventive toppings and combinations this was a truly amazing meal. In particular, I cannot stress enough how spectacular the cashew ricotta is; you'll never miss the mozzarella. We all loved it and VM swooned over our leftovers.

Since we visited last month, they've changed the menu a bit and have added things like vegan meatballs made with green jackfruit, as well as almond milk & onion cream. While I appreciate the convenience of store-bought vegan items as much as the next person, there are way too many upscale, vegan restaurants in this city who rely on the same processed cheeses, meats, and condiments that you can easily enjoy at home (whether they call it by name or not). So it's reassuring that Paulie Gee's- an omnivorous restaurant of all places, would have the courtesy as well as the skill to knock our socks off with such house-made, artisan, vegan pizza toppings.

Paulie Gee likes to pal around with the patrons of his restaurant to make sure everyone is enjoying. When he got to our table, we thanked him profusely for the stellar vegan options and he was extraordinarily humble about it. We got to talking and he wound up whole-heartedly recommending a Chinese place in New Jersey as a must-visit for a shrimp (redacted) dish. Like hanging out with your favorite uncle, we had to remind him that we were vegan!

Sidenote:
Ironically, the three of us have had very serious conversations about restroom locks in the past. So, it was incredibly fitting that the lock in the Paulie Gee's (right side) restroom was so substantial and unique. 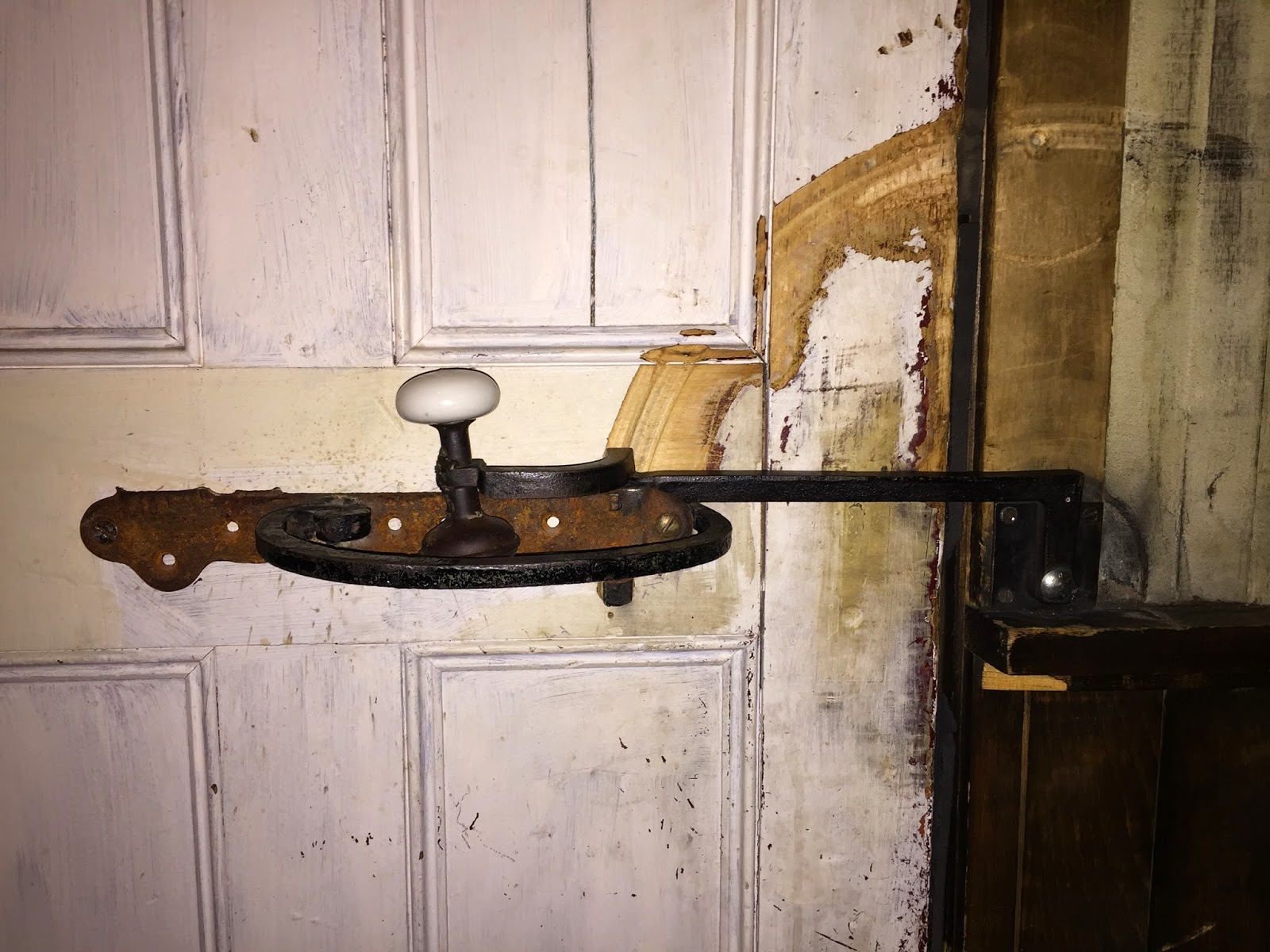 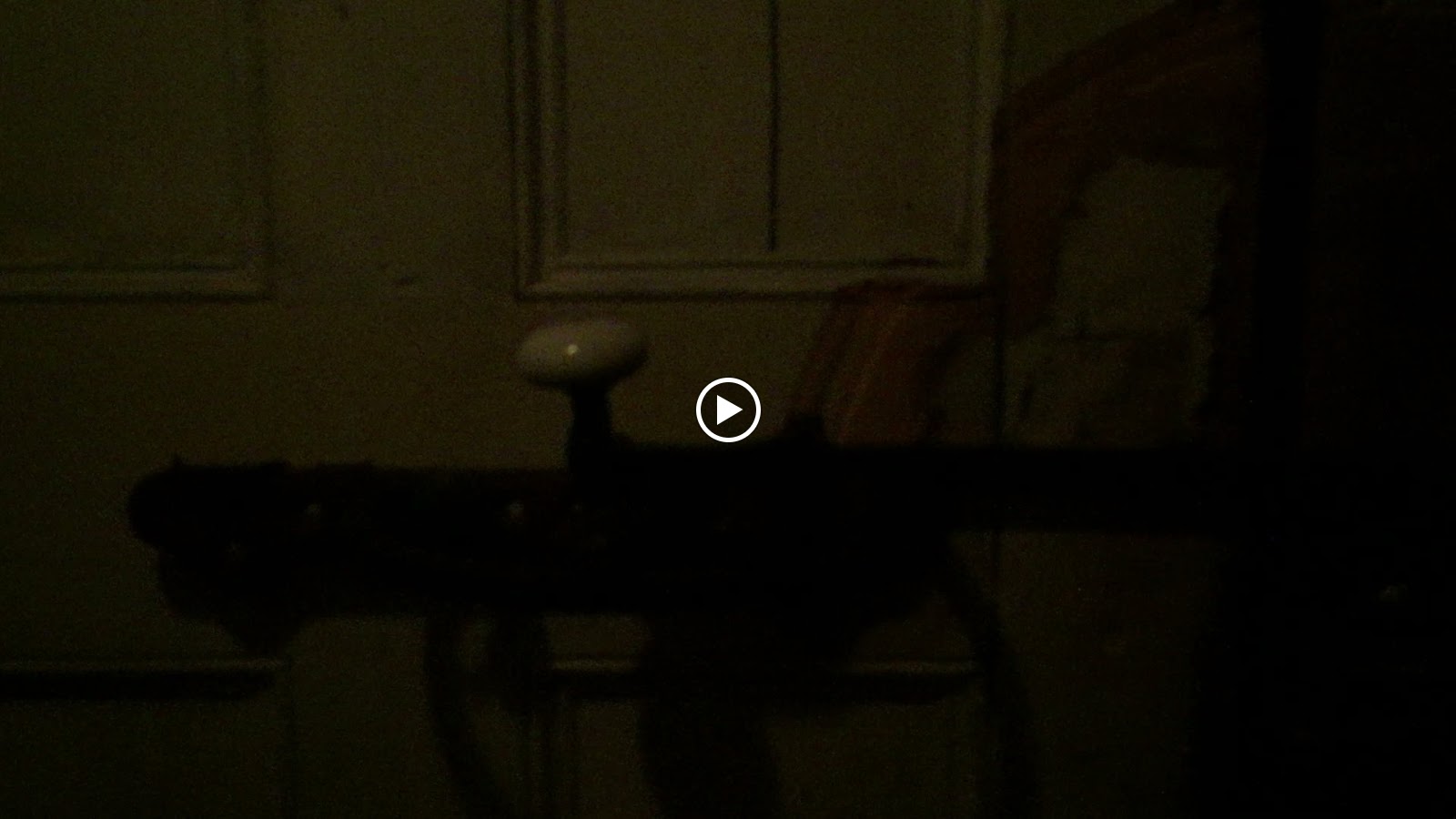 Paulie Gee's does offer a vegan dessert pizza, but it's not my speed (translation: not chocolate). Instead, we decided to try their ice cream, from Van Leeuwen, for the first time: chocolate and salted caramel. Don't let the unfortunately-flashed photo fool you; it was delicious: rich, creamy, and authentically flavored...a perfect fit for Paulie Gee's. Please note that we did not share the ice cream; this was my private bowl (I'm not a good dessert sharer). 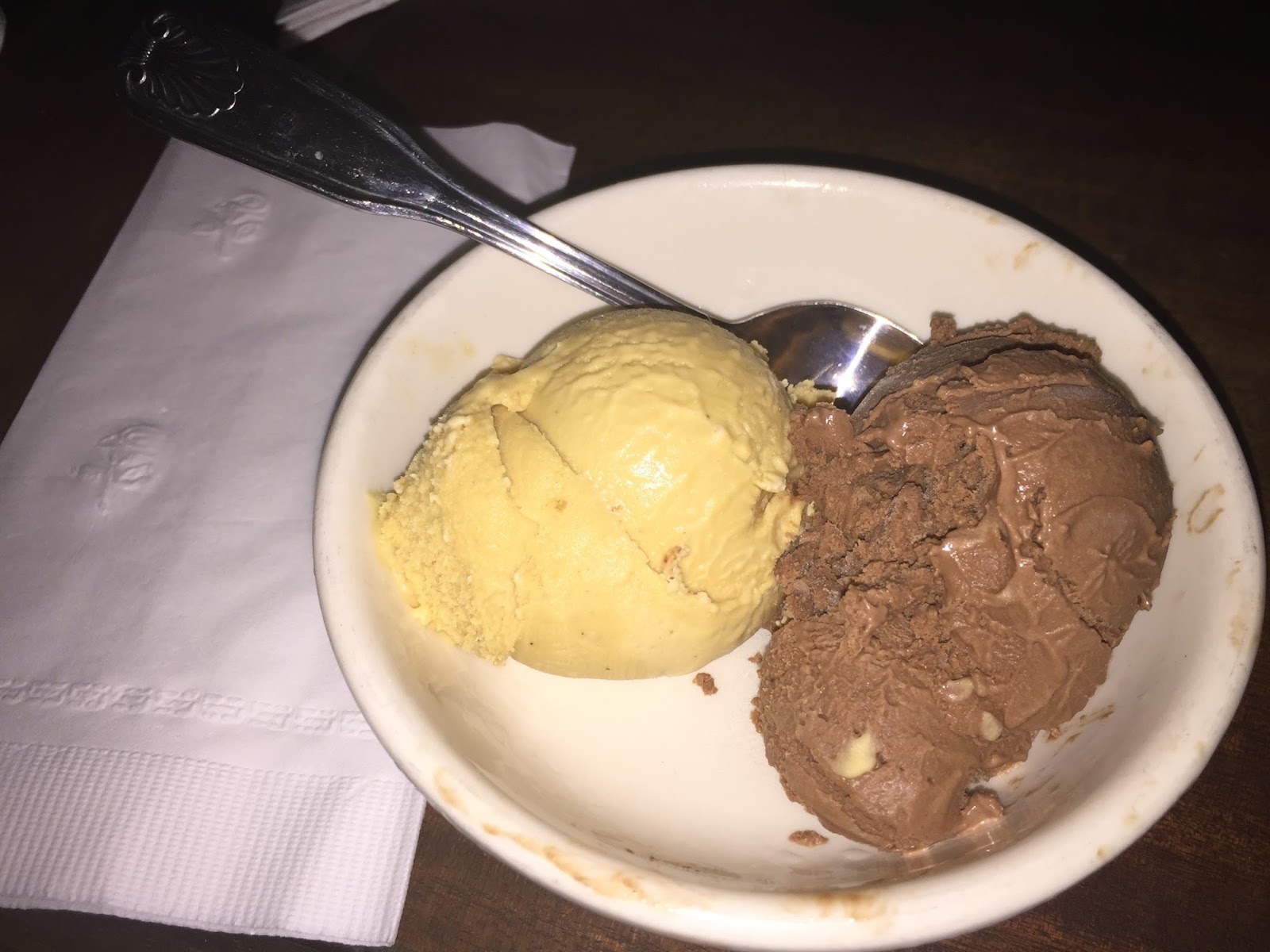 * The affable Paulie Gee didn't really make an exception, although he was a very good sport about our display for the duration of our meal.
Posted by Abby Bean at 9:03 AM