Another year, another Bethlehem Vegfest! If you've read this blog for any length of time, you know that this is a favorite- not only for its proximity to Vegan Treats, but because it's free, dog-friendly, and open to the public. The safe space of a vegan festival that caters predominantly to vegans is alluring, but charging admittance keeps out non-vegans- particularly when it's an exorbitant sum. If the point is to create new vegans (it is!), what better way than to woo them with a free invitation to our exemplary and celebratory festivities? But, I digress. 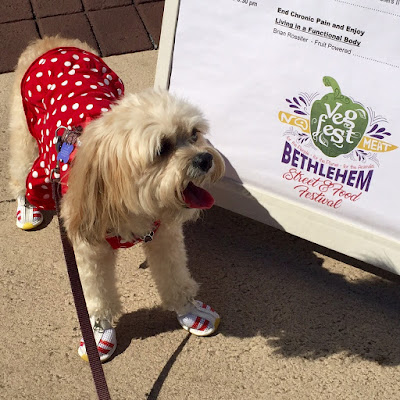 We always begin our BethVegFest adventure at Vegan Treats. Sure, they have a tremendous booth at the fest, but that's kind of for tourists; we like to go straight to the source.


Then it's off to the fest. They alternate between holding it in late August and early September; I think we can all agree that henceforth mid-September is the way to go because August is JUST TOO DAMN HOT. Thankfully, this year the organizers put tents over the tables/chairs in the food court area to offer a much appreciated reprieve from the relentless sunshine.


Per usual, we met some wonderful, open-minded, curious non-vegans at the fest- mostly over lunch. Because it's a neutral setting with a built-in topic of conversation, it's always a good chance to informally chat about the truths and myths of veganism.


Of course, the Bethlehem Vegfest wouldn't be what it is without me having an argument with someone (2 at BVF #5!). This time, it was with a clueless vendor inexplicably selling expensive pottery that was "beautiful because it's from Spain." First of all, I'll never understand why these types of vendors choose to vend at vegfests. The pottery is, most likely, accidentally vegan at best. So, what do these kinds of wares have to do with a vegfest? As far as non-food items go, people want messagewear, vegan clothing and accessories, cruelty-free beauty products- you know, things that aren't usually vegan by default. But that wasn't my beef.

While we were looking at the pottery she explained that the ridges in the center were a grating feature and proceeded to demonstrate with an ugly hunk of provolone animal cheese. Because VM has repeatedly implored me to work on my finesse, I diplomatically informed her that a block of cheese was an interesting choice at a vegan fest. She hesitated, then shrugged and said, "But not everyone is vegan."

BUT THIS IS A VEGAN FESTIVAL.

Her posturing became very defensive and I was unsure how I was going to proceed when a voice a few feet from me stated with equal neutrality, "Perhaps you should leave that out of your vegfest demonstrations." I looked up to see another disappointed vegan (as evidenced by her shirt) and breathed a sigh of relief and solidarity. The vendor then trivialized, "I didn't realize cheese was so upsetting!" We all walked away and heard her laughing, telling the next attendees passing her booth how "angry" vegans were mad at her just for having cheese. I did not hear their response. Why? Because I was storming over to the organizer table to defer to the professionals. It turns out, not surprisingly, that each vendor is provided with copious amount of information and guidelines for the fest, so there was absolutely no excuse for the presence of the cheese or, frankly, her attitude. They went over to speak with her and the next time we passed the cheese was missing from the table.

For the record, it's not so much that vegans can't bear to be in the presence of animal products. Let's face it, we all live in the real world where we're surrounded by non-vegans eating, wearing, and otherwise using animals in a manner we wouldn't consider. But to participate in a VegFest with such little respect for the cause is an absolute affront.


The vendors and organizations were a little sparse this year, but there seemed to be more food options than ever. Granted, this is always the busiest section of the fest, but without much else to do, it was hard to find a reason to stick around until you became hungry enough to eat again.


To be fair, the intense heat didn't help matters either.

The Cinnamon Snail crushed it again with the longest line; I admit I couldn't brave it in the oppressive heat. Vegan Shop-Up fave Freakin Vegans came in second. It seemed as though the other vendors catered to the overflow, of which there was plenty. As for desserts: Vegan Treats and MomsPops were the clear winners.


Rumor has it that there could be a revamp in the works for future BFVs and I find that prospect rather exciting; they've definitely had some ups and downs over the years. The huge turnout always confirms that there is significant interest in this event and that's the biggest piece of the puzzle. I'd gladly offer input if anyone is interested; this great event definitely has the potential to be amazing. 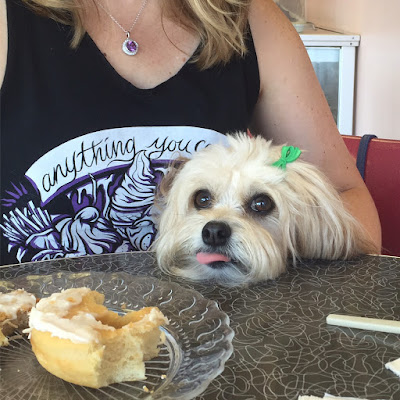