After a Dottie's Donuts breakfast, the lunch stop on our vegan Philly food tour was, of course, Blackbird Pizzeria. Before you judge, let me say the following: don't. 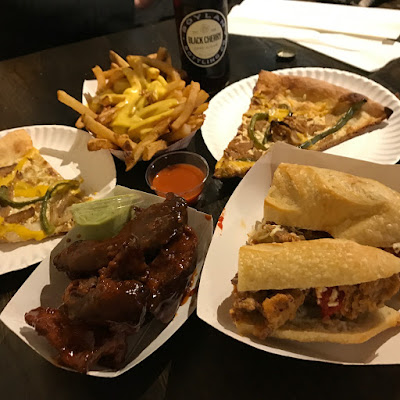 We got everything to share and the first thing we chose in agreement was their famous root beer BBQ wings! I'm probably the last vegan in the northeast to finally try these, but if there's another person out there: remedy your oversight immediately! These are really substantial wings and the crisp texture and luscious sauce are absolutely unmatched by any vegan wing I've previously consumed. I didn't find them spicy, but it does come with creamy cucumber dip in case you do. 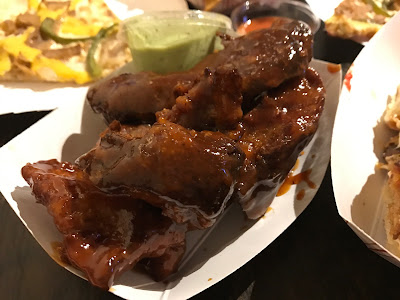 A "friend" recommended we get the seitan "chicken" parm sandwich: chicken fried seitan, marinara, Daiya cheese. This was the only womp womp of the meal and, naturally, we're no longer friends. To be fair, by "womp womp," I mean that it wasn't what I was expecting. You could probably chalk this up to liking what your used to; I grew up with these kinds of heroes consisting of thinly sliced and breaded chicken slathered in sauce and cheese on a substantial, soft hero roll. So, this combination of the hard baguette with large chunks of "chicken," and hardly any sauce or cheese was dry and hard to eat. I brought my half (minus a bite) home and gave it to OD; he liked it reheated (although not as much as the wings), so that's saying something. 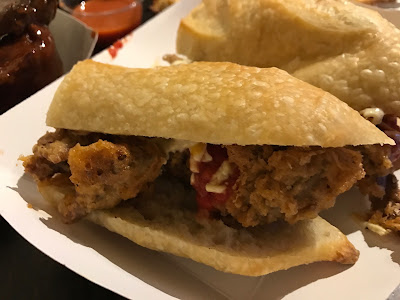 Because we're gluten-monsters we needed even more seitan, so we got their cheesesteak pizza: rosemary garlic seitan, garlic butter, Daiya cheese, grilled onions, green peppers, vegan whiz (!). This was a really good slice, but again- kinda dry. I dunno; is it just me? Am I not hydrating enough!?! Obviously, the seitan and the whiz were stars. 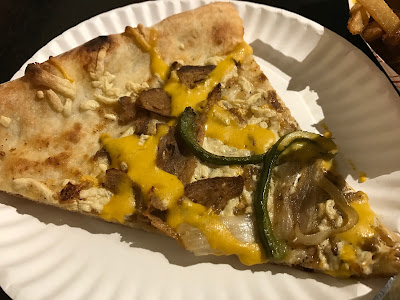 Did you hear me?

As someone who essentially survived vegetarianism via cheese fries, this was hella exciting. And, I'm happy to report, these were THE JAM! If you go to Blackbird, you must must must order these. Perfect cheese to fry ratio (puddle at the bottom) and extra credit if you share with someone who can't eat as much as you can. 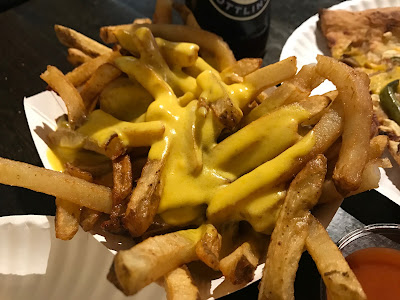 Stay tuned for our dinner stop...