I don't get to Philly much. In fact, I think I've only been there four times in my life. So, when my friend and I finally chose a day to visit, I was really excited. We planned a full day of eating and sight-seeing. Okay, mostly eating. First stop? Dottie's Donuts!

Dottie's was unassuming on a quiet, mostly residential street. Love the vintage feel of the sign. 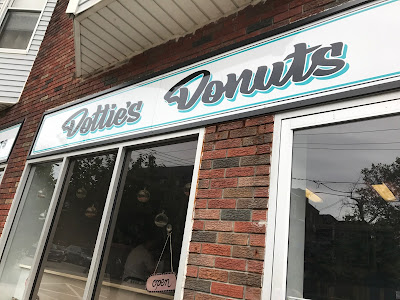 Inside it was all pink and donuts! There are few things I appreciate more than an efficient menu/sign. 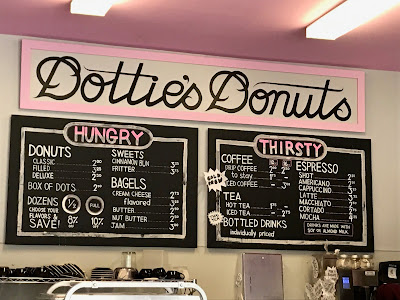 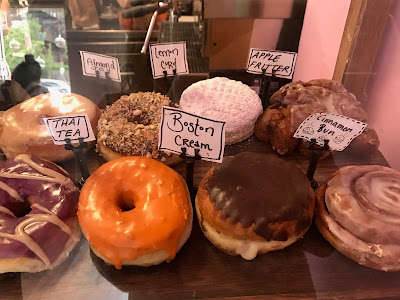 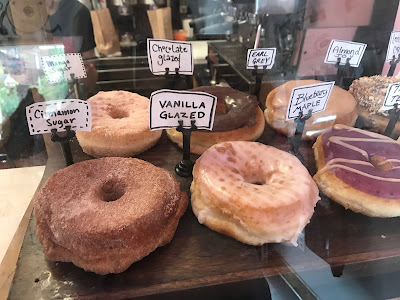 They also had two kinds of scones, two kinds of muffins, and bagels with assorted vegan cream cheeses. That was unexpected and pretty impressive, but we were definitely there specifically for the donuts- which are huge by the way. Naturally, I chose a Boston Cream; it's one of my faves. 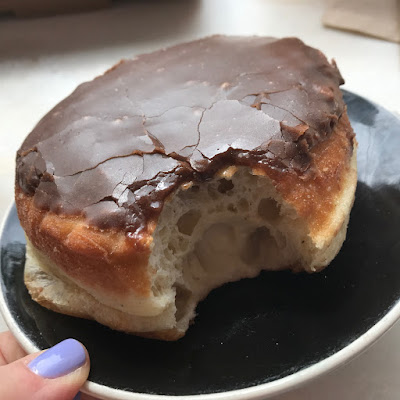 TBH, that was the donut I chose, but I also had a "box of dots:" a french fry box filled with vanilla glazed donut holes, and a Thai iced tea: the special drink that day (they seem to rotate). They have ample seating for a busy, little place. 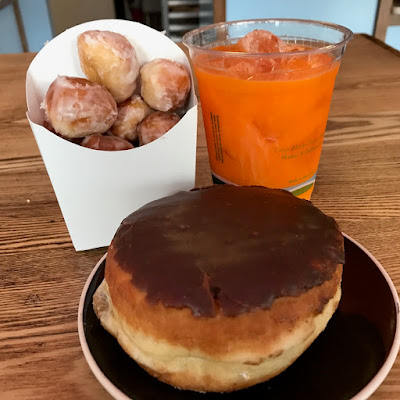 Let me just say a word 6 words about this box of dots. They are not to be missed!!! Fresh, chewy, bites of soft, vanilla goodness; possibly my favorite of everything I had. 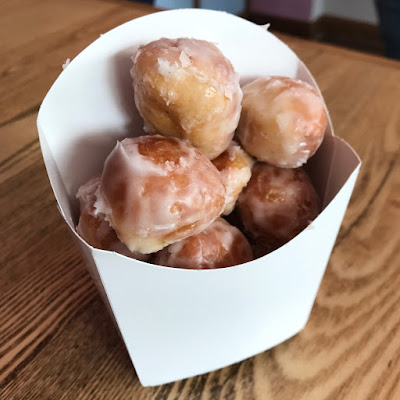 But you know that's not all I had. I also had another BOX of Dot's, which I took home to share with the fam. I tried them all- even the ones I normally wouldn't touch with a ten foot poll, just to report back to YOU so that when I meet you at a Vegfest or at VSU you know that I care. 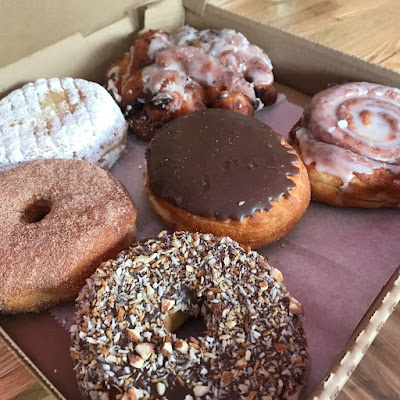 Disclaimer: I am a huge fan of cake donuts because, well, I'm a pretty big fan of cake. I mention this because, while I'm no expert, I'm pretty sure all of Dottie's donuts are raised donuts. I apologize to all the raised donut enthusiasts that I've assuredly offended with my previous statement about cake donuts which, I have come to understand, are regarded as blasphemous to many donut aficionados. That being said, these are my thoughts on the flavors I tried.

Almond Joy: The reason I normally don't like raised donuts is because I feel like they're all the same doughy base with assorted toppings. That may be, but Dottie's "doughy base" is pretty damn great and this chocolate/almond/coconut topping was terrific. VM concurs.

Cinnamon Sugar: I've been obsessed with The Cinnamon Snail's apple cider donut since opening day, 2010 and I was assuming this was going to be a jumbo version of the same. I was wrong. You know why? Because apparently apple cider donuts are cake donuts! I have so much left to learn. Because of the lack of icing, this one was a little dry for me. But, if you love cinnamon sugar (I do) and aren't expecting a cake donut, which is completely different (like me); I'm sure you'll like this a lot.

Lemon Curd- who invented the word "curd" anyway? I'm really not into it. I can sometimes be into lemon, but curd? Just bad PR in my opinion. I bought this for VM, who loves fruity things and guess what? She dubbed it "the most flavorful of the bunch." She convinced me to taste it, so I cut the world's tiniest sliver. I love a powdered sugar donut and the "curd" was actually quite pleasant, but boy was it TART! I can respect that people like that kind of thing, but it makes my lips pucker into duck lips, which I am most definitely not into (we see you, duck lips; just stop).

Apple Fritter- I wanted to love this. True, I hate apples. BUT, look how glazed and crispy it looks: so appealing. Unfortunately (or fortunately; depending on how you look at it), there were real apple slices inside; Dottie's seems to be showy that way. So, even if you were to painstakingly cut a slice of donut so that there was nary a visible apple bit within, you'd still sense the essence of apple. But, you know what? Without an actual apple bit, it doesn't really count. Yeah, I said it. I ate an apple donut (piece without any apples) and I liked it! VM said this was her fave.

Cinnamon Bun- I love the coil of a cinnamon bun and the icing is crucial. This one made use of a spicier cinnamon than I'm used to, but high marks otherwise. VM chose this as her 2nd favorite.

Boston Cream- Here's the thing: until an unfortunate incident in grade school wherein VM and OD unknowingly bought me a coveted (non-vegan) Boston Creme donut with spoiled custard, I was obsessed with them. It wasn't until years later when I discovered the Vegan Treat's version that I was able to reignite my love affair and it's been a smooth transition back into our longterm relationship; I think it's going to work out. That said, this donut was yummy in its own right, but it wasn't authentic for me. There's something about the dough and icing of a BC that is very specific and this was, in my opinion, a good donut that wasn't a BC. It was a delicious, chocolate-iced donut, but the custard was really where they lost me: it was runny and not sweet enough. OD never agrees with me on anything, but even he had to concur.

Let's talk one more time about those dots though, shall we? I think the lesson here is that the ratio of icing to dough in a raised donut is skewed too lightly for me and that's why I loved the dots so much. Maybe Dottie's will expand their dot offering? One can dream.

I would not hesitate to stop at Dottie's on all future Philly visits (hopefully more soon)- probably for a million boxes of dotses.

Word of caution: rumor has it that they sell out, so plan to get there early if you go!
Posted by Abby Bean at 2:00 PM