89 and I are big fans of The Bean, but a new explicitly dog-friendly coffee shop, Boris & Horton, recently opened in the East Village and 89 was invited to her bestie, OMJ's, barkday there! 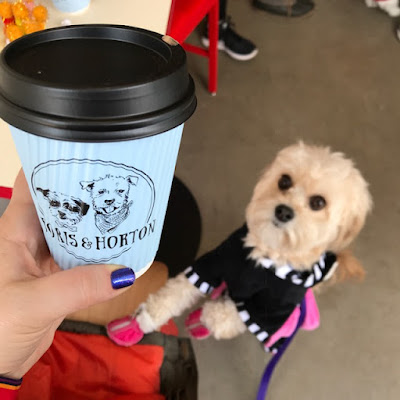 We prepared by wrapping OMJ's present all personalized like and choosing 89's partay outfit. 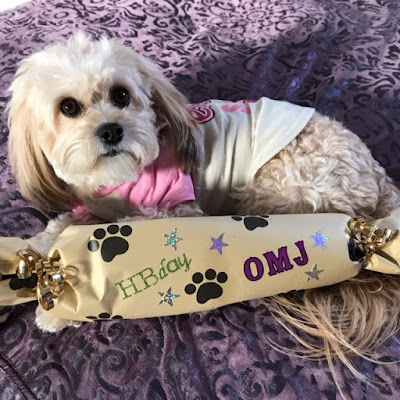 It was a quick walk over from Confectionery and we could spy the dog crowd from a distance. 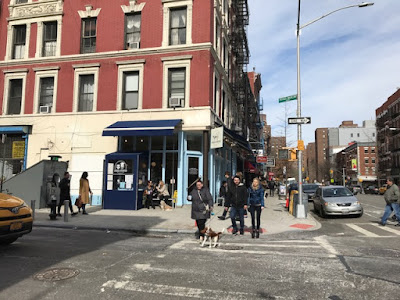 This little outdoor addition to the left of the photo below shows where you can order from "outside" if you have a dog in tow. The menu is posted only on the outside, however, which makes it difficult to order once you're inside, where there is no menu posted. I can't be expected to remember what I want for too long! 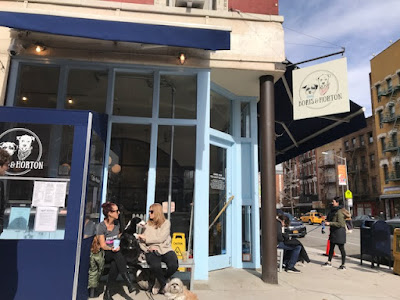 The cafe is split into two sides: one that is the actual cafe with seating (adjacent to the outdoor ordering nook) and is explicitly not dog-friendly: 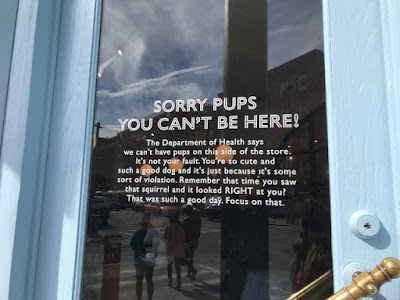 The other, more popular side has less seating, as well as a shop that sells clothes, toys, bags, and even canine baked goods (more on that later). 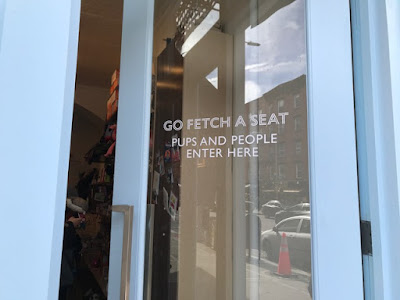 
This is the seating half of the dog-friendly half of the cafe; there are about 4-5 two-seater tables, which isn't nearly enough to accommodate people with dogs and people without dogs who want to be around other people's dogs. It seems as though the cafe portion of the establishment should have been made as small as possible- so as to occupy only 10% of the space, so that there could be enough space left for retail and the utmost amount of dog-friendly seating. I can't imagine that they're really trying to draw a non dog-friendly crowd, but the size of the dog-less half of the space would suggest otherwise. 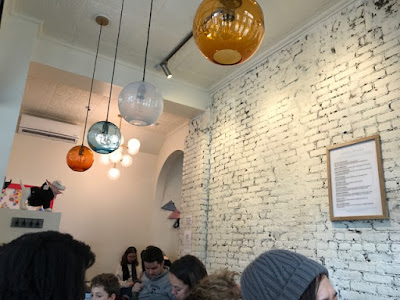 We were under the impression that we could place our order at the outdoor window and the order would be delivered to us in the dog-friendly half of the cafe. After some time passed and our order hadn't arrived, we went back to find it waiting for us at the window. It seems like delivery would be a more efficient gameplan, but this is just one of the many kinks they're going to need to work out. I had the Horton latte: with housemade cinnamon spiced mocha syrup and Oatly milk. It was my first time tasting oat milk, but I couldn't taste anything aside from the pungent spice of way too much cinnamon; it was really pretty terrible.

The menu is a little mysterious. It's all vegetarian, but proudly states that it's vegan and gluten-free friendly. However, most of the menu offerings involve toast and B&H uses Balthazar bread. GF peeps can substitute (presumably non-vegan) gluten-free bread, but the menu plainly states that the Balthazar bread contains honey. As far as I can tell from the menu, this limits the vegan menu offerings to beverages. I appreciate that they're so up front on the menu about the honey, but it's kind of an odd bread choice for an establishment catering to vegetarians, vegans, and the gluten-free crowd.

Also, we didn't find out until later, but there were non-menu items available in the non dog-friendly half of the cafe: baked goods and the like that weren't advertised or visible from the outdoor ordering window. The only reason we had any idea was that our dog-less friend came back with a banana bread! Again, if you're catering to a dog crowd, why are you making it so difficult for said crowd to order?


OMJ isn't a vegan dog like 89, but when her human bought her this decorated peanut butter carob donut (for dogs), I let 89 investigate. Later on, a nice woman seated next to us bought her friend's dog an apple cider donut (for dogs) and kindly got one for 89 & OMJ as well. For some reason, 89 was all over it- which was surprising because she rarely takes treats when we're out. Lucky for us, Maison de Pawz saw her inhaling it on Instagram and reached out to tell us that the apple cider was vegan! 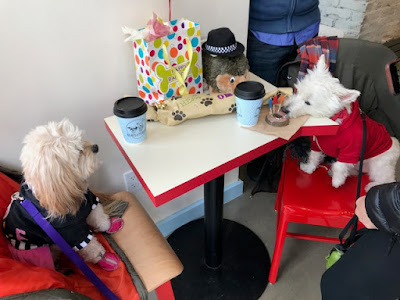 Here's 89 being demonstrably jealous of one of OMJ's gifts: a monster hedgie. 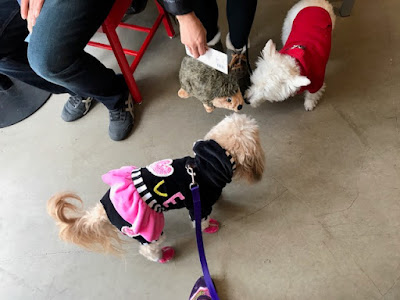 OMJ was very sociable with the many other dogs in the space, but 89 felt more comfortable hanging out mostly with OMJ and the humans she knew. In her defense, there were a lot of humans squealing in delight and talking babytalk to dogs, which she abhors. I'd really underestimated the amount of people that would wander in just to be in the company of dogs. Yet another example of why B&H needs to find a way to extend the dog-friendly seating area and make it easier to order on this side of the cafe. 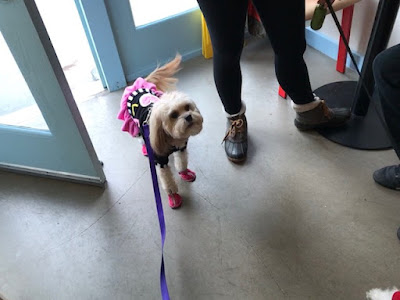 Incidentally, these are the house rules on the dog side. I'm curious what the rules are on the people side. #justsaying 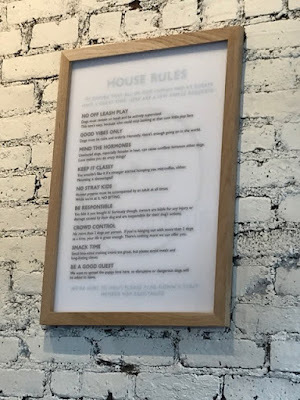 These were some really cute coasters; I was surprised no one had stolen them (we didn't!). 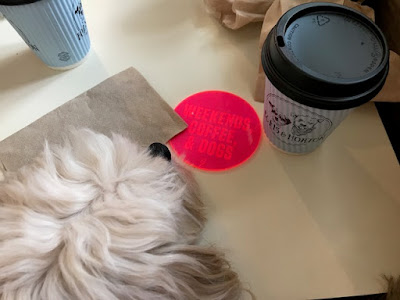 When we were there, all of the dogs were really well behaved- including 89! Unfortunately, with the set-up the way it is, there's nowhere to conveniently purchase more food and drink while you're there enjoying the dogmosphere. I hate to belabor the point, but couldn't they have put the bar of the cafe in the center of the two spaces and have had a window opening into the dog-friendly side instead of having the dog-friendly ordering window as far as possible from the dog-friendly side?


All in all, we had a great time because of the atmosphere, but the offerings and the access of the offerings could definitely use some reassessment. 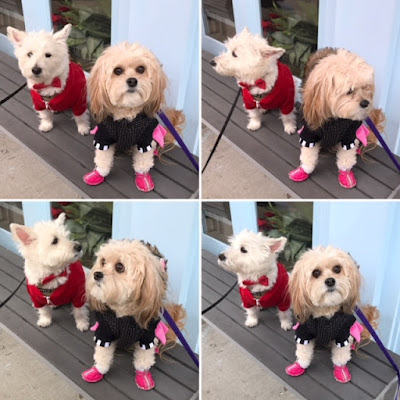 Maybe because it's new it's more of a scene than a pleasant spot to grab coffee with your dog in tow. 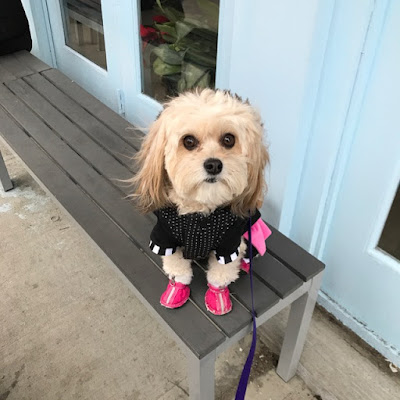 Ultimately a great concept with questionable execution. I really hope they make improvements because it's definitely a terrific idea and a draw for sure.
Posted by Abby Bean at 12:50 PM