A talented chef where I work had the opportunity to use Impossible Foods' Impossible Burgers* as an exploration of sustainable protein sources for the next generation, assuming they will have figured out that filtering grain through animals doesn't seem like the best plan. Knowing I'm vegan, he was anxious to hear what I thought of it, and offered myself and my colleagues a private taste test at a top secret location. 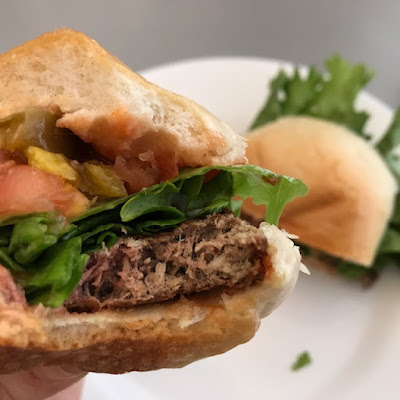 He explained that he'd received the product as "chopped meat" and had experimented with patties of different thicknesses. He'd decided that a relatively thin patty offered the most authentic tasting burger, so that's what he prepared for us. These were the partially thawed patties looking all bloody like I remember coming out of VM's freezer (insert barf-face here): 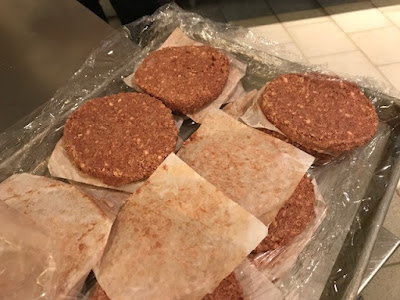 He told us that the "meat" was made up predominately of wheat, coconut oil, and potatoes. He knew all about the "heme" (leghemoglobin) and explained that the burger could be cooked well, medium or bloody rare- with the droplets of coconut oil mimicking the animal fat pockets in cow burgers. Grody. He cooked mine in a separate pan because I was the only vegan in the group and he's the best. 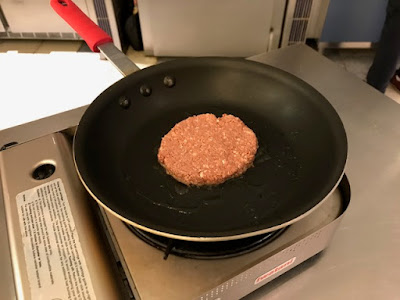 I thought I detected a meaty smell when it began cooking, but as it continued to cook I couldn't exactly place the scent. He recommended cooking my burger well, guessing correctly that I did not need my burger to "bleed." He cooked it in a little bit of oil, which gave a nice crisp to the surfaces of the patty. 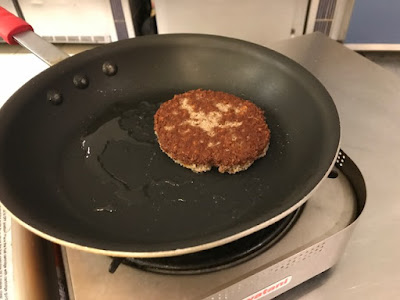 The others in the group ranged from ardent carnivores to everyday omnivores, and one relatively new vegetarian. I think it's a great sign that they were all up for the taste-test- with nary a naysayer in the bunch. 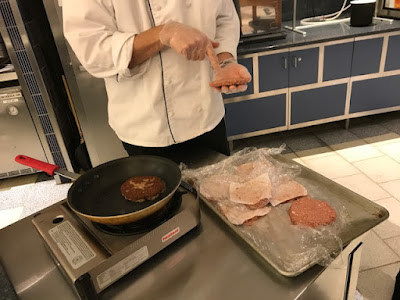 It's not often I get to partake in a fixin's bar, so I loaded my burger up with ketchup, lettuce, tomato, and sliced pickled jalapenos in lieu of standard pickles.


I've eaten a lot of bean and/or vegetable patties in my day- and more of the ubiquitous portabella mushroom "burgers" than I care to revisit, so I wouldn't necessarily categorize this as a veggie burger. It reminded me more of a fast-food type burger replica (sans gristle) than a hand-formed, chopped meat patty- except it wasn't nasty. I actually enjoyed it much more than I expect to, as did the omnis and vegetarian. The meat-lover ate a bite and a half and apologized that she couldn't "choke down" any more, but everyone else finished every bite. Nobody thought they could be tricked into thinking that this was a cow burger, which I think is a possibility with the Beyond Burger. 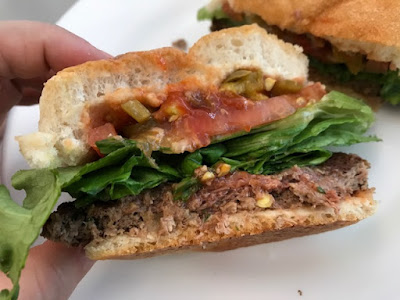 Our group had a great conversation about sustainability and spoke very little about ethics, but what they were most interested in was the nutrition. It turns out that the Impossible Burger packs about twice as much protein as a cow burger; this was probably why I found it to be so extraordinarily filling. I suppose that Impossible Foods made the Impossible burger so protein-dense in an effort to stave off the "where do you get your protein" crowd. They're definitely marketing it to non-vegans (fine by me), but could the protein content be overkill? Another interesting note is that my colleagues were very interested in the nutritional stats, but none of them had any offhand knowledge regarding the nutrition of a cow burger. One admitted that he won't purchase a store-bought knish because the nutritional information listed on the package scares him off, but that he doesn't hesitate to buy what is likely the same product, albeit unlabeled, from a deli without worrying about the contents because he can't see them. What you don't know and all that.

So grateful to have had the opportunity to try this burger, but I definitely wouldn't seek it out for a redo. Others seem to be in love with it, so if that makes vegans and/or keeps vegans happy, that's fine by me.

*UPDATE 3/15/18: after gentle reminders from friends and fans, I'm adding the issue of Impossible Foods' animal testing to this post, the original omission of which was an egregious oversight on my part. The CEO of Impossible Foods is vegetarian and conducted animal testing that was not required to create this burger. His response appears here; you can find many opinions with a quick Google search. As an ethical vegan, I am not a proponent of animal testing, but acquiesce that it is sometimes unavoidable- many of our systems are ill designed. That seems not to have been the case here, so the decision is a perplexing one, for sure.
Posted by Abby Bean at 5:59 AM