De Gustibus cooking school was established in 1980 as a place where you can "meet and learn" from world-class chefs in the heart of the city: on the 8th floor of Macy's Herald Square. The chefs and the menus prepared tend, not surprisingly, not to be vegan. But, every once in a while, owner and director Salvatore Rizzo welcomes a vegan chef so that the rest of of us can experience what all the fuss is about. This was the case this past week when Chef Adam Sobel of the Cinnamon Snail hosted a terrific chef demonstration and tasting. 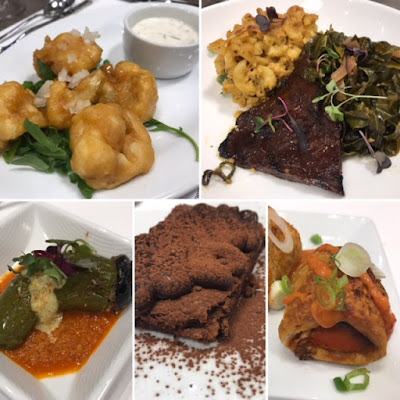 For the record, when I use the term "tasting" to refer to the menu prepared at this impeccable event, I do so in the loosest possible terms. It was a verifiable FEAST! Obviously we didn't know this going in, or we may have chosen to forego the pre-game salad, snacks, and dessert at Cinnamon Snail's Pennsy location. Still, no regrets.

VM and I arrived at Macy's a little early because, although it was a beautiful, sunshiny day, our weather app told us a storm was abrewin'. We did some shopping and managed to completely distract ourselves from any sky darkening and all manner of stormage that veritably shut down mass transit for an hour or so in the early evening. Ever the early birds, we rode what we assumed were the original wooden escalators for a while, blissfully unaware of the panic ensuing in Grand Central, before taking the elevator up a good while earlier than the time at which we'd been tasked with arriving. We stepped of the elevator and barely had time to scan the area for which direction to turn in when Sal locked eyes, welcomed us, and seamlessly ushered us in to a sleek and beautiful hallway from which you could see the cooking area. He checked our belongings (i.e. shopping bags), offered us still and sparkling water, and just generally joined us in bubbling over with enthusiasm as we awaited the start time with our friend. 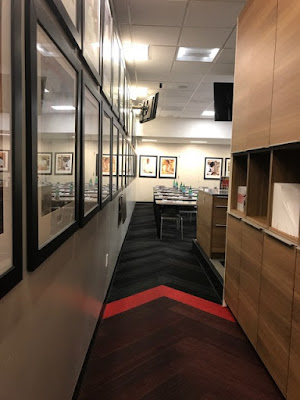 Because we're huge nerds, we sat in the center of the front row. 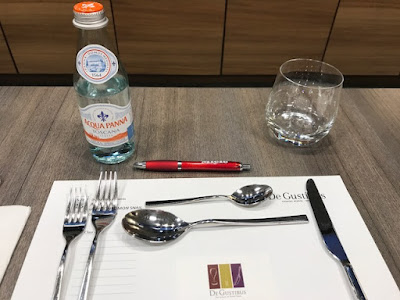 Our view? A sleek and stunning Miele kitchen. Fun fact; you can attend demos at the Miele "experience center" in NJ. 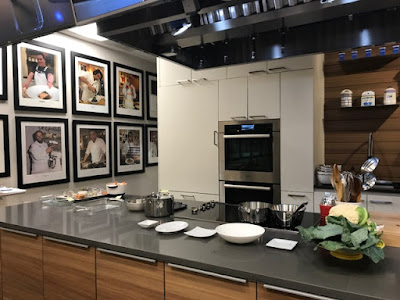 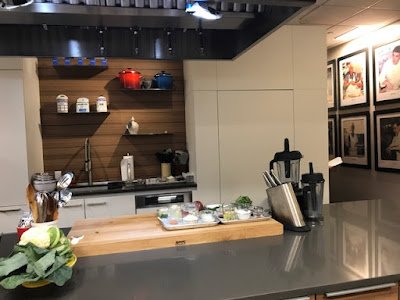 Here's Sal expertly explaining the organized and efficient manner in which everything would flow for an optimal experience; it worked like a charm. 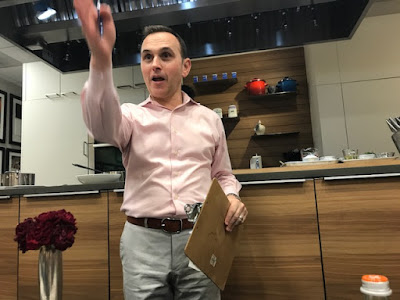 Chef Adam started us off with an amuse bouche, or what I like to call a "bonus" appetizer. These Cashew Cheese Jalapeno Poppers with Roasted Lemon Dijon Dressing could knock your socks off; wow, wow, wow, wow, wow. I knew immediately that we were embarking upon an incredible evening of Chef Adam's incomparable combinations of thoughtful flavors and textures and this was the literal kick-off. Most Americans are accustomed to a bland diet that can use some shaking up. One of my favorite things about Chef Adam's cooking is that he doesn't shy away from spice. I happen to love my food to have a kick and this was relatively mild from my perspective, but I heard a few "woahs" come from the crowd. People: that feeling is your taste buds awakening from a sad slumber; embrace it! The heat and flavor from Adam's spices are your friends.


Next up was this superbly generous portion of mind-blowing Maple Mustard Beer Battered Cauliflower Wings with Lemon Dill Tarter Sauce. I'm not lying when I tell you that I had no idea how to make tartar sauce before this; I think I thought it was just vegenaise and relish. So wrong! VM, who can't pack it away like I can, uncharacteristically ate all of her cauliflower (although I did commandeer her left over tartar sauce) and then spent the rest of the evening eyeing the demo plate, plotting how to acquire it without anyone seeing. FANtastic.


I should note that while we were eating and enjoying both the demo and banter, we were simultaneously treated to a ridiculously generous wine course from Vias Wine that was complimentary with every course. I, myself, am not a wine drinker, but VM and our friend had no problem making sure my wine did not go to waste. I will say that it was very easy to get so distracted with eating and drinking that you forgot that the chef was right up there creating amazing things before your eyes. De Gustibus is definitely a jovial atmosphere that lends itself to the utmost enjoyment and Adam's talent and overall openness to all manner of questions only added to the experience. 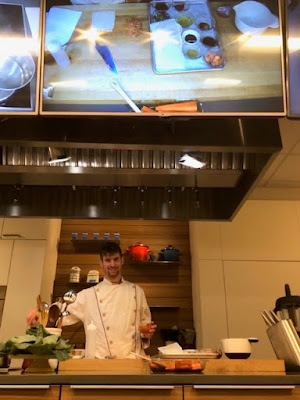 After that we were treated to Korean Smoked Carrot Pigs in a Blanket with Gochujang Ketchup. A word about gochujang. I LOVE IT! I've been eating the Cinnamon Snail's gochujang burger deluxe since it was introduced and I never tire of it. Chef Adam didn't invent gochujang (although he does make his own; there's a recipe in Street Vegan) but, much like loading up a sammie with arugula, it's just another thing I've learned to love and appreciate through his cooking. While creating this gourmet version of the finger food staple, Chef Adam broached many topics of interest to me, including: veganizing old school classics in homage, not imitation; avoiding making weird things simply for the sake of being weird; and, the cost of doing business in NY, whether you're a food service worker, consumer, or at the helm of a veritable vegan empire.


Full disclosure: I received a third pig in a blanket to gobble down because my friend felt like she had to offer something in trade for my wine. She didn't, but I didn't tell her that. Om nom nom nom. 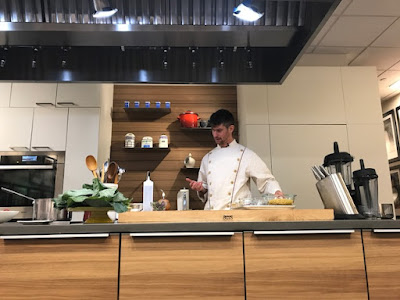 At the point when most people's stomachs were reaching full capacity, we were served the main course: Jerk Grilled Seitan with Jalapeno Mac N Cheese and Stewed Collard Greens. WOAH. So "woah," in fact, that VM ate and enjoyed her first piece of seitan, which she described as "perfect" (code for thin, tender, and crisp at the edges) and stated unequivocally that "everything should be covered in this sauce." The mac was completely different from the version served at The Pennsy (which I LOVE); this one cashew-based and equally decadent. Collards were tender and succulent AND I learned a superior method of cutting them too.


I had to help VM finish hers; she's still an amateur endurance eater. 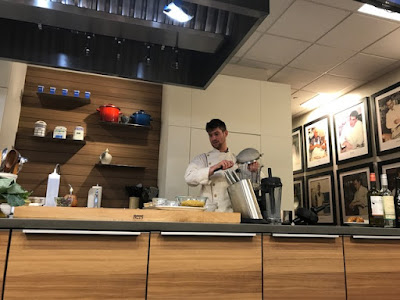 For dessert, there were Thai Tea Blondies with Earl Grey Chocolate Pudding. I think this was my favorite demo, most likely because...well, I was going to say a couple of things, but the reality is: chocolate. More specifically, chocolate pudding. Chocolate pudding is one of those things that my mom made for special occasions when I was a kid and it still holds a special place in my heart- especially when I'm not in charge of the endless stovetop stirring. The ceylon in the brownie and the earl grey in the pudding gave this favorite dessert of my childhood a new depth of flavor complexity. Not only did I eat my own and VM's, but I also scooped the pudding of my friend's and ate it in one fell swoop (with permission). Can't stop, won't stop!


At the end of the meal, it was wonderful that Sal brought out the entire team that worked to make the evening a success. 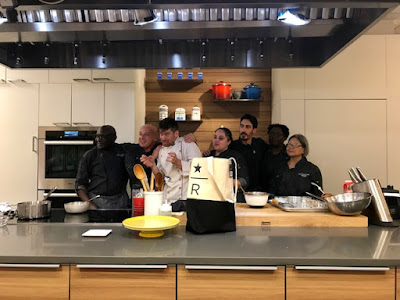 Chef Adam noted a special affinity for one of the staff in particular, Emeril; it's completely delightful to see people appreciate their colleagues this much. This is just one of the things that makes the utterly talented Adam a joy to be around. The candid reverence he exhibits when speaking of his family is heartwarming; we should all be so lucky to be so revered by our loved ones. 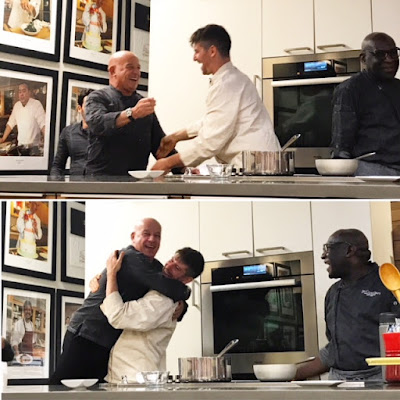 I highly recommend visiting De Gustibus for their next vegan chef demo. If it's Chef Adam again, all the better!
Posted by Abby Bean at 8:59 PM