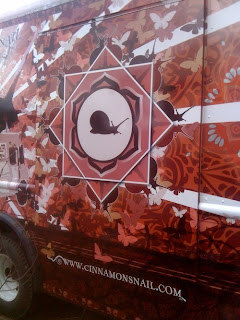 Move over Portland and Los Angeles, New York and New Jersey will soon have their very own mobile, vegan eatery: The Cinnamon Snail. Launching in Hoboken, New Jersey on Sunday, February 14 (with service to Brooklyn soon to follow), Chef Adam Sobel will be serving up breakfast, lunch, and plenty of snacks from 9:00am – 3:00pm. Everything will be vegan, unprocessed, and containing no artificial ingredients. The emphasis is on sourcing the finest, fresh, organic ingredients, and there will be options suitable for gluten-free, macrobiotic, and raw food diets, as well.

A longtime veteran of the food biz, Adam is no stranger to nourishing vegans: The Cinnamon Snail is merely his latest culinary adventure. I caught up with the vegan chef extraordinaire to find out a little bit about how he got to this point and what the future looks like; here’s what he had to say:

How long have you been and what prompted your decision to go vegan?
I have been vegan for 8 years, after being vegetarian for less than a year. My wife (vegan for 21 years) and I were expecting a child, and I knew I would want to raise the child vegan. I also knew that it was unlikely for our child to stay vegan if I weren't vegan as well. Going vegan has been a really important decision in my life that has encouraged me to perfect my ethics, and my ability to live with absolute non-violence.

When did you decide to devote your life's work to nourishing people through organic, vegan (and sometimes raw) food?
I was about 16, wandering around a National Rainbow Gathering. At these gatherings, people set up free kitchens to feed people. People offered vegan baked goods, baked in solar ovens. Some people offer sprouted grains, and the Hare Krishna crowd served up their delightful stuff. I was blown away by the idea of food as a gift. The way people took pleasure in serving and nourishing one another, seeking nothing in return. I was inspired to learn how to cook, so I could bring pleasure and strength to everyone in this world.

Are you formally trained, or is your talent inherent?
I always preferred to learn by direct experience. I was fortunate to start out getting a job in one of Chef Tom Valenti's restaurants. He was also self taught, and was a big inspiration to me. His whole staff was formally trained, and I learned bits and pieces from all of them. I went on to work in a handful of vegetarian and vegan restaurants, picking up people's tricks along the way.

What is your inspiration?
The force that inspires me most is TRANSFORMATION. In a world that serves up suffering, hunger, war and pain every day, I know there is a higher potential for our species. Human beings can evolve to a higher kind of existence. I know that our species has the potential of being such caring, kind beings. If we care, we can create a world of peace and beauty, free of violence and illusion. To collectively get to a state where we can understand ourselves and the role we have to play within the universe, introspective meditation is mandatory. And to have that self realization, a life of non-violence is the key. I am inspired to help all beings get to a state of peace and freedom. I can't think of a more important thing to do in this life, and I can't think of a more fun way to do it!

I first became familiar with your creations when you worked at Down To Earth, the all vegetarian restaurant in Red Bank, NJ that has since closed. Can you speak a little about that experience, other restaurant experience, and how it might have affected your decision to open a mobile truck instead of a stationary business?
Working at Down to Earth was a great experience! I learned quite a bit and was encouraged a lot by Chef Lacey Sher and Chef Gail Doherty. (Lacey just opened Encuentro, an awesome new vegetarian wine bar in CA, and Gail is planning an exciting vegan restaurant in Red Bank, NJ). I have been planning a vegan food truck for at least five years, and in that time, the concept has evolved a lot. Working at Down to Earth made me more conscious of making "real food". Their whole menu was nourishing, creative food with no nonsense. The whole fake meat and cheese thing is a little morbid to me, and I am not too convinced that TVP and soy cheese are actually digestible.

How would you describe Certified Orgasmic, your catering company? How long has it been in existence and how has it evolved?
I started Certified Orgasmic when Down to Earth closed its door suddenly, three years ago. It is NJ's only full service vegan catering company. We do everything from birthday cakes, to complete weddings, to craft service. For years we did a weekly menu of appetizers, entrees, soups, and desserts available for pick up. Now that we are starting the truck, folks who live in our area will be able to place orders with us by phone, email or text message, and when the truck returns to Monmouth County at the end of the day, they can come and pick up their food.

Where else can people find your goodies?
We’ve done a really nice table for the Red Bank Farmers’ Market for the past two years. We bring a huge display of vegan donuts, have cases of treats and sweets (cooked and raw), and we serve raw pizzas, nut milks, breakfast burritos and more. It seems like I am always saying, "Alright, this weekend, let's give ourselves a break and make less stuff". But, we always end up pulling out all the stops and making an epic amount of items. We just really love what we do, I guess. As soon as the farmers’ market was over this past summer, instead of taking the next weekend off, we were up early in the morning, testing new apple fritter and donut recipes. We bring the donuts to "Kaya's Kitchen" (a sweet vegetarian restaurant in Belmar, NJ) for them to serve at brunch during the summer. Year-round, we deliver cakes and raw desserts almost every week to Kaya's and to The Eurasian Eatery in Red Bank.

What gave you the idea for The Cinnamon Snail, and what will be your measure of its success?
The Cinnamon Snail has been my dream for years, and I am not sure anymore what sparked the concept. I used to be a little punk graffiti artist when I was a kid. I always liked the idea of forcing creativity and beauty back into the community, onto the street, where everyone comes in contact with it. I guess my measure of success will be seeing just how much the truck positively affects people. Since I started preparing vegan food professionally, there have been few things that tickle me as much as hearing how something vegan and yummy helped someone change their life in a significant way. To see people take hold of their lives, to refuse the default violence of our civilization, to start living in harmony with nature. If my food helps people in any way with that transformation, I am delighted!

Can you give us some examples of the types of menu items that will be available?
The menu is going to be seasonal, and expect it to evolve at our whim! Here are a couple of offerings to chew on:

When? Where?
We will be opening ON VALENTINES DAY, 9:00am – 3:00pm, with some special treats and sweets, and we will be offering free vegan donuts all day (or until we run out). We will be starting service in Hoboken NJ (don't worry NYC, it's just a couple stops out on the PATH train), exact location to be announced later this week. We are working full tilt at getting our truck running in Brooklyn. I can't say how long that will take, but get in touch with us if you have any suggestions or resources to share about it.

Until then you’ll find us in Hoboken on weekdays from 9:00 – 3:00. From 9:00 - 11:00 we will be serving a fully awesome vegan breakfast / brunch EVERY DAY! This will include things like breakfast burritos, raw as well as fresh baked granolas with live nut milks, smoothies, donuts, breakfast platters of pancakes, scrambled tofu and roasted yams, and a lot of other good things.

Then 11:00 - 3:00 we will be serving an absolutely ridiculous lunch. Most items are totally dinner worthy too, such as Apple cider glazed tempeh with matchstick fried parsnips over marinated kale and, rosemary root vegetable puree. There will be raw, cooked, and macrobiotic options available every operating day.

Is there anything else you'd like to share with our readers, who are already undoubtedly drooling over the prospect of a mobile, vegan, organic truck coming their way soon via The Cinnamon Snail?
KEEP HAVING FUN, no matter what this world tries to get you doing instead. Please hug people more, and work hard at making more great things happen in your community! We look forward to meeting you, and serving you nourishing food really soon!

Thank you so much, Adam, for taking the time to chat.  And for all of the incredible chocolate ganache cakes you've made for me over the years!

** 2/13 update per Chef Adam: The Cinnamon Snail 2/14/10 LOCATION: We will be parking on Sinatra Drive in Hoboken. There is no way for us to have an exact location posted until we are parked, but we will be trying to get a spot as close to the train station as possible on Sinatra. We will send out our exact location tomorrow morning as soon as we are parked by twitter and ...on facebook. If all else fails, call us at (201) 675 3755. See you tomorrow!
Posted by Abby Bean at 11:02 AM