FINALLY made it to traditional NYC mainstay Pizza Suprema this past weekend and the vegan offerings were more impressive than I even could have hoped. 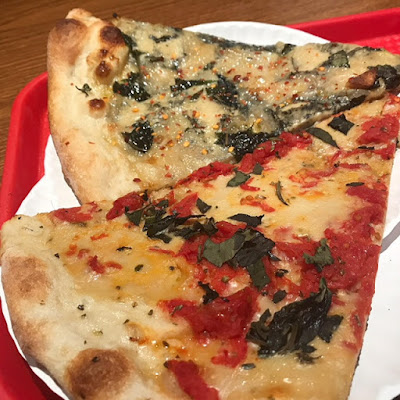 The first option I spied was just above my eye level (thus the crappy photo): a relatively ubiquitous cheeseless, veggie pizza option. I wasn't interested, but extra points for it being a Sicilian pie AND for noting it's vegan-friendliness right on the sign. From the online menu: 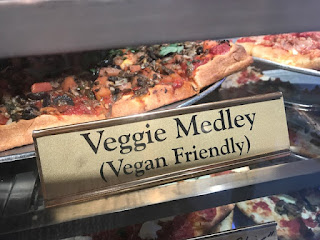 THEN I spied what we'd came for: the vegan margherita pie, sold by the slice*. What makes this option particularly special is that they didn't decide to offer vegan pizza, buy some Daiya, and call it a day. They make their own vegan cheese. OUT OF SUNFLOWER SEEDS FFS. And it's pretty damn great. [UPDATE 12/6/18 It is not actually Pizza Suprema housemade cheese; it's Che cheese. Thanks, McMarshall, for the correction/information!]

My one complaint (I know, I know) is that I think I prefer traditional marinara to this fresh tomato sauce, but still- it's really, really, really good. Anyone else would think it was mind-blowingly amazing, so I get it; no need to @ me. 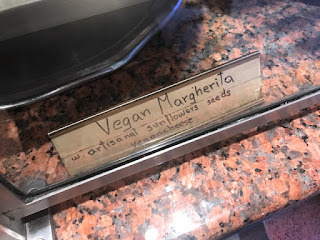 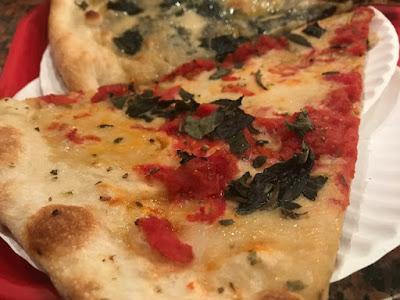 When we'd arrived, there'd only been one margherita slice available. I selflessly offered to relinquish that to my companion- mostly because I had my eye on the unexpected second slice of vegan cheese pizza available: the "new vegan slice*" made with white truffle & ash brie (!!!) with sauteed onions. Selfless, I say.

This slice was outstanding. If I were to visit again tomorrow and these were the only options, I would go for this slice without hesitation; it was decadent. For starters, I had to blot it with a paper napkin before eating; I haven't had to do that in almost 2 decades. Yay for oil! It was rich and creamy with a significant depth of flavor; I really can't say enough good things about it. 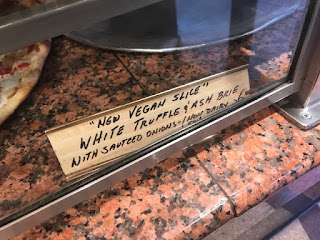 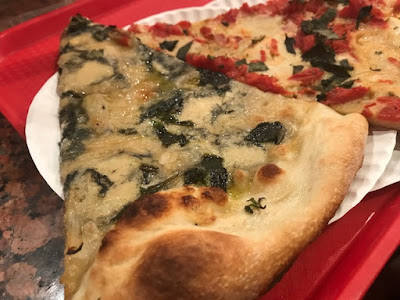 To be fair, BOTH slices were, at their core, exactly what we needed: traditional, foldable, NY pizza by the slice. No doubt I LOVE our all-vegan pizza options, but to have these outstanding options available from a traditional joint in view of MSG is priceless.

* Tips for planning your visit:
Aside from the Veggie Medley, as of this writing, the vegan options are not listed on Pizza Suprema's online menu. I *think* it's because they're not necessarily permanent menu items? Also, it's important for me to note that sometimes when the vegan slices run out, there aren't anymore (thanks to my accomplice for suffering through this experience on a previous visit so that I could bring this information to you).
Posted by Abby Bean at 7:11 AM