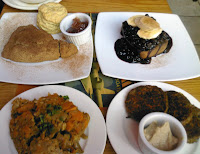 After catching a glimpse of The Discerning Brute's Sacred Chow banana bread french toast we couldn't wait to get our brunch on with the same thing.

With so many suggestions on Yelp and Supervegan and such a varied brunch menu (in addition to their entire regular menu and daily specials), it was hard to decide what to order.

This is what we went with:

Soy Buttermilk Buscuit with [super] strawberry rice syrup jam: No one would ever guess this biscuit was vegan and it was just as fresh a day later.   You can't help but notice the vast difference between their homemade jam and the crap you can normally get at the store.

Cinnamon Scone: Sounded plain, but was nice and cinnamonny.  It was impressively crunchy on the outside without being dry on the inside.  Also just as fresh the next day.

Banana Bread French Toast: Different from any french toast either of us had ever had, this was a thick slice of banana pound cake (grilled so that the edges were crispy) and then smothered with whole blueberry-filled blueberry sauce and topped with perfectly ripe bananas and dusted with cinnamon.  More delicious than you can imagine.

Root Vegetable Latkes: These were crispier and less mealy than traditional potato latkes and they were served with a unique, tangy "Indonesian Date Butter" rather than a traditional fruit compote.  I can't think of a meal these wouldn't complement.

Tempeh Sweet Potato Hash: Chunks of sweet potatoes, crumbled tempeh, and the perfect amount of sauteed onions made these a big hit- even for my supposedly tempeh-neutral dining companion.  The dish was hearty and the "side" order ginormous.

Sinner Bar (not pictured): A thick shell of dark chocolate filled with caramel and coconut.  If you can't fit it in your tummy, get one to go!

Every single thing we ordered was at the peak of freshness, presented beautifully, and tasted marvelous.  Additionally, the prices were low and the portions were large.  While it will be hard for our tastebuds to pass up repeating any of these scrumptious dishes, I'm anxious to return for lunch or dinner so that we can be equally impressed by their later day meal offerings.

The atmosphere at Sacred Chow is funky and our waiter was kind and efficient.  As everything is prepared with such care, don't visit when you are in a rush; this isn't that kind of place.  Overall, a quintessential New York dining experience.
Posted by Abby Bean at 12:25 PM