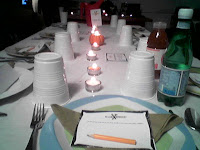 A belated posting for my attendance at the incredible Veggie Conquest II. This event could not be improved upon unless the secret ingredient was a chocolate/peanut butter combo.

But seriously, I thought it was just going to be a nice evening with some yummy tastes. Instead, it was an event- literally and gastronomically.

The location in Chelsea was convenient and the space was decorated elegantly and appropriately for the seasonal secret ingredient (fall/squash). The hostess at the door was welcoming and friendly-- even when I almost stole two pins (they should put a sign there for those of us used to the adorable freebies at Vegan Treats)! There were plenty of friendly peeps to mingle with, including representatives from nearby NY state animal havens: Farm Sanctuary in Watkins Glen and the Catskill Animal Sanctuary in Saugerties.

When things got underway, the inimitable Joshua Katcher (aka The Discerning Brute) took control of the evening: effortlessly entertaining and simultaneously moving the event along seamlessly. Three judges: the well-spoken and equally kind and candid Michael Parrish DuDell from Ecorazzi, creator of Indiana's The Bake Easy: Amy Lynn Herman, and an extremely quiet Deborah Gavito, owner of Counter. I had wanted to take my frittata florentine issue up with her, but she didn't seem to be in the mood to mingle with the crowd, let alone hear me lament the removal of the incredibly praiseworthy dish from her brunch menu. So, unfortunately, it is not looking good for my frittata.

In any event, everyone was presented with tastes of the entries and then had the opportunity to vote. There were 1st, 2nd, and 3rd chef prizes presented (one donated by the wonderful Lula's), and even door prizes were bestowed upon a couple of lucky tasters who got to choose between vegan mac & cheese or white chocolate chips from Cosmo's.

NEXT, the tasters were treated to a ginormous smorgasbord prepared and presented by the very talented volunteers of the evening. And, as if those delicious and varied creations weren't enough to satiate, the generous Sara- of the infamous Sweet & Sara marshmallow line- donated platters upon platters of all of her scrumptious creations (toasted coconut marshmallow and rocky road bark are still my household's favorites!). Apparently the modest Sara was even in attendance, but since she didn't introduce herself she wasn't able to receive the praise she so rightly deserves to have bestowed upon her. I'll take the opportunity here to give her a resounding handclap; if the vegan corn dog deserves one (and it does), so too does the vegan marshmallow.

Eventually, the evening wound down with most everyone chatting happily about just about everything vegan. A hardy thank you to everyone responsible for the terrific evening: from founder Jessica Mahady to all of the selfless volunteers. Not a single detail was overlooked; the care is obvious and appreciated. From the ambiance (lighting, music, room prep) to the entertainment, to the generosity of the goodies: this is an evening not to be missed.
Posted by Abby Bean at 5:00 PM