I never ate sushi as a non-vegan, so my sushi experience is relegated mostly to corny cucumber/carrot/avocado rolls, or some variation thereof.  Sure, some swanky sushi bars might offer a special veg roll, but there's always the possibility of cross contamination, the inadvertant sprinkle of bonito, or lifting up your avocado dragon wrap and finding heinous orange roe lurking beneath (it's happened).

Enter the beauty of Soy & Sake.  As a big fan of Red Bamboo and the now defunct Red Bamboo Brooklyn, I really didn't doubt that Soy & Sake, with the same owner, would deliver.  Instead, it blew me away.

The menu is huge.  There are plenty of options that can be found at Red Bamboo, a lengthy sushi menu, and a zillion other offerings ranging from Chinese and Japanese, to Thai, Indian, American, etc.  It's hard to decide where to start, so we agreed to a few ground rules:

We each chose a drink from the bar menu and neither of us were disappointed.  My companion went with the Bahama Mama and I chose one of my favorites, the Lychee martini.  Both were perfect: not too sweet, and neither too weak or strong. 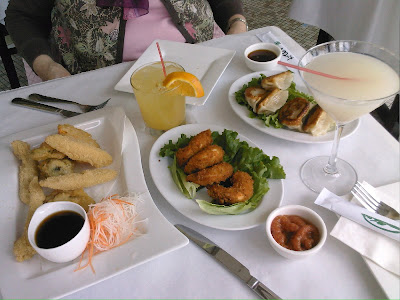 The appetizers in and of themselves were a feast.  The chicken tempura came with a generous amount of chicken and a nice assortment of veggies.  Even my analog-hating vegetarian companion enjoyed the chicken along with her vegetables; it was that good.  The tempura batter was non-greasy and pretty authentic.  Ok, I cheated and ordered the Red Bamboo fried shrimp, but I hadn't had them in a while so I was glad to confirm that they were just as delicious as ever with either cocktail or tartar sauce.  Again, the analog-hater herself enjoyed all of the crispy ends!  Finally, the fried vegetable gyoza was a more than respectable entry into the city's gyoza wars (I made them up; it just seems that my companion is forever ordering dumplings!).

Onto the sushi!  The first roll we tried was the simple, yet unique, peanut avocado roll.  I love both, so it sounded win-win, but we were also aware that the combo could go terribly, horribly wrong.  It so did not; it was exquisite!  This is so easy, yet so delicious; why haven't I ever seen this anywhere before? 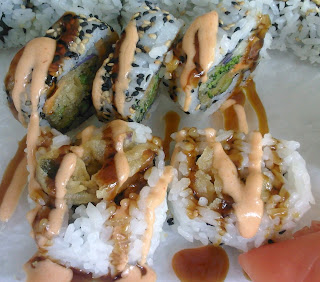 Next up was the mixed vegetable tempura roll.  Absolutely stuffed with hunks of sweet potato, broccoli, and asparagus tempura: the pieces of this roll were huge and incredible.  Nothing like the dinky, non-vegan, veggie tempura rolls I've seen served elsewhere; this was packed with high quality ingredients instead of just eggy batter and some veggie crumbs.  The decorative condiments only added to the literal explosion of tastes; I think it was possibly the dumpling dipping sauce and sriracha mayo: delish. 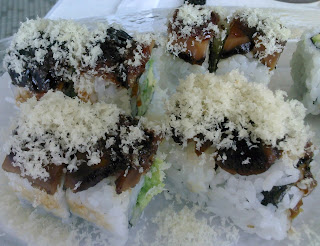 The veggie lover's roll sounds ubiquitous, but it was astounding.  The special roll was filled with cucumber, avocado and asparagus, then topped with scrumptiously marinated mushrooms and some kind of crunchy flakes that resembled parmesan but tasted more like flavorful rice noodle shreds.

Soy and Sake does offer all kinds of tuna, salmon, scallop, crab, eel, etc. rolls, but we decided to stick with the veggie options on this, our inaugural visit.  We could not have been more impressed with every choice.  Each veggie role was a unique combination enhanced by perfect accoutrements. 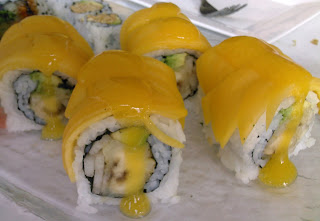 Finally, for dessert we shared the Hawaii roll.  We actually ordered it as part of our meal but immediately realized it would be better enjoyed as a finale and saved it till last.  The roll was filled with the surprisingly delicious combination of seemingly oddly paired, but similarly textured banana and avocado, and set off by crunchy Korean pear.  Topped with mango slices and mango sauce, this roll was an unexpected delight and I would definitely recommend it as dessert (even though their dessert options include Vegan Treats and fried ice cream (!) made with Kleins).

In conclusion, the food was entirely fresh and exquisite; the service was friendly, unobtrusive, and well-timed; the prices more than fair; and the restaurant beautiful (a far cry from the short-lived Dragonfly): light and welcoming.  The fish tank is certainly an attractive centerpiece, but I'm at odds with a respectful vegetarian/vegan establishment choosing to use an aquarium as a decorative element.  Here you are enjoying a cruelty-free meal whilst living beings spend their lives relegated to a relatively miniscule, man-made habitat solely for aesthetic purposes. 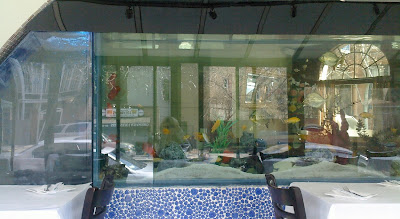 That aside, you will not be disappointed with anything you order at Soy & Sake.  In fact, you will find it difficult to concentrate on your own tasty selections as equally delicious options go by your table, intended for other diners.  Consider this display the coming attractions for what you might order on your next visit, which will surely be soon.
Posted by Abby Bean at 12:33 PM

Email ThisBlogThis!Share to TwitterShare to FacebookShare to Pinterest
Labels: Soy and Sake, sushi