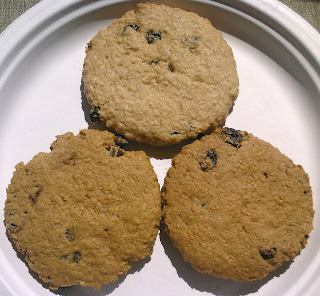 I was recently gifted major Little Lad's booty by my Dad, who thankfully goes to the dentist a block away (score!).  He picked up some popcorn, which I'll get to in a later post, and a couple of flavors of their toaster oven cookies.  Having previously tried the delicious blueberry flavor, I was anxious to try more.

I'm not usually a fan of oatmeal (it's breakfast, not dessert!), but the Oatmeal Raisin was very nice and not too oatmeal-y.  Plus, it was filled with plump raisins that only improved with toasting, as raisins will do.

The Pumpkin Raisin was very similar in that there wasn't an overwhelming taste of pumpkin, but plenty of raisins.

Finally, the oddly named Pumpkin Variety was the crowd favorite, as it contained not only raisins, but walnuts and carob chips. 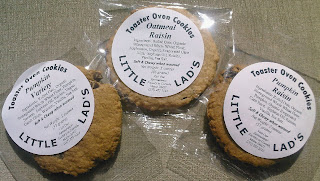 Don't pick up any of these cookies expecting to stuff them in your face and be blown away by their sweetness; that's not what they're about.  Instead, do yourself a favor and warm them in the toaster as suggested; you'll be glad you did.  Enjoy it not as a cookie, but more as a freshly baked muffin top!  While remaining soft on the inside, the edges will get nice and crispy and you will be able to savor the healthy cookie alternative and wonder why there aren't more places like Little Lad's.
Posted by Abby Bean at 11:41 AM