I usually scan Serious Eats NY for anything appealing or vegan, preferably both.  Since SENY is extremely meat and dairy intensive, this is a rarity. 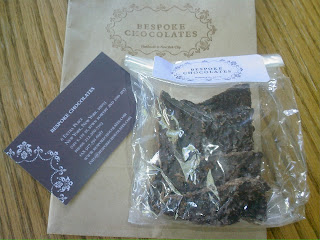 Yet one day the phrase "pretzel bark" caught my eye.  While there was no mention of ingredients, I was counting on the fact that dark chocolate + pretzels could very easily = vegan goodness.  So, I immediately inquired into the company, Bespoke Chocolates, as to whether or not this particularly appetizing concoction was vegan.  The answer was an immediate and friendly YES.  Okay, maybe I added the caps (but still).

I finally made it over to Bespoke the other day.  It is tucked away on the previously unknown (to me) Extra Place off of 1st St between Bowery & 2nd Ave: a sort of disconnected, dead-end alcove that was possibly the most unusually desolate street I have known in NYC; I think I even saw a tumbleweed blow by.  Once inside the shop, it is a small and quaint with a few pre-packaged offerings as well as more chocolates available by the piece.  The counterperson confidently confirmed that the pretzel bark was vegan, and surprised us by telling us that so too was the hazelnut truffle.  In a rare exhibition of restraint we decided to go only with what we had come for, and left with our bark in tow.

Unexpectedly, the bark is filled not with pretzel chunks, but rather pretzel dust... with a few rice crispy-sized morsels throughout. 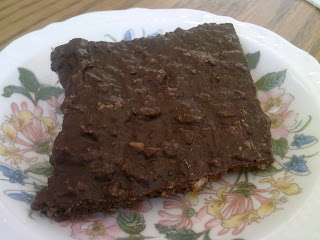 The effect reminded me of chocolate ice cream I once ate that was filled with mint slivers so minuscule that they actually dissolved in your mouth as they came into contact with your tongue.  The pretzel dust did the same in a similarly satisfying manner, with the added bonus of saltiness.  I was surprised by how thin the "bark" was, but I suppose that's because it didn't have to be as thick as a bark containing large nuts or chunks.  VM and I both agreed that, for our taste, the chocolate could have been significantly darker, but enjoyed it just the same. 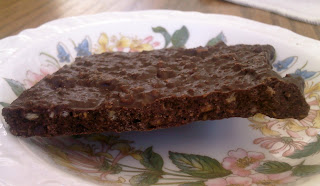 Overall, it was delicious; you really can't go wrong with the chocolate/pretzel combination.  The unique spin on the texture was impressive, but I did miss the gigantoid crunch of an an actual pretzel.  I've since decided that the only way to rectify this dilemma is for Bespoke to take it upon themselves to dip a whole pretzel into their pretzel dust-filled chocolate for the best of both worlds. Who can argue with that kind of logic?  Pretty much nobody since I moderate my comments ;-)