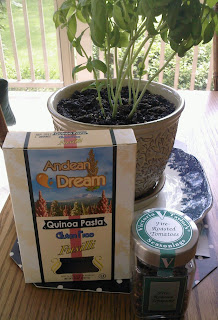 After my unsolicited review of Andean Dream's yummy quinoa cookies, they were kind enough to send me some organic, kosher, gluten-free, quinoa pasta to try.

The first thing I want to note is that Andean Dream's pasta is not simply rolling around the cardboard box like most brands.  Instead, it is neatly encased in a sealed bag within the box, which I think is a nice touch.  Additionally, the pasta pieces generally appear considerably "cleaner" and less brittle than regular pasta.  I don't know if this is because they are lighter in color, shinier, or whether it's just a figment of my imagination; judge for yourself.

I started out with my fave: spaghetti (actually, my favorite is angel hair, but they don't make that).  The package says to cook for 13-15 minutes, but I had to do so for almost 25 in order for it not to be al dente.  Throughout the cooking process, I had significant issue with the strands sticking together in stiff clumps of 5-8 rods.  I tried to pry them apart while the pasta boiled, but some still made it to the final dish; it's not so easy to separate boiling hot strands of partially cooked spaghetti: with your fingers, a fork, or a knife.  Note: I do boil pasta with a pinch of salt and a splash of EVOO in the water, so I never have sticking issues; not sure what went wrong. *Andean Dream has informed me that, judging by my pictures, I "needed to use a slightly bigger pot with more water to prevent the pasta from sticking together." 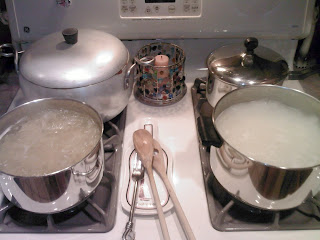 Another thing to note is that the boiling water becomes considerably more starchy than with regular pasta.  I presume this is because the pasta is made of a mixture of quinoa and rice flour, but you'll see here that the difference between the quinoa pasta on the right and the semolina pasta on the left is quite significant.  This fact is neither here nor there, but I figured I'd point it out since I did find it unusual, as someone who has never cooked with quinoa pasta before. 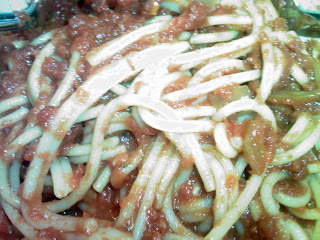 Once cooked and prepared with spicy, fire-roasted tomato, basil sauce I don't know that I would have guessed anything was different except for the couple of clumps that made it through the process.  The leftovers did seem to absorb the sauce more than with semolina pasta, so keep some extra on hand. 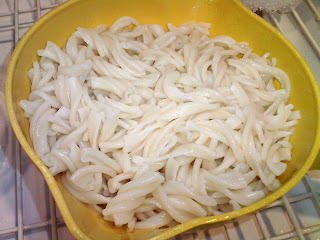 Next I tried the fusilli.  With more fire-roasted tomato flakes to utilize and my basil plant flourishing, I went with a cold pasta salad for a slight variation.  The cooking water was just as starchy as with the spaghetti, and again I needed it to cook for 25 minutes.  While the considerable cooking time caused the fusilli to unravel a bit, I will note that they did not break-- even when they were cooled and tossed; it almost seemed to be sturdier than traditional pasta, although not tough tasting in any way.  Once again, I found no taste difference in the finished product than if I had used semolina pasta, but-- again-- leftovers did soak up a considerable amount of dressing. 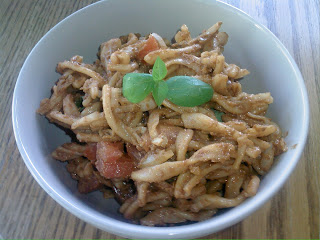 I am not gluten-free, but I am both a fan of quinoa and of getting the most nutrient bang for my buck: especially when cooking for others.  So, I would definitely recommend quinoa pasta as an alternative to semolina.
Posted by Abby Bean at 6:41 PM

Email ThisBlogThis!Share to TwitterShare to FacebookShare to Pinterest
Labels: quinoa