A Nosh at Papa Ganache 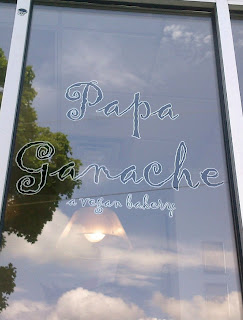 Nestled in the fishy town of Keyport, NJ lies a relatively new vegan bakery, Papa Ganache.  Catering to vegans, allergy-sufferers of all kinds, and the public at large, it is a welcome addition to the often bleak, shoretown, vegan food landscape.

As an added bonus to the exquisiteness of their sheer existence, they proudly proclaim themselves "vegan" everywhere you look!  While I understand the logic behind vegan establishments choosing to omit the word (so as not to alienate the general public, etc.), I give much respect to those who say it proud. 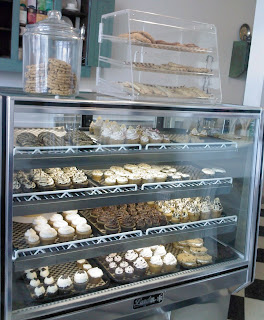 Like any vegan bakery worth it's chips, Papa Ganache offers a rotating menu of cookies, cupcakes, cakes, loaves, and biscotti.  There are plenty of inventive selections and flavor combinations to choose from, so chances are you might have to order a vast assortment "for research purposes". 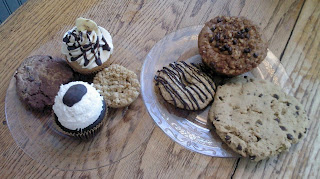 To this end, VM and I went with the following buffet nosh.  Please admire our restraint. 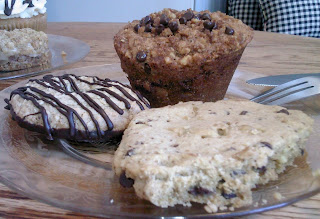 We jumped right in with the chocolate chip walnut cookie, which was large, crisp & chewy, and filled with walnut chunks and generous chippification.  Of late I have been trying to appreciate nuts in cookies for the added crunch and saltiness; this cookie delivered on all counts.  Most importantly, I didn't feel that the chippage quotient was sacrificed to make room for the nuts.  The personal-size chocolate chip coffee cake was fresh and warm out of the oven, perhaps unfairly making it an instant VM favorite.  It was delicious, generously filled with cinnamon, and sprinkled throughout with chocolate chips.  It is also available without chips, but I'm not sure why anyone would order such a thing. 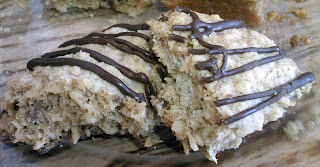 The last item on this plate to be scarfed tested was the easy samoa cookie.  I have been meaning to make a vegan version of this cookie for ages, and really thought I'd buckle down and do it when VCIYCJ came out containing a recipe.  Fast forward a couple of years and now I don't have to bother because Papa Ganache has done it for me, no doubt significantly better (and much more beautifully) than I ever could have achieved.  Soft, filled with coconut, and expertly drizzled with creamy, dark chocolate; this cookie was excellent.  Could it have had something to do with the ultra smooth layer of chocolate coating on the bottom?  Perhaps.  Oh, and it's gluten-free (but you'd never guess in a million). 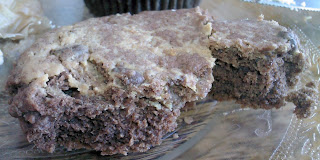 Moving on to the next plateful of goodies, I tried the chocolate chocolate chip peanut butter cookie first.  Not my favorite chocolate/PB matchup of all time, but a valiant and respectable effort.  I would imagine it would sufficiently fit the bill for novice lovers of the combo, but I'm someone who can eat chunky PB straight out of the jar and still add whole peanuts and probably should just do that instead of complaining about things not being peanut buttery enough.  Did I still eat every last crumb?  Yes, I did. 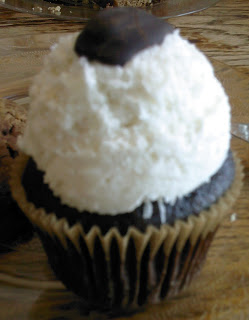 And then it was time to bust into a cupcake.  Neither VM or I are huge cupcake fans, but with a case full of the beauties in a vast assortment of enticing flavors, it was hard to resist.  First we tried the almond joyous cupcake: chocolate cake topped with extremely coconutty buttercream frosting, a whole almond, and a thick shell of ganache: dark chocolate shell reminiscent of brown bonnet.  Can we have this on everything, please?  If chocolate/coconut is your thing (and if it isn't I don't want to know about it; clearly there is something wrong with you), this is the cupcake for you.  It is the cupcake equivalent of almond joy, but better because the chocolate is dark! 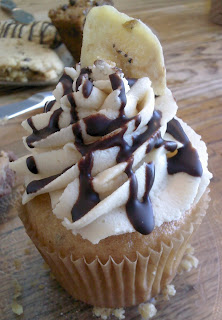 On a cupcake roll, I next decided to try a concoction that VM feared, but was what had brought me here in the first place.  Of course I kid; a vegan bakery opens and I practically manifest, but the discovery of the existence of the drenched Elvis cupcake surely sped up the process.  Here you have banana cake topped with peanut butter buttercream frosting, more of that delectable, dark chocolate shell/drizzle ganache, and a banana chip garnish.  Ta da!  While I am not a fan of cupcakes in general and frosting on the whole, this cupcake creation was a real winning combination of tastes and flavors.  VM & I play a game called, "If you came back tomorrow what would you order?" and this was my pick:  peanut butter, banana and chocolate goodness. 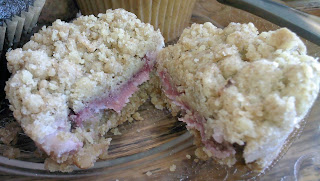 Last but certainly not least was the unassuming strawberry cheesecake cookie.  I had no idea what to expect, but it sounded so interesting that I had to try it.  Once again, VM was wary, made me try it first, and then excitedly took a bite when she saw my response.  We both agree that to call this a mere cookie is a vast understatement; it is like a cross between a light crumbcake, a shortbread cookie, a strawberry cheesecake, and a danish: all packed into a relatively small circle.  I have never tasted anything like this, and it too definitely made the list of what I would order again!  Note: this one was also gluten-free and I've thusly decided that those suffering from gluten intolerance really have it made. 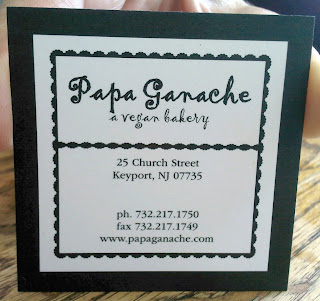 Obviously, the trip was a success.  I would like to note that there are some adjectives that I couldn't bring myself to use throughout this review simply because they would have been too repetitive.  Suffice it to say that soft, moist, and incredibly fresh could describe just about anything and everything that we tried.  I don't imagine that you could make a disappointing selection, but I'm willing to continue to test in the name of research. 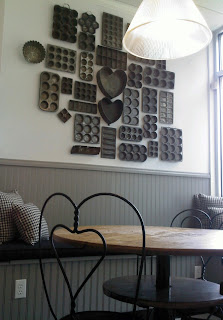 In addition to the yummy goodies, the actual Papa Ganache shop is gorgeous: a bright, clean, eclectic, and inviting space.  As a matter of fact, it reminded us of a cross between two of our favorite places: Lula's Sweet Apothecary and Back to Eden Bakery. They serve hot and iced tea and coffee, and there's even Wi-Fi if you want to wile away some time from breakfast into lunch without anyone judging your back-to-back sweet meals (who would do that?).  Bonus: there is even a small parking lot in front of the shop, so chances are you'll be lucky enough to snag a good spot instead of fighting for street parking amidst all of the water-minded, summer folk.  It's much easier to settle into the coziness of the shop without worrying that the world's worst parallel parker thinks they can fit... 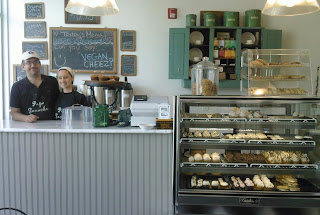 Only adding to the warm atmosphere of Papa Ganache were Todd and Allie, two of the three owners that we had the pleasure of meeting and speaking with during our visit.  Community minded, committed to animal rights, and creators of righteous baked goods, these hard-working and friendly folks are the most recent additions to the long line of entrepreneurial members of the vegan community who are furthering the cause through, among other things, dessert activism.

It was a pleasure visiting Papa Ganache, meeting Todd and Allie, and especially having the opportunity to enjoy all of the goodies.  I would highly recommend relishing some time (and baked goods) here; all are welcome.
Posted by Abby Bean at 7:25 AM