In order to illustrate how factors such as your mood and state of mind affect your approach, one of my college professors gave the same drawing assignment on two separate occasions.  With that in mind, in light of the grudge I was holding against the chocolates in my previous post, I decided to take his advice and, instead of shunning them, taste with a clearer head and neutral opinion- once I had given my disappointment in the experience a chance to subside. 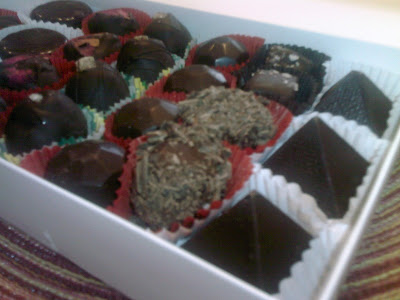 As previously stated, I was extremely anxious for the opportunity for VM and I, dark chocolate lovers, to try the lauded Lagusta's Luscious Bluestocking Bonbons. 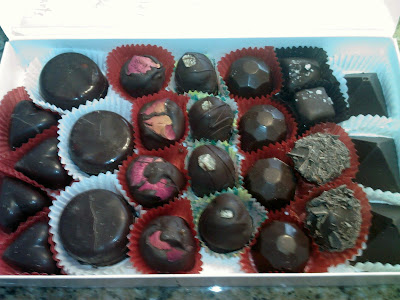 So, on this day, I approached the box of candy with my original intention intact: to enjoy handmade, artisanal chocolates created by a vegan blogger and chocolatier I have long admired.


We purposefully started off with the flavor I knew would be VM's favorite: the raspberries de pizan; I couldn't have been more right if I were psychic.  While I am no fan of fruity desserts, for the purposes of this tasting I gave it a try.  Even though the flavor pairing isn't my particular preference, the perfection of this truffle was not lost on me.  For VM, however, this type of truffle is tailor-made and this specific truffle was extraordinary.  We were both wildly impressed by the freshness, taste, texture, etc.; it was truly exquisite and exactly what I had originally expected from a chocolatier of Lagusta's caliber.  Throughout the tasting, this truffle remained VM's #1, so I promised the rest to her.


Next up was the flavor I expected to be my favorite: the chocolate coconut cream pyramids; right again.  Filled with super moist, non-artificial coconut filling; forgive me for describing it as a high gourmet version of the Mounds bar (minus the almond) I recall fondly.  Surprisingly, VM disagreed; it was actually too moist for her taste and, for the record, she maintains that a Mounds bar is drier.  I'll defer to her on this one because she's tasted the original much more recently than I have; no worries: more pyramids for me. 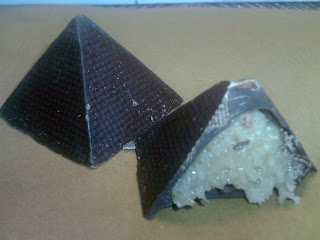 Because I don't like flowery flavors, the beautiful rose petal decoration on the pomegranate truffles had me wary to try them.  But the taste was neither flowery nor bitter- what I generally equate with pomegranate; instead a smooth, slightly fruity truffle that VM deemed her #2 favorite behind the raspberry.  I'd put it ahead, so we'll share the remaining truffles. 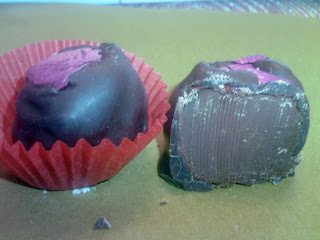 The crumbly look and texture of the chipotle-vanilla truffles was extremely enticing.  However, I knew that what lurked underneath was reason for me to be trepidatious.  As a considerable spice fiend (moreso than VM), I can never seem to get my food to pack enough heat; but, I still don't like the idea of spicy chocolate.  VM unequivocally bowed out of this taste, so I was left to go it alone.  It was not an exception.  While I loved the chocolateyness of the truffle, once the spice kicked in it was a definite no for me.  I will offer the remaining truffle to a friend for another opinion, but this pairing stays on my "no thanks" list. 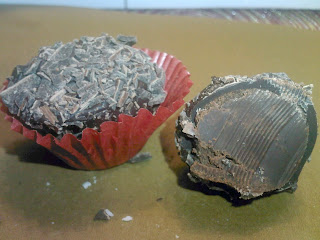 VM loves peppermints; you will never find her without a handful in her mouth or pocketbook.  I, on the other hand, abhor them.  Ironically, neither of us like peppermint patties, but I wanted to include Selma's peppermint patties in the assortment so that my friend who loves P. Patties could try them.  As a result, this taste could have gone either way.  Surprisingly enough, VM didn't like them at all, but I was unexpectedly intrigued by the combination of the dense, non-obnoxious mint and thick chocolate.  I actually ate two, then had to remind myself to save some for said friend! 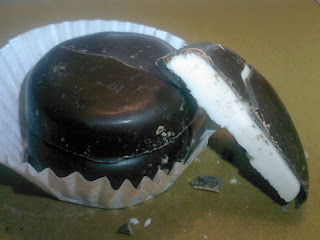 I'm glad that when we tried the rosemary sea-salt caramels I neglected to recall that rosemary was an ingredient.  Had I remembered, we both would have been extremely hesitant to try them.  As it turns out, this caramel was not of the variety of the chewy, Kraft cubes of my childhood, but instead a harder caramel that softens as you chew.  The sea-salt was a nice touch, and vastly milder than the black salt that I so disliked in the anatomical hearts of the February chocolate of the month.  In fact, I enjoyed the candy considerably...right up until the rosemary finally kicked in at the end, and then- not so much.  VM even less so.  We are not rosemary fans in the least: in cooking and, as it turns out, in sweets. 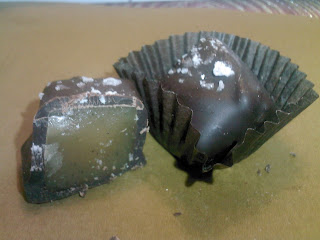 The last of the individual chocolates to be tasted were the yuzu white chocolate truffles.  I hadn't a clue what yuzu was, but I figured I was already in for a pound.  VM and I collectively eschew crystallized ginger, so we picked off what we assumed was such before partaking, and then bit into a most cool, refreshing, excellent tasting, fluffy-textured truffle.  I personally found it more vanilla tasting than white chocolate, but I think the reason we both enjoyed it so much was that it was extremely reminiscent of the liquor Cointreau that is a staple in the Bean house.  Unusual and divine, this truffle was definitely a favorite of mine, and ranked a solid #3 for VM behind the raspberry and pomegranate truffles, respectively. 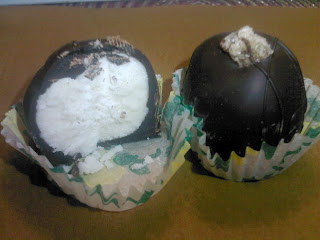 And, finally, we revisited the two previously-tasted chocolates-of-the-month and confirmed that they simply consist of flavor strengths that are not- by any stretch of the imagination- for us. Unfortunately, there were a lot of them. 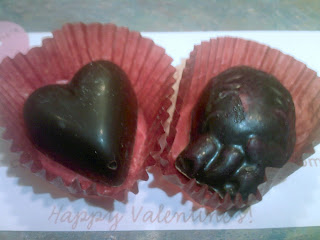 The other chocolates that we had anticipated trying: coconut-rum truffles, Kahlua truffles, and Pauline's peanut butter cups would have been much more our speed; it goes without saying that I am still dismayed that what I expected to be an altogether fun tasting wasn't entirely so. 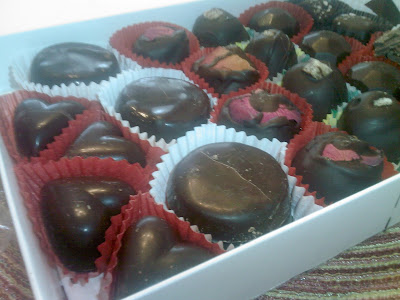 But, nonsense notwithstanding, I am satisfied that my original expectation for these chocolates to be impressive was fulfilled and that Lagusta's Luscious Bluestocking Bonbons is truly the artisanal chocolatier I anticipated, with offerings that exceed the expectations of my own chocolate/sweet loving mouth, as well as provide more interesting concoctions for more adventurous foodies.
Posted by Abby Bean at 4:48 PM