I've been eyeing Lagusta's Luscious Bluestocking BonBons for a loooong time.  And by "eyeing" I mean that I have painstakingly studied the offerings to the extent that I have long kept a detailed post-it on my desk at work with all of the flavors that VM and I should try.  Guilt assuaged by the fact that the "chocolate care" section of the site distinctly points out that, "...chocolates store beautifully in the freezer, so if you're thinking of buying a few, why not buy a few more?", a hefty order was placed.

In record time, a huge USPS box was at my door, bringing with it the immistakable smell of deliciousness.  Unfortunately, when I was recycling the mailing box I was disappointed to see that the actual shipping cost was a fraction- about 25%- of what I had been charged.  Considering that if you live in the vicinity, Lagusta offers free delivery, such a mark-up comes across as a penalty to those who don't.  While it is my choice to spend a lot of money on product, I tend to feel taken advantage of when there is an absurd profit made on shipping. [Update, 2/15/11: Lagusta has been kind enough to credit my account in the amount of the shipping over-charge.] 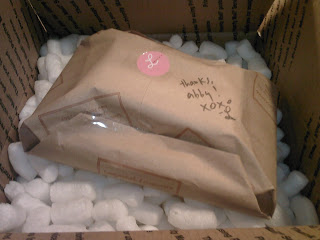 The first box VM and I opened contained the Valentine's chocolates of the month.  According to the website, the "The sweet simple heart shape is filled with rosewater (dairy-free) cream, punctuated with a high note of pomegranate."  I enjoyed it at first bite, but then extreme floweriness took over.  I personally like rosewater, but this contained entirely too much for my taste; VM agreed.  The anatomical heart was described as "solid chocolate made with 66% dark chocolate, packed with lightly crushed cacao nibs, locally-roasted coffee beans, black salt enriched with volcanic minerals, and crunchy bits of bright dried cherries."  This flavor started out fantastic: chocolate, crunch, mocha...and then the salt hit me.  Hard.  Before I could say anything, VM, lover of all combinations of chocolate and salt, said between chews, "Very salty, no?"  The saltiness continued to overpower our tastebuds long after we'd swallowed.  They were so overwhelmingly salty that I actually suggested that they might have caused our blood pressure to elevate. 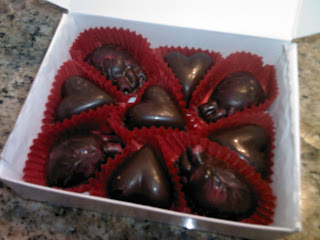 I was disappointed, but undeterred and anxious to dig into the big assortment.  I felt that it was possible that the Valentine's selections were simply too highbrow for me, as I am admittedly a fan of traditional flavors.  For this reason, I was very specific about the flavors that I wanted in my big assortment, and even sent an additional message in order to confirm my request.  The prompt response stated that they would "try to put as many of those in the box as we can!", which I took to mean that there would be as much quantity of my selection squeezed into the box as possible.  However, when we opened the box my glee at finding a handwritten flavor key quickly disappated at the realization that it contained less than half of the varieties I had requested. 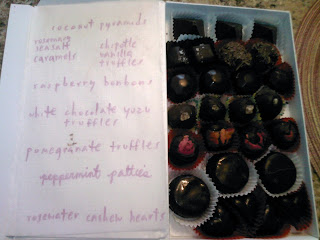 Certain that the error could be rectified, I immediately returned the box- untouched- to the fridge and contacted Lagusta.  She responded with apologies that they do not guarantee that you will receive exactly the assortment you request, suggesting that her intial response did not refer to the quantity of my selection, but rather to the fact that they would try to comply with as many of the requested varieties as possible.  She closed her response with encouragement to try the chocolates I'd received, most of which either don't appeal to me or are repeats of the flavors in the previous box.  As someone who doesn't make a habit of spending $100 on chocolate (and shipping), this was not the solution I was looking for, nor expected from a small, independent business.  If I'd wanted to order a generic box of whatever was on hand, I wouldn't have been so specific.

Make no mistake, I was so excited at the prospect of trying Lagusta's chocolates that as soon as I'd placed the order I began writing what I assumed would wind up a completely complimentary post about an admirable, vegan owned and operated company.  But, while I am undoubtedly impressed by Lagusta's commitment to quality, vegan confections (one need only check out the what they're made of section of her website in order to be), there is something equally important to be said for an interest in customer satisfaction, which, I am disappointed to say, is severely lacking in this case.

In our collective disgust, neither VM nor I have yet to taste any of the selections in the big assortment, nor do we have any inclination to do so.  Quite frankly, for the purposes of this post it doesn't much matter, as they've already left a bad taste in our mouths.
Posted by Abby Bean at 4:43 PM

New comments are not allowed.