After breakfast and lunch in Philly, we took a food break to visit the Eastern State Penitentiary for a tour. It was rich with centuries-old history and they do an incredible job tying that history in to the current crisis of mass incarceration; highly recommend. 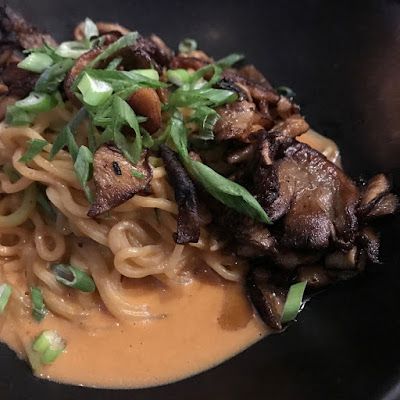 So, after spending hours there (seriously, clear yourself at least 4 hours to explore, take the guided & self-guided tours, and visit the art installations), our appetites were restored and we headed to Vstreet. Because we had an early reservation, we had the option to swap our table for seats at the Chef's table. I'd never sat at a Chef's table before and my friend was concerned that I'd find the running banter intrusive to our meal, but we decided to give it a go.

The hostess was extraordinarily accommodating with the switch and our server was a delight from the moment he greeted us. His pleasant demeanor went a long way in countering the impatience we immediately experienced when, between the two of us, we still had to google 1-2 ingredients in each cocktail on the menu in order to make our decisions. 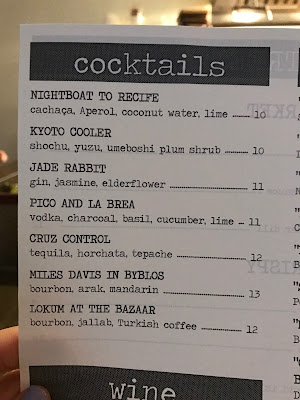 I chose the Cruz Control: tequila, horchata, tepache, because our server conceded, when pressed, that it was similar to a pina colada. Although I was disappointed that it wasn't frozen or particularly creamy, it did arrive with a sprinkle of cinnamon and an umbrella, which made me exceedingly happy (especially when said umbrella was transferred to my otherwise boring hairdo). My friend chose the kyoto cooler: schochu, yuzu, umeboshi plum shrub, which came with a radish garnish (!). 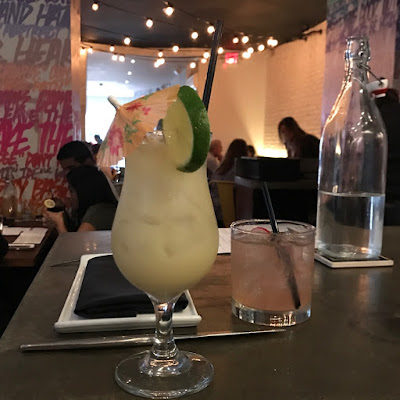 For comparison, this is the colorful seating in the curved portion of the dining room. 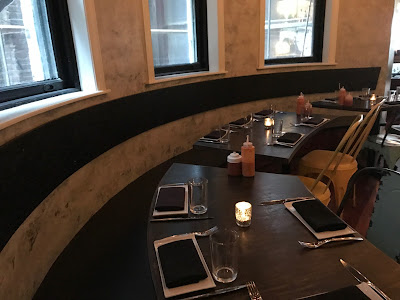 This is the Chef's table. It was empty when I took this photo upon being seated at opening, but there were actually three people cooking at any given time. None of them greeted us when we were seated. In fact, they didn't even look in our direction. It was immediately obvious that they had no intention of interacting with us in any meaningful or incidental way during the meal. I tried to be respectful of that choice, but it was disappointing and, frankly, insulting. Why offer Chef's table seating when you are not providing an semblance of a Chef's table experience? Please note that it obviously wasn't personal; while we dined, two other parties joined us at the Chef's table and none of us were met with eye contact at any given time, let alone conversation. The chefs literally did not acknowledge our existence at any point during the meal. In fact, they seemed to go to great pains not to turn their attention past an invisible line they'd made a pact to demarcate between their kitchen area and our dining area. 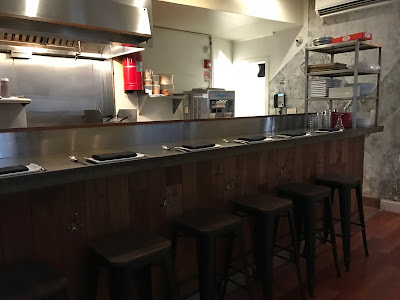 This is why we were especially grateful for our pleasant server, whose recommendation was for 2 people to order 4-5 plates from the menu- not including dessert. my friend an I agreed on 4 plates to start, reserving the right to supplement as needed. 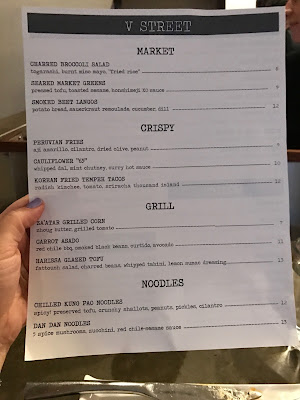 Our first choice was the charred broccoli salad: togarashi, burnt miso mayo, "fried rice" from the market section of the menu. The mayo was very tasty, but I was disappointed that it was a cold dish. Not lukewarm or room temperature: positively chilled. As a result, the florets weren't crisp and no more than a smidgen charred. The "fried rice" was along the lines of the crispy rice noodles PF Chang's vegetarian lettuce wraps are served upon, so that was a yawn for me. 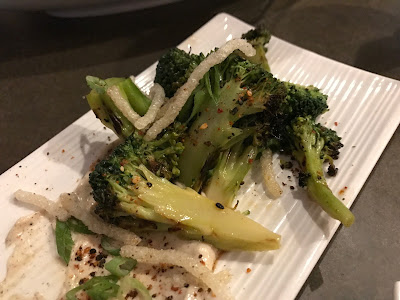 You might not be surprised to learn that after we watched the chef prepare the dish right in front of our faces, instead of him having just handed it directly to us- aplomb optional, it was placed just out of our reach and left for our server to pick up and deliver. Quite a lot of pomp & circumstance in order to maintain the charade of an invisibility curtain between chefs and diners within a 2 square feet space. This remained the procedure throughout our meal; I've made a diagram to illustrate the absurdity:

Next up were the Korean fried tempeh tacos: radish kimchee, tomato, sriracha thousand island ordered specifically because VM and I still talk about the phenomenal crispy tempeh tacos from Horizons. These were good tacos, but- in comparison, they were a disappointment. They weren't crispy even though they were under the crispy section of the menu and nothing really wowed for me other than the flavor and richness of the dressing. They were better than the broccoli dish, but I was still waiting to be impressed. 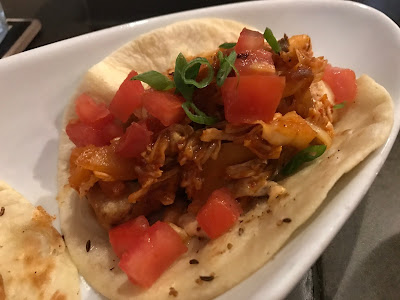 Thankfully, the harissa glazed tofu: fattoush salad, charred beans, whipped tahini, lemon sumac dressing from the grill menu was a step up from the tacos, so things were incrementally improving as we progressed through our meal. I greatly admired the plating of this dish- it was the first one that seemed as artful as expected. While this combination was still missing an element from my perspective- perhaps something as simple as a crisp shard of lavash, it was both hardy and refreshing. 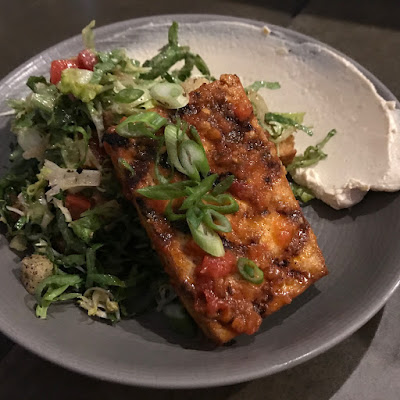 At this point my dining partner was petering out on me and I could sense it. Luckily, the dad dan noodles: 5 spice mushrooms, zucchini, red chili-sesame sauce were the highlight of the meal and I was able to gobble up more than my fair share as a result of her limitations. The long noodles and flavorful broth paired with the chewiness and umami of the mushrooms was divine. While I can't say I wasn't disappointed that this was the only savory dish that knocked my socks off, I was grateful for it.

Although she was full, I managed to convince my friend to order dessert. She chose the smallest one available: the soft serve of the day, which was served in a mini, clear flowerpot. The strawberry ice cream was served with rhubarb preserves and some kind of crumble. In fairness, they lost me at strawberry. BUT, I did taste it (ok, I ate half) and it was actually quite good- kind of like a deconstructed ice cream pie. The taste and texture of the soft serve more resembled frozen yogurt to me, but it was a good combo overall. 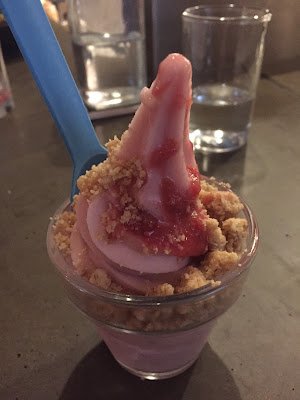 I, on the other hand, ordered a proper dessert... waffle: ganache, banana, miso caramel, sriracha, peanuts. Our server actually didn't bring us a dessert menu, he just described the options to us. His explanation made much more sense than the lists of ingredients on the menu and was considerably more appealing. When he got to the waffle, he mentioned that there was a slice of a homemade snickers bar atop and I was sold. I also asked him to add whipped cream, he did, and IT MADE ALL THE DIFFERENCE. 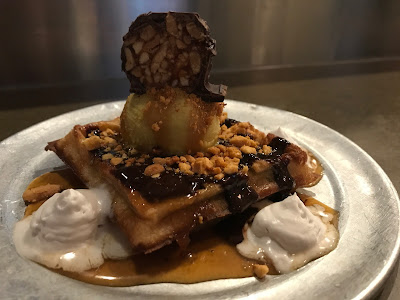 As you can see, the menu description doesn't really do justice to this dessert. It's a crisp waffle square smothered in miso caramel & chocolate sauce, drizzled with chopped peanuts, and topped with curry banana ice cream and a candy bar slice. There was just a hint of sriracha- mainly in the candy bar; it really was a masterpiece. 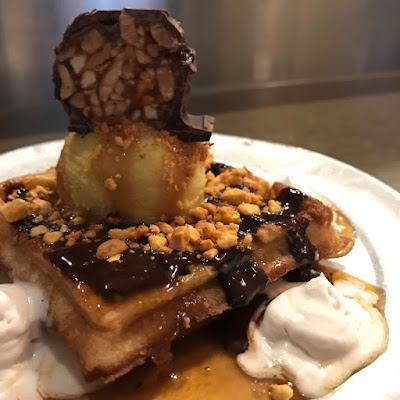 We thanked our waiter and paid our bill with zero acknowledgement from the chefs- not a backward glance, let alone a goodbye or thank you.

Yet, as we were leaving, two of the bartenders called out to complement their umbrella in my hair. Much like the hostess and server, they were friendlier and more engaging than they had to be and it was much appreciated.

It would be easy for me to say that, on a return visit, I'd just need to excise the problem of having sat at the Chef's table by sitting...anywhere else. However, at this point- I'm still so put off by the experience that I can't say that I found the majority of the food exceptional enough to offset the uncomfortable, anti-social experience. I am utterly perplexed why Vstreet offers a "Chef's Table," when it's just an awkward affair; it's not doing them any favors.
Posted by Abby Bean at 10:10 AM