As you'll probably recall, I visited some friends in Rockaway recently.  As a result of careful planning It just so happened that my visit coincided with one of the weekends that Champ's had set up shop.  Yep, that Champ's!!! 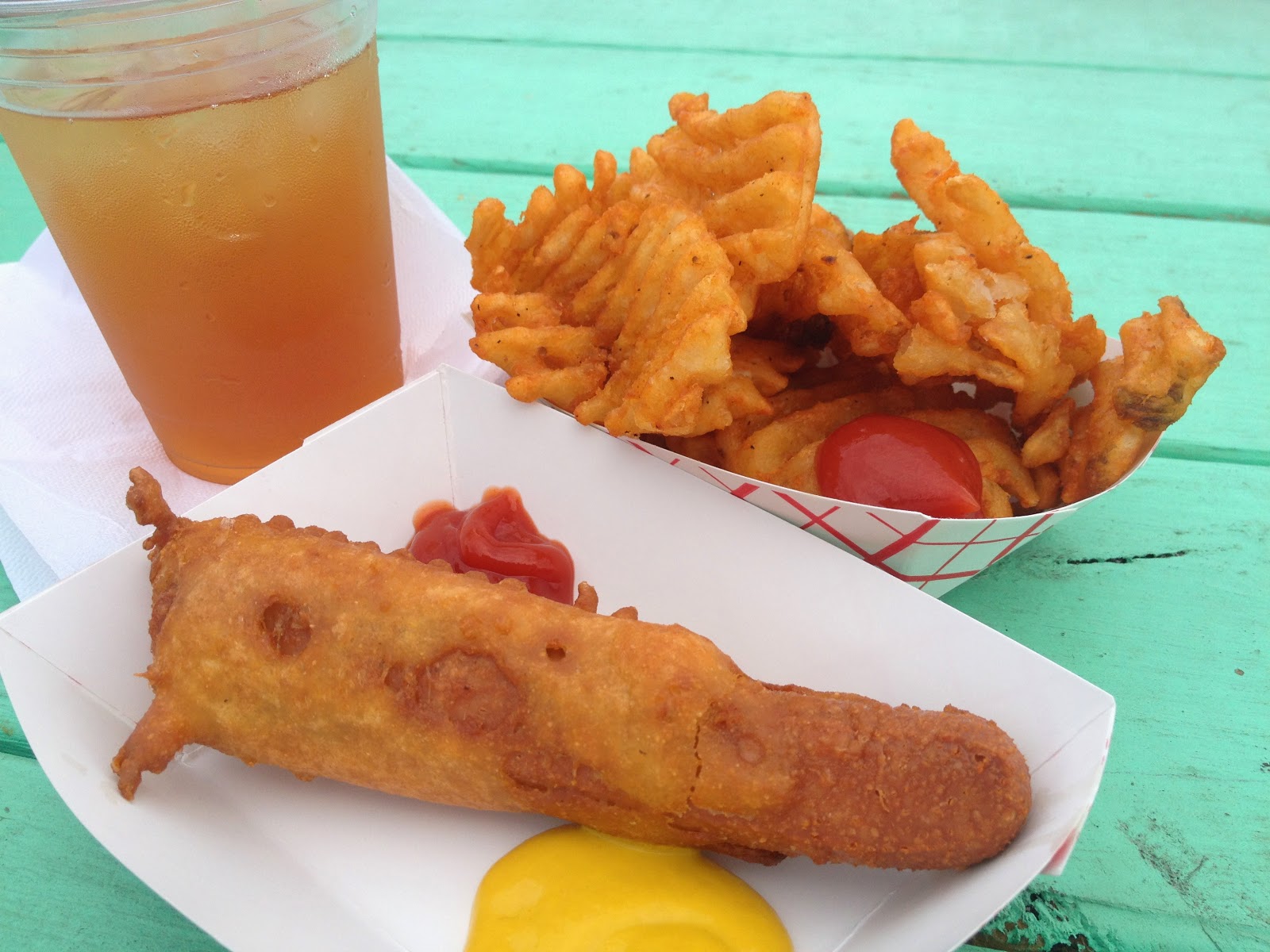 Nestled amongst standard beach fare [UPDATE: in reality I had no idea what else there was; I only had eyes for Champ's.  It's been brought to my attention that there was actually vegan-friendly Uzbek food, so I stand corrected.] at the Beach 97th concessions was vegan, cruelty-free Champ's doing what they do best: making mouths happy. 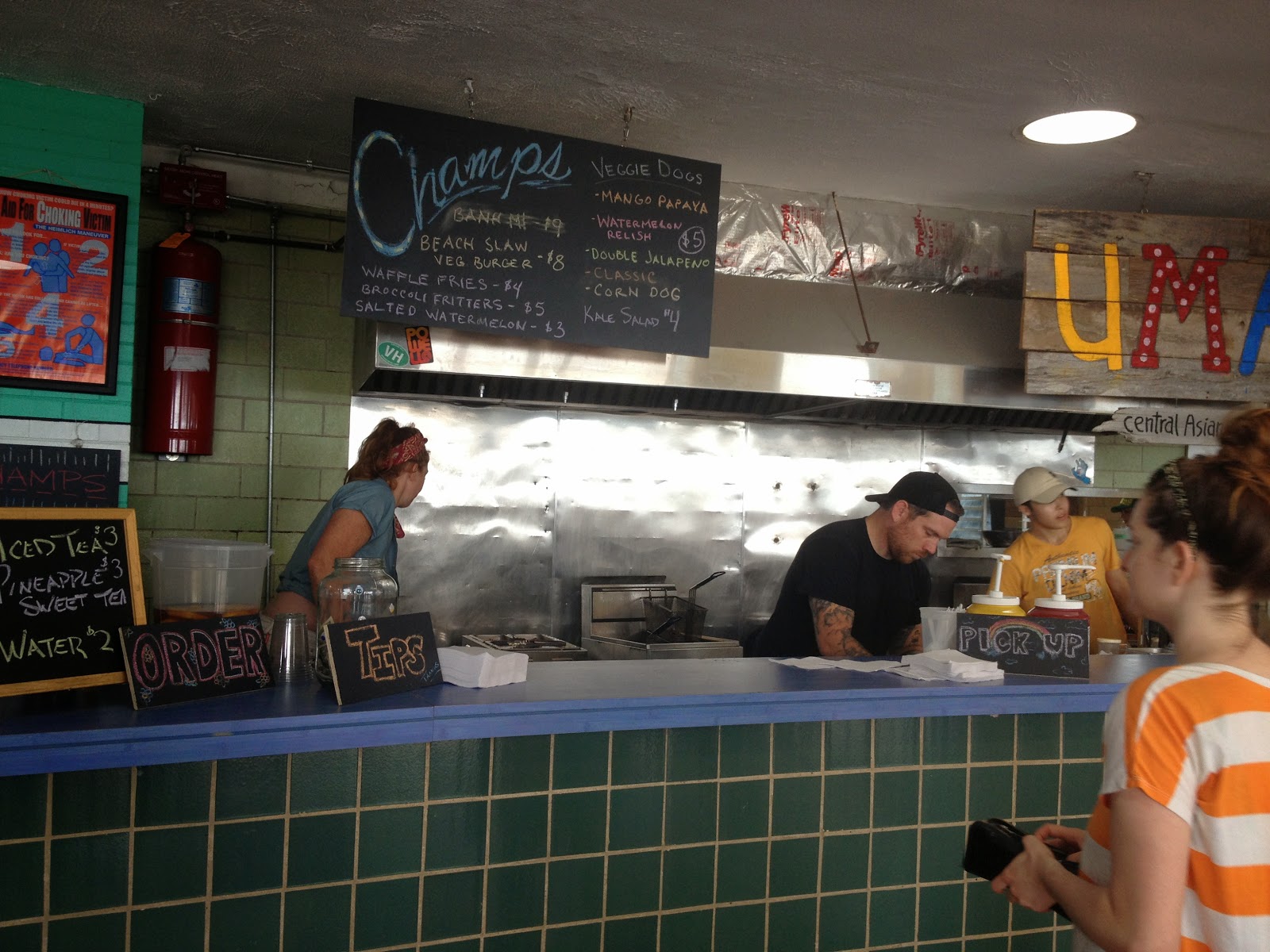 Check out their beachy menu!  The only thing missing was fried oreos. 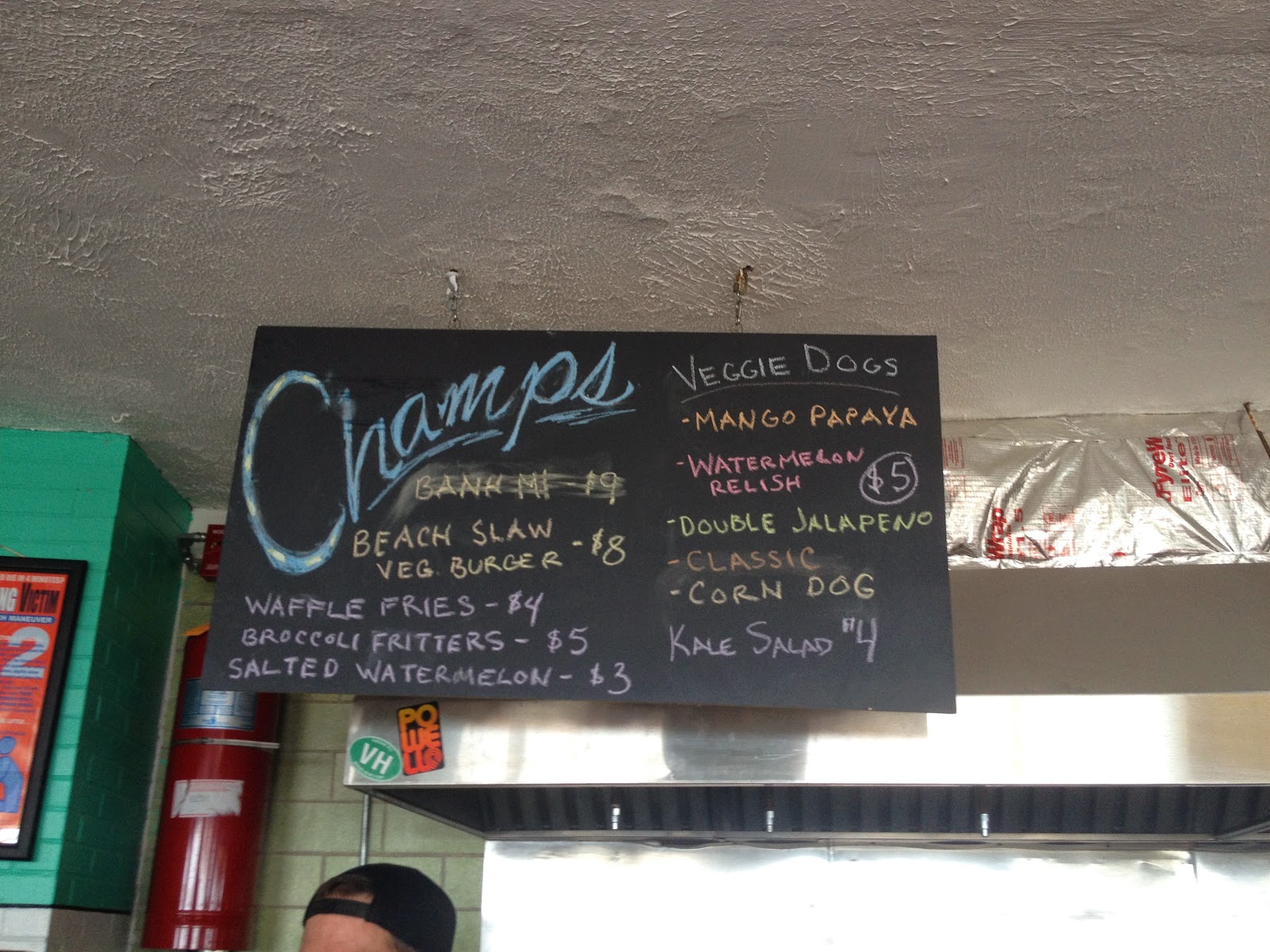 The whole set-up was adorably and indisputably Champs-y. 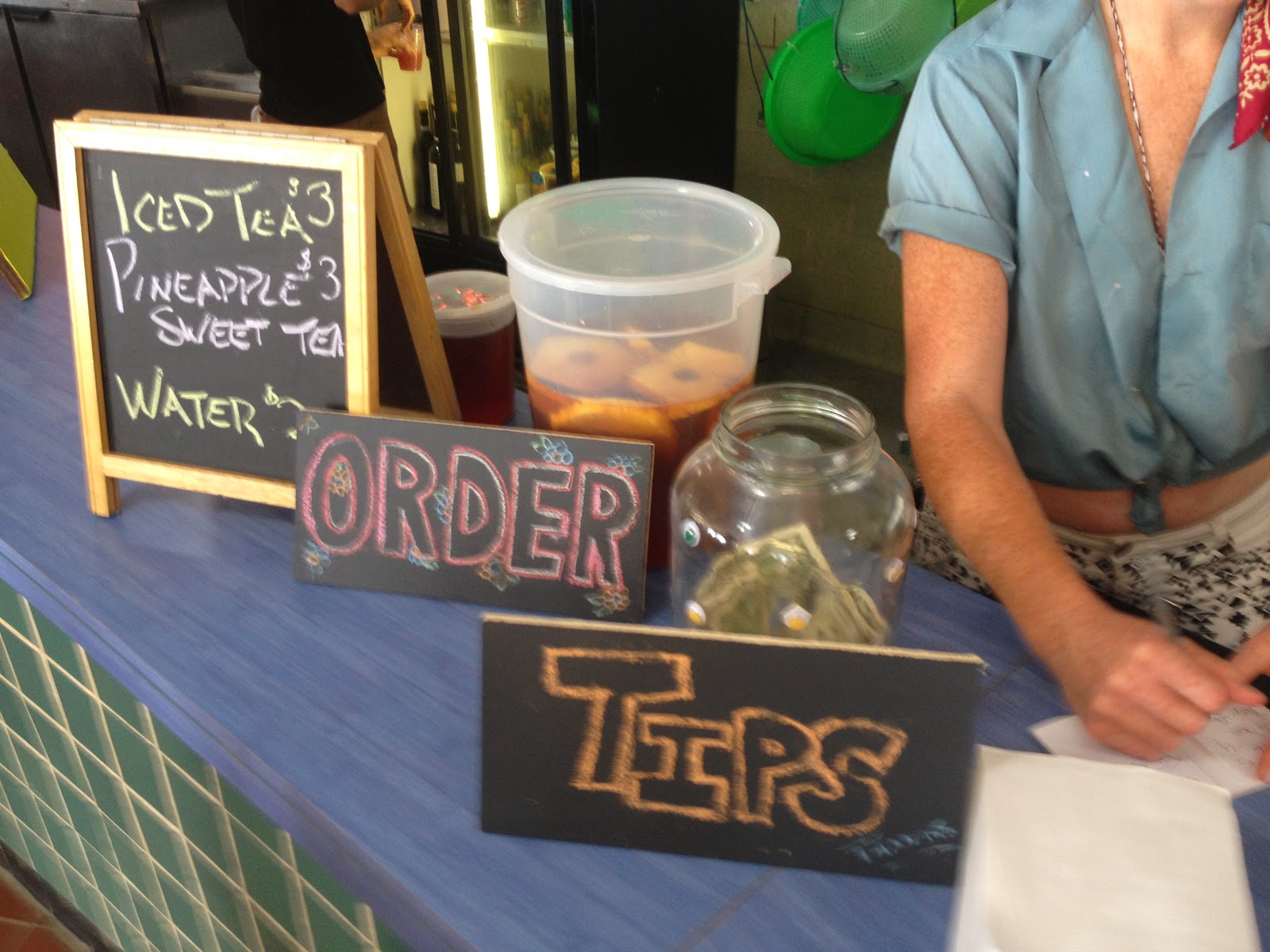 I went a little crazy: pineapple sweet tea, waffle fries, and a corn dog, but I wouldn't change a thing. 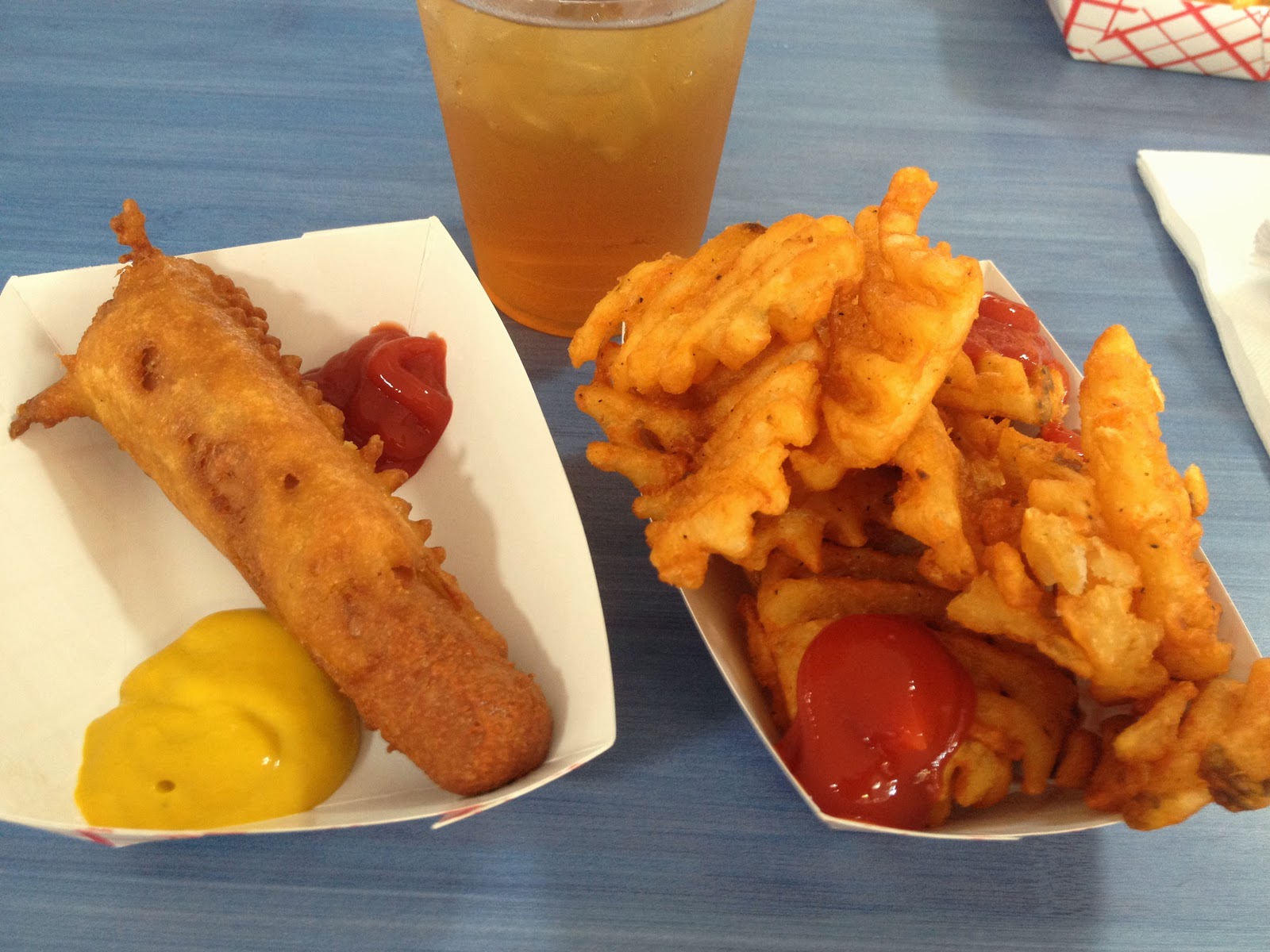 I was AT THE BEACH! 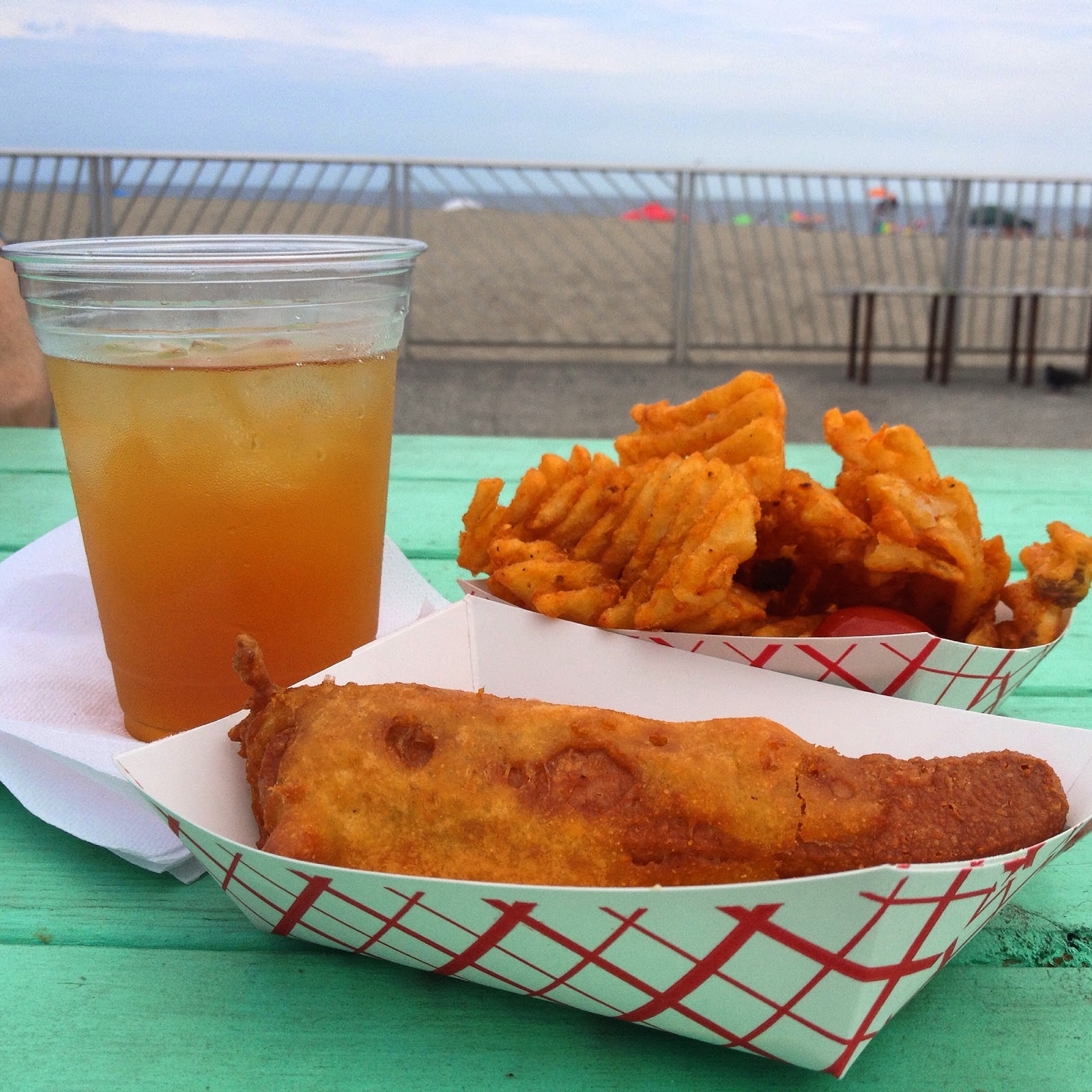 Truth be told, I wouldn't pass up a vegan corn dog anywhere. 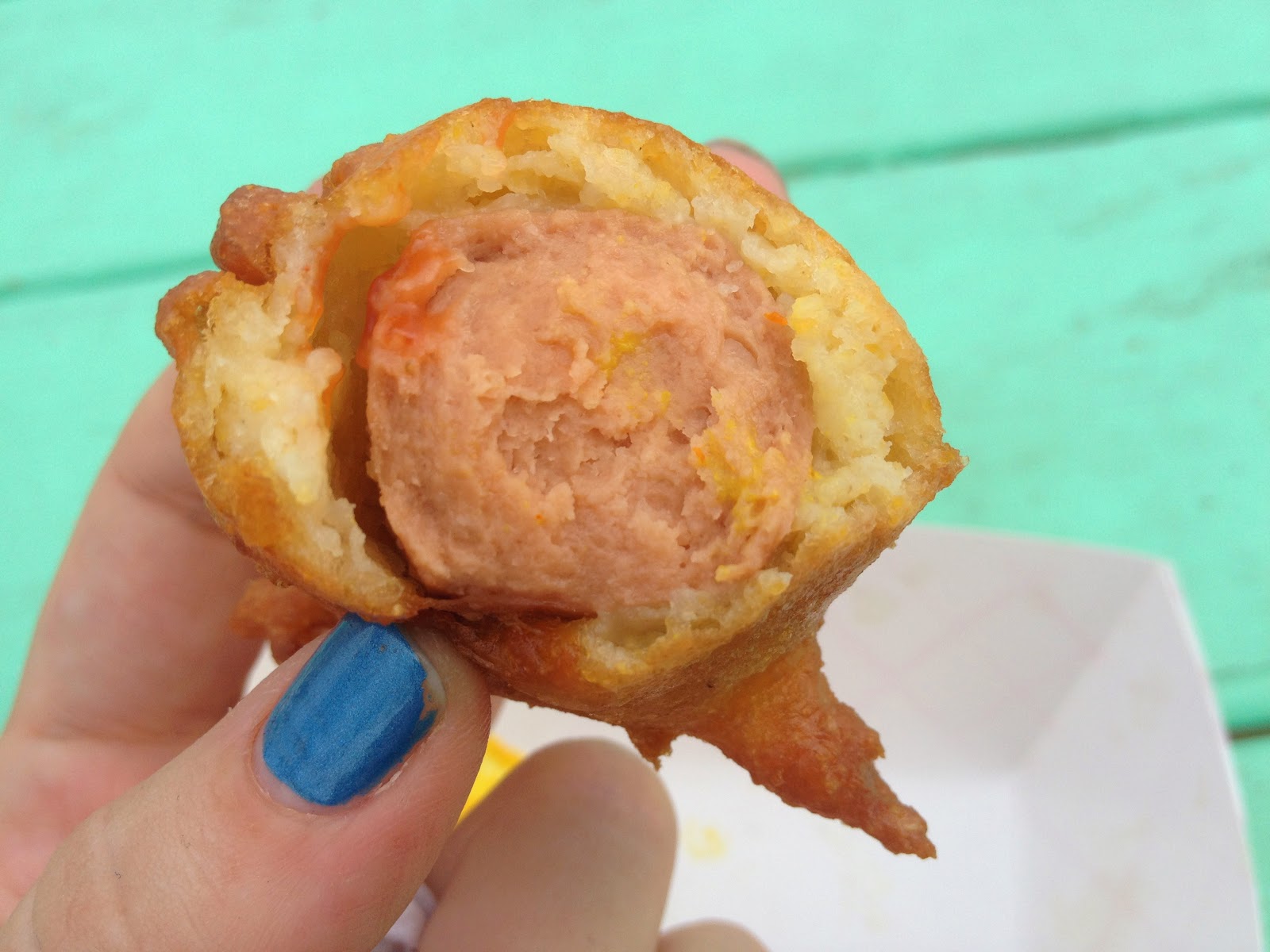 My friends had already visited them a couple of times already, so they handled their own orders with a little more restraint than I did.  Theirs:

The beach slaw veggie burger with added roasted pineapple (and shared waffle fries because I do share sometimes [UPDATE: I've been informed that these fries actually came with, but I've received confirmation that I did also share my order of fries, so I'm not a liar!]). 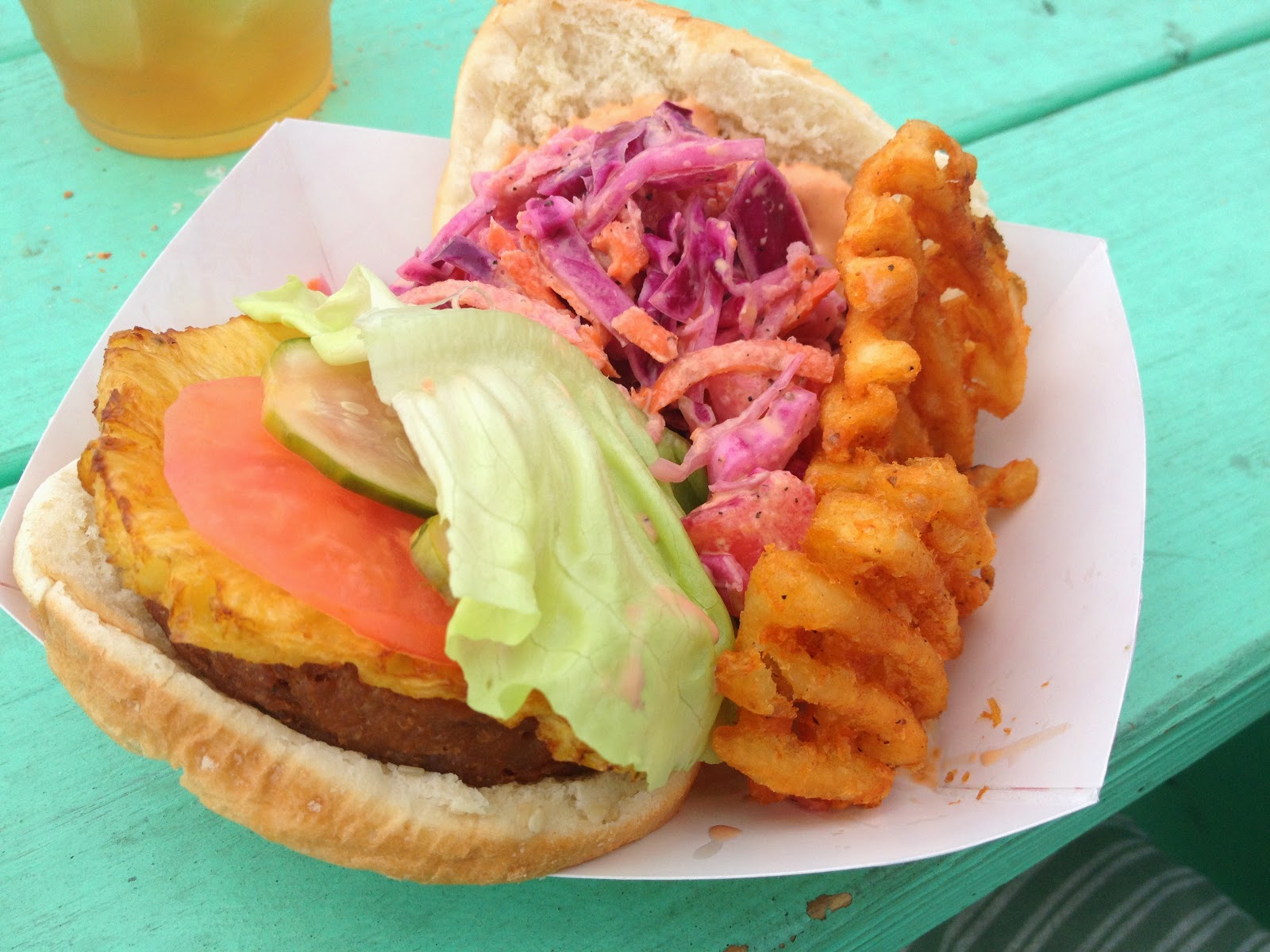 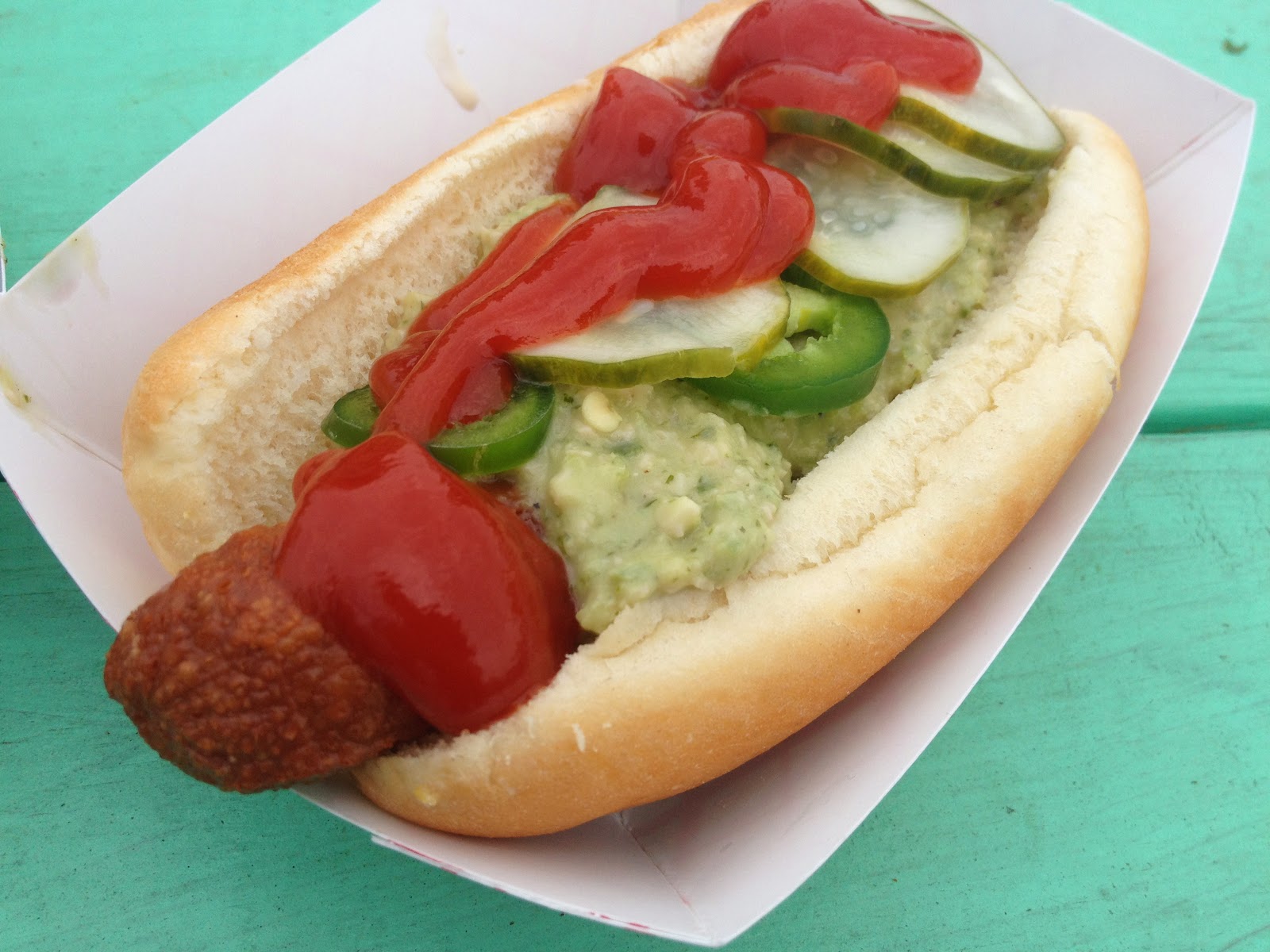 And, well, there's no way around this: kale salad.  I love kale as much as the next person, but even I was perplexed.  You might be thinking that ordering a kale salad at the beach is a sucker move.  Normally I'd agree with you.  BUT, the recipient of said kale salad went on to redeem herself in no uncertain terms, so forgive her momentarily as you await the story of her redemption. 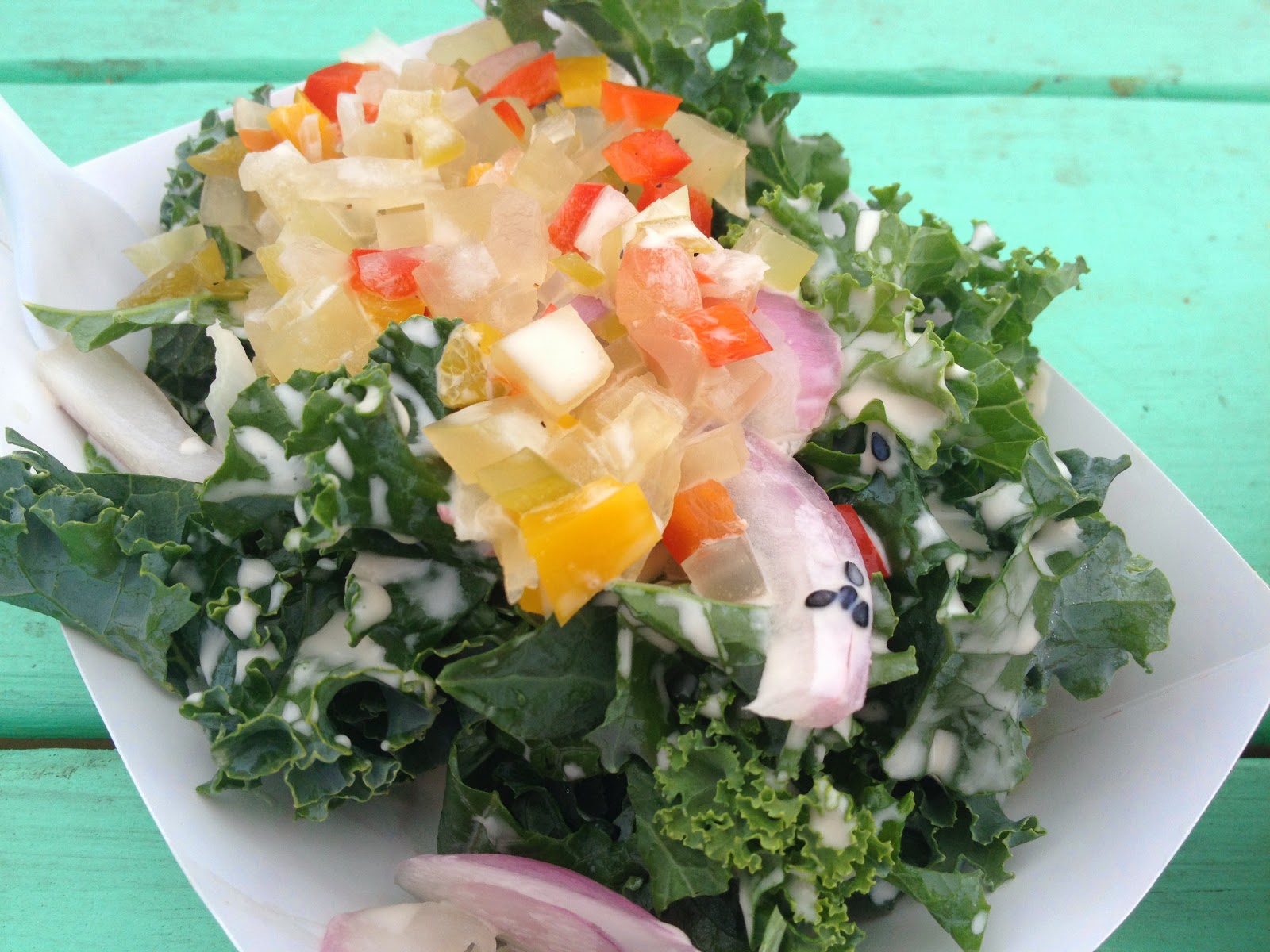 This is where we enjoyed our Brooklyn grub freshly prepared in Rockaway. 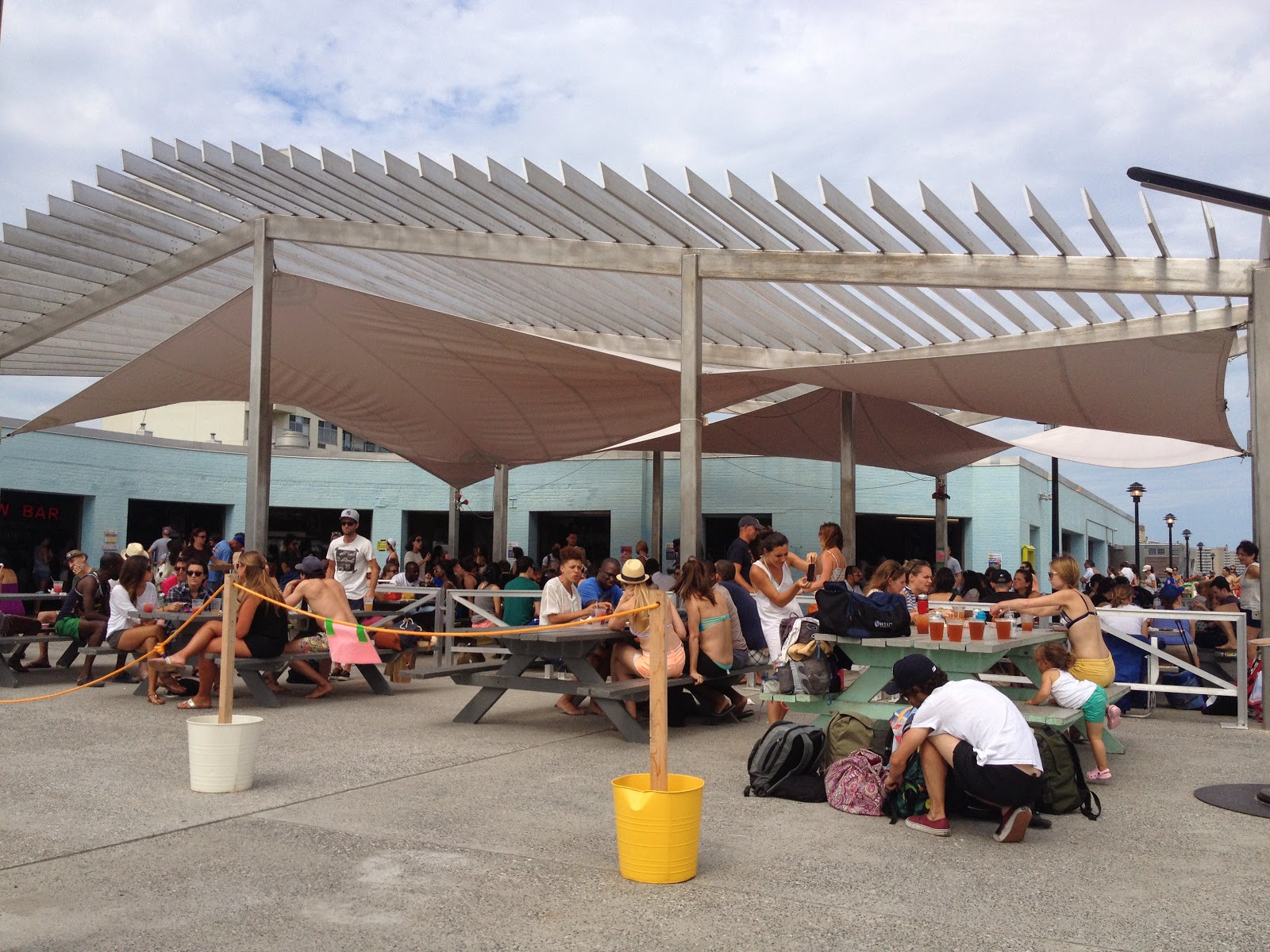 A very tired, sleepy, salty dog alternated using each of our legs for pillows. 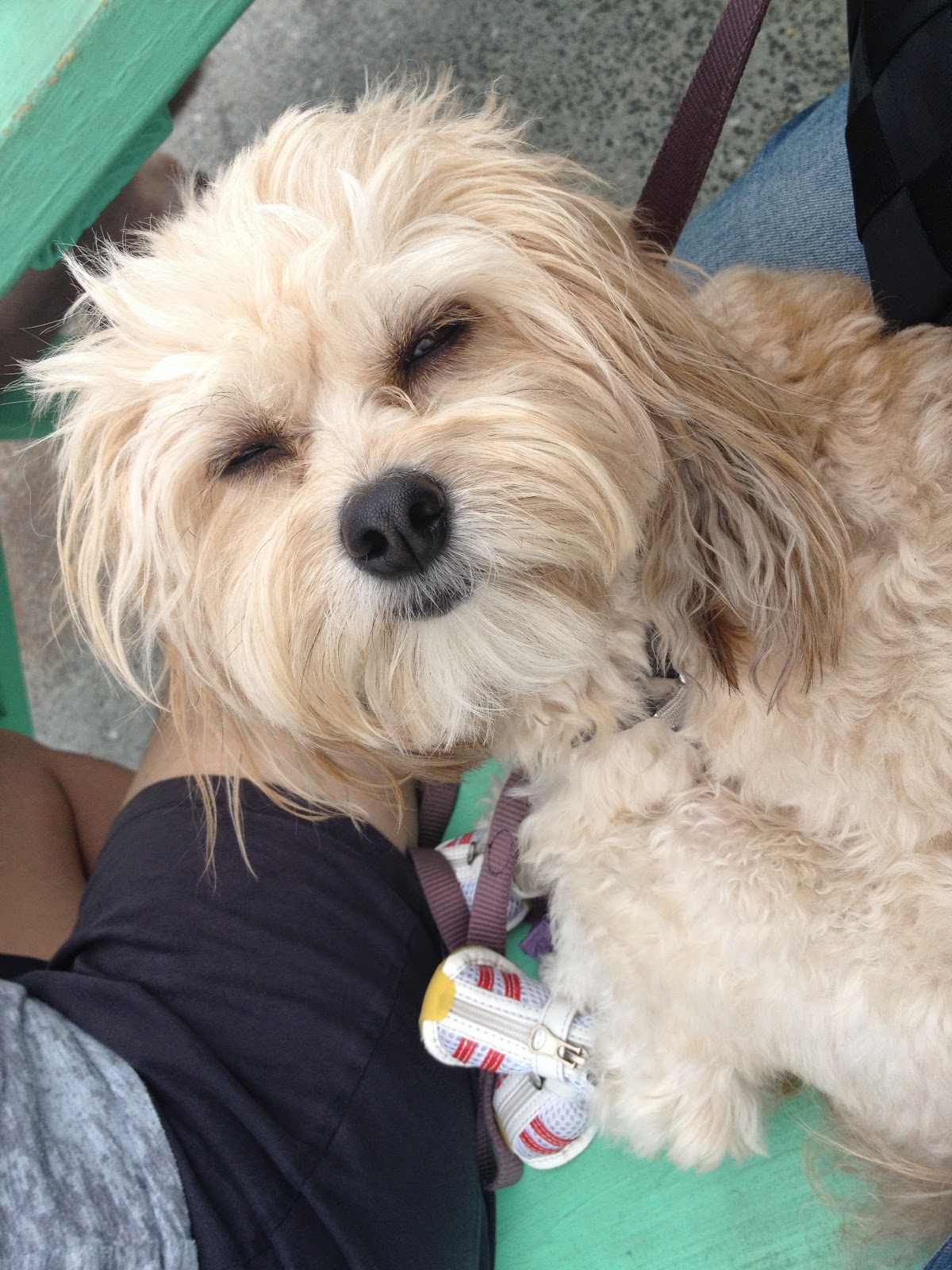 We were having a great time, but I couldn't let it go.  Although we were all full, I couldn't stop thinking about the fried oreos.  My pals had enjoyed them just the week before and I thought it was a given.  But, this week, by the time we got there, Champ's had sold out and had depleted their back stock of oreos.  WAAAAAH!  But, we could not be defeated.  All we needed was oreos and this is America; you're never far from oreos!  Kale-salad-at-the-beach easily confirmed that they did, indeed, have the batter.  So, we journeyed to the nearest bodega (a matter of blocks) and KSATB filled a bag with un-fried oreos that we then delivered to Champ's... 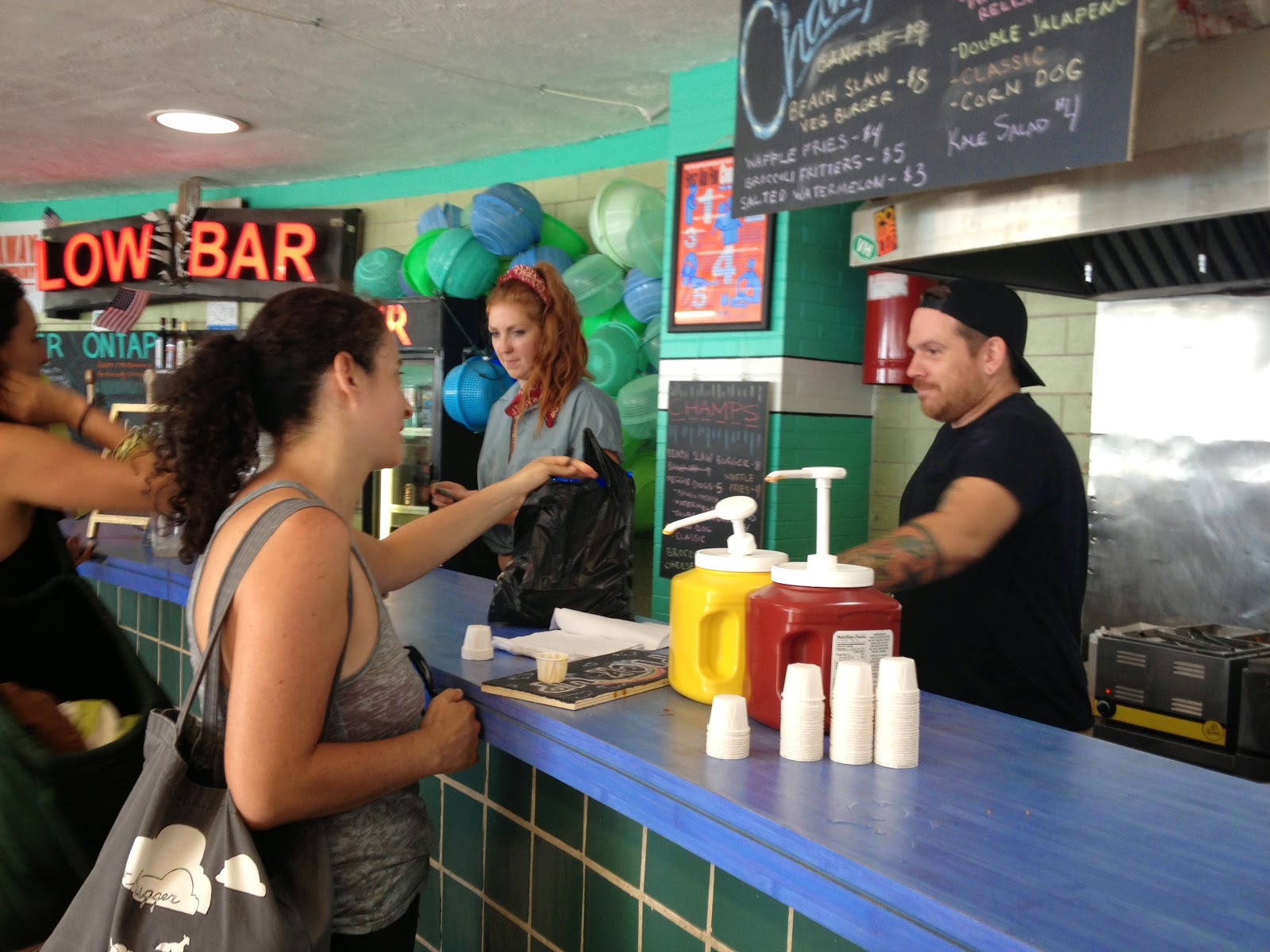 ...in exchange for fried oreos; it was a victory of epic proportions! 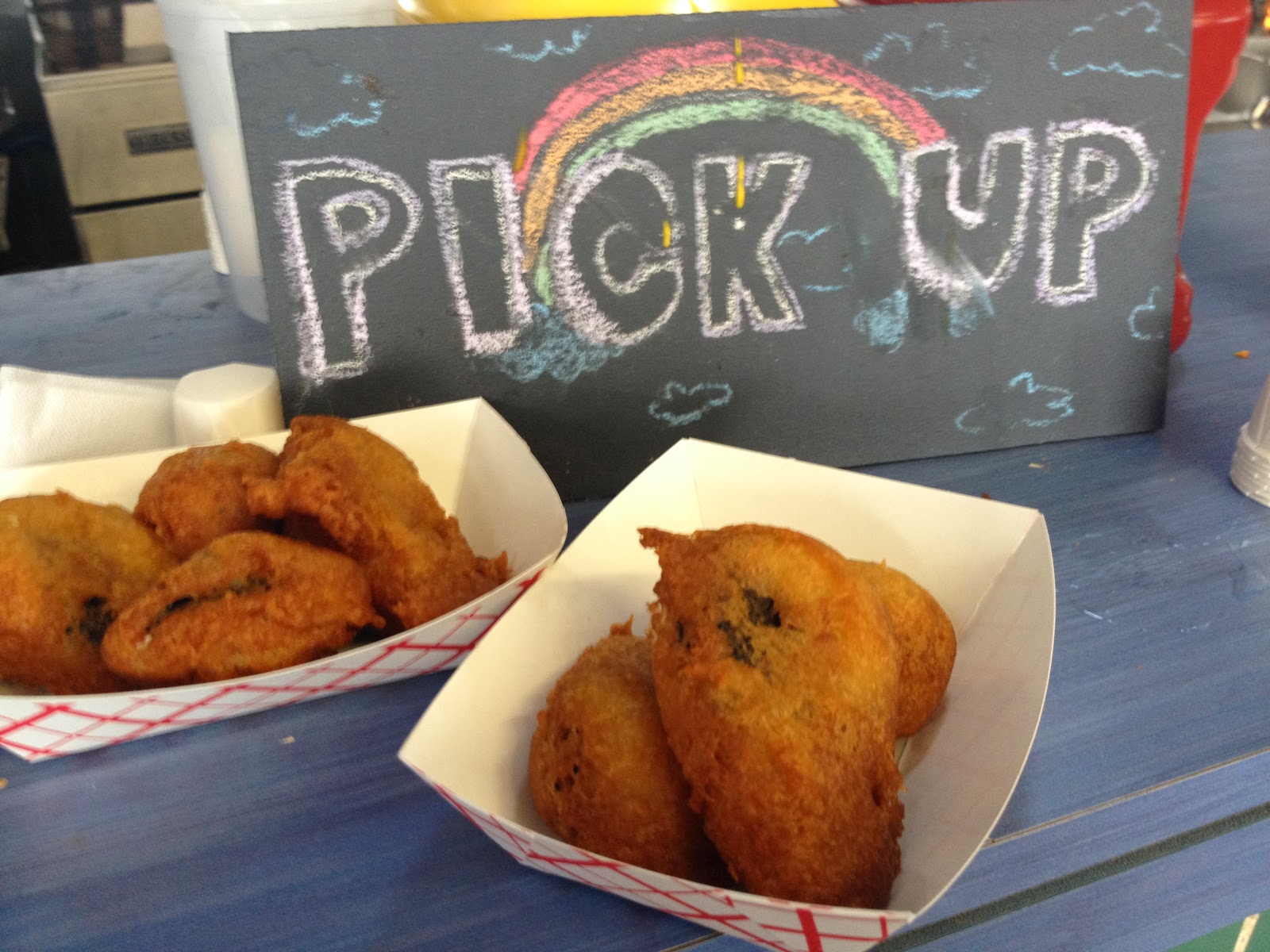 Imagine the pride we felt when "fried oreos" were added back to the chalk menu because of one girl and a dream. 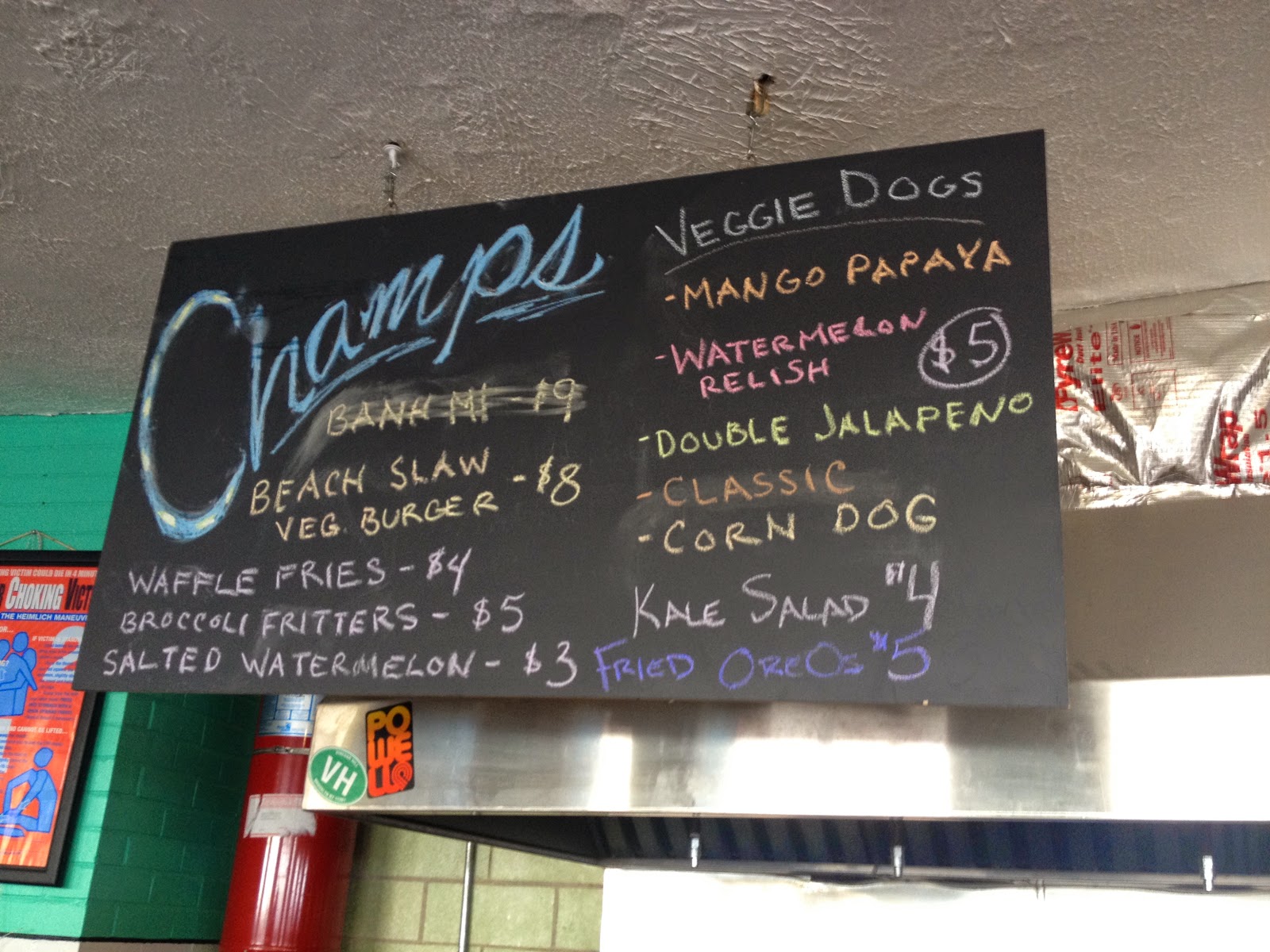 They were just as I'd remembered: imagine a funnel cake pocket... 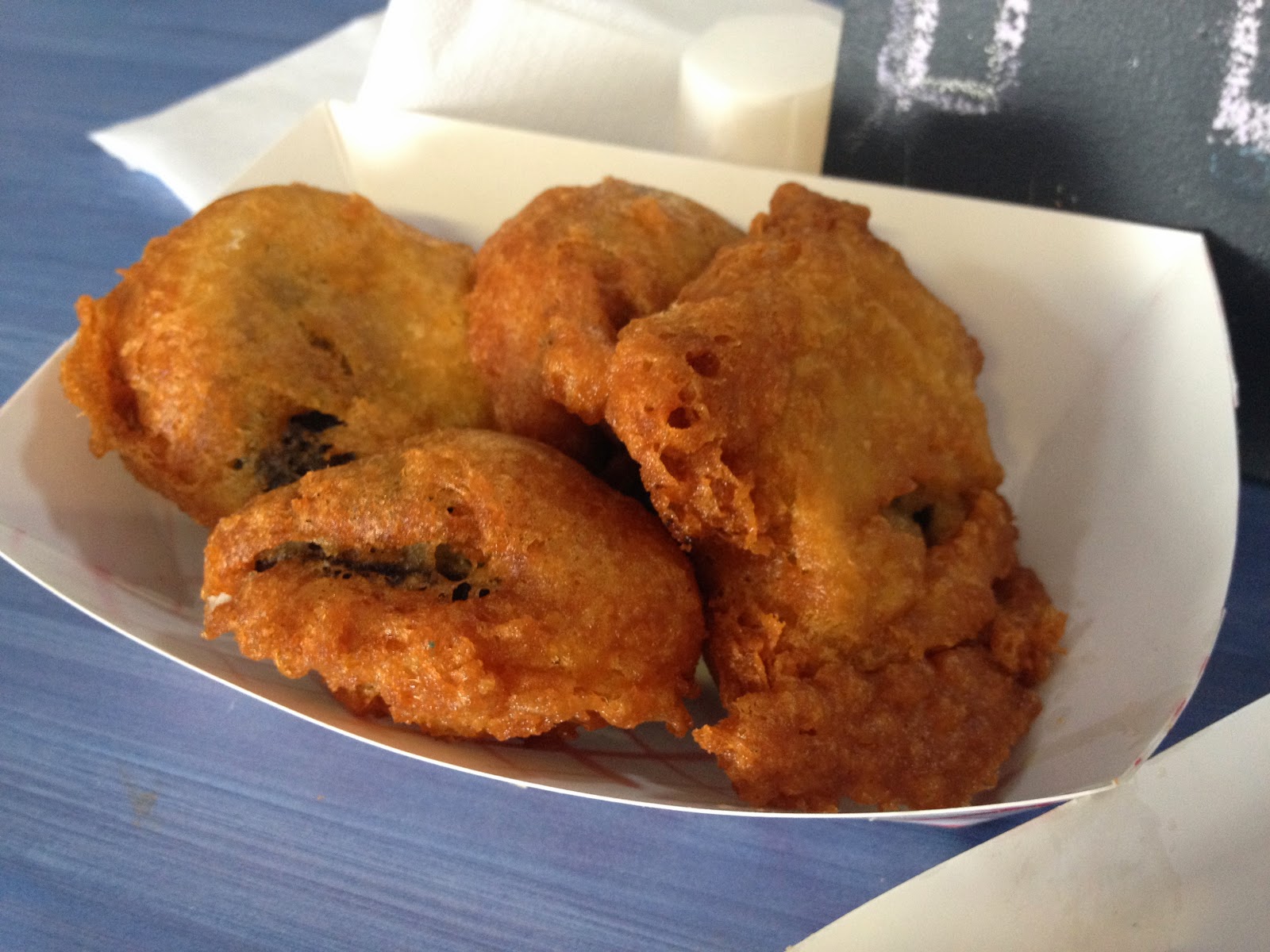 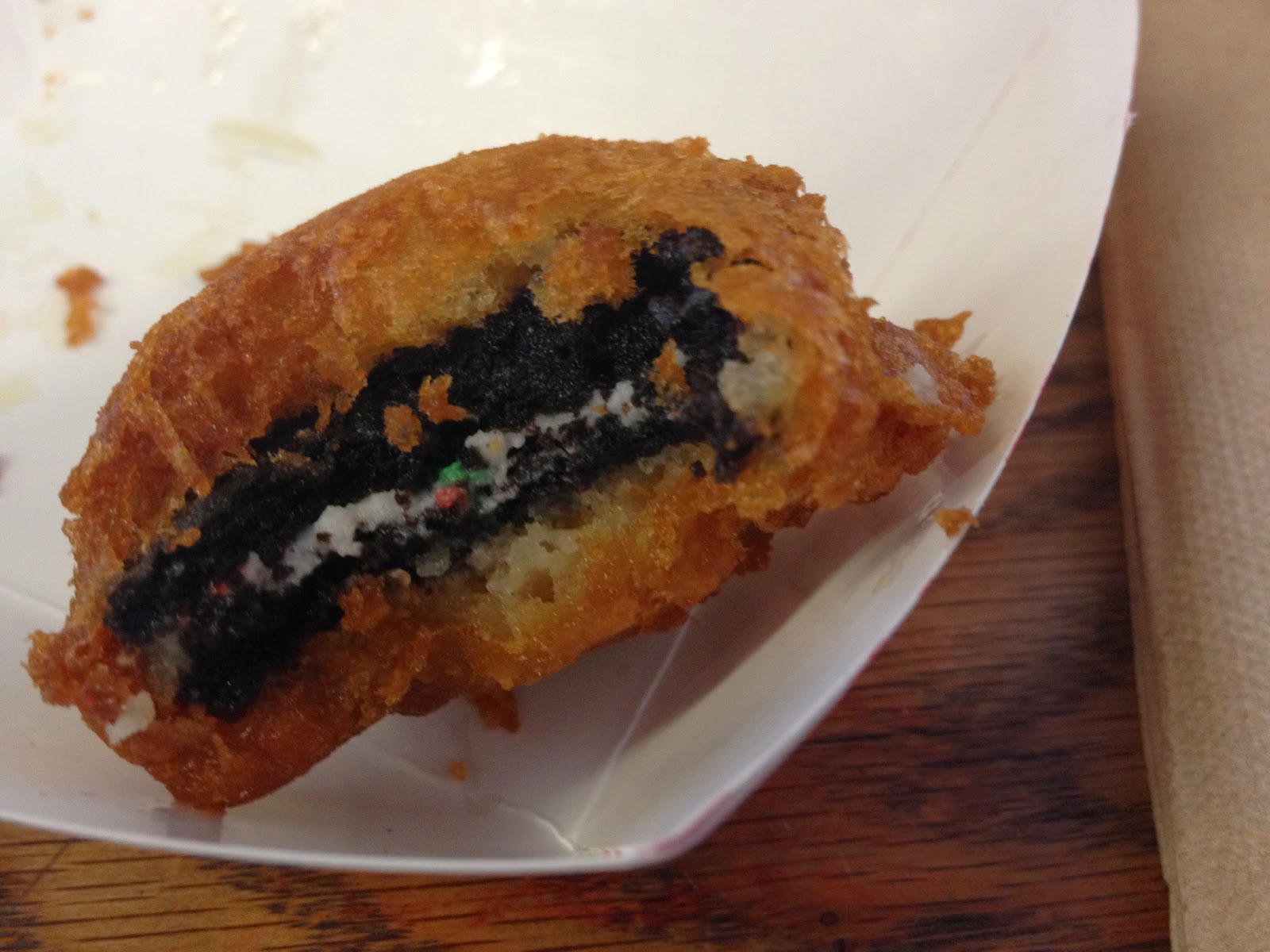 Know that if you partook of fried oreos at Rockaway Champ's a couple of weeks ago, it was probably due in no small part to my friend: none other than kale-salad-at-the-beach, who can now add this to her list of varied and impressive lifetime accomplishments.

Note: we also asked Champ's to deep fry some peanut chews for us. 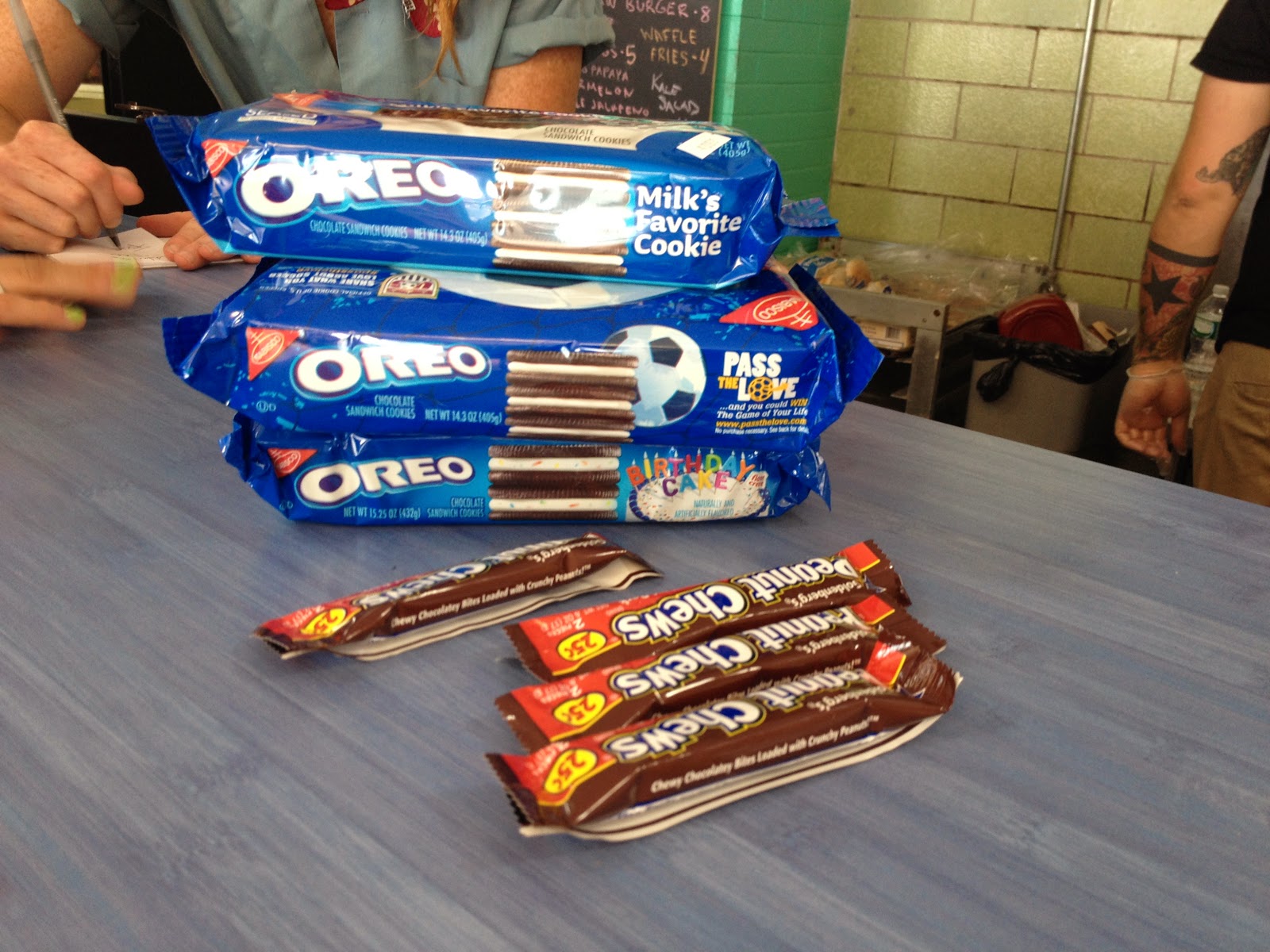 That didn't work out so well. 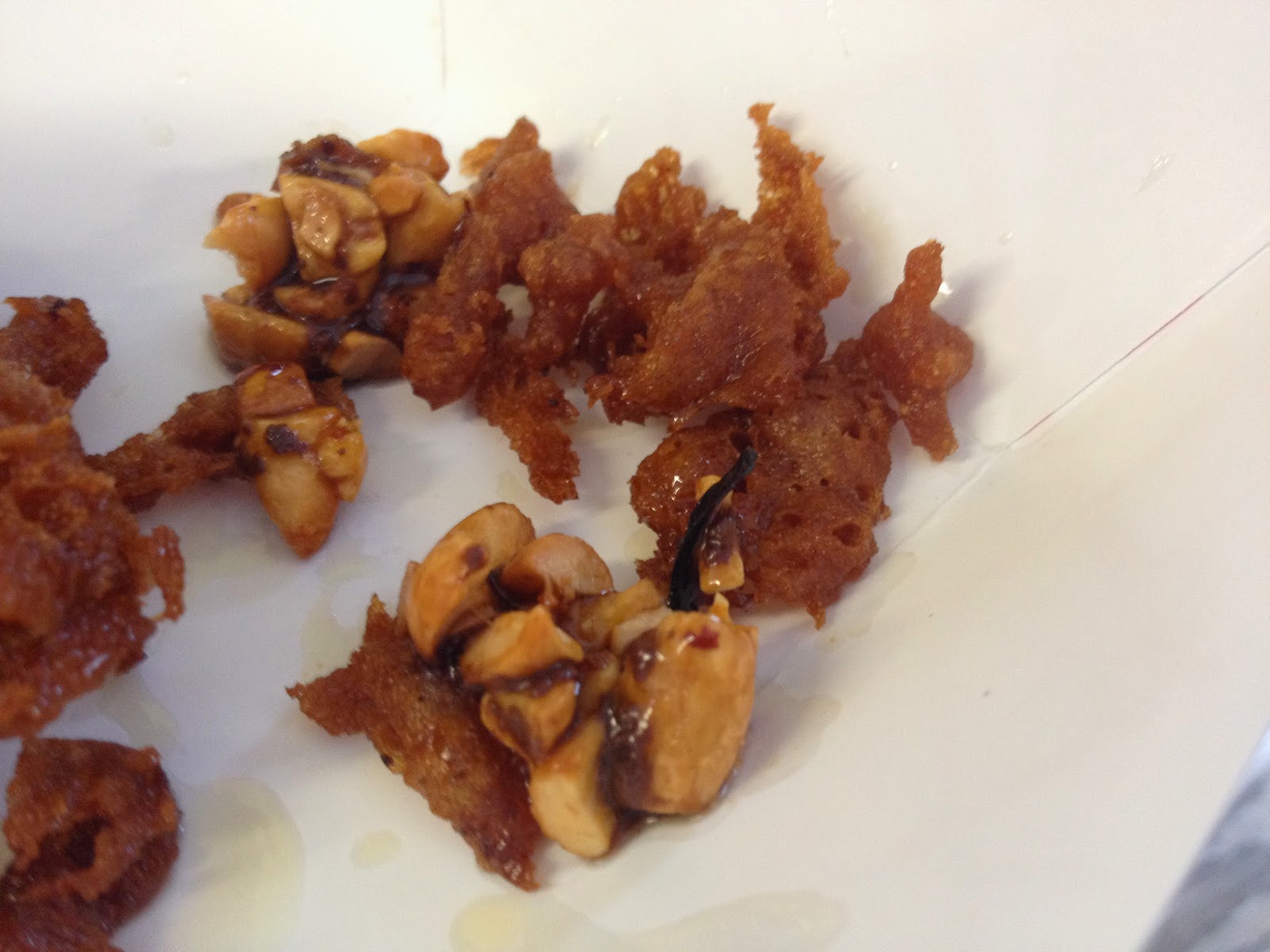 Definitely stick with the oreos, which are ironically listed under the kale salad. 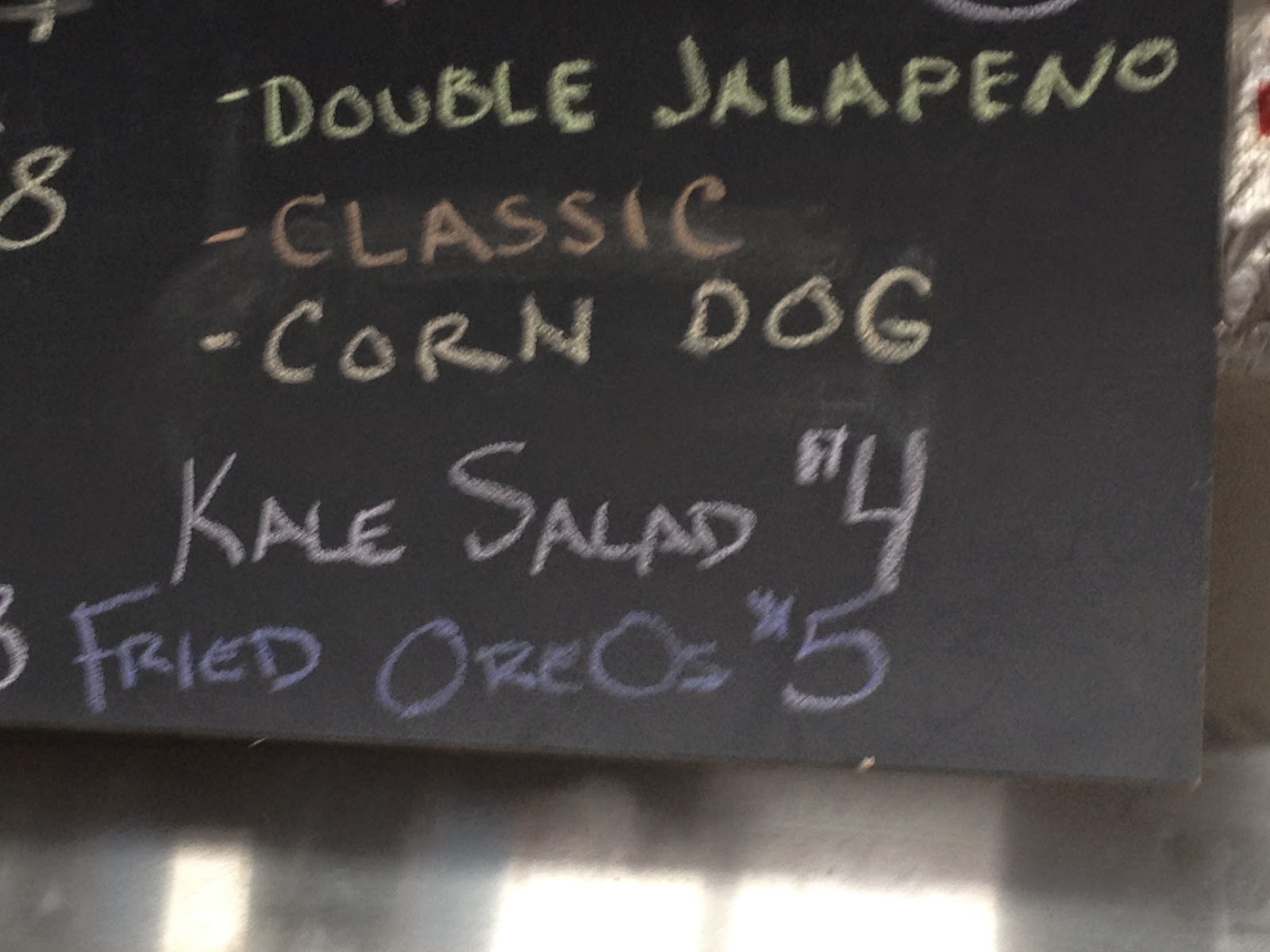 PS: while in Rockaway we also visited Fort Tilden for the MOMA PS1 "Rockaway!" exhibit. 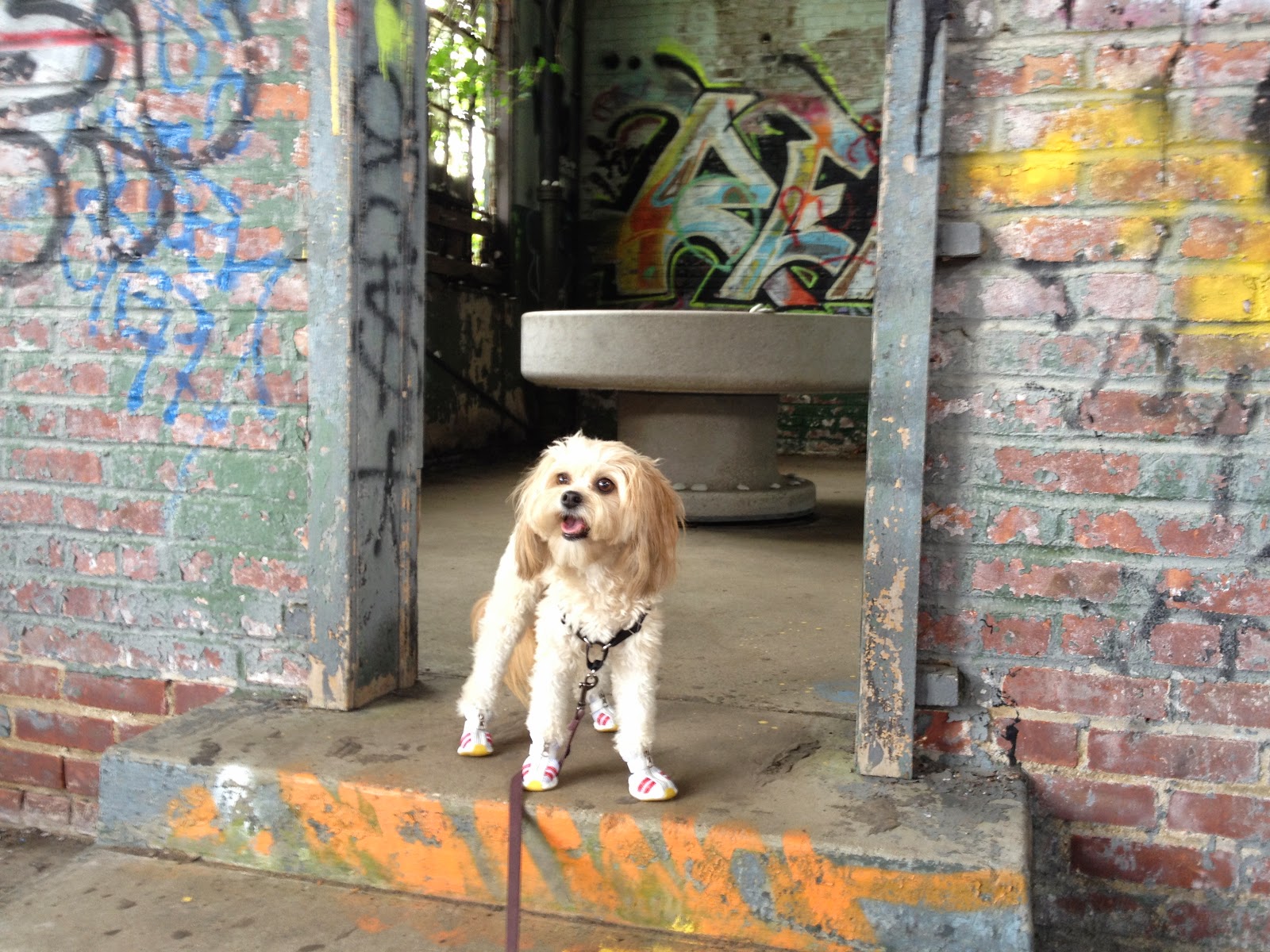 UPDATE: my content editor and host sent me the fabbest photo of 89 at the Patti Smith installation! 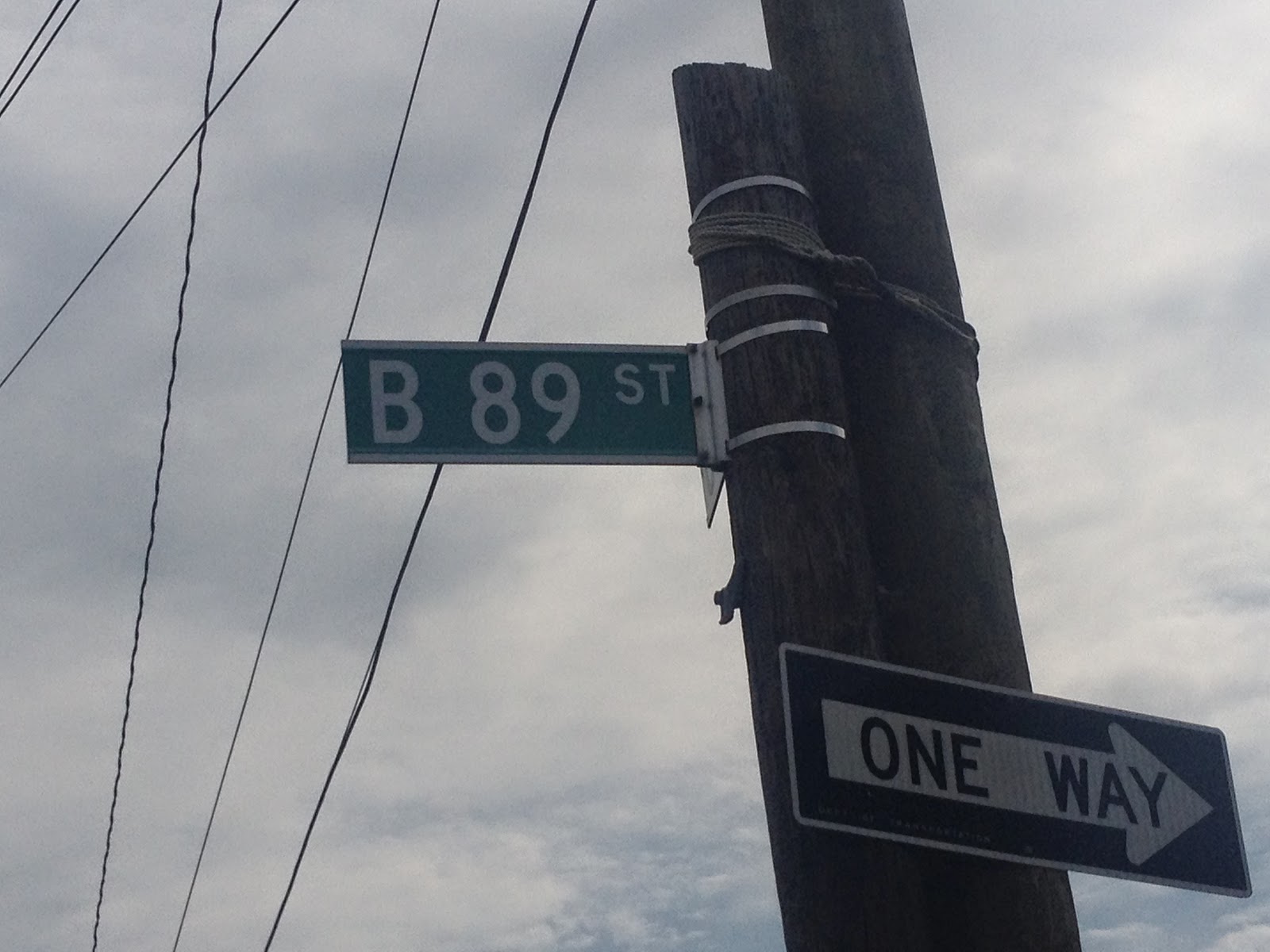 It was exhausting (did I mention 89 threw in the towel during our Ft. Tilden walk and needed to be carried?), but exhilarating and we had a great time.  Yes, all one day.


Kindly reserve your horrified comments about my having indulged in both Champ's and Rockaway Taco in the same 24 hour period; I feel guilty enough (no I don't).