Delice & Sarrasin "can be made vegan"

I've been meaning to get to Delice & Sarrasin, "a Vegan French restaurant offering a range of authentic french dishes, along with savory crepes (galettes) & sweet crepes, located in the heart of the West Village," ever since I saw the chef on a morning program talking about how their food is so authentic, "you'll never know it's vegan." It finally popped onto my radar again recently and a friend and I immediately made plans to go. When I arrived, I was happy to see the "vegan" pronouncement right outside; I knew I was in the right place. 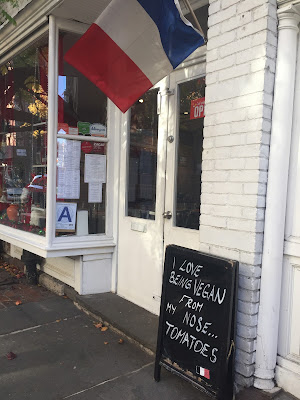 The restaurant is quaint and pretty: inside and out. 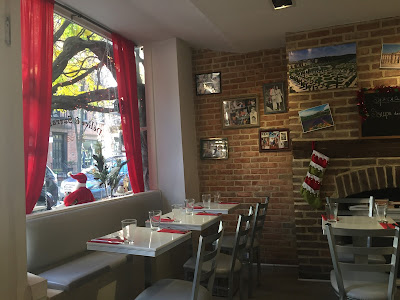 That tree is the highlight of the block (aside from the adorable "citipet" puppies heartbreakingly for sale next door). 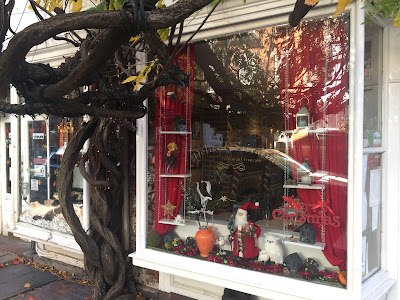 I ordered a hot chocolate and was given the option of soy, almond, or coconut milk; I chose soy. Smiling, I thought, "this is what it means to be in a vegan restaurant." But, it turned out a disappointment: it wasn't terribly hot, not very chocolatey, and, surprisingly, not at all creamy. It was served to me with a visible clump of cocoa on the surface which I hoped was from cocoa and not from a mix.

As I perused the brunch menu while waiting for my friend, I marveled at all the vegan egg/cheese/meat ingredients on the menu and tried to decide what to order. I studied all of the options and then, at some point, it occurred to me that not everything was vegan. The front of the menu, yes: clearly, all vegan. 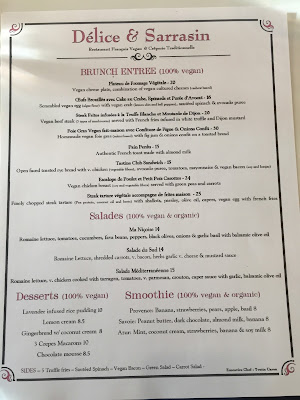 But the back? There was definitely a whole section that seemed to be real chicken eggs and cow cheese. 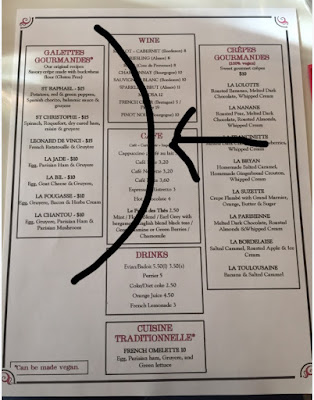 And then I saw the bottom of the menu that confirmed my suspicion. 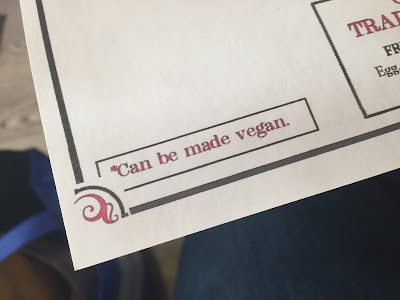 We spoke to the host/waiter/co-owner and he assured us that all of the "meat" options were vegan, and that the chicken eggs and cow cheese ingredients could be substituted with vegan versions. Since we were already in for a penny, we stayed- against the fear of having our crepes simmering on the same cooking surface as a chicken egg. I'm not a purist, but with the vegan expectation shattered I was disappointed and frustrated. Delice & Sarrasin has repeatedly been marketed as vegan- even their the header of their website states "Delice & Sarrasin is a Vegan French restaurant..." *see update below

I ordered the St Raphael from the non-vegan galettes de sarrasin section of the menu; it contained roasted potatoes, red & green peppers, Spanich chorizo, balsamic sauce & gruyere vegan cheese. I was surprised that it was served lengthwise, like a dosa, and by the unexpected deep teff-color of the crepe. Apparently sarrasin is the gluten free buckwheat flour that they use for their savory crepes and the taste is similarly tangy to traditional injera. 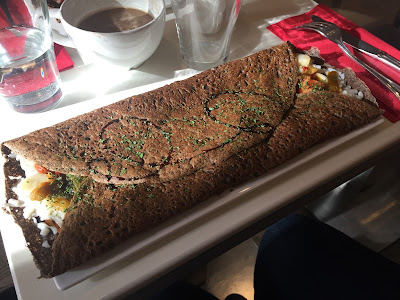 The galette was a nice change of pace and it was good, but not phenomenal- which was what I'd been hoping for. The cheese looked to be store-bought shreds and the chorizo was present in dense, tasteless half-moons that didn't hold a candle to Vegicano's incomparable homemade version. The potatoes and peppers presented the only discernible flavor aside from the crepe and minimal swirl of balsamic. 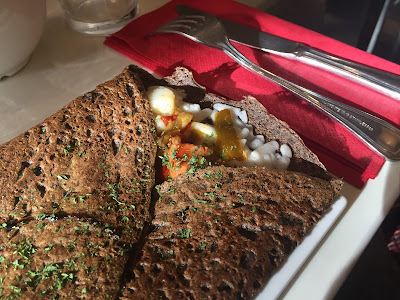 When we'd finished our crepes, we asked the host/waiter/co-owner if they had croissants. "No," he stated, "because croissants are typically made with butter." My face said blink-blink, but my mind said, ARE YOU KIDDING ME? I mean, yes; I'm aware that croissants are typically made with butter, but, were we not sitting in a purportedly vegan French restaurant? And they couldn't crack the code of a vegan croissant? It was time to go.

I decided to let the experience simmer a while before posting, but then, as if by fate, a friend posted a very recent Epoch Times write-up, titled, "At Delice & Sarrasin, French Classics Go Vegan," which I find totally misleading. Worse, though, is that in the article, they describe the whole family behind the restaurant as vegan. So, my question is this: if the "whole family is vegan, motivated by a concern for the welfare of animals as well as for their personal health," then why are dairy and eggs on the menu?

I get it. I should be impressed that there's a French restaurant that has so very many vegan options. The problem is, they're still a vegetarian restaurant with vegan options. I'm not splitting hairs here, just standing up for what has become the norm: watering down the definition of veganism and, more alarmingly, a post-fact society.

UPDATE: hours after I posted this review here and on social media, after a "conversation" on my IG post, Delice & Sarrasin has updated their listing to "vegetarian/vegan," but as of 1/18/2017, their website still states that they are 100% vegan. 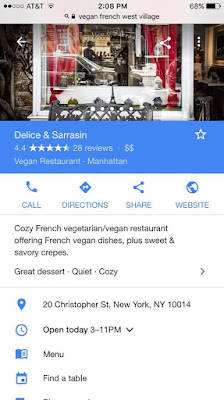 According to their comments, they are striving towards a 100% vegan restaurant, so let's hope that the change is only necessary for a short time. 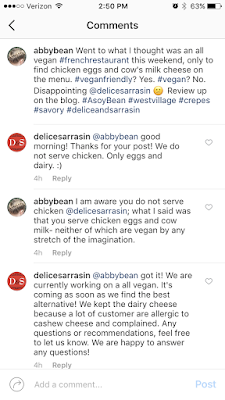 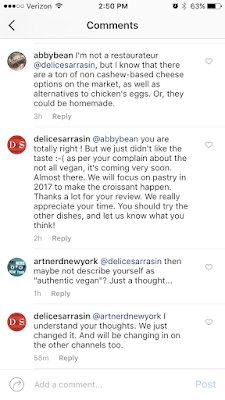 UPDATE 12/8/16: The restaurant kindly reached out with this explanation. It seems that, although I didn't see this information on the website or in any advertisement/articles, the owners/chef went vegan relatively recently and are in the process of veganizing the restaurant in its entirety. It would seem that they and, purportedly those covering the story, got a little excited about vegan French food and jumped the gun with their "vegan" proclamations, but their intentions seem noble. From them:

Thank you for your article!
If you would not mind, I would like to explain a few points

There is probably a lack of communication from our part, but our reasons are hard to describe in one line.

We opened 2 and half years ago, starting importing lots of ingredient (the galette's flour, you've tried, typical from france for example). We never advertised ourself as vegan or vegetarian until September 6th, 2016 (so 3 months ago!), although 95% of the menu was and is vegan.

We had a few reasons :

- First, our main goal was to attract lots of meat-eater and prove them that eating vegan is actually tasteful, and not flavorless. The "restaurant" part would then not say any word about the "foie gras" or "boeuf bourguignon" to name a few, being vegan. And guess what ? Almost no one noticed that it was vegan. We were really really happy. Converting meat-eater is the hardest thing. We did this also for us to grow slowly and keep nice production/quality

- Then, we opened the biggest vegan/vegetarian group, at the french embassy in New York, and introducing people to a better lifestyle. We opened along with the restaurant, a creperie inside the restaurant. We managed to extend the kitchen. Creperies are very popular in France, it is very cultural, something you would have for lunch and dinner, with your family etc etc.. It was the best way to attract French and meat-eaters to try vegetarian food and start introducing them to it. Unfortunately, almost no french people willing to try to be vegan would like the "vegan galette (savory crepe)". Stubborn, I know. You know French people... After several talks between each other, we were thinking : what is better : 1 vegetarian or 1 carnivore? The answer for us were pretty obvious. So we introduced the galette with dairy cheese and egg. You have no idea how this changed their mind. They were willing to stop eating meat and fish, have vegan sausage,vegan bacon, and everything else. But this. Again, I am talking about the french community.

Of course, as you said, it is disappointing,for us also. But France is the less vegan friendly country in Europe, and believe me, it was a big step.

Then this question came : How do we get dairy cheese in the most vegan way ?
The French embassy and the main diplomat helped us a lot regarding this question. We started to reach to small dairy farm that was about to shut down (within the US and Canada) and we contacted them. They helped us saving the cheese they were about to throw away, and we froze the cheese in a health's department approved facility in Brooklyn.

You are the first one bringing that point out on social media, and I appreciate it. We told this exact story to ABC and they did not give those details, which was, for us, the most important part. Unfortunately, we contacted the press but no one brought it up.. There is definitely a lack of communication from us, but we can't force the press

To answer your doubts also, the entire restaurant part is 100% vegan. The creperie part, is 50% vegan (the sweet crepes are 100% vegan) , the galette (savory crepes) are vegetarian.
However, be sure that we are working on it.

Thanks a lot, and talk soon