Just last week I found myself extraordinarily behind- on my cards, my wrapping, my tree: just genuinely feeling overwhelmed by what I had to accomplish before the holidays. Then last Tuesday (that felt like it should be Friday already), I packed up all of mine and 89's winter paraphernalia and was trudging out to the car for work when I noticed there was a bag placed atop the car roof- right outside my door. Someone had left me 2 vegan cupcakes! I was so excited. 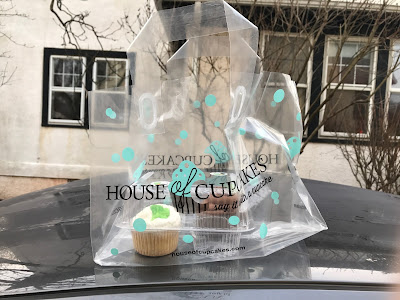 I took a pic of the find, as ya do, giddily got into the car, and almost left the cupcakes there when I drove off because I was that elated. It didn't take me long to realize who had put them there- my extremely kind neighbor who keeps me sane when those that are vastly inconsiderate get me down. "Santa comes in all shapes and sizes," she told me, when I thanked her. 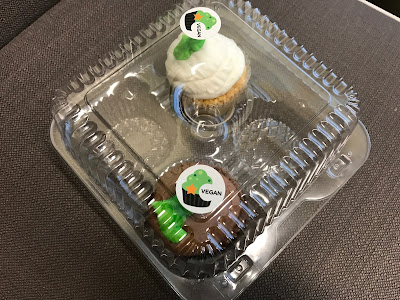 So, it was basically the sweetest- literally, and I happily ate them for breakfast (yes, both; I couldn't decide). 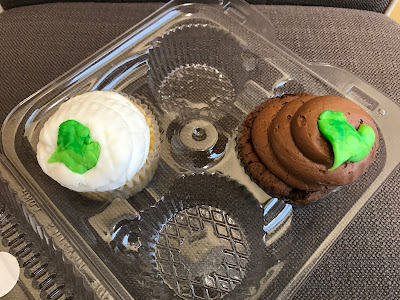 Two days later, while walking through the lounge area of my building, we passed a woman who made an indiscernible exclamation of glee when she spotted 89. We went over to say hello and she pointed out that she and I both had the same phone case. As she pet 89, she told me that she was headed home to London for the holidays and was hoping not to drop her phone again (I hear that) because the case was already cracked and she didn't want her phone to break. I told her to wait a minute. I went back to my office and returned with a brand new case- the same as we each had. I explained to her that I always keep a spare because I too am always dropping my phone. I'd just put a brand new one on, so I was assuming mine had more life left in it than hers. She was so grateful and asked if she could repay me in cupcakes; I knew I liked her! I weighed my options. I knew I could just tell her it was unnecessary and move on, but there was a very real likelihood she'd appear with non-vegan cupcakes that I wouldn't be able to eat. So I said, "It's not necessary to repay me. Also, I'm vegan." I waited breathlessly to see how it would land.

She looked at me incredulously and said, "I've been trying to go vegan! I've been vegetarian for 2 years." She asked me what I eat for breakfast, of all things, because she was afraid of becoming anemic without omelettes. "Eggs are the hardest," she said, "how did you give them up?" I spared her the early truth, which is that they've always grossed me out (I tirelessly asked VM what an egg actually was and she wouldn't tell me), and told her the later truth- which was that when I discovered undercover PETA video of an egg farm, suddenly all of the cries of "vegetarianism is just as bad" made sense.

I asked her if she'd ever visited an animal sanctuary and she said she hadn't. She told me she had a dog that she loved. I explained that animals that are largely considered food are just as sociable as those we consider pets. Once again I told her to wait while I returned to my office. This time I gave her my copy of Beg by Rory Freedman. I've had it in my office for two years in the hopes that people would peruse it at their leisure, but no one ever has. She seemed like the perfect recipient. Again she looked at me as though she needed to reciprocate and I told her to just pass it on when she was done with it, to someone who she felt needed it. 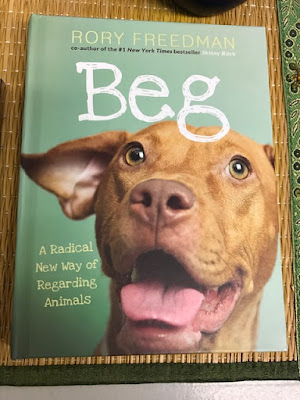 I left for a meeting and came back to find her still there. She'd made a considerable dent in the book and looked up at me, teary-eyed. "We bought our dog," she said. I instantly felt terrible and told her it wasn't about judgment, it was about evolution. Then I did the only thing I could think of that would make her feel a little better as she continued to read: I returned to my office one last time and came back with a Gone Pie brownie for her. Yeah, that's how vegan I am: I've got stacks of books and brownies to share at a moment's notice!

If you're like me, you had a bunch of people on your card and gift lift this holiday season. These impromptu random acts of kindness, although they can't be planned, should be on your list of things to do too- all year long. And, while it doesn't have to be holiday-specific, here's a great story about being a Santa yourself. 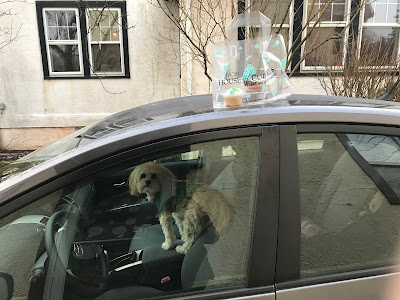