Oops, I did it again: Modern Love Brooklyn

Ok, so I went to Modern Love Brooklyn a short while ago amid the flurry of excitement surrounding it's grand opening; check it out over at Vegansaurus. But then I returned recently and everything had been kicked up a notch with purple, twinkly lights, which made everything infinitely better (and brighter!). 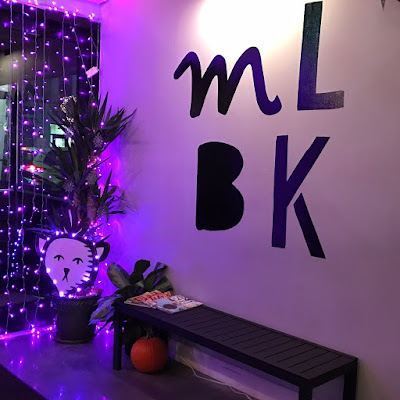 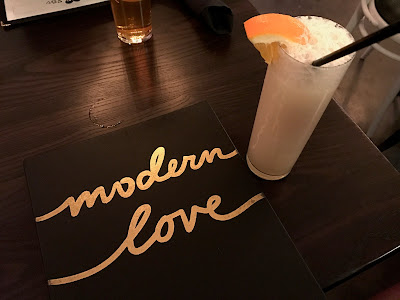 Even though my friend already recreated them for me AND I have Isa's new Superfun Times Vegan Holiday Cookbook so I could theoretically make them myself, I had to order the deviled potatoes with roasted yukons, creamy potato filling, arugula, paprika, dill. I maintain that letting other people make them for me is a good strategy. 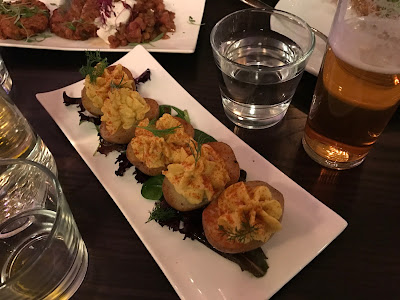 We also repeat ordered the zaatar pretzels with baba ganoush, chili oil, preserved lemon, sumac. I'm more of a salted pretzel with spicy mustard type of person but it was a hit at the table. 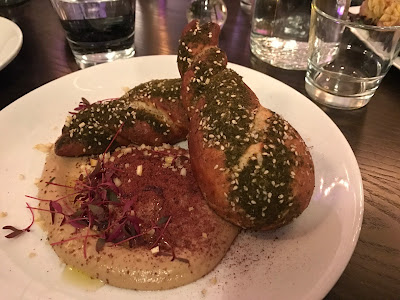 At the last minute we added the samosa spiced latkes with pear chutney, coconut sour cream, and micro cilantro (ugh) to the order and were glad that we did. While the raisin-laden chutney went largely untouched, the sour cream and the latkes themselves were really great. 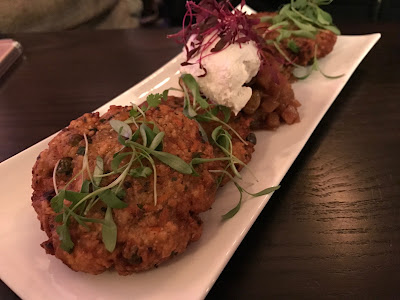 I'd pre-chosen my entree from the online menu, only to find that it was no longer being offered. I managed to maintain my composure and, instead, painstakingly chose the maple bourbon bbq tempeh with collard greens, black eyed peas, frazzled onions, and corn pudding. No, I didn't have any idea what corn pudding was, but it turned out to be what I would describe as a creamed corn fritter- in other words, divine. This artfully plated dish was rich to the nth degree, but I've no regrets. 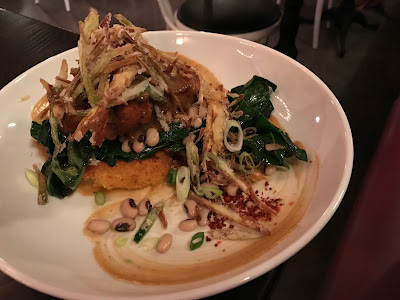 And that's where our meal ended. Yup, no dessert. Why? The blame falls squarely on the shoulders of my "friends," who- unlike me, were willing to let their fullness from the meal prevent them from continuing to gorge. Truth be told, even I was full well into the following day, but I still would have squeezed in dessert on principle if I hadn't been out-voted four to one. Guess I'll have to go back...
Posted by Abby Bean at 10:01 AM