Non-vegans always ask me what vegans eat for Thanksgiving. My answer? SO, SO MUCH! 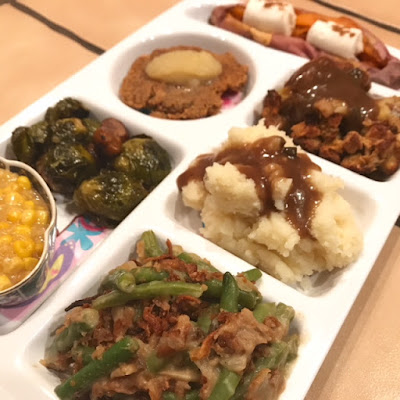 First let me give a shout-out to the best-dressed pooch at the holiday dinner: 89, who now has her own insta!! She's wearing a silver hoodie from Dog & Co, adorned with a Compassion Co. pin (gifted from Gone Pie) that says, "Give thanks for all life." 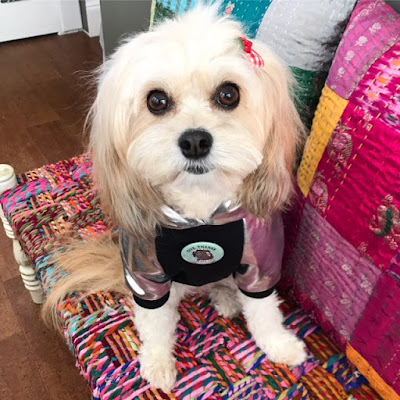 Since my family has the veganized Thanksgiving meal down to a science, I'll give you the complete breakdown for your records. But, first: let me note one important factoid... moments before we were about to sit down to dinner, I found this in my parents' kitchen cabinet. 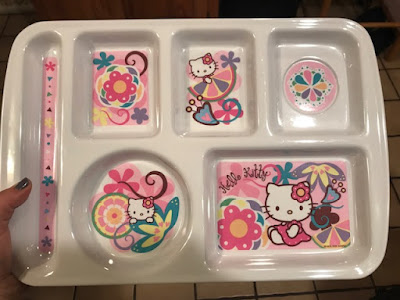 Looks weird, right? A little too tropical for a fall holiday? Well, how about full of vegan, cruelty-free, Thanksgiving goodness? 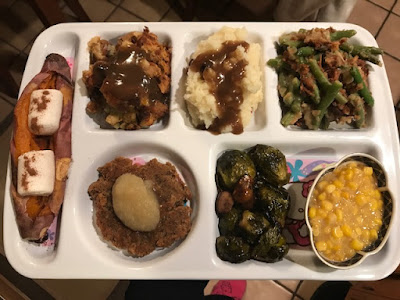 I know; it's hard to believe you ever ate your Thanksgiving meal any other way. It's THE perfect plate- even if it could have used one extra compartment.

So, let's break it down, shall we? In no particular order:

PPK chickpea cutlets- I know it's not called Post-Punk Kitchen anymore, but that's what it says on my printout from eons ago, and that's what it's gonna stay to me. I miss VM's breaded chicken cutlets with applesauce and this is a superior substitute! Make no mistake; you definitely want to use the double batch recipe (I've actually been known to quadruple batch). The double batch makes 8 and they're never as large as Isa recommends stretching them to. You'll want one every day you're eating those leftovers, with a few left over to eat in sammies. 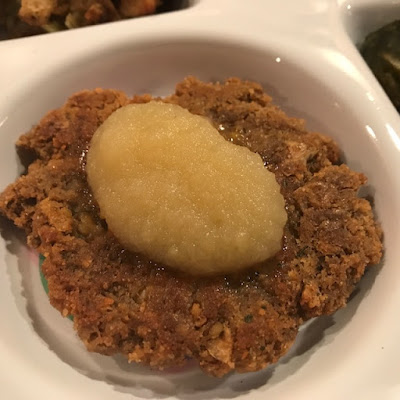 VM's sweet corn stuffing: my mom has been using this recipe forever; she sometimes makes them as stuffing "balls" in cupcake trays and asks guests if they want gravy on their balls. That embarrassing anecdote notwithstanding, it's the best stuffing I've ever had and don't try to tell me otherwise. 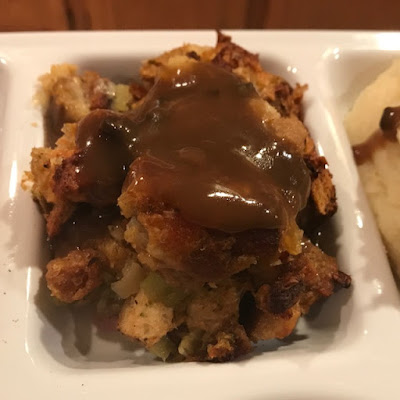 VM's horseradish mashed potatoes: So, VM is one of those Italian cooks that doesn't read recipes or ever write anything down. She can't explain how to make 99.9% of her amazing dishes, but it's easier if she makes it for me anyway, so I ain't mad. I've watched her mash these suckers and eyeball the butter, almond milk, and horseradish proportions. I couldn't replicate it, but hers comes out amazing every time. 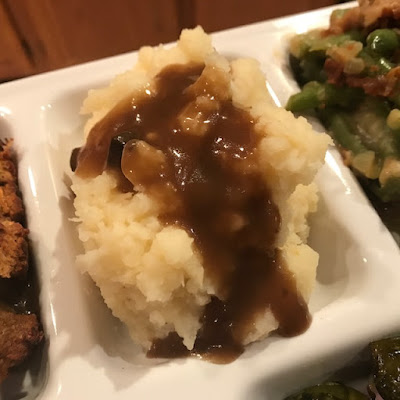 Isa's green bean casserole: I don't know when the green bean casserole was invented, but I do know that I can't quit it. If you've never had it, YOU ARE MISSING OUT! I am not in the habit of tweaking recipes, but I've made this so often that I've had the chance to perfect it to the tastebuds of my audience & that means the following: 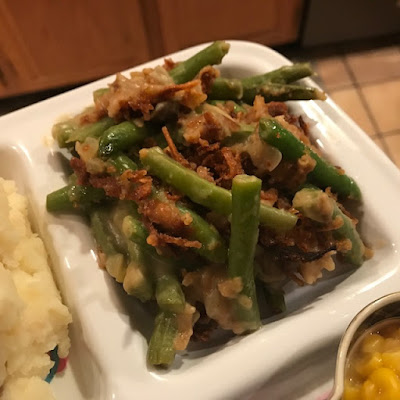 Chloe Coscarelli's Brussel's sprouts: You might not think you need a recipe to roast Brussel Sprouts, but you'd be wrong. We sub chestnuts for hazelnuts and use swanky maple syrup, but neither are deal-breakers. Okay, deep breath. I'm not going to lie to you. VM burned the sprouts. Worse, she burned them last year as well. They were so glorious and then she forgot about them like they're not the most important part of the meal. It was a heartbreak (X2). 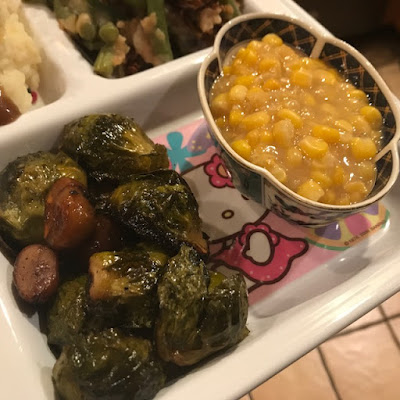 Baked sweet potatoes with marshmallows & cinnamon: This one isn't really tough to figure out. VM picks the long, skinny sweet potatoes because we like them like that (and, they also fit in the chopstick section of my tray that way). When they're hot, I stuff 'em with vegan marshies: minis are better, but I had these giant ones left from the summer when we never got around to making s'mores at a pool party. Sprinkle with cinnamon & voila! Note about the marshie's: I've been buying the Trader Joe's ones and they're pretty fab and extremely reasonably priced. 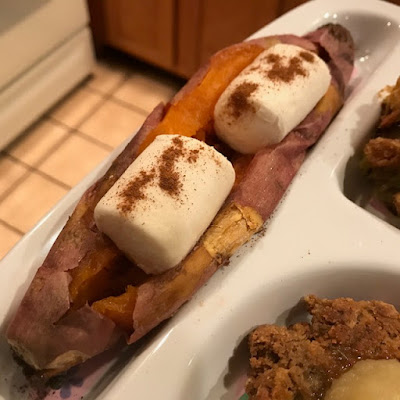 And, in case you were wondering, 89 got her own plate of goodness as well: 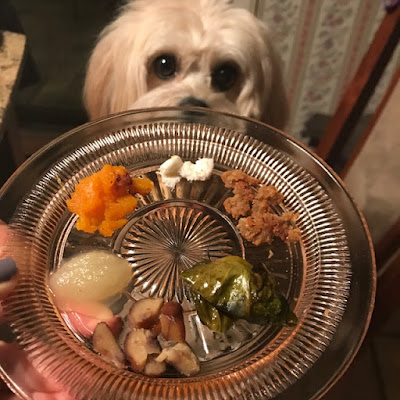 I am totally embarrassed to report that we had no room in our tummies to consume dessert on Thanksgiving night. So, we reconvened the next day for a repeat performance of dinner with leftovers:


And we all saved plenty of room for this smorgasboard of Vegan Treats. 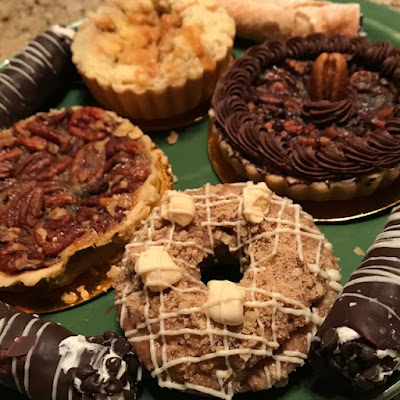 Dessert breakdown: VM & OD couldn't remember what this one was (they made the trip and chose everything), but I thought it was a pumpkin streusel donut with pumpkin Dandies, which 89 promptly ate. Top right: chocolate pecan pie, which was really delicious and FULL of pecans. Bottom left: traditional pecan pie, which for some reason I liked even better than the chocolate version. Bottom right: apple crumble pie, which I tasted to be polite and reminded myself that apples are only appropriate in sauce. Also cannolis and chocolate-covered cannolis. We'd also shared a pecan bun that morning. And I'd eaten VT pumpkin cheesecake softserve the night before. But. that's it (there may have also been cowboy cookies and jelly donuts). 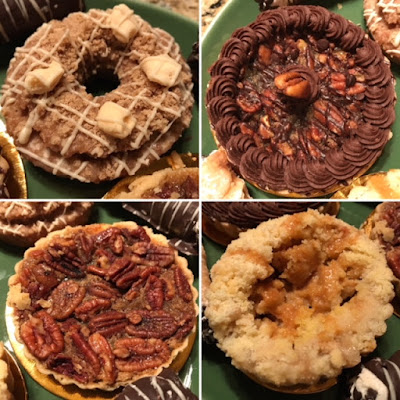 89 got dessert as well, in the form of a pumpkin pie toy from Barkbox. This was her really excited about it. 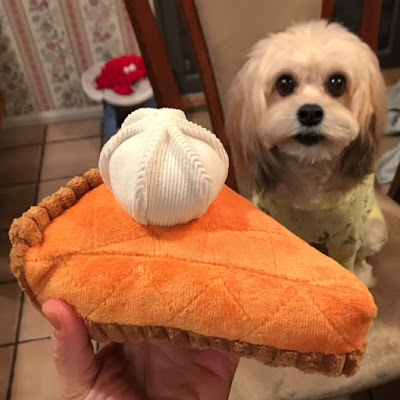 And then this was her when she realized it wasn't really edible (but damn if those Barkbox toys aren't sturdy; it's still 100% intact). 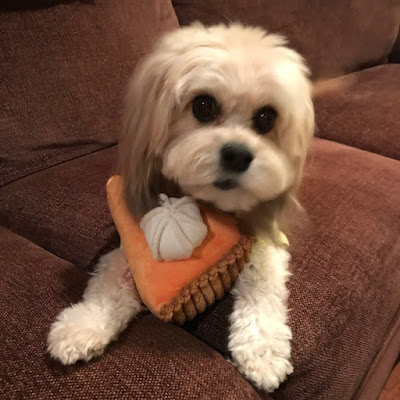 Lest I forget to mention... per usual, we watched the Macy's Thanksgiving Day parade on TV. This was my fave balloon this year: Grinch and Max! 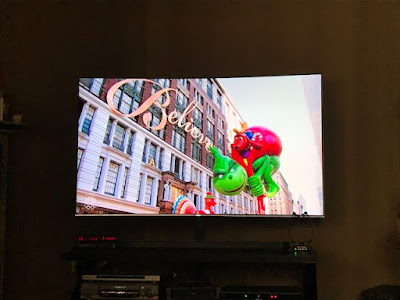 One more autumnal snack to brag about before the next post, which is going to be about something else FAB-U-LOUS I ate on Thanksgiving!

This Parker's maple cotton candy is maybe the best cotton candy I've ever had- especially since I already love both cotton candy AND maple syrup. I got mine at Orchard Grocer! and they still have some left as of this weekend (you're welcome). I can't promise anything after I go again to refill my supply... 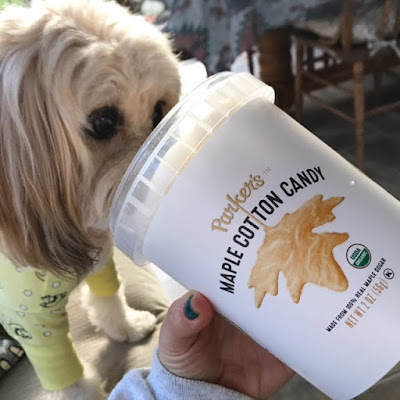 Hope your Thanksgiving was a good one and that you're ready for the holiday onslaught! In the meantime, 89 is waiting for more leftovers... 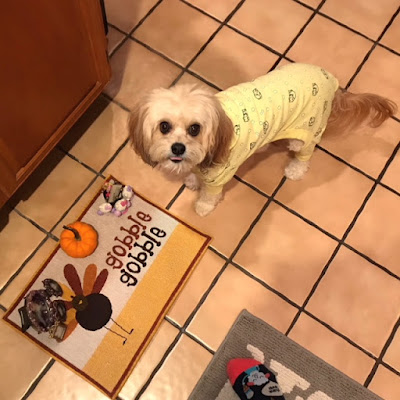