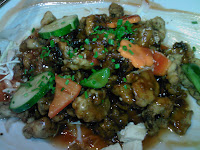 I hadn't been to Hangawi in years, and I convinced myself that I was going to be adventurous and not order my old favorite: the bean curd with spicy kimchi. I didn't, but for the record- it is SO GOOD: exquisite spicy kimchi and tofu that practically melts in your mouth.
Hangawi was exactly as I remember it: serene and other-worldly. They were even out of the sweet corn and spinach porridge which I've never had the opportunity to taste...because they are mysteriously always out of it. Not merely deja-vu, I suspect it doesn't actually exist and they simply haven't gotten around to reprinting the menus. No matter, instead I enjoyed the smooth, sweet, pudding-like pumpkin porridge.
I did manage to prevent myself from ordering my "regular" and I was not disappointed. The food was possibly more fantastic than I remembered. The combo pancakes were each unique and divine. One leek, one kabocha pumpkin, and one spicy kimchi mushroom: they were like Asian-inspired latkes and it was hard to pick a favorite. The vegetable dumplings were huge and delicious, although we were surprised that both appetizers came with the same dipping sauce.
The vegetarian stone bowl rice came out sizzling and was finalized tableside with chili paste. The cauldron in which it is served keeps the contents practically cooking while you eat, and the crispy rice kernels around the edges and bottom are the best. I should note that it was also served with a generous bowl of the best miso soup I've ever had. Next time I'd like to try the avocado stone bowl, but I will be sure to add the chili paste!
The unexpected standout of the day was the last minute choice of the crispy mushrooms in sweet and sour sauce (pictured). Besides the simple fact that every aspect of the generous portion was just completely yummy, it was also (oddly) the closest thing I've had to Asian sesame chicken. Don't get me wrong; it didn't taste chickeny and they certainly aren't trying to duplicate the meat dish. The melange of flavors and textures simply evoked sesame chicken to me, so I think it would make a great dish for omnis.
As always, best (and complimentary) kimchi ever: especially the spicy.
I've always had very pleasant service at Hangawi, but I've heard a lot of people complain that they don't fill your water glass often enough (!). To those people I suggest that you solve that problem by treating yourself to the takara plum wine if you like sweet and the soju mojito if you like tart. The wine smells and tastes fruity and delicious; the mojito is crisp and refreshing.
We were so full that we chose not to stuff ourselves with dessert just for the sake of dessert. Ok, my companion made the call and I begrudgingly complied, already plotting to pick up some kettle corn from the Bryant Park Holiday Market (which I did). But from past experience I would recommend the mochi (make sure they have the ones rolled in coconut because otherwise they will look naked), cheesecake, blueberry coconut cake, or ice cream.
Yes, Hangawi is a little pricey. But, you are paying for an entire experience and it's worth it.
(My one complaint is that when we entered, a rather curt & abrupt woman began repeatedly yelling directions at us in regard to where we should put our shoes. Note to this high-strung woman: We see the cubbies (it's not rocket science); you're ruining the atmosphere and practically chasing people away!)
Posted by Abby Bean at 8:41 AM