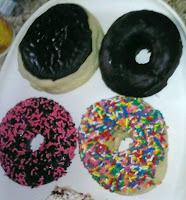 As a follow-up to my last couple of posts on west-coast only donuts (Voodoo & Mighty O) I feel compelled to give a grateful nod to my tried and true east coast favorites. That and I'm also thinking about donuts now.
When I first went vegan I was excited by those Nutrilicious donuts you could buy online or, if you were lucky, at select Whole Foods. Let's face it, they are delicious and come in quite a few flavors, but I find them pricey considering I can pretty much fit the contents of an entire box of the munchkins in my mouth at one time, squirrel style. Also, I often found that when I ordered them online they seemed to get a little sweaty in their packaging in transit, causing some soggification. To make matters worse, my Whole Foods had the habit of stacking them next to the sunniest window in the store, considerably accelerating the expiration date.
And then I discovered Vegan Treats donuts (cue harpsichords). First I tried the "plain" glazed with rainbow sprinkles. What, what!? A true donut! Next up was the Boston Creme. I admit it, I was afraid; this is a tough recipe to duplicate vegan-style. I love, love, loved Boston Cremes as a kid. (That is, until "the incident", circa pre-vegan ASB eating a BC from a major chain: There I was, mindlessly chewing away at the superfluous dough when it came time to lick the coveted cream. My tongue barely touched it and the taste was so vile that before the message could get to my brain, my tongue thankfully acted on instinct and instantly recoiled. Baked fresh every morning, my butt; it was rancid! I'm surprised I didn't contract instantaneous salmonella.)
But anyway, back to the wonder that is the exact replica (minus the salmonella): Vegan Treats' Boston creme creation.
All I can say is that you cannot tell the difference. I know that sometimes we longtime vegans haven't tasted things in such a long time that when we do and dub them "exactly like the real thing", non-vegans roll their eyes at our forgetfulness. But not this time. My father is an ardent carnivore amongst vegans and vegetarians. He kicks and screams against veg food (but he also can't cook: quite the fly in the ointment). With no choice but to consume veg food he is always looking for an excuse to complain about it; he LOVES when something vegan is disappointing, non-authentic, or bland. He loves it most when it's gross. But he will be the first to tell you that Vegan Treats' Boston Creme donut is the best ever. They have everything down: the taste and texture of the dough, icing, and luscious cream; it is a beautiful thing.
Ok, enough gushing. Over that one, anyway.
My favorite is actually the marshmallow cream: a super glazed "plain" donut (think Krispy Kreme) filled to the brim with the lightest, fluffiest whipped cream that exists. Note: for some reason this donut is best enjoyed within hours of purchasing. All others last for days in the fridge, but for optimum enjoyment I always make sure to eat this one immediately. Even if I accidentally buy 3. And a couple of other flavors. Don't judge me! This donut also comes in a devil's food version, but if you can believe it I've yet to try it.
Gotta give a nod to the super duper chocolatey, dense chocolate donut that you can get glazed or sprinkle coated. Be aware that while these are the same donut inside, overall they taste completely different. Take my word for it; I've done the research. The glazed version is decadent chocolateyness and the sprinkle one is more dense, sugary and crispy-- the donut, not the sprinkles. Both are great; it just depends what you're in the mood for: adult-fudgey or kid-sweet.
Can't forget the chocolate-covered angel's food, or what my family has dubbed "the Entenmann's". Remember those vanilla donuts covered in hard chocolate? The first ones to go missing out of the Entenmann's assortment box containing those, crumb, and plain (dumb)? Sooo good. Well, Vegan Treat's version is better b/c 1) they're way bigger and 2) they're covered with thicker chocolate. Bigger + more chocolate x vegan = TOTALLY BETTER. Plus, VT makes a devil's food version. Yep, that's right. So right after you're all, "these are so better than the original, non-vegan version", you're like, "Who needs them? Gimme the all chocolate ones now!"
Let's see, of course there's the powdered jelly: delicious & actually tastes fruity instead of fruit-tinged sugar goo. Lots of other cream filled powdereds too: banana, peanut butter, etc. And other plain, cream filled varieties topped with corresponding icing: oreo, pumpkin, coconut, bavarian, etc. Back to regular donuts, there are also seasonal varieties like pumpkin and gingerbread. Plus, they seem to often add new flavors/creations. 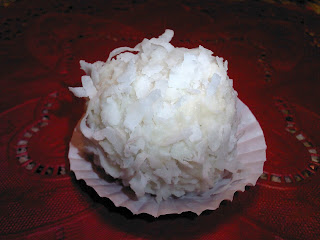 There's also a secret donut hole that they tell you is a "truffle", but no matter what they call it, if you see a little white, coconut snowball, grab it (pay for it, of course); it is a two-bite vanilla donut covered in white chocolate & rolled in coconut. YUM!
Basically, here is the deal: some vegan donut makers create homogeneous versions of the same donut. Not Vegan Treats. Each flavor is true, individual, and decadent. You can find them in a million places in the northeast, but best to visit the shoppe in Bethlehem, PA for the biggest selection at a time. They deliver to NY restaurants/establishments on Tuesdays and PA on Thursdays; all area vegans know this, so they sell out quickly!
Anyhoo that's just the donuts. Don't even get me started on the cakes, cookies, crumbs, bars, brownies, cupcakes... I'll leave them for another day.
Posted by Abby Bean at 8:19 PM