I recently had the opportunity to visit Mesob Ethiopian Restaurant in Montclair, NJ.  Mesob has been on my radar for some time because their website and printed menus both clearly indicate that their vegetarian selections are prepared "vegan style".  While the vegetarian selections at most Ethiopian restaurants are or can be prepared vegan, it's reassuring to see the word used in print so definitively: especially by an otherwise omnivorous restaurant.

The food: As an appetizer I had my first ever Ethiopian sambussa: kind of an African version of a samosa, it's smaller, flatter, and filled with lentils and onions instead of peas and potatoes.  While samosas are still my favorite, sambussas are now more than welcome on my plate, as well.  I also shared my dining companion's Timatim Fitfit, a cold "salad" consisting of torn injera pieces mixed with tomatoes, onions, garlic, jalapeno pepper, olive oil, lemon juice & spices.  I don't usually like Fitfit because it is generally soggy, but this was very good and not mushy in the least.

For dinner we both chose to go big or go home a six vegetable sampler in order to try an assortment of dishes between the two of us.  Not that it was a competition, but I would like to point out that I was the only diner who was able to finish every crumb of the meal! 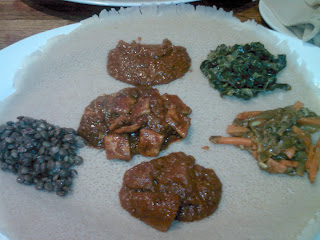 I chose (clockwise from top):
Miser Wat: split lentils in spicy sauce.  This had a very pleasant sweet and spicy taste to it and was my favorite selection.
Gomen: mild collard greens.  A little too mild for me, and missing the onions and tomatoes that I'm used to as being part of the dish.
Atkilt Wat: mild green beans and carrots.  Also very mild, but the beans in particular tasted surprisingly fresh rather than frozen.
Spicy potato dish that I can't remember the name of: tasted similar to the Miser Wat, but with potatoes!
Azifa: cold lentil salad with onions, garlic, jalapenos, olive oil, lemon juice, herbs & spices.  This one was hard to eat, as the lentils seemed to be on the loose!  I'm used to this being served in a thicker "sauce".
Shimbra Asa! Chickpea Cakes: I can't recall the exact name of this dish either.  It tasted similar to the Miser Wat, but with "chickpea cakes".  While I was expecting something along the lines of mini-chickpea pancakes or croquettes, the actual "cakes" were more similar to thick, toasted pita cubes. I didn't really like them, but inexplicably ate every last one simply because the sauce was so tasty. 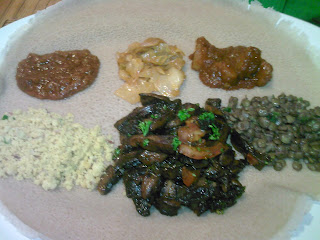 My fellow vegan diner chose (clockwise from top left):
Miser Wat
Tikile Gomen: cabbage and potatoes in mild sauce
Spicy potato dish
Azifa
Ingudai Tibs: marinated portabello mushrooms sauteed with onions, jalapenos, tomatoes, herbs & spices.  I suspect this is on the menu in an effort for the "vegetarian steak" to replicate one of the many meaty Tibs selections.  Although tasty, my dining companion was adamant that it missed the mark by not coming across as an authentic Ethiopian ingredient.  While it was prepared nicely (not rubbery like some portobello dishes), I agree that it did not mesh well with the other offerings.
Butcha: cold, crushed chick peas seasoned like the Azifa.  Although simple, I thought this was much tastier than the Azifa; it was easily my second favorite dish of the evening (even though it looked like chopped egg yolk).

Mesob's serving style was different than I've ever experienced at any other Ethiopian restaurant.  Instead of serving the dishes "assembled" (as seen here), a plate with plain injera was placed in front of each of us.  Then, the server proceeded to spoon each selection onto our plates from small, individual serving bowls.  I felt that it was a nice deviation from the norm and made the presentation of the meal more unique and quite ritualistic; it was a very nice touch.

The restaurant is decorated in typical Ethiopian style and it is large, but fills up quickly. The service we experienced was warm, friendly, and unobtrusive.  Even though every table was taken, we were never made to feel rushed.

One more thing, I do want to note that the photos are a bit deceiving; the portions were much more generous than they appear.  Overall, make your way over to Mesob and/or any other Ethiopian restaurant you can find.  The food is delicious, nutritious, vegan-friendly, and a nice addition to your doubtless ethnically varied, vegan-friendly repertoire.
Posted by Abby Bean at 1:45 PM