Terri Again: Another Butterfinger Shake AND a Sandwich!

It was about time that I got myself back to Cafe Terri to enjoy another of their incredible Butterfinger shakes.  Craig was not there so I got to meet the other owner.  Also nice, but there is nothing like having to crop Craig's bicep out of every photo (note: co-owner is also extremely fit)!

I had the esteemed tasting panel in tow, so we quickly ordered three beverages: 2 coveted Butterfinger shakes for the vegan and vegetarian, and 1 chocolate shake for the difficult, omni, holdout.  I bypassed the mocha chip brownie and the chocolate cupcake that I had previously enjoyed in search of something new.  Lo and behold, my eyes fell upon the ever elusive vegan Mexican wedding cookies! 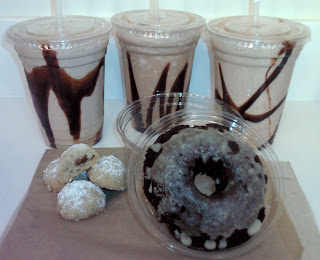 I was contemplating the rest of the desserts when the owner pointed out that they had donuts (score!) and boasted that they were baked, not fried (blasphemy!).  The response that was brewing was, "What is wrong with you; who wants a baked donut?" when he quickly recovered by telling me the available flavors, one of which was chocolate, chocolate chip with icing.  I have no recollection of what the other flavor was; who cared!?  Chocolate, CHOCOLATE CHIP with icing?  SOLD!

The Mexican wedding cookies were even better than I remembered.  Softly crisp with a perfect proportion of powdered sugar: they were simple and delicious, each generously containing an entire nut.  I serendipitously ran into Terri's Sarah the next day at the Vegan BakeSale and was happy to have the opportunity to rave about the cookies.  She divulged that it is actually a veganized version of her grandmother's recipe; how endearing (and incredibly delicious); thank you Sarah's grandma!

Onto the donuts.  I tried to put out of my mind that these renegade chocolate, chocolate chip donuts had never met with a fryer.  It turned out not to be so hard to overlook, as they were mighty fine regardless of how they were prepared.  Soft, chocolatey, chippy, and topped with sweet, glaze-y icing; maybe Terri should simply keep the ludicrous healthy baking information to themselves?  It would have been unfortunate if I'd allowed myself to be scared away by the divulgence; surely there are other anti-health conscious vegans out there like me.

Now I bet you think that I once again allowed myself to be sucked in by the sweets and didn't manage to try a sandwich.  You would be right.  So, I guiltily ordered a Jerk Tofu sandwich to go for the next day's dinner. 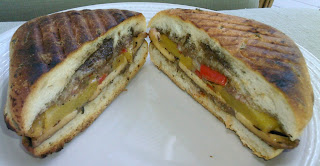 Expertly re-heated in the toaster oven under my watchful eye, I think I managed to achieve the perfect crisp to the previously fresh-pressed focaccia.  It all warmed up quite nicely and I thoroughly enjoyed the sweet and spicy play of the peppers, pineapple, and jerk sauce with the neutral tofu and crusty bread.

Did it beat the Butterfinger shake?  No!  But, what could?  I admit that I may never enjoy a freshly prepared sandwich at Terri if those Butterfinger shakes continue to be irresistible, but I'm already planning on which sandwich will be the lucky one to come home next time (do you hear me, Buffalo Chicken?).  If Terri's sandwiches are this good as leftovers they must be super delish fresh.  But, as long as shakes remain perishable, I will never know.

Important note: the chairs look the same, but they are fixed!  No more teeter-tottering as you scarf down casually relish your meal and desserts.
Posted by Abby Bean at 10:30 AM