Obviously the triple-decker cone I enjoyed at the end of Veggie Pride day was just a snack; I returned to Lula's this week for a more appropriate ice cream meal AND to get more stamps on my inaugural frequent-Lula's card (or would that be Lula's frequenter card?). 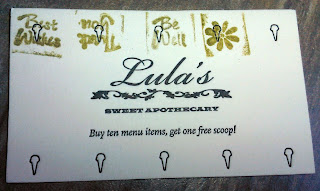 Lately I've been concentrating on what I consider to be the elite flavors, and they just keep getting better and better.  To me, these are the fancier flavor offerings: incredible combinations (double chocolate mint), strong tastes (bittersweet chocolate), and anything packed with stuff (caramel marshmallow graham).  Of course, no fruitiness allowed: excepting a special dispensation for peanut butter and jelly on account of it's general, superior peanut butteryness.

This particular visit consisted of a super-sized brownie mega-sundae for VM, and an equal-sized (course 1) sundae for me.  For the first time, we both went with the same flavors: 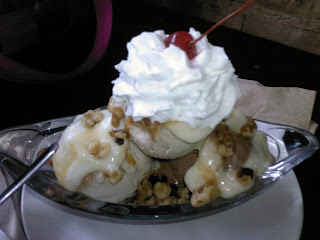 My creation was topped with hot fudge, graham crackers, coconut whipped cream, rainbow sprinkles and a cherry.  Note: if you've never tried graham crackers as a topping on your Lula's sundae, do it now; they are better than ever! 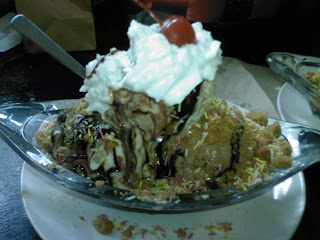 Staff and owners most certainly included, you always meet the nicest people in and around Lula's, which gives you enough time to digest and return for more.  "Ready for your second course?"  Indeed I was. 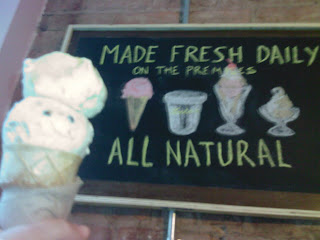