Mother's Day Breakfast, Courtesy of Sweet and Sara (Thank You!) 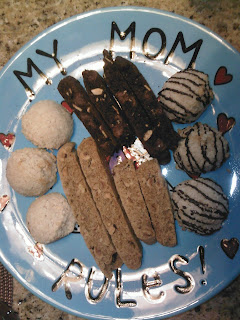 Sweet and Sara's tweet that there were biscotti in the works came across quite innocuously, but in fact it was a rather epic announcement.  You see, in my family it is known that the girl (Sara) who perfected a vegan version of the coveted toasted coconut covered marshmallow and created luscious rocky road bark can be trusted to present only the best possible version of whatever she is attempting.  I was sure the biscotti were to be no exception and, with Mother's day coming up, the treat was intended to make a great breakfast for my biscotti-loving Mom.

Of course, as long as I was placing a biscotti order it would have been silly of me not to also pick up the other two, new Sweet and Sara creations: macaroons ("plain" and chocolate drizzled) and rice krispy squares. 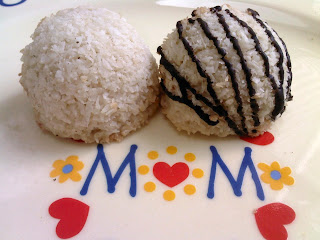 The esteemed tasting panel had been lucky enough to get a taste of the Sweet and Sara macaroons when they were still in production.  We thought they were incredible, but the new batch was positively exquisite.  Moist, sweet, and a nice crunch around the edge to give a subtle touch of toastiness.  We enjoyed ours at room temperature, but will try them warmed- per S&S suggestion- next time around.  One note: my chocolate-loving Mom would like me to send a special request to Sara on her behalf, "The drizzle is a tease; please dunk the whole macaroon in your sweet, dark chocolate!"; and now you see where I get it from. 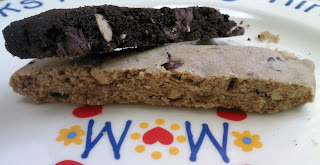 Let's just cut to the chase; the biscotti were incredible; both varieties pack tons of flavor.  They are not your grandmother's crumbly, bland biscotti; these are refined versions of the highest caliber cookies.  The texture is perfected: crisp rather than dry, and the fillings/flavors are generously represented.  The double chocolate mocha almond biscotti boasts a superior, full-bodied, dark chocolate taste: filled with chips and chunks of toasted almonds (instead of those chintzy slivers most inferior baked goods contain).  Even though we're a panel of chocolate lovers, the cinnamon hazelnut biscotti was just as divine: with a warm, cinnamon touch highlighted by veritable hunks of yummy, toasty hazelnuts.  Should any of us be forced to choose a favorite between the two we could not. 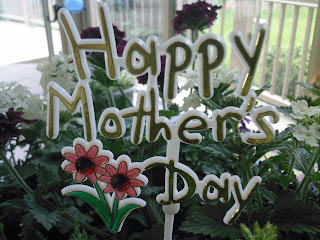 The rice crispy treats look irresistibly delicious (they are moist & flexible!), but we did not get to them for breakfast because it was late and we had to leave room for dinner.  So, stay tuned for their inevitable enjoyment highlighted in a future post.  Until then, profuse thanks to Sara for always providing such luscious treats for my multi-level veg family to enjoy together.  My Mom rules & so do you.

*Shout out to Lula's who, in addition to their own confectionery deliciousness, is carrying the entire line of Sweet and Sara scrumptiousness!
Posted by Abby Bean at 1:05 PM