This weekend was the annual Thanksliving event at Woodstock Farm Animal Sanctuary. Contrary to the turkey-as-meal tradition associated with Thanksgiving, the shindig that is Thanksliving is held in their honor, along with the bonus attendance of (and opportune frolic with) other WFAS residents: friendly pigs, chickens, rabbits, cows, ducks, etc. who represent their brethren who continue to be considered "food animals".

Unlike last year's cold, rainy, and therefore muddy day; 10/10/10 was gorgeous.  While walking up to the entry barn we spied an assortment of friends outside, living in peace. 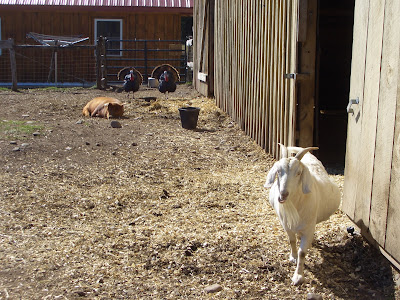 Harmony abandoned, a couple of spunky goats then chased these crazy turkeys back inside in time to greet us face to face.  They were like synchronized trotters; they turned in unison, walked in cadence, and even sported identical mood coloring on their noggins throughout the day. 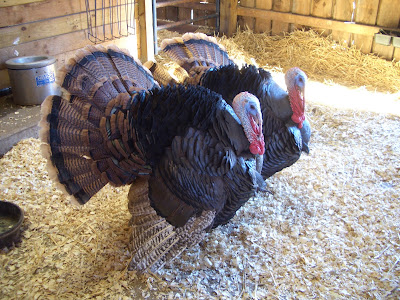 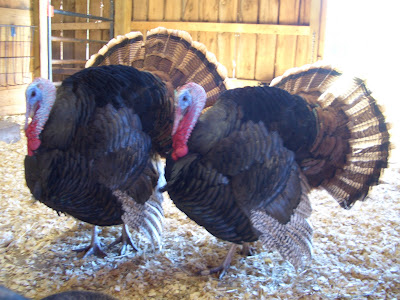 Then another cordial turkey made our acquaintance. 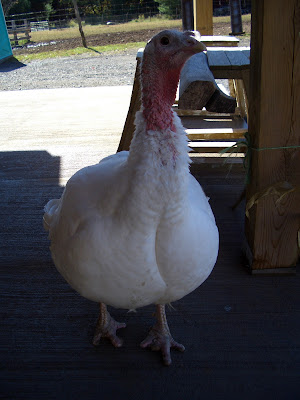 Since we were early we had plenty of time to visit with the residents.  Unfortunately there weren't any volunteers around to chat about the animals with the other early arriving attendees, but we made our way around the now familiar farm just fine on our own.  It was hard not to make a beeline for Dylan, who I think may never stop growing. 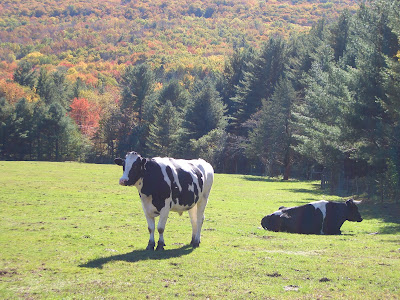 Although he wasn't within petting reach, I was instead able to formally meet a bull.  I even got to glimpse his awesome teeth up close! 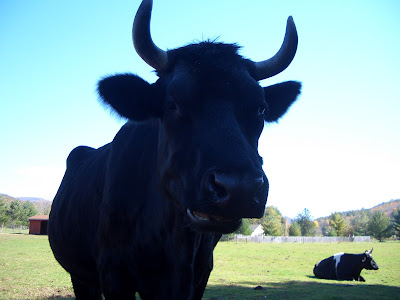 The ducks, geese, etc. were well acclimated to their "new" habitat and didn't seem to pay us any mind. 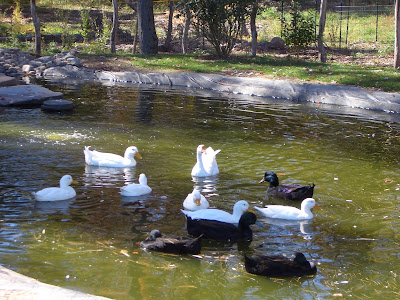 And then I noticed this one who was pretending to be sleeping, but really had his eye on us.  Faker! 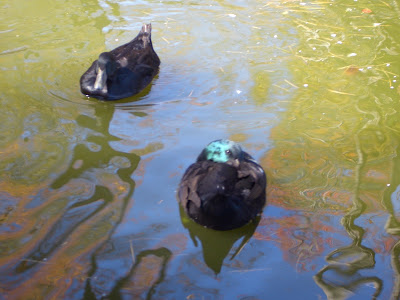 Time again to visit the beautiful chickens of WFAS, shown here trying to get a glimpse of what was being served for dinner. 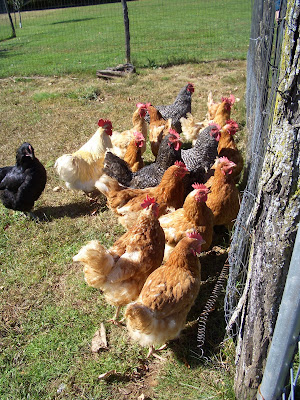 You can't help but pet all of the giant pigs at the farm, but these new additions were the stars of the show this day. 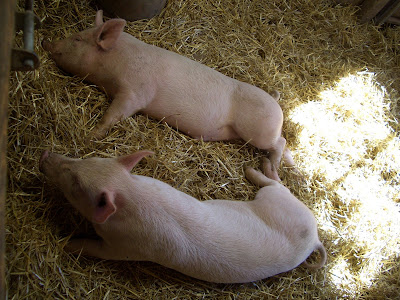 And then it was time for the event.  After consuming as many black-eyed pea cakes as we could fit into our bellies, we took our seats.  Bruce Friedrich gave a very informative presentation and Jenny Brown was as endearing as ever, but it was Dan Piraro who stole the show.  Besides being funny, we applaud him exponentially for having taken the stage during the meal to specifically call out the the seemingly clueless folks in the audience who thought it was a good idea to come to an hours long vegan event and leave their dogs in the car.  One particular jerk waited until the second such announcement (the first was a non-confrontational plea from Jenny) to actually get off his can to retrieve his pet.  Perhaps it was Dan's having pointed out that vegans at the event would not hesitate to break into cars to liberate such animals that finally got him to move.  Really, people?  I suppose I shouldn't have been surprised, however, since his friend spent the meal explaining to us how much better she feels after having added fish to her "vegetarian" diet.  Am I a magnet for these people? 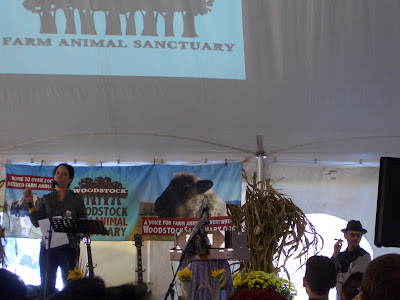 Onto the grub.  Why have I never had this yummy Teany flavor before?  It's vanilla berry hibiscus for my far-sighted friends: pleasant, sweet, not too tea-y, and not at all flowery.  VM went with some Frey wine AND Brooklyn lager; can I get a holla for the designated driver!?  The meal was courtesy of Second Helpings, an independent vegan caterer who provided kale salad, a cranberry rice concoction, vanilla sweet potato mash, and an awesome butternut squash soup with corn.  Had I had some hot sauce on hand this might have been one of the best soups I've had outside of home (Mom's matzoh ball, woot!).  Speaking of, VM was too full so I got to chow down on her portion as well; second helping indeed.  Hey, check out the fab gourd that I unceremoniously absconded with. 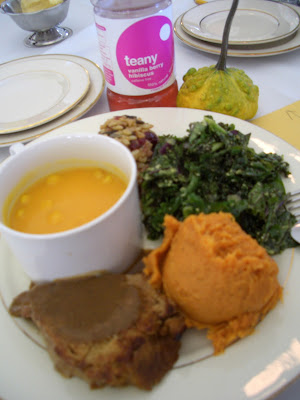 But you know what we really came here for, right?  Per usual, massive quantities of decadence donated by the uber-generous and incomparable Vegan Treats (with a couple of mini cupcakes and very good chocolate chip cookies courtesy of Cocoa V).  For those of you not in the know, you are looking at fabulous desserts pumpkin cheesecake, tiramisu, peanut butter bomb, and chocolate-covered strawberry shortcake...X 2! 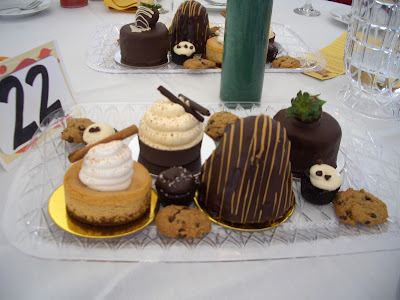 As if that wasn't enough, there was more time with the animals afterward.  Time to revisit the pigs. 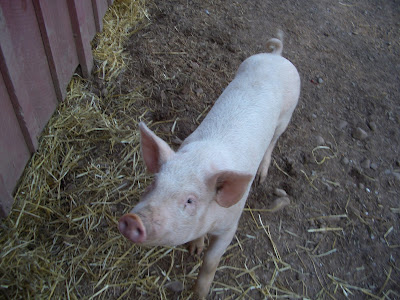 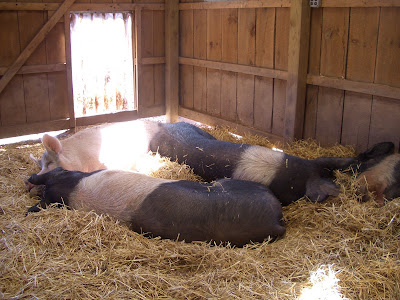 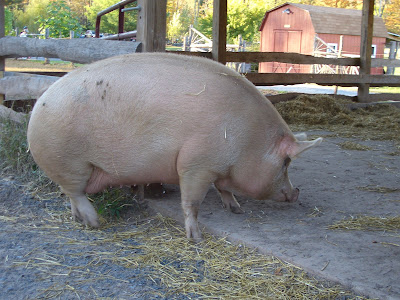 And wouldn't you know it, a turkey came to bid us goodbye until next year. 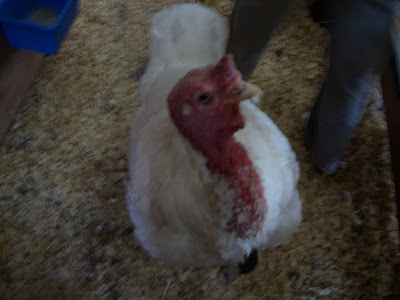 If you haven't yet visited Woodstock Farm Animal Sanctuary, I recommend that you do.
Posted by Abby Bean at 10:41 AM