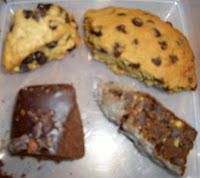 So, I decided to revisit Cocoa V for two reasons, neither of which was in the spirit of 2nd chances.

Reason #1: The dessert I had just eaten at Blossom was small, unsatisfactory, and did not contain chocolate (thus negating it's categorization as dessert).
Reason #2: I was nearby and curious to see how popular the oft-written about media darling of the vegan chocolate world was really doing.

It was "dessert time" by my watch (literally: it was after dinnertime), but there was nary a soul inside except for one employee: both the store and the cafe were completely empty.  Once again, the samples were miniscule, unlabeled, and un-offered; once again, I took it as an unspoken "Help yourself".  Unfortunately, I wound up mistakenly trying a chocolate-covered crumb of crystallized ginger and almost gagged on the potency* until I was able to shove a shard of pumpkin seed bark in my mouth to counter the taste.  Surprisingly, the counterperson politely acted like he didn't notice the incident and I will say that the bark seemed tasty, although the escapade prevents me from being able to sufficiently expound.

My eye was quickly drawn to a counter beyond the chocolate spread:  filled with a large assortment of baked goodies in large, glass jars.  Despite the obvious thievery of Lula's brilliance, I will say that the addition of these varied and fairly priced options was a good move on the part of Cocoa V for those of us who prefer baked goods over candy-- especially when said candy can run well upwards of $3 per morsel.

I ultimately chose four items, of which you see pathetic halfsies in the picture.  Frankly, as a loyal fan of Vegan Treats, I did not expect to be impressed.  But then I tasted one thing in the cab, and that turned into tasting another, and then another, and then all.  By the time I was out of the moving vehicle this is what was left to photograph.

Overall I'd note the following:
So this is my new theory on Cocoa V: enjoy dinner at Blossom, but skip the boring, sub-par dessert offerings.  Grab an assortment of tasty goods from Cocoa V's newly added buffet of mini-desserts, but take it to-go in an effort to avoid the pretension, loneliness, and steeply priced menu-offerings.

One more thing: Cocoa V was selling what seemed to be a handful of re-packaged Dandies in an unmarked bag for $4.  A real bag of Dandies contains at least five times the amount for just about a $1 more; don't let yourself be taken.

*This is not necessarily a judgement on Cocoa V's crystallized ginger; I happen to simply abhor it in any form.
Posted by Abby Bean at 8:10 AM