I've been an awestruck fan of Vegan Treats ever since the first slice of cake passed my lips, and I blog about them pretty often.  Sure, you can find Vegan Treats across the country (perhaps beyond?), but a visit to their "home store" is a must for all sweets-loving vegans.  It has occurred to me that for those of you who have never had the pleasure of visiting their retail shoppe in Bethlehem, PA, you might not understand exactly what makes this vegan Mecca so extraordinary.

Well, my friends; let me try to show you a typical visit's bounty:

As if that isn't enough:

Vegan Treats is a true pioneer of delicious, dessertous, vegan baking.  The tasty quotient is not only sky-high, but extremely consistent.  Even better, they don't rest on their laurels.  I have never visited the shop when there weren't at least five new things to try...allowing you to always enjoy longstanding favorites, as well as giving you the opportunity to find new ones regularly (so I go there alot, mind your own beeswax).

On this particular visit I enjoyed a chocolate, chocolate chip cheesecake cupcake, a chocolate hazelnut truffle munchkin* (there's half missing because, gasp, I shared), and an Entenmann's style chocolate-coated angel's food donut. 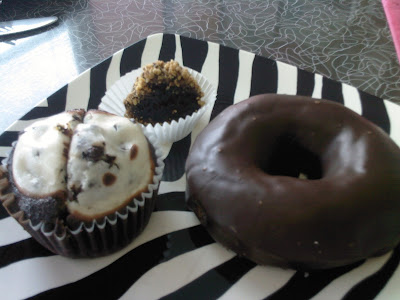 The take home booty
*Obviously Vegan Treats doesn't call these things truffle munchkins (not sure what they call them), but they seem like a cross between a rich, decadent truffle and a moist, gourmet donut hole.  I've had the white chocolate, coconut, vanilla version before and this was its distinct opposite: decadent in equal measure.  Imagine the most succulent, dark, chocolatey cake you can imagine: rolled in perfectly toasted hazelnut bits. 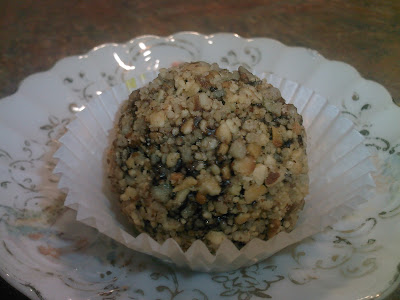 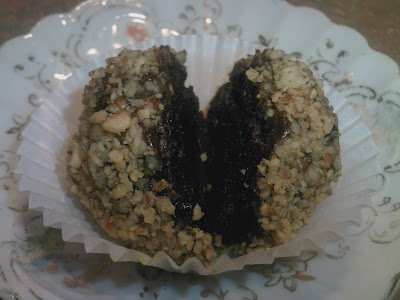 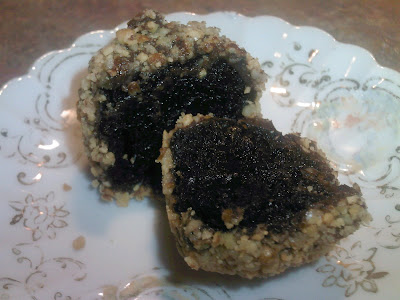 And who can resist a Vegan Treats cake that looks like it's been gift wrapped?  I certainly can't.  I honestly have no recollection of what this cake is called; but, having just eaten a truffle munchkin, I was even more gaga than usual over chocolate hazelnut and therefore had to bring home this giant, gorgeous, petit four masquerading as a cake. 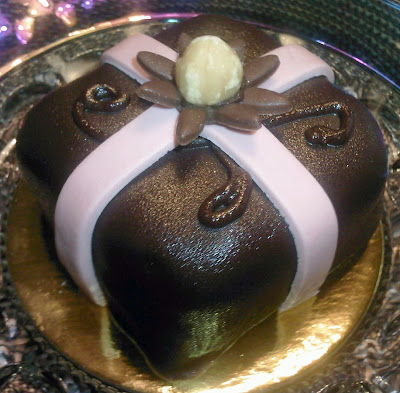 Not as hazelnutty as it was chocolatey rich, it could give their Death by Chocolate a run for it's money (I still love you, DBC!). 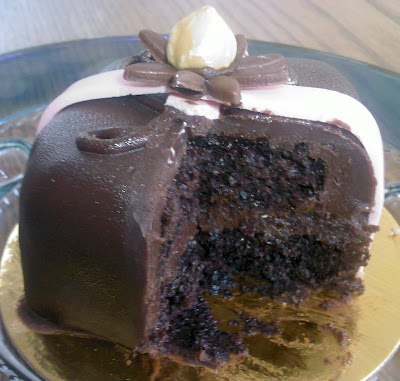 Brace yourselves for this next one.  It was kind of mysterious looking and my inquiry yielded the following description: caramel cheesecake, a layer of caramel, marshmallow whipped cream (my FAVORITE), surrounded by swiss chocolate.  For some reason, I was under the impression that there was a kind of decorative, cardboard cone holding all of this deliciousness in: not so.  That is the chocolate! 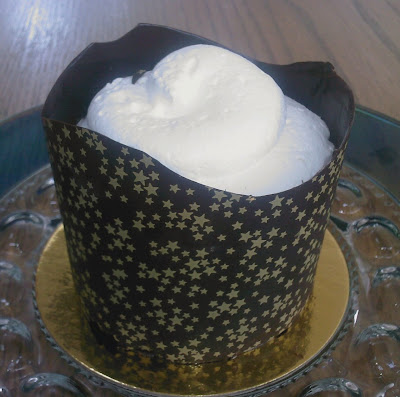 I delicately cut into it to reveal pure scrumptiousness.


Already crazy for VT's cheesecake, this one was the smoothest, velvetiest one I have ever had.  So shiny from the caramel, it almost looked like flan: minus the jiggly grossness (due to said jiggliness I have never eaten flan, so this is purely a visual comparison).  As you can see, the caramel could not be controlled.  Fret not, nary a drop went to waste.  And the chocolate?  Oh, the chocolate.  My favorite whipped cream paired with chocolate?  Let's just say that this was one of the best things I've ever had the pleasure of eating from VT.

In conclusion, Vegan Treats rocks.  Frankly, I think they should trademark the term "Vegan Treats" because it's a little disheartening when people refer to another dessert as a "vegan treat", only to find out that it's far from it.  I, for one, never label my own atrocious baking with the sacred phrase!  Not that other vegan baking can't be good (mine excluded), but since VT is so recognizable-- can't we agree on another non-specific term to use when referring generally to vegan goodies?  Okay, obviously "goody" is not going to work, but you know what I'm saying.  This way, there would be no disappointment when someone promises you a vegan "treat"... and it turns out to be a horrendous embarrassment to veganism crap.  Until then, much respect to the real Vegan Treats for making me a proud and satiated vegan.
Posted by Abby Bean at 12:58 PM