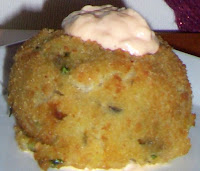 Another dinner at Blossom where two pathetic diners can't help but order the very same things they always do, but don't regret it in the least.

For starters, the beloved Black-eyed Pea Cake.  Oh pea-cake, how we love thee.  This was a decidedly rounder and less crispy (smaller?)version of Blossom's single pea cake appetizer (Cafe Blossom serves two miniature ones in their variation), but equally delicious.  Filled with yukon-gold potatoes, black-eyed peas, onions, bell peppers, and probably other unidentified goodies, this appetizer is a winner topped with and sitting atop of an addictive chipotle aioli. 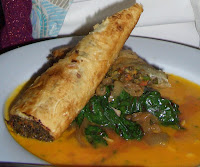 For dinner, the (seemingly smaller) lentil-packed Phyllo Roullade swimming in a buttery carrot cream broth and served with swiss chard and carmelized onions: this alone could make Chelsea's Blossom your favorite of the group (and it has for us). I like to pretend that you can't adequately reheat phyllo dough as an excuse to finish the whole portion, but I will have to test this theory one day because I certainly wouldn't mind having this for dinner two nights in a row (or twelve).

We don't usually do dessert at Blossom, but for some reason I decided we should try the caramel apple cigars for dessert.  I am neither a fan of apples or fruit as dessert in general, but my companion loves the combo and I was feeling generous.  Error in judgement.  The boring, miniscule order consisted of 4 teeny phyllo sticks (~2" long with a dime equivalent circumference) "filled" with barely visible pieces of apple.  There was a tasteless, caramel-colored liquid sloshing around the plate, but the piece de resistence was the foul, melon-ball serving of "vegan ice cream".  Perhaps I'm now spoiled by Lula's, but for a restaurant whose food offerings I hold in such high regard to offer such an unappetizing ice cream was both surprising and disappointing.

Here's my current take on Blossom:
* alternate dessert suggestion to be offered in next post
Posted by Abby Bean at 12:39 PM