Anxious to finally visit The V-Spot, we didn't have any idea what to expect.  The dining room and vibe were considerably more casual than I had anticipated, but I was immediately won over by the "No Fur" stickers strategically placed over the coat hooks.

Unfortunately, though, our welcome acknowledgment was half-hearted and the service was a bit disjointed from the start.  It took asking three separate people just to find out if the sangria was red or white.  While it wasn't an unusual inquiry, the first person shrugged and ultimately ignored us.  The second looked at us quizzically, walked away as though he was going to ask, but never returned.  Finally, the third was able to "find out" that it is red.  It wound up being delicious, but the lackadaisical response had me concerned for how the rest of the evening would play out.
﻿
﻿Although most of the menu is Latin-inspired, I was surprised by how many random vegan standards there are as well: edamame, chicken parmesan...even pad Thai.  We decided to keep a Latin theme to our meal and, after having tried one at the Veggie Pride Parade, I knew we had to start with an order of the delicious empanadas. 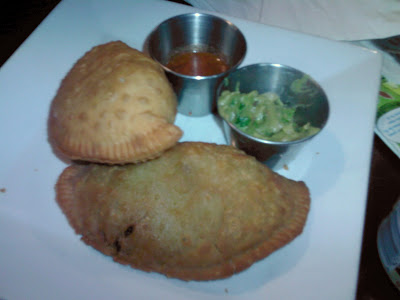 The two fried flour tortillas packed with potato, carrot, onion, cilantro, corn, and Latin-seasoned seitan were even better than I remembered and we devoured them.  So good, in fact, that I didn't even notice the dreaded cilantro! 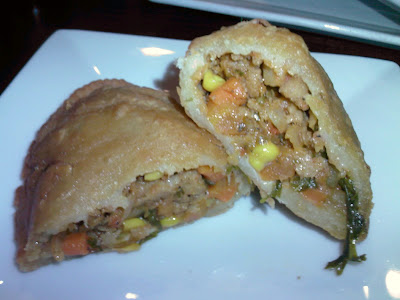 Since we both love raw kale, we also chose the kale tostadas: two toasted crunchy corn tortillas topped with raw kale, black beans, avocado, hot sauce, and sprinkled with vegan parm; they were absolutely out of this world.  As with the empanadas, these are a must order. 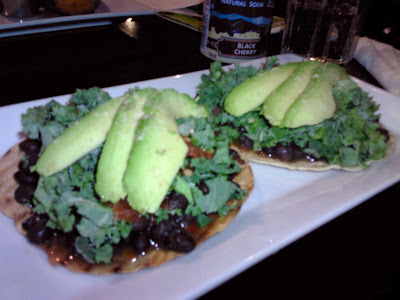 After ordering our appetizers we had asked to keep our menus so that we could take more time to decide on our entrees.  We weren't in a rush, but we did find it odd that no one ever returned to ask us what we had decided, to offer suggestions, or even to simply check in to see how we were doing.  Eventually I realized I was going to have to be pro-active, so, sometime after our appetizer plates were cleared, I flagged someone down to place our dinner order.

Since you can never have enough kale, we ordered a side of the curried kale with chick peas; it was a delicious and hearty portion. 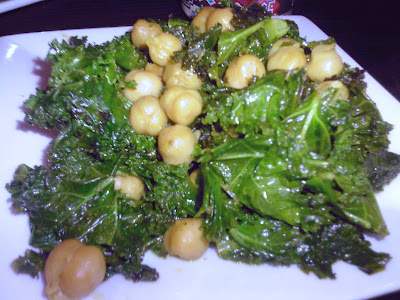 In keeping with the theme of our meal, we also chose a side order of tostones.  Crisp and salty, these were served with an extremely rich and buttery garlic sauce; we both preferred the salsa for dipping. 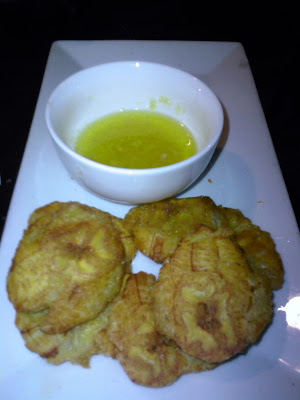 For dinner I chose the portabello spinach tacos: three soft tortillas filled with mushroom, spinach, potato, chipotle spiced refried beans and avocado.  The tacos had more of a smoky taste than I expected, and were not particularly spicy.  What surprised me most, though, was the fact that rather than containing cubed potatoes, the tacos were instead shmeared with standard mashed potatoes.  Not only didn't this seem authentic, but it gave the whole taco a disappointingly mealy, mushy consistency.

Served with sweet plantain and salad, I assumed that "sweet plantain" referred to maduros: traditional sweet and extremely soft plantains.  However, these were instead simply half-prepared tostones (after the first fry, but before the smash, second fry, and salt).  Total sad face. 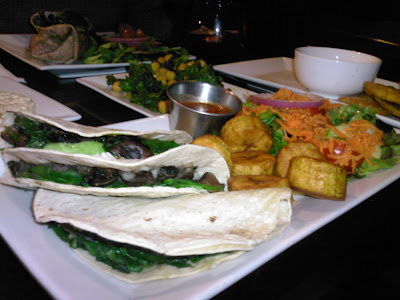 Per usual, VM chose the tastier meal: the spinach burrito: garlic sauteed spinach wrapped with guacamole, black beans, vegan sour cream, salsa, and Daiya cheddar cheese.  The spinach was super-garlicky and everything worked really well together: especially the Daiya (swoon) and the cool & creamy sour cream.  The salad was forgettable and under-dressed. 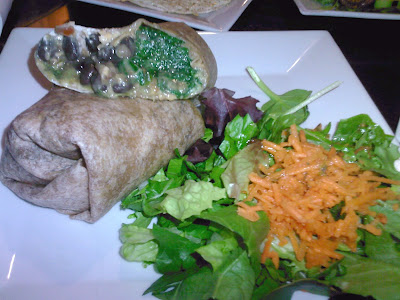 As we neared the end of our meal we began to notice that the diners around us all seemed to be ordering the same small bowl of something with chips.  We assumed that this was a popular specialty of the house that we were unaware of, but it turned out that it was actually complimentary chips and salsa that we hadn't received.  We were too full to even consider inquiring, but the omission didn't leave us feeling particularly welcome.

Especially amongst my friends, V-Spot is a popular and much-loved restaurant.  That, coupled with the fact that I will require more of their outstanding tostadas and empanadas in the future, has me hoping that the less than stellar parts of our experience were the exception and not the rule.  I'm happy to keep an open mind and check back; I recommend you do too.
Posted by Abby Bean at 6:30 AM

Email ThisBlogThis!Share to TwitterShare to FacebookShare to Pinterest
Labels: V-Spot