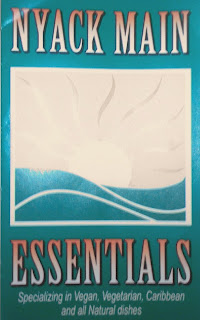 I've had it in my head to visit Main Essentials (based upon BRR's recommendation) and finally had the opportunity when I was recently in the vicinity.  After hearing it referred to as a juice bar serving vegetarian cuisine, I was surprised to find that it is actually a sizable, beautiful restaurant.  We stopped by an hour before closing on a Saturday night, and although the buffet offerings were dwindling, we were warmly welcomed by the gentleman who served as host and waiter.

The diner at the next table was raving about his selections from the buffet, but we decided to go with an assortment from the menu, which is varied.  Although Main Essentials tauts itself as Caribbean, the menu features an eclectic mix of American, Spanish, and Middle Eastern comfort foods: all vegan. 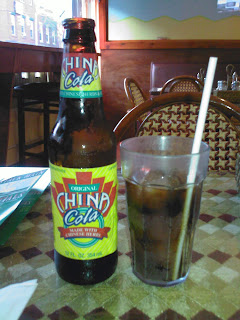 I'm usually a water girl, but for some reason I could not resist trying the China Cola.  I was a little wary that it would taste "weird" (i.e., healthy), but I thought I'd be daring.

As it turns out, it's not made in China, but instead contains an herbal infusion imported from China.  Blah, blah, blah, it tastes good.  Think all of the delicious notes of a traditional cola, but without the chemical taste.  I am definitely a new fan; now I just have to find an area market that carries it. 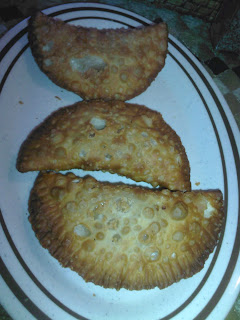 Of course I had to order the empanadas, which were crispy fried and tasty (is anything ever crispy fried and not tasty?).  I was surprised that they weren't spicy, but a few dashes of the cayenne on the table did the trick.

Yes, in addition to traditional salt and pepper, each table offers malt vinegar and pepper powder to doctor up your goods.  While I missed my hot sauce, it was nice to experiment with other ingredients for a change. 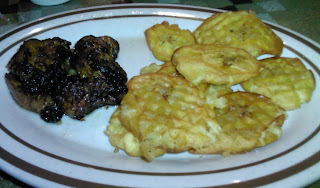 In keeping with my theme of the evening, I went with an order of half sweet plantains and half green.  I had an idea of what sweet plantains were, as I'd had them once before a long time ago.  Main Essentials' version were extremely sweet and tasty, almost carmelized on the outside and much better than I remembered.  The green plantains, on the other hand, I'd never tried; wow!  They were my favorite and I've officially eaten my last plantain chip; the green plantains are the real deal. I did feel that they needed a dipping sauce; is that very American of me?  Should have tried the malt vinegar! 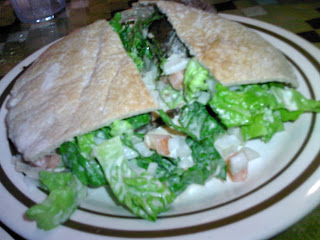 VM went with a falafel sandwich because she can never pass up a falafel.  While a sandwich wasn't on the menu, they were happy to accommodate the special request.

I actually don't know if they have dessert (!) because, at the time, I was too full of fried foods to wonder.  Hard to believe, but true.

The service at Main Essentials is extremely hospitable, the food fresh & tasty, and the prices extremely fair.  Definitely worth a stop when you're in town!
Posted by Abby Bean at 6:32 AM