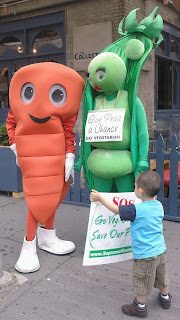 This weekend I had the pleasure of attending the third NYC Veggie Pride Parade.  @GonePie* invited me to walk with Friends of Animals and I was happy to do so alongside friendly vegans from Woodstock Farm Animal Sanctuary, Veggie Conquest, NYC Vegan Eatup, and many more.  Before you ask, the vegetarian Mom did NOT attend, but was asked after often.  See that, Veggie Mom: going veg is good for the animals, your health, AND your social life.  You are one of us now!

I arrived at the starting point cynically aware of the seemingly unnecessary police presence.  I wondered if they expected us peaceniks to be a rowdy bunch. 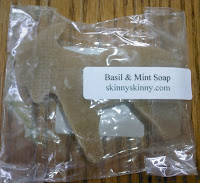 Almost immediately I was handed this little soap sample; can you see how cute it is shaped like a goat?  Rowdy indeed. 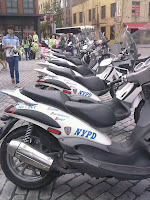 When I looked back it was to find that the coppers had abandoned their cycles.  They soon returned, however, if only to stink up the air with the smell of rotting flesh that was emanating from their tin-foil wrapped breakfasts of ham and egg sandwiches.  It was nice to see they were taking our message to heart. 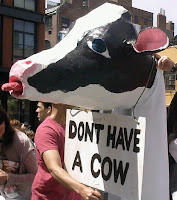 As we gathered, there were many interesting sights to behold, including this cow from WFAS.  There were plenty of human fruits and veggies wandering amongst us mere vegans, and even Evan McGraw of Vegan Danishes fame was hiding in a banana suit.

Finally, I met up with the Friends of Animals crew and we were off.  I must ultimately tip my hat to the men in blue.  Despite their disrespectful breakfast of unsavories, they did an impeccable job of controlling traffic so that we could seamlessly make our way to Union Square Park, spreading our message of compassion along the way. 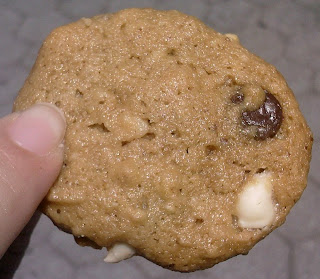 Once at Union Square, it was somewhat of a free-for all.  The marchers had worked up a considerable appetite spreading the vegan word, and- per usual-  pounced upon the tables offering edible freebies.  The first thing I snagged was a yummy, three-bite, white and dark chocolate chip Gone Pie cookie from the Friends of Animals/Coaliton to Ban Horse Drawn Carriages table.  DELICIOUS!  It was crisp on the outside, chewy on the inside, and the equally rich chip flavors were only improved by the weather-induced semi-meltiness.  I am very picky about cookies and this was cookie perfection.

I then headed out amongst the crowd for some info and snacks.  It was hard to acquire either, as the throngs were pretty dense.  The only pre-packaged items I was able to pick up were Raw Rev bars in two flavors: spirulina & cashew, and chocolate coconut.  Surprisingly, they were both very tasty (I like dates). 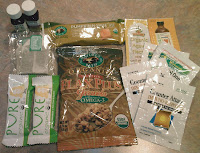 Next I stopped by Integral Yoga's table, only to be unexpectedly handed a bag full of booty.  It's going to take me a while to get through all of these goodies, but it was a nice introduction to IY beyond being a place to score Gone Pie goodness.

I was then given the opportunity to hand out Friends of Animals' super-convenient New York restaurant guides with the adorable and entertaining @Mikeypod; I quickly obliged, using it as an excuse to snag another fabulous Gone Pie cookie as incentive.  But, I can honestly say that it was thoroughly enjoyable having the guide as an excuse to interact with festival attendees and I frankly don't know which I enjoyed more: my second cookie, or the company of the fabu @MikeyPod.  The recently updated guide was instantly recognizable to most and therefore we were very popular amongst the crowd for giving out what seemed to be the only coveted item that wasn't edible. 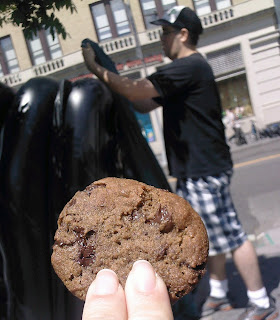 At some point I spied the free cookie guy, Scott Alexander, dragging his ubiquitous, inflatable couch along Union Square; so, I submitted myself to a self-imposed break in order to chase him down meet him.  The cookie of the day was double chocolate chip mint and it was undoubtedly fresh and tasty.  A nearby group of adults and children quickly surmised that his cookies were free and began a conversation with Scott as they munched multiples each.  The highlight of experiencing this interaction was when he asked the two adults if they were vegan and the answer was, "We're trying."  His answer?  "Who's stopping you?"  A tip of the hat to you, sir.  Some time later these same folks were still enjoying the cookies and un-solicitously calling out to passerby, "free vegetable cookies!" 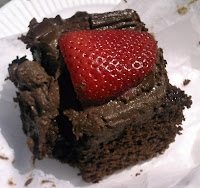 One of the most crowded tables at the festival was undoubtedly Whole Earth Bakery.  They had a perpetual mob in front of their double-wide table, and you couldn't take a step without bumping into someone with a mouthful of their pizza, cookies, cake, etc.  I myself waited in the mob-line for about fifteen minutes and when I made my way to the front I asked for a taste of the chocolate-covered rice rice crispy treat.  The response was, "If you say MAY I instead of CAN I."  What is it about grumpy old men who think this is a funny and/or virile display of their vastly non-existent authority in the world?  I quelled my inclination to answer negatively amidst the positivity of the event and complied with his banal request.  Would you believe he then told me that since the sea of people had delivered me to the cake end of the table that was all I could have without getting back on "line"?  I seethed for a moment and then acquiesced, at which point there was one, single solitary piece of cake left on the tray.  Another man behind the table looked right past me and asked, "Now who should get the last piece?".  Infuriated, I answered that it should probably be the next person in line, which was ME.  He inexplicably replied, "Well then you have to tell me the name of my bakery."  Despite the ludicrous request, I complied and he handed me the cake.  Do you know what I got for my unbridled patience with these ornery, annoying men?  A piece of tasteless cake topped with extremely unpalatable frosting and a dried out strawberry.  But, more importantly, I took away a reminder not to associate with people who act like they are doing you a favor.  If you can't give from a kind and generous place, don't give!  Moving on. 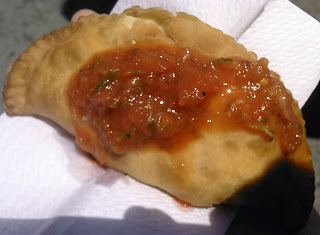 As if the universe knew I needed some vegan love, I next visited the V-Spot  table to find the friendly Danny and Steve equipped with 1700 (yes, you read that right) empanadas that they were generously and cordially distributing to the hungry crowd.  Not only did I thoroughly enjoy the homemade seitan, potato, corn (and even cilantro) empanada, but I greatly appreciated the warmth and magnanimity with which the duo was sharing with the masses on behalf of the V-Spot.  So much so, in fact, that I offered to pitch in by spooning some fresh, homemade salsa onto the crowd's empanadas for a bit: donning gloves and working on the other side of a sample table.  And you know what, Whole Earth Bakery meanies?  It's not so hard to be nice!  Thanks to both Danny and Steve for allowing me to hang with them for a bit, and to the V-Spot in general for the scrumptious snack.  I will be seeing you soon to enjoy an enormous a proper meal.

As an added bonus, I finally had the opportunity to meet Sara**, as in THE Sweet and Sara, amidst the salsa-spooning escapades.  She is as fantastic in person as I've known her to be via email and I hope to see her again soon.  For a moment there I found myself surrounded by a trio of admirable, pioneering, vegan entrepreneurs and I was humbled and awed.  Barbara, Sara, and Danny: I am proud to belong to a community and a movement that you advance by sharing your talents; thank you.

At this point myself and my vegan companions were exhausted, hungry, and thirsty.  We hoofed it over to Sacred Chow where I relaxed, promptly forgot I was a vegan food blogger, and neglected to photograph any of our delicious grub.  For shame.  For the sake of posterity, three heroes were enjoyed: a tempeh reuben, orange barbecued seitan, and roasted black olive seitan.  It was great fun to be sitting with vegan friends in a vegan establishment, surrounded by fellow vegans you either knew or had become familiar with throughout the day.  It truly felt that the vegans had taken over the city and served to perpetuate the sense of vegan community that was fostered during the parade and further flourished at the festival. 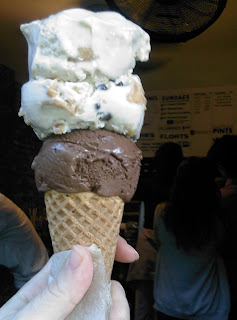 In a fitting end to the day, I visited the newly renovated Lula's*** for a beautiful and architecturally sound creation by Luke: behold the three scooped sugar cone.  From top to bottom you're looking at Caramel Marshmallow Graham (filled with Sweet & Sara marshies), Drumstick (vanilla i/c bursting with sugar cone pieces, chocolate chips, and peanuts), and Bittersweet Chocolate. Drumstick now completely trumps Maple & Waffles in my book and, in my opinion, Caramel Marshmallow Graham is thus far the best flavor B & D have come up with since Lula's inception.

Exhausted, I headed home with a brief pause for traffic.

Seriously Mom, I'm still thrilled that you're veg but you have an obligation to connect with your veg peeps at events such as this.
Posted by Abby Bean at 4:57 PM