I've been on kind of a pizza kick, so I recently decided to pit Trader Joe's Vegan Mozzarella up against Daiya Vegan Mozzarella in a cheese to cheese battle of the best pizza; it had to be done. 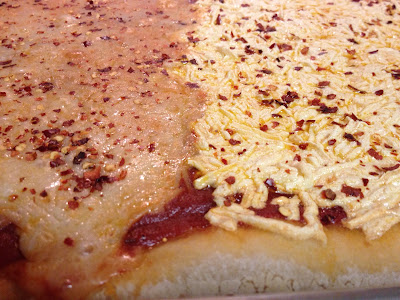 When I'd initially spied the newbie to the vegan cheese world in my local TJs, I dismissed it; I'm a Daiya loyalist.  People kept telling me it was totally different, so when this big sign caught my eye, I figured the universe was trying to tell me something. 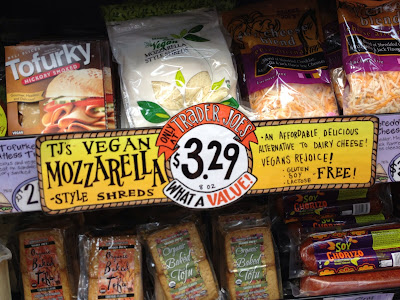 It was time to see what Trader Joe's had up it's sleeve in comparison to my beloved Daiya. 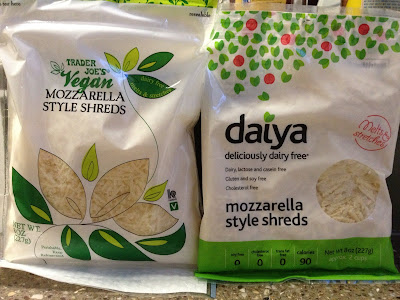 The TJ's shreds are smaller and drier in appearance and feel; it's similar to freshly grated, non-vegan, parmesan and has an out-of-the-bag taste as such as well.  I did not like it plain, as I was never a fan of Parmesan cheese. 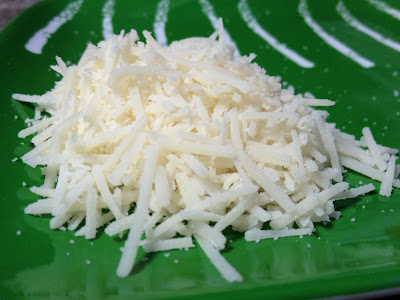 The Daiya maintains a larger, wetter shred: similar to non-vegan mozzarella.  While I wouldn't eat it plain by the spoonful, it is pleasant enough out of the bag. 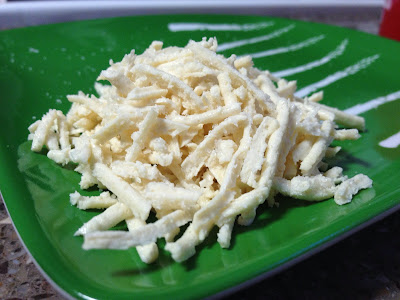 I have to admit that my lazy behind bought a ball of dough from my local pizzeria (check out this awesome dough-handling video) and I swiped a container of sauce out of VM's freezer. 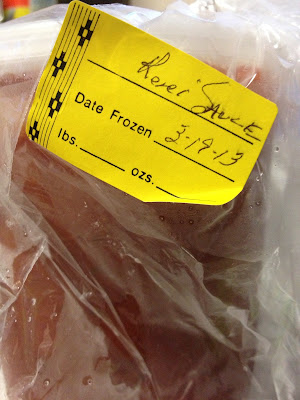 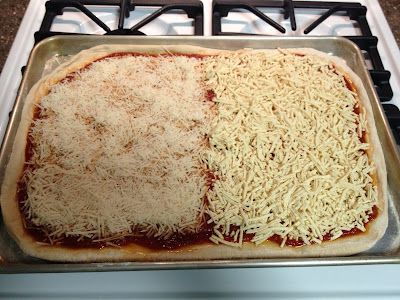 The TJ's mozz absorbed the sauce as I sprinkled.  Yet even though I piled it on and covered more than half of the pie with it, I still wound up with some left in the bag.  This worked out to my advantage because VM was able to test my parmesan theory and concur: right out of the bag, it does taste like fresh parmesan. 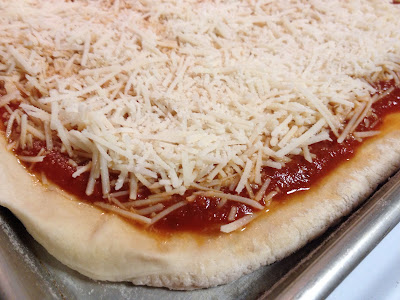 I piled the entire bag of Daiya on the unintentionally smaller side of the pie. 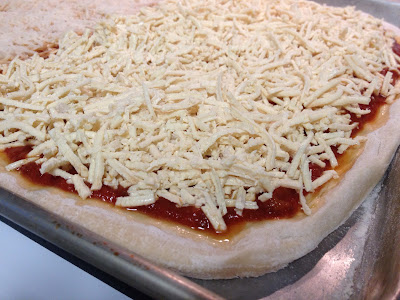 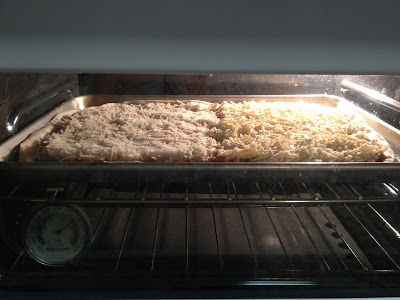 While I was waiting, I compared the ingredients; they were much more different than I had anticipated.
﻿


Then I noticed something interesting about the Trader Joe's cheese, "...do not microwave or freeze."  I don't know if you'll recall, but I'm all about microwaving and freezing my Daiya.  This could wind up being a deal-breaker. 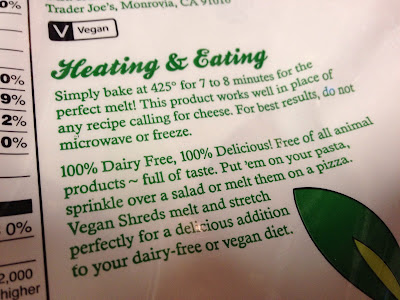 It was about then that I noticed my oven temp had independently risen to 550 degrees, and the Trader Joe's cheese was seriously bubbling.  The Daiya was just chillin' out, per usual.  I opened the oven door to bring the temperature back down to 450 and let it continue to cook. 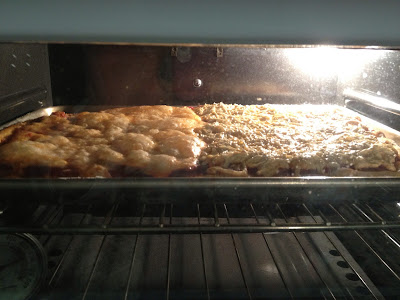 And then it was done!  It's been so long since I've seen a non-vegan pizza that I'm not really sure which side looks more authentic. 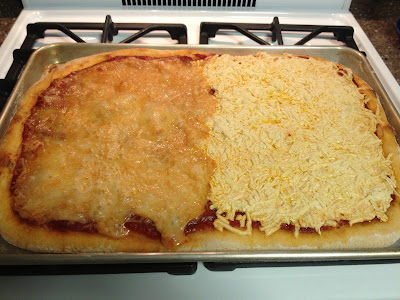 This was the TJ's side: it melted into a smooth layer of cheese. 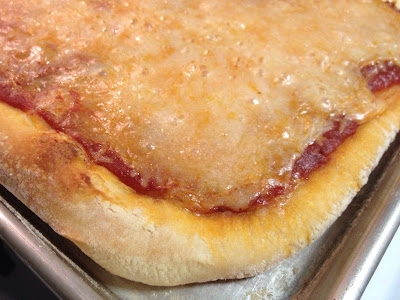 The Daiya side retained the appearance of shreds, but also melted into a layer of cheesy goodness. 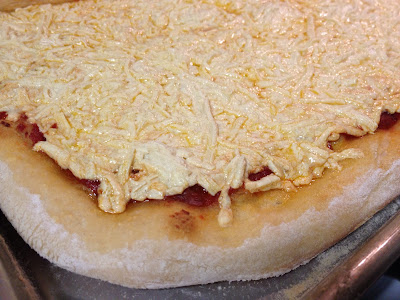 Even though I let the pizza cool in the pan for about ten minutes before cutting, the Trader's Joe's side was extremely oozy: to the point of being liquified.  I'm not sure if this had to do with the cooking temperature and/or duration, but the dough wouldn't have cooked through had I cooked it for any less time or at a lower temperature. 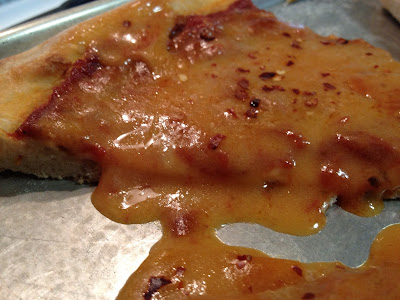 The Daiya slice was perfection- even though I'd actually over-cheesed (yes; this is really possible). 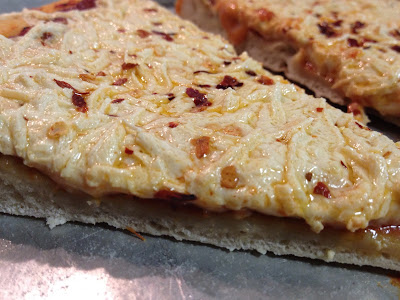 In no time I had a generous slice of each on a plate for munching testing. 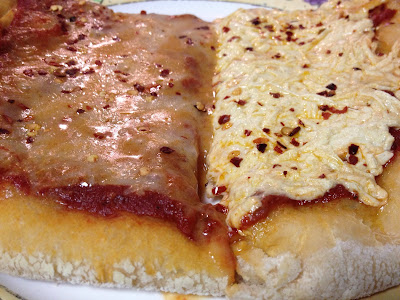 Should I start with the new? 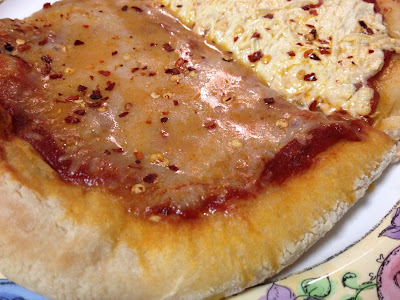 Or the tried and true? 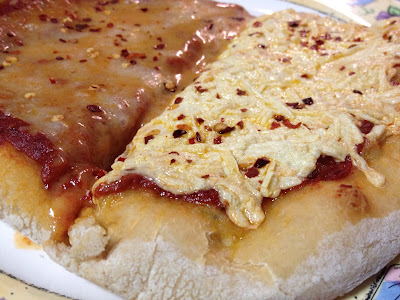 I don't even remember what I did; all I can tell you is that in no time I was in a pizza coma, sending photo texts and receiving drools in return.  As often happens, I'm sure there was a bit of what VM and I like to call the Ernie syndrome in full effect.  The whole thing was just delicious.

In order to prevent myself from eating the whole pie I decided it was a good idea to include the Esteemed Tasting Panel on the taste-testing of the leftovers (hooray for not eating everything at once!).  I probably ate more reheated pizza than fresh as a kid, and the reheated TJ's pizza looked exactly as I recall- even down to the burnt bits where the cheese oozed off the slice onto the pan. 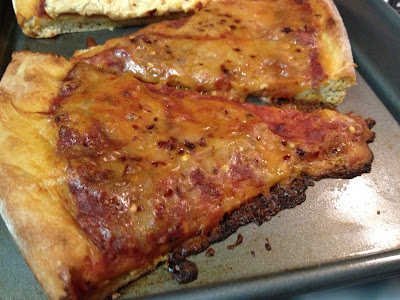 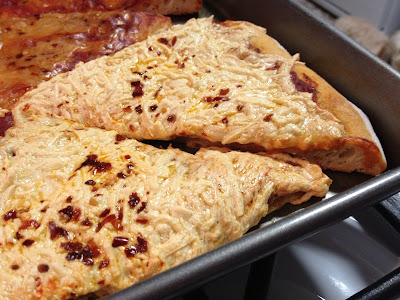 ﻿Both VM and OD were surprised by how much they enjoyed the TJ's pizza.  My sincere appreciation for it was unexpected as well.  But, the suggestion not to microwave or freeze makes it less convenient.  Also, I'm not sure how it would hold up in other Italian recipes where the extreme oozification could cause a dinner catastrophe.  We're all still huge fans of Daiya, but it's nice to know there's a totally different option available.  Obviously more testing is in order.

UPDATE 12/11/17: Someone recently pointed out in the comments that I never actually state much about the taste of the two and I re-read this post and realized they were absolutely right! As I replied, "I got all caught up in the meltiness and random jibber jabber and never really talked about how good or bad they each tasted. At this point, so many years later, I'm still eating Daiya instead of TJ's, so that probably answers the question of which I liked better. Sorry to disappoint." Hope that's helpful.
Posted by Abby Bean at 12:31 PM