The amazing Kittee from Cake Maker to the Stars did a great post (ok, they're all great) that revolved around a tour of her fabulous kitchen.  She encouraged others to do the same, and I've really been enjoying each of them; it's nice to see where all of your favorite bloggers whip up their masterpieces.  So, my turn; it's only fair that I reciprocate.

The main view.  It photographs better at night, but then you can't see the stained glass in the windows. 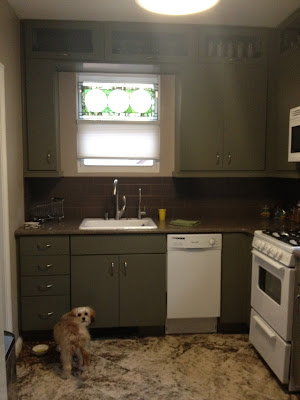 The other side- same photographic issue. 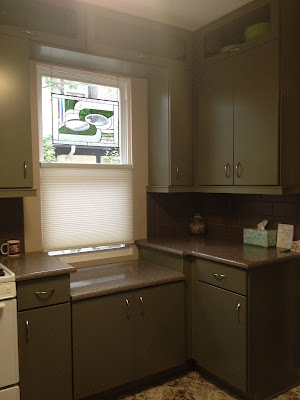 The last and most boring side (yes, it just works out that there are 3 sides, not four; it's that small). 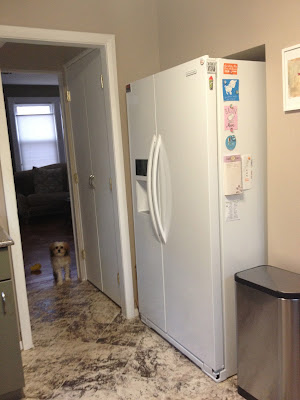 So, let's start from the top.  I have an awesome light that has fan blades nestled inside. 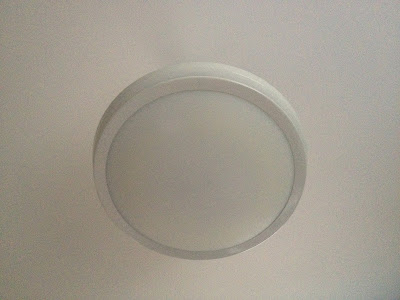 They only come out when the fan is on; otherwise you'd never suspect. 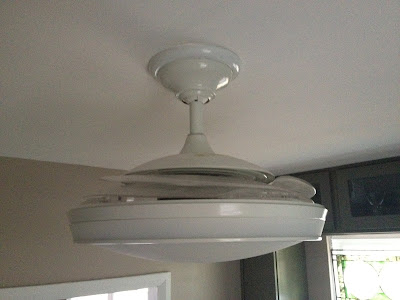 I have floor to ceiling cabinets, but the ones on the very top aren't full.  That's okay since I'm on the short side, but it's still nice to know that there's extra storage available- even though it's ideally intended for unused pretty things.  I like to use pretty things (mostly*), which forces me to regularly climb on the counter. 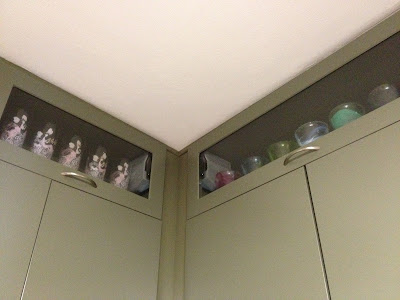 But, leave it to a good friend to spy your jello mold hanging out there! 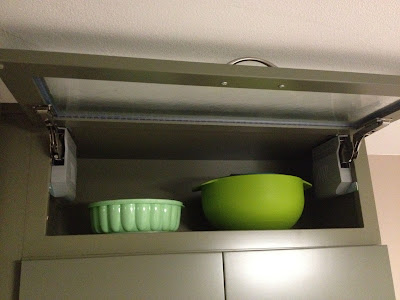 My counters are probably my favorite part of the whole kitchen.  They're quartz, so the pattern is evenly distributed with a few sparkly bits strewn about.  I use the fact that it's relatively busy to justify the fact that I clean it constantly; there could be a spill that I'm just not seeing.

This is my fruit wagon.  I generally keep bananas in it, but 89 likes them more than I do. 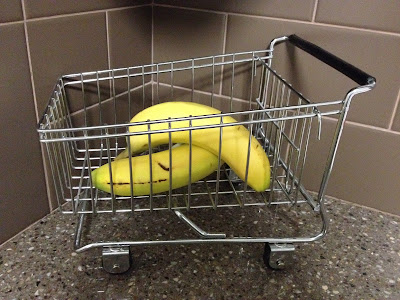 Speaking of 89, her cookies reside in my two favorite jars: Snoopy and Strawberry Shortcake. 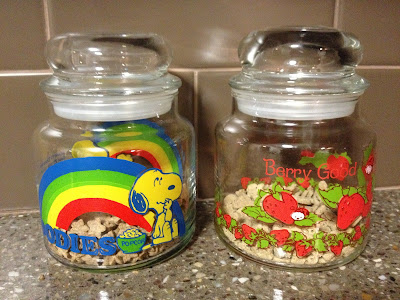 I'm not a collector by any means; in fact, I don't particularly like the idea of buying things just for the sake of having them.  I simply like these because they're from when I was a kid.  I still have my glasses in regular rotation too: Peanuts, Strawberry Shortcake, and Muppets! 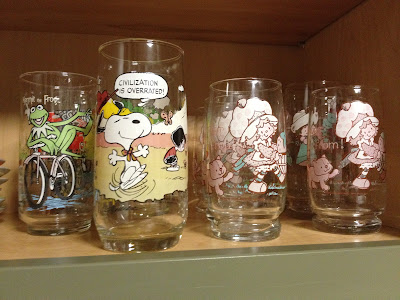 On the contrary, this is my favorite non-use* decorative towel.  It was a huge splurge from Anthropologie and I hide it whenever company comes over because I don't want them to assume it's usable.  Yes, that means that I basically just look at it. 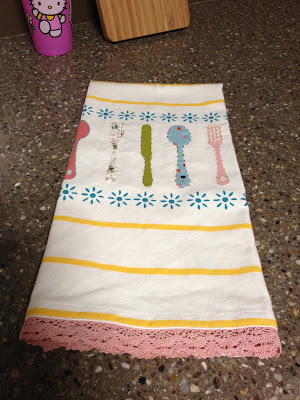 But, I do use towels- lots of them, in fact.  This is a cute one I use all the time! 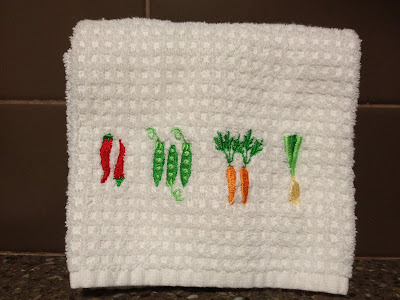 It's hard to talk about my kitchen without referencing the saga of how it came into existence.  I bought my house two years ago, and it was renovated for 11 months before I moved in.  In addition to the general malaise of having your house under construction, it's no fun when contractors buck your every suggestion- but that's what happened.  And that was just during the interviewing process!  But, I digress.  VM essentially masterminded the layout of my whole kitchen and it wound up coming together beautifully and with efficient design.  Not the least of which, my dropped counter that accomodates this huge window (one contractor suggested I seal up the window instead) and serves as a great area for prep, buffet-style serving, and a seat when you're having a morning bowl of eat and run cereal. 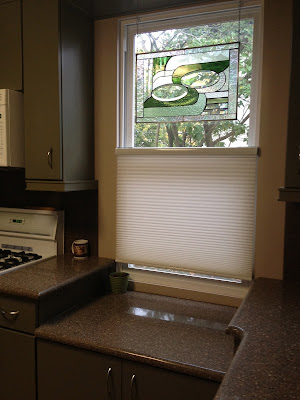 Small, but mighty: I have a mini-stove and dishwasher because the size of my kitchen could have only accomodated one regulation size without the other and it was a toss-up.  I kid!  My tiny stove also makes an awesome toaster so I don't have to have another appliance.

Of course, my toaster tongs. 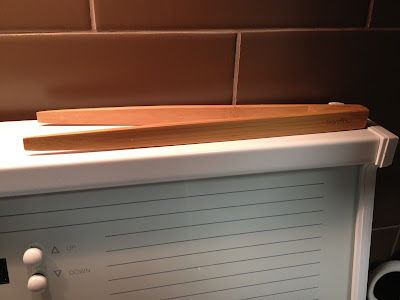 And the oven thermometer is essential. 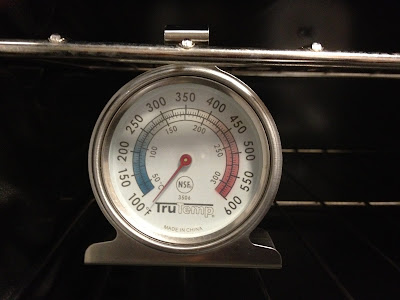 Part of my kitchen re-design included moving my refrigerator into the kitchen.  Yes, you heard right.  It originally resided in flux between the living room and kitchen- in a small alcove directly across from my side door that sits three steps down.  You know, so you could fall and only minorly hurt yourself while peering into the fridge.  That space is much better utilized by this awesome pantry that my dad built (and keeps stocked with Fruity Pebbles when prompted).  When the doors are closed you'd never know there were so many goodies lurking inside.

The standard contents of the fridge in question. 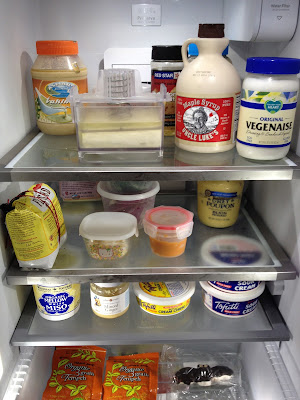 My condiments are more impressive. 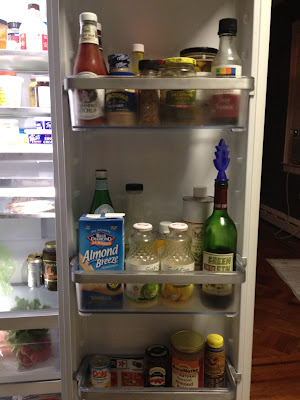 But not as exciting as my pantry hot sauce collection and back-stock. 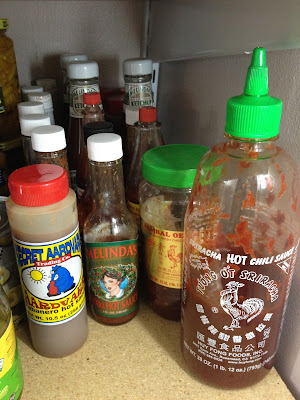 Kinda boring, my freezer if filled mostly with flour, 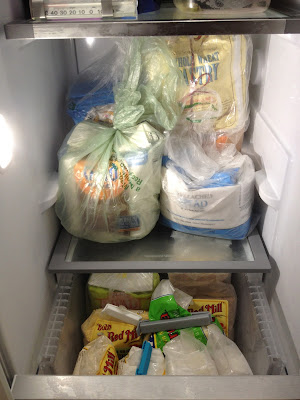 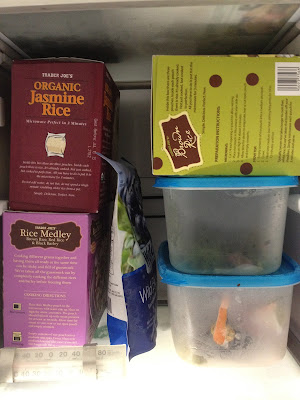 But there is also drawer filled with Daiya!  I like to stock up when it's on sale.  It freezes incredibly well and defrosts quickly in the fridge.  You never know when there might be a grilled cheese emergency. 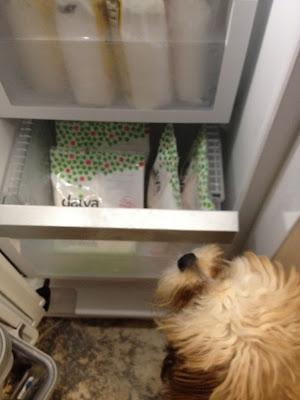 For a small kitchen, there are a lot of cabinets; my stuff has plenty of room to spread out!  Some highlights:

My illustrious Magic Bullet gets its own cabinet. 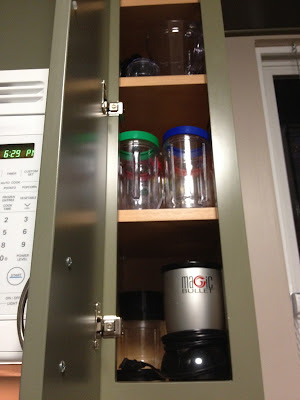 As does my hand-mixer, passed down from VM! 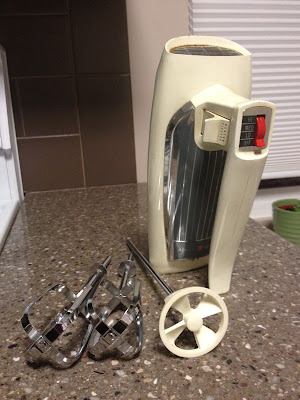 And then there are the drawers- filled with various, organized miscellany.  I won't bore you.

But this you'll like: my cookbooks!  While technically not in my kitchen, they visit frequently. 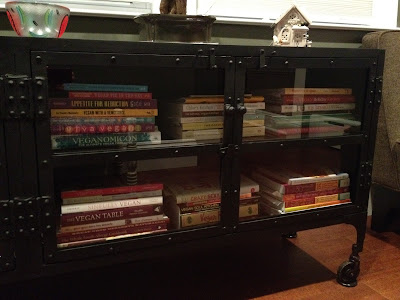 Finally, my most used items: my Tupperware cups, also from when I was a kid.  I drink a lot of water and there's always one of these floating around the house.

Since my kitchen is small, there's only an eat-in area for one. 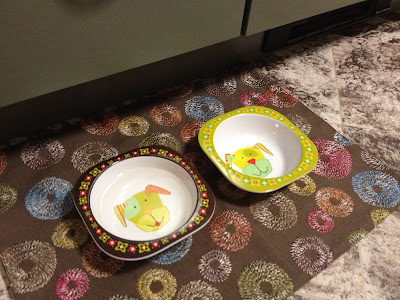 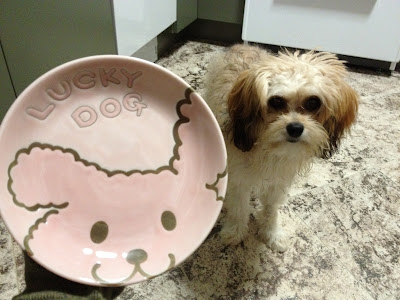 Well, we started at the top and made our way to the bottom- my floor.  The dark pattern you see is actually metal within the tile.  It looks awesome, even if it is a bit chilly during the colder months.

Thank you for visiting my kitchen and happy MoFo!