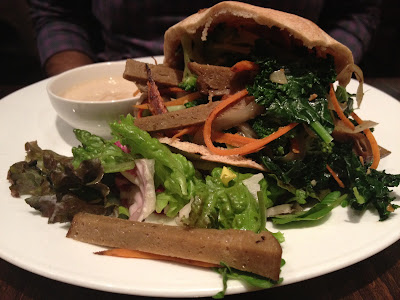 Much to the pleasure of two of my healthier friends, I agreed to go to Souen SoHo one day last year when I wasn't feeling particularly like myself was craving healthy food.  I'd been forewarned that there was fish on the menu, but aside from that it was nothing like I expected; I ordered the macro plate because nothing else piqued my interest.  I'd never before purposely eaten macrobiotic food; I assume it's just boring by nature.  So, other than discovering that I really don't like hijiki seaweed, I had nothing significantly good or bad to report; I didn't blog it.  Ok, I'll admit that the restroom sink was cool even though the dining room itself was nondescript at best, but really- that was it.  In any event, I assumed I'd try it again and then have a better sense of my opinion, but it turned out that I really had no urge to return.  Months and months later one of the same friends suggested we visit his favorite Souen: Union Square.  When I saw that they had an A things were looking up! 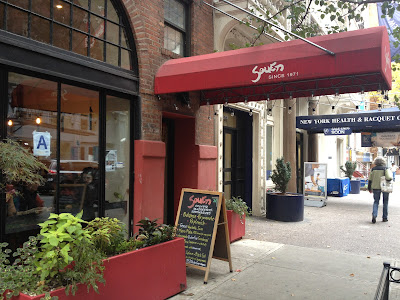 The modern dining room was packed: both the sushi bar and two floors of tables.  I distinctly smelled the fish, but my table mate disagreed (it could have been mind over matter?).  The menu again surprised me- nothing stood out as being extraordinarily appealing.  Although it was very cold outside, it was quite hot in the restaurant- so I decided to focus on something cool.  I skipped the generic vegetable sushi because now I'm spoiled, but I found this appealing on the lunch sandwich menu: stuffed tofu pita: whole wheat pita bread stuffed with homemade baked tofu, avocado, cucumbers, carrot, sprout, onion, and tofu dill mustard sauce. 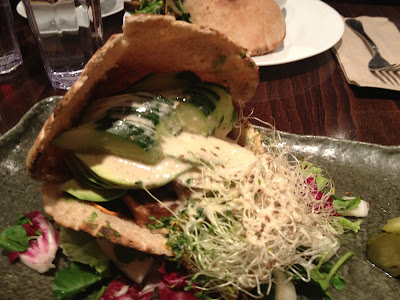 The service was supremely slow, but the sammie was really good.  Fresh, tasty, and well-proportioned; my only complaints were that it was overly dressed and impossible to eat without utensils.  However, the pickles that it came with were delicious enough that I was able to easily overlook this minor infraction.

My pal also ordered from the sandwiches: seitan vegetable gyro: whole wheat pita bread stuffed with sautéed seitan, broccoli, green, carrot, and onion in olive oil and garlic, topped with tofu dill teriyaki sauce.  This looked really appetizing and it was reported that it was delicious.  I didn't try it; I'm very finicky with seitan, but I was also still too hot for warm food.

His lentil soup also received the thumbs up. 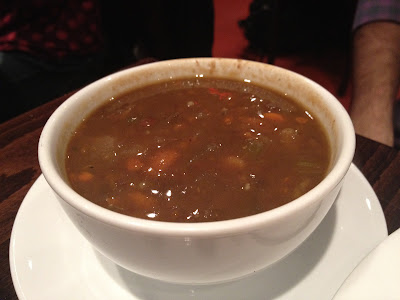 Souen Union Square was definitely a vast improvement over Soho.  I'd prefer not to eat where animals are served, but now that foodfeud has raved about the East Village location, I'll probably complete the trifecta.
Posted by Abby Bean at 7:41 AM