A couple of months ago, Vega generously put out a call to bloggers offering samples of their Shake & Go Smoothies.  Since I've been toying with the idea of a short-term juice fast, I thought this might point me in the right direction and I took them up on it.  I was impressed to receive a 5-pack assortment of varying flavors and thrilled to see that the directions were simple: "Just add water, shake, and go!"  Since I have water, my measly muscles are capable of shaking, and I really do have to go (to work every morning), this sounded just right; being healthy ain't so hard after all ;-) 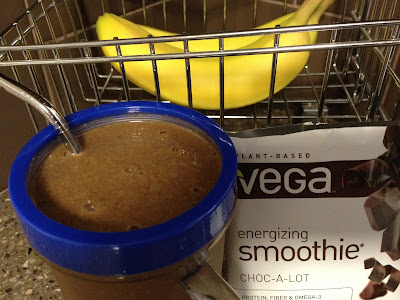 I decided to start with the tropical tango flavor because I rarely keep orange juice in the house and I really miss the citrus.  It was suggested to me that I actually mix the Vega with orange juice, but I didn't have any (see above).  I wasn't too disappointed since I really wanted to try the product exactly as intended;  an additional element would have both defeated the convenience aspect and affected the taste. 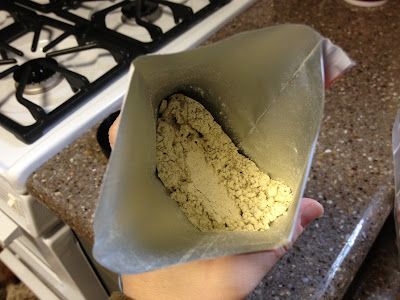 I was surprised that the powder smelled like Hi-C, but the green-tinged orange color of the mix allayed any concerns that it might taste the same.  I vigorously shook the contents of the package with ice water in a lidded Magic Bullet mug, but could see unappetizing bits of green on the sides of the cup and collecting on the bottom; I was afraid to try it.  Thanks to No Meat Athlete's suggestion, I quickly added about a dozen small ice cubes, gave it another shake, and headed off to work. 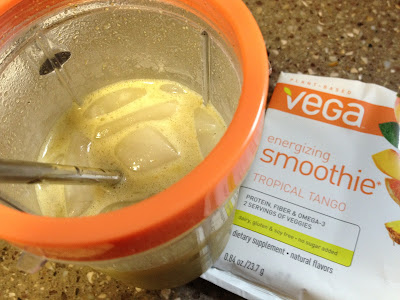 I'll admit that I feared it might taste like Tang (which I never liked), but it was much too thick to even be compared.  After two small sips I had to add some extra water to dilute it.  That seemed to thin it out, but although the powder was no longer visible, it was still discernable between my teeth.  I did manage to drink the whole thing and may have even felt a little bright-eyed as a result- albeit slightly nauseous.  A large glass of water was in order to wash it all down.

I had every intention of trying the chocolate next, but punked out and went with the vanilla almondilla (like godzilla?).  The mix smelled unpleasant, but once it was shaken with 1 1/2 cups water and 1 cup ice, the smell inexplicably transformed into something dinstinctly almond.  The hue, however, was decidedly green. 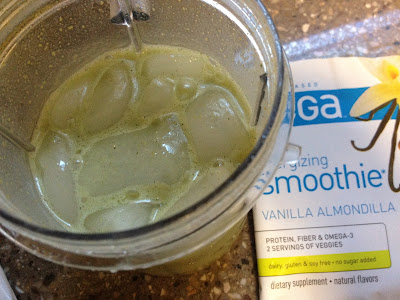 Despite the unappealling color, I do think this flavor was better.  Unfortunately, I was still left unsettled by the consistency- which is that of a watery smoothie, but with a bit of chalkiness.  It did fill me up, but I had to have a few pretzels an hour later to get the taste out of my mouth cleanse my palate.

The next day I decided that I would really try the chocolate flavor; it was go big or go home time.  Best case scenario?  Yoo-Hoo.  Worst case?  Well... 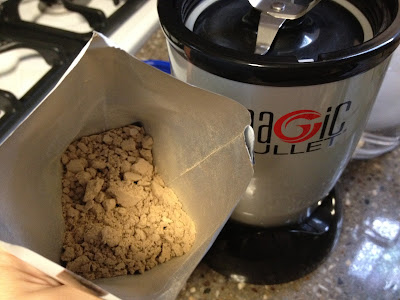 I admit that I wussed out and didn't just shake and go this time.  Instead, I mixed it up- smoothie style, with a banana and lots of ice; this was the best of the bunch!  I'm not saying it was a chocolate shake, but it was a relatively outstanding chocolate smoothie- and that's saying a lot.  Mixing it with the water, fruit, and ice absolutely solved the problem I was having with consistency.

I've yet to try the remaining flavors: raspberry and plain, since I think I'd prefer to just stock up on the chocolate for now. 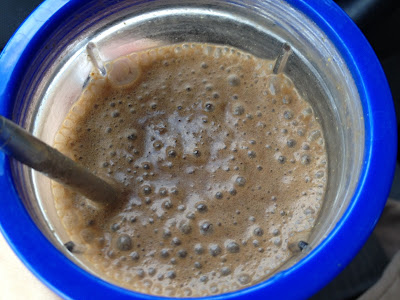 But, I think it's safe to assume that if I enjoyed the chocolate, those of you who normally enjoy fruit smoothies may enjoy those flavors much more than I did; give them a try and see for yourself. 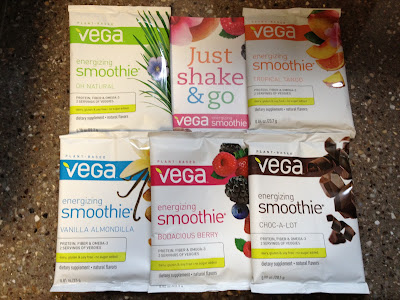 Thanks to Vega for sending me the samples to review; I would recommend the Vega Shake and Go Smoothies as a great way to get your nutrients when you're on the go, but I'd definitely add fruit and ice for improved taste and texture.
Posted by Abby Bean at 8:24 AM